Lucky again. My search for exceptional images has uncovered four more gems in KLM’s historical archive. The more you look, the more you see, and a story emerges. Take a look at the pictures below.

A sporty director is good for a company’s reputation. Today, we jog and run marathons, but jogging has only been around for about 40 years. In Plesman’s day you didn’t hit the road for a run – sprinting along the street, with no public transport in sight, just attracted suspicion. People tended to take to sports fields or tennis courts.

KLM had a tennis club even before World War II, from 1928 in fact, which was given the name Aeronauten in the spring of 1947. And Plesman was there, playing on gravel courts with a wooden, Dunlop Maxply racket. Gut-strung, of course.

They couldn’t play in the rain, because the strings sagged. The gravel turned the white tennis balls a little orange. A small, wooden club house, probably green, can be seen in the background. A refined audience watches the game, applauding politely when a point is scored. Civilised sport. 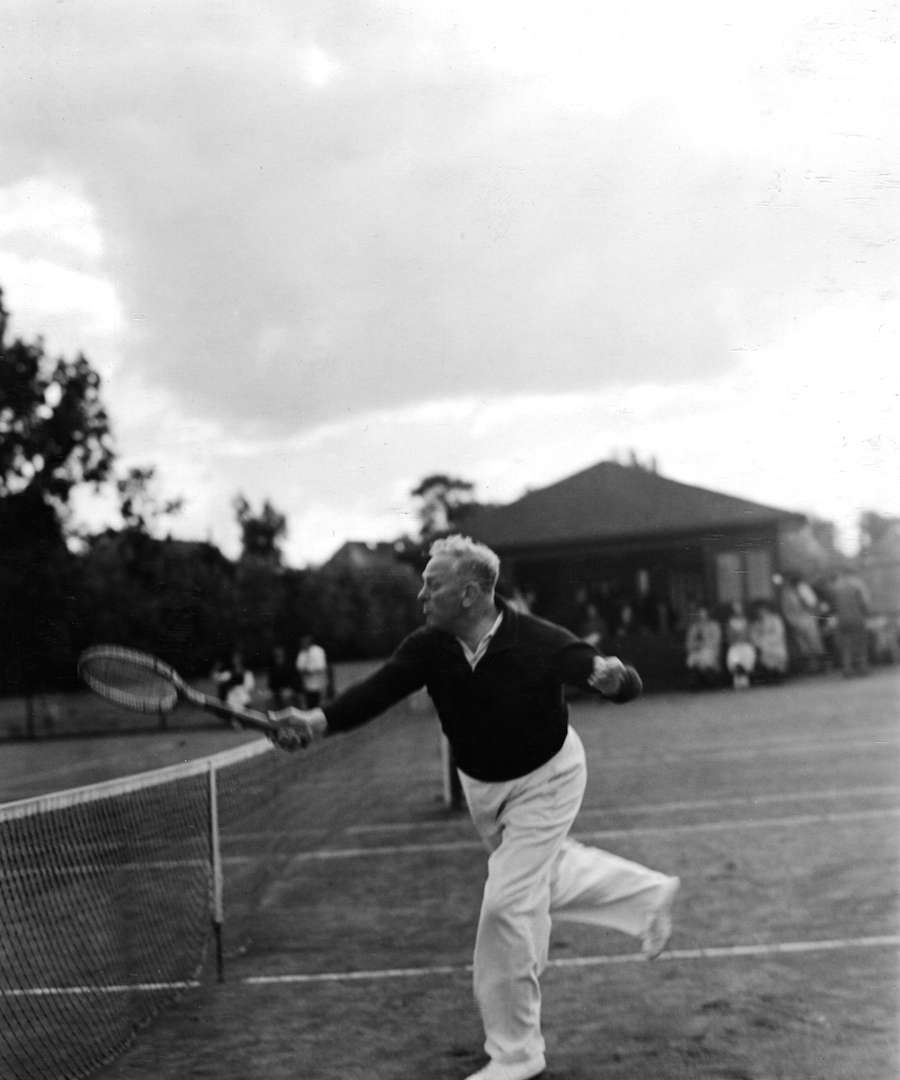 Above the North Sea, on 13 October, 1950, four fashion mannequins presented creations by the fashion designer, Herbert Sidon, whose origins were Austrian. A star in his day, he dressed the likes of Marlène Dietrich and had the honour of enveloping Queen Emma and Princess Beatrix in his creations.

In a Convair between London and Schiphol, Barbara, Jean, Christine and Molly paraded elegant dresses, coats, and hats, even a wedding dress, before the passengers, who, on this flight, didn’t gaze out of the windows, but kept their eyes fixed firmly on the view inside.

In the photograph we see Jean Lodge, a famous British actor. She is presenting creation number 5. The handwritten number rather detracts from the elegance of her attire. I’m not au fait with the correct terminology to describe what she is wearing, but it is pretty. This is, of course, not something you see everyday. 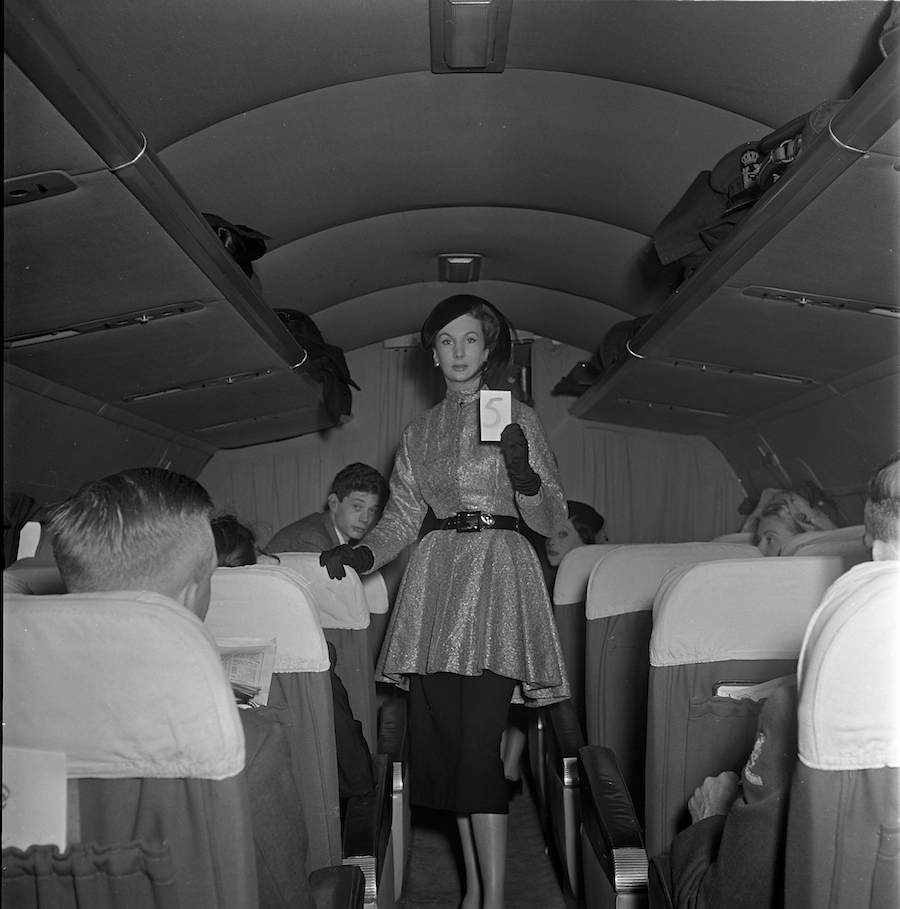 That Constellations and cows go together is apparent from this image. But what, in fact, am I looking at? An aircraft in a Dutch landscape – but what are the cows doing there? The photographer has made nifty use of the lack of depth of field, so that it looks as if the aircraft is in the meadow. The people on the left of the picture don’t seem at all perturbed – they don’t spare Constellation L-749 “Utrecht” a second glance.

In the right of the background is a lovely view of Schiphol, as it was in the early fifties. Some additional information, for the connoisseurs among you: The tall spire in the distance is the Catholic church in the village of Bovenkerk, which is now part of Amstelveen. The spire on the left is in Amstelveen, opposite where KLM’s head office was later built.

I can see it now from my desk. In those days, there were just meadows and cows, as we can see in the picture. And this is what makes the image special: the cows and the Constellation are standing more or less where the Kaagbaan runway now runs. But here, in the photo, there’s just open space and grass and relative quiet. I find this really hard to imagine now. 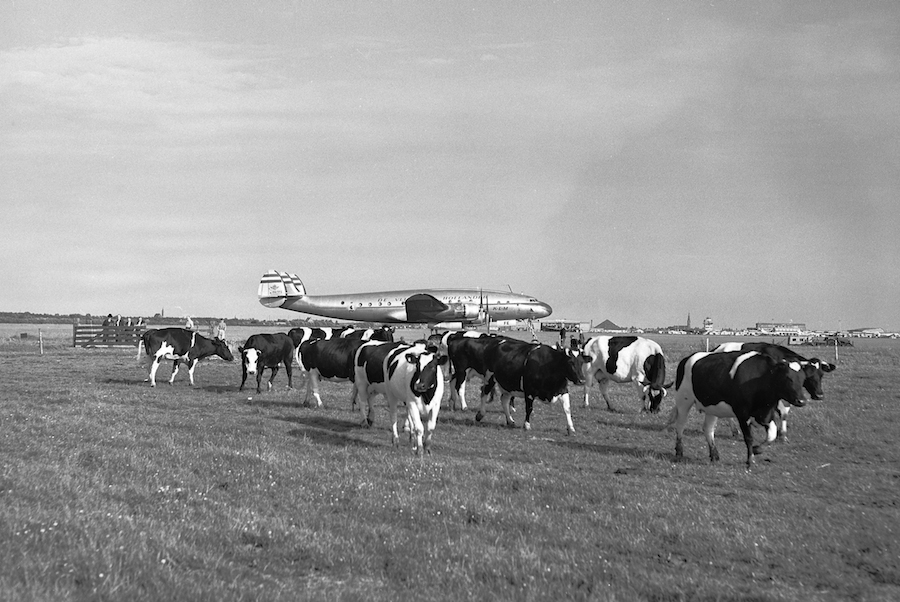 Happy crew on a machine that for decades was a massively popular mode of transport in the Netherlands: the Solex. Originally made in France, the Solex is a kind of bicycle with a small, 0.4 hp engine on the front wheel. It turned out to be a huge success; tens of thousands were sold. There were – and still are! – Solex clubs and even a Solex anthem, to strengthen the group identity. (“On a Solex, on a Solex, you sit like a millionaire. Just jump up onto the saddle and ride without turning a peddle…”) A Solex unites, clearly.

In 1950, Schiphol was the final destination for a huge Solex rally. From 11 points on a radius of 60 km around the airport, a total of 1,100 participants drove to Schiphol, passing various compulsory checkpoints on their way. A real rally. The finish was a hangar at Schiphol. It must have been packed, with 1,100 of those spluttering engines. We won’t mention the air pollution. 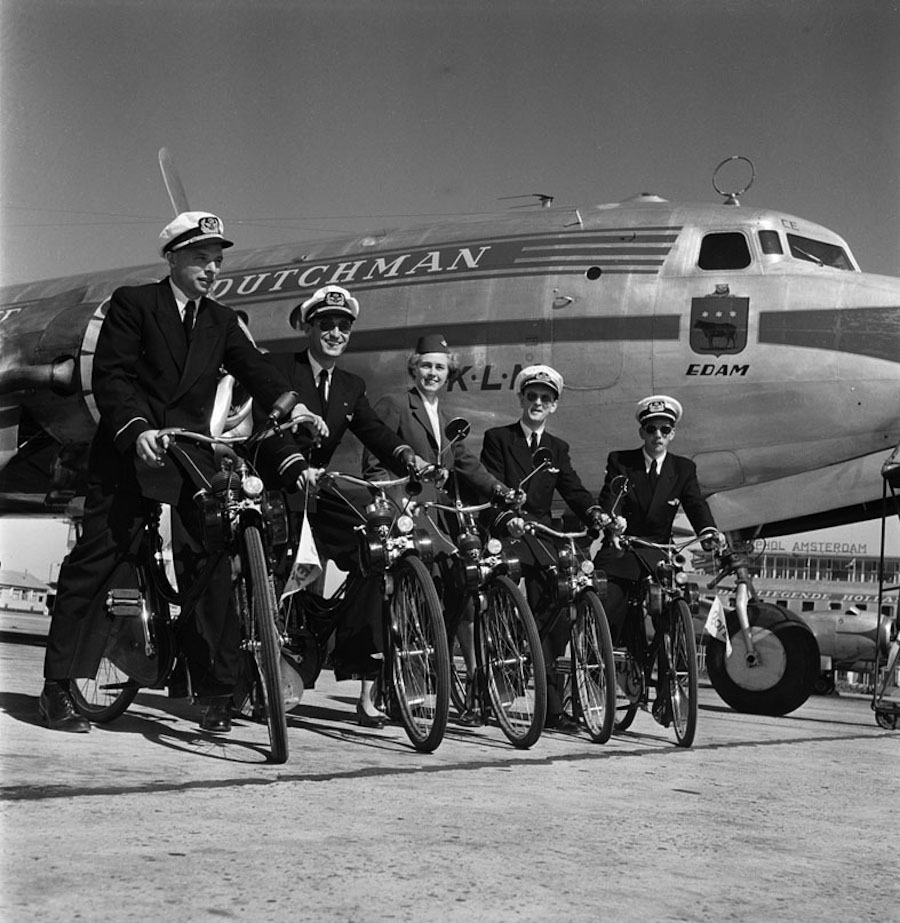