This is part 2 of ‘How Does One Get a Piece of History Airborne?’. Follow me on my journey to get the Grand Old Lady back in the sky. Let me tell you what it takes to restore a Douglas DC-4.

The DC-4 was a big plane in her day, though “big” today is more likely to mean a Boeing 747 – the cabin of the DC-4 is similar in size to the 747’s upper deck. The DC-4 might be considerably smaller than the 747, but it’ll still take quite some effort to bring our DC-4 back to life. Maintenance on an aircraft of her age, after so many years in a museum, takes quite some planning. 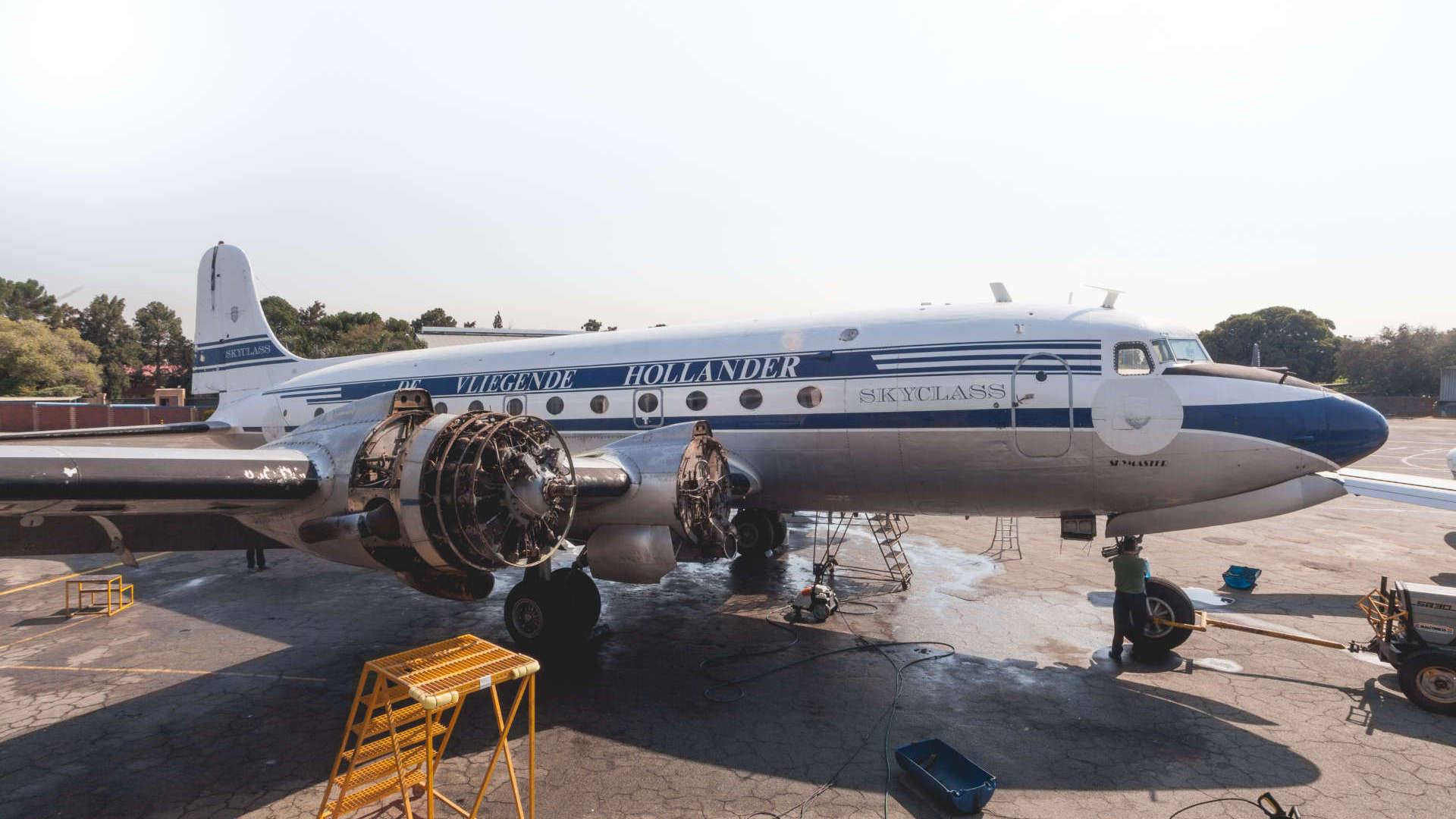 The aircraft will first receive a D-check, one of the most thorough inspections there is. Aircraft have small doors all over the place, which have to be opened in preparation for the inspection. This entails undoing numerous little screws. Elsewhere engine covers, plates, even the entire cabin, are removed, so that we can look under the floor. The flight controls, the moveable parts of the wing that are used to steer the aircraft, all have to be removed as well. 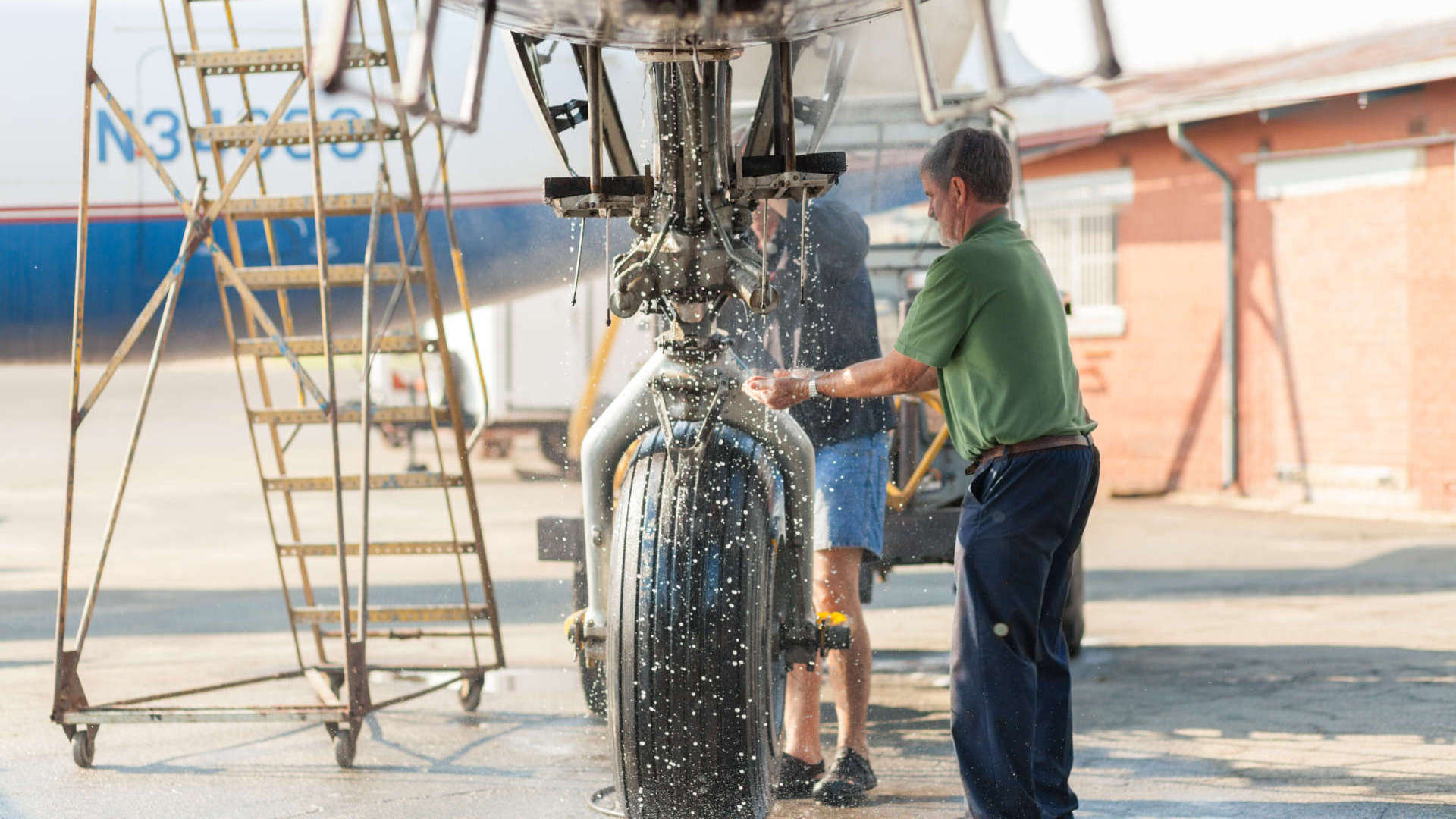 Once the entire aircraft has been opened up, it is time to meticulously inspect every part and every system of the DC-4. Through the inspection doors we can check the structure, wires, cables, and the hydraulic and fuel pumps. The whole airframe is inspected for corrosion. The four propellers are removed and put through an X-ray machine to look for small cracks. Even the engines are removed and sent to a special inspection workshop. 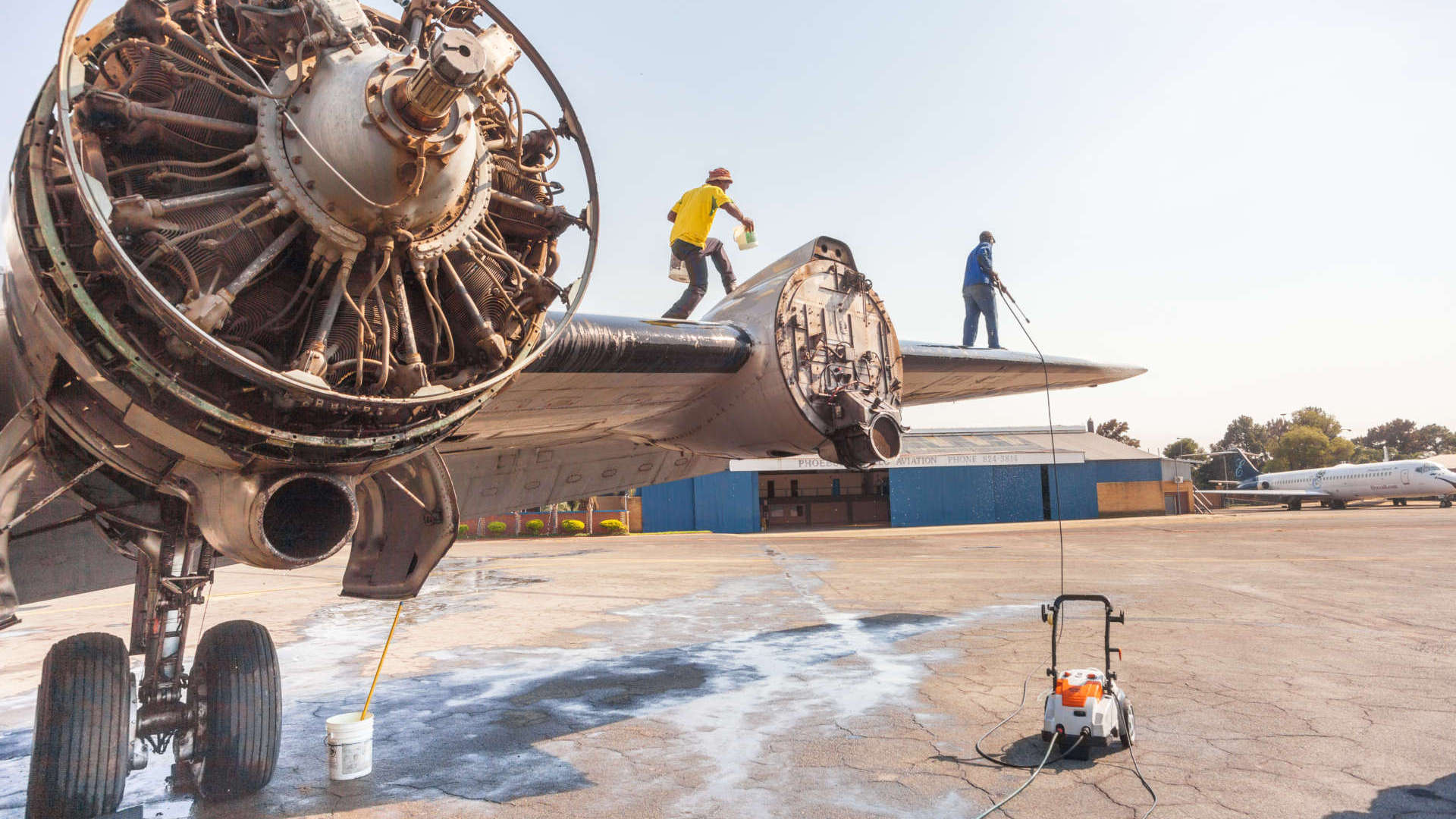 Just like when you take your car to the garage, we always expect to find some issues during the inspection. An aircraft also has components that are only allowed to be used for a predetermined length of time. This means we have to replace any parts that are due for replacement and repair any damage that is discovered during the inspection. Most parts can be repaired, but those that can’t be are replaced. And if we find corrosion in the fuselage, we get the sheet-metal repairmen to come and replace the damaged sheets. 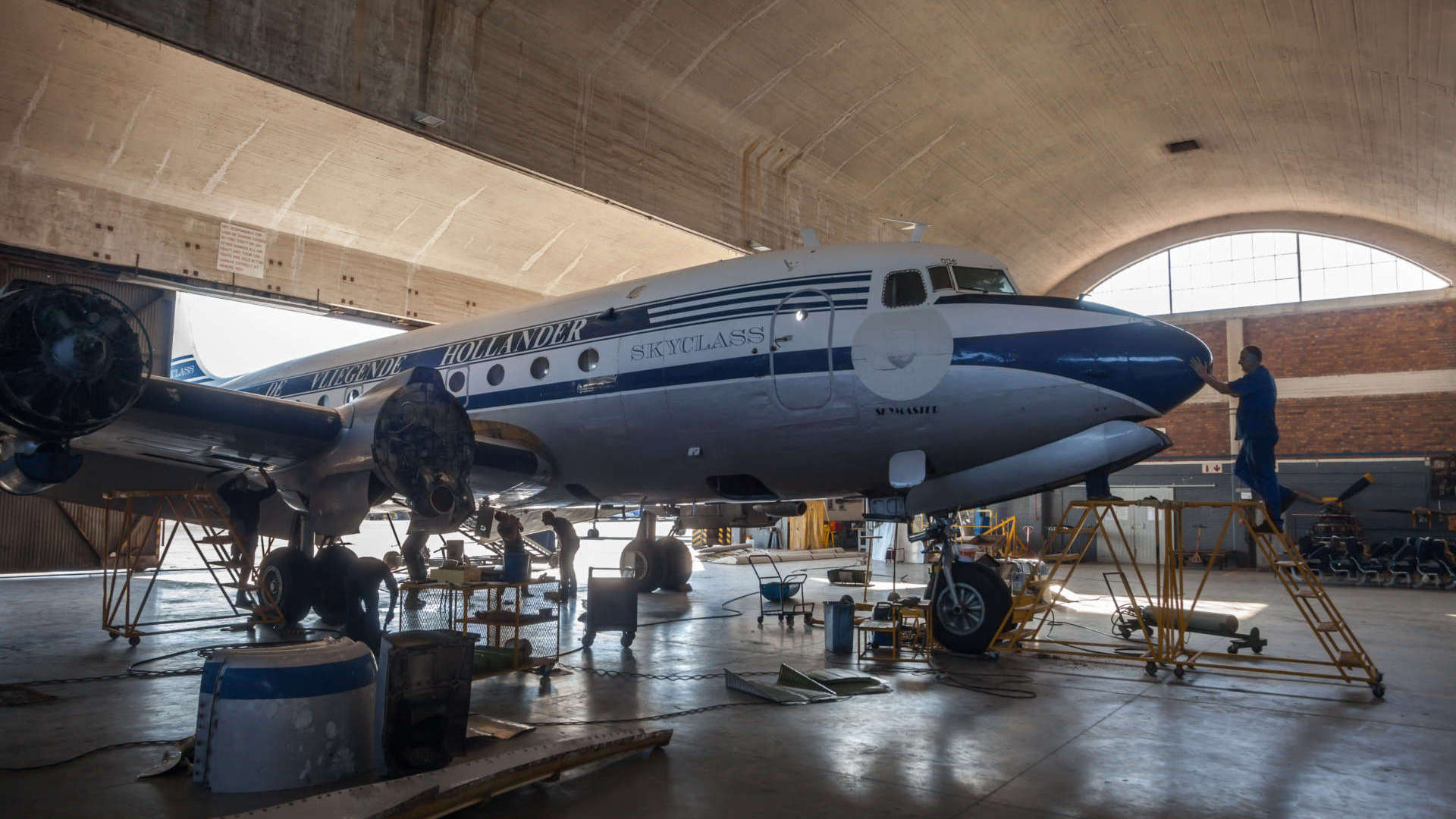 Our DC-4 has not been flown for about 10 years. Aviation as an industry is changing all the time, either because new insights lead to new requirements, or because regulations change to cater for the growth in air travel. The final step will be to modify all the aircraft’s systems so that they meet the latest aviation standards. The pilots’ radios use similar frequencies to the FM radios in our cars, for example. Capacity can be increased by reducing the spaces between frequencies, which triples the number of available frequencies. Our DC-4’s radio will therefore have to be replaced. GPS is also becoming more and more important in the world of aviation, so we will want to be able to navigate by GPS too. This will require installing new antennas and computers. 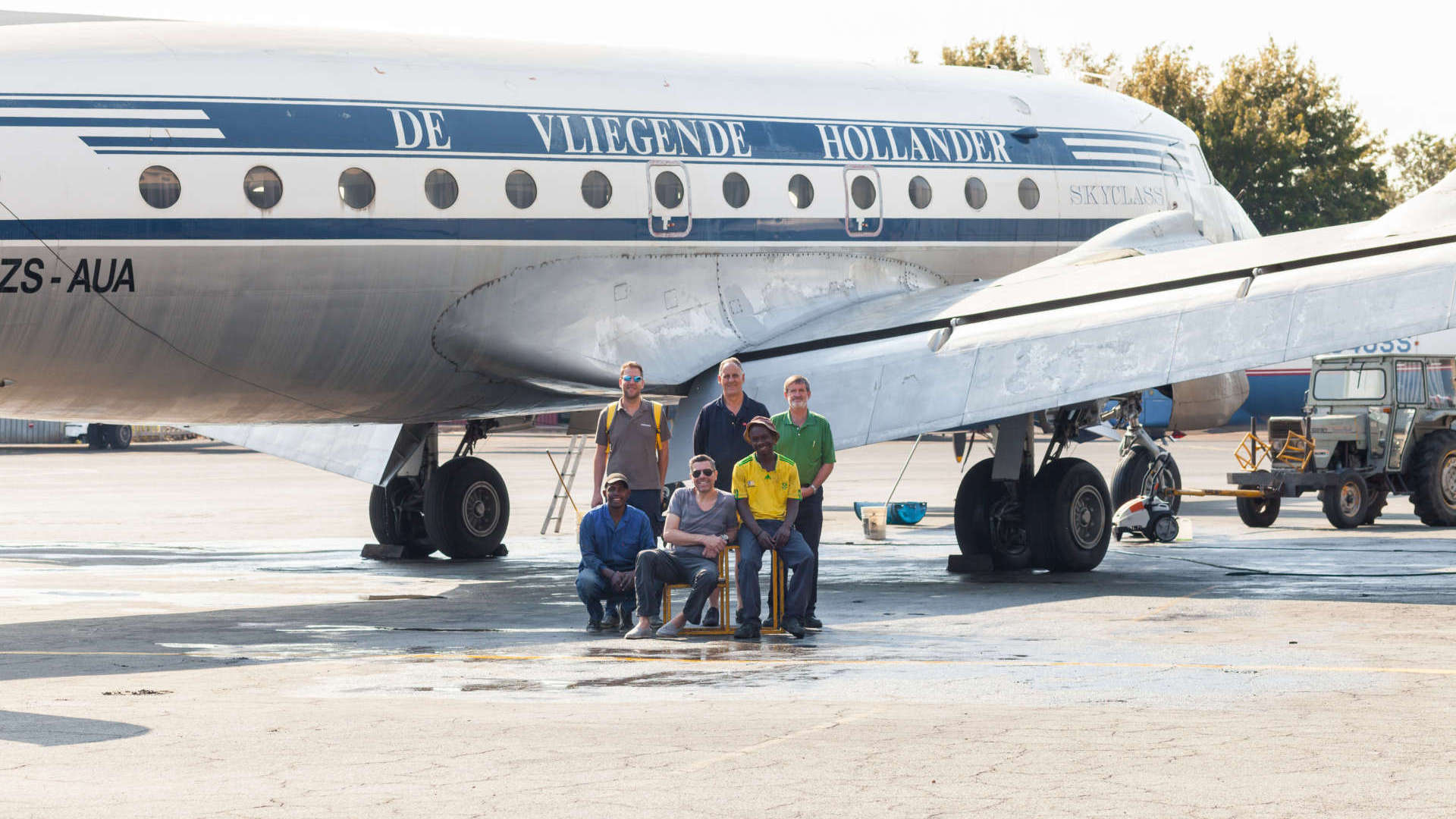 I hope this has given you some understanding of the planning that Skymaster’s restoration requires. For this task we have Jurriaan. He is a genius in bringing together modern aviation regulations with lessons learned on historic aircraft. He is in charge of the return to airworthiness programme. His maintenance programme is carried out with the help of François, Martin and Patrick. They work at Skyclass, a company that also operates DC-4s and which is generously helping us. We are also sending volunteers to South Africa, to learn from the people at Skyclass and to help with the work. Theo, our flight engineer instructor, is teaching Derk, our apprentice flight engineer, the tricks of the trade. And François is working with Erwin, our Dutch ground engineer.

With our team working hard to open up, inspect, repair and modify our iconic DC-4 Skymaster, I hope the Flying Dutchman Foundation will see her back in the air in the summer!

Want to stay updated about this project? Follow us on www.facebook.com/flyingdutchmanfoundation.