Last week I boldly suggested that Warsaw might increase its popularity in the English-speaking world if it began using the less violent and more romantic name Varszawa. This is not only a closer approximation of the city’s real name in Polish, but it also hints at the romantic legend of the mermaid who graces the city’s coat of arms.

This week I will be offering unsolicited advice to the municipal council of the Malaysian capital Kuala Lumpur, whose name conjures up images of a deep-fried delicacy with a rather cute, Australian marsupial as its main ingredient. A “lumpia” is a spring roll, so this is what I see whenever I read or hear “Koala Lumpia”: 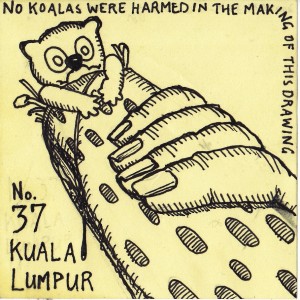 The time has come to set the record straight and to erase this horrific image from my mind forever. Not only because it is unfair to the Malaysian people, but also because I may be flying to Australia via Kuala Lumpur in the near future, and I don’t enjoy wearing the wig and beard and sunglasses when I’m travelling long distance.

Having plumbed the darkest depths of Cyberia (read: I visited no fewer than four different sites), I discovered that the people of Kuala Lumpur have solved the “problem” of their city’s name for me. Many locals call the city “KL” and refer to themselves as “KL-ites”. Visitors to the city are likely to hear them doing so in English, because English is not only a compulsory language at schools, but also the standard language of instruction for mathematics and the natural sciences. (Thank you Wikipedia.)

I also learned that Kuala Lumpur means “muddy confluence”, because it is located at the point where the Rivers Gombak (previously Lumpur) and Klang come together. Muddy Confluence is not a happy name, KL-ites, but it is topographically accurate and the product of a bygone age in which our unimaginative ancestors had yet to invent the concept of “city branding”. Other sad examples include: Little Rock (Arkansas), Grand Rapids (Michigan), New York (formerly New Amsterdam), and Amsterdam, my hometown, which literally means “Dam on the Amstel (River)”.

The thing that intrigued me most about Kuala Lumpur is that it bears remarkable similarities to Johannesburg, where I grew up. Both cities started out as mining towns established towards the end of the 1800s, when the world’s colonial powers where in a race for raw materials, wealth and dominance. Kuala Lumpur was built on tin and Johannesburg on gold, but the commercial centres that emerged share a very similar spirit of entrepreneurship, where the pursuit of wealth is coupled with an almost rabid desire to shop, shop, shop.

Naturally, I searched the length and breadth of Cyberia (guided by the search phrase “Interesting facts about Kuala Lumpur”) in an attempt to counterbalance this rather one-sided view of the city. But I kept getting the same advice: shop, eat, shop, go up high tower, shop, eat, visit museum/mosque/palace, shop, go up high tower, shop. Which is what visitors are advised to do in Johannesburg, with the possible difference: “shop, then hide up high tower and eat”.

That said, I hope some proud KL-ites will do me the favour of revealing some of their city’s secrets, and that you will treat me gently if you catch me shuffling through your airport in my wig, beard and sunglasses.