Our Dutch ancestors really were quite ruthless in their quest for new lands and wealth beyond the horizon. Their conquests to the east and south and west still echo to this day in the bonds between the Netherlands and its former colonies. My father, born in 1919, grew up in Indonesia and eventually returned to Holland from the east in 1957 with the last remaining colonists. I myself grew up in South Africa and was the envy of my English-speaking classmates because I never had to study for a test in Afrikaans, which bears a close resemblance to Dutch, the language my parents used when scolding us.

When it comes to the former Dutch colonies in the west, however, I am more ignorant. Here’s what I know: I have friends whose parents came from Suriname, the former Dutch colony in South America which gained independence in 1975. Family and friends have worked in the capital Paramaribo, and my wife is usually quite thrilled when PBM pops up on her flight schedule. She also enjoys flying to the island of Curacao, which I know is located in the Caribbean somewhere between the Netherlands and Suriname.

Curacao is actually a country within the Kingdom of the Netherlands, much like England, Scotland, Wales and Northern Ireland are countries within the United Kingdom. This island is – or was, politics being what they are – one of the Netherlands Antilles, which I always imagined to be a tightly grouped atoll of larger and smaller islands. I blame pirate movies for this misapprehension and I apologise to Antilleans for haphazardly shifting their islands across my mind’s map like a deranged rear admiral.

But perhaps my scheme is a little too simple. I know I would not like to be referred to as a Beneluxan and I suspect Antilleans feel much the same. So I have decided to focus on just one island – Curacao – and discover what makes it special and what sets it apart from the other islands. I have chosen Curacao for the simple reason that my friend Aliefka was born on the island and later returned to work there after trotting the globe. Perhaps she could help answer some of my questions.

“The more you know, the less you understand – that pretty much sums up Curacao for me,” she begins, making my heart sink swiftly into the azure waters of the Caribbean. “The island has a highly complex cultural identity, with at least forty different cultures living side by side. The island’s original inhabitants, the Arawak people, fled to Aruba and Venezuela when the first Dutch settlers arrived on Curacao.”

“500 years on, the island is still struggling with its identity,” Aliefka continues. “Afro-Curacaoans have strong ties to the island because their ancestors were among the earliest inhabitants. But the Jewish community has also been around since 1651. Their synagogue is the oldest in the Americas. And then there are the Dutch and the Hindu Indians and the Chinese, the Colombians, the Venezuelans and every kind of mixture you can imagine!”

But is there some common denominator, a communal passion or pride? “Definitely,” says Aliefka. “Everyone is proud of the fact that Curacao has been a safe haven for so long. And everyone loves carnival. And let’s not forget the annual Tumba festival, which originated centuries ago when slaves weren’t allowed to play musical instruments and sang their troubles and angers away, accompanied by spades and rakes and anything else that made music.”

That said, I think I’ll try to score a cheap seat next time my wife flies to Curacao. I need to check Aliefka’s facts and whether my wife is right about the great cuisine and climate and cocktails.

(Aliefka Bijlsma is a screenwriter and author. Her latest novel in Dutch, ‘Mede namens mijn vrouw’, is published by Augustus. Her first novel ‘Gezandstraald’ is set in Curacao.) 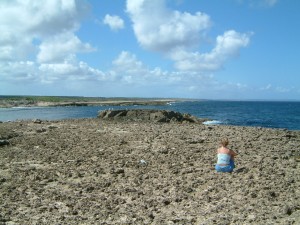 Aliefka at Watamula, the limestone “lungs of Curacao”, her favourite spot on the island.