Probably the last thing I expected to encounter in Bergen was a large group of very young, very rowdy pimps and prostitutes singing their way through the town’s bustling and beautiful harbour, where cruise ships rub shoulders with fishing boats along the busy wharf.

Before I had time to fully fathom this unusual cultural phenomenon, I found myself amid a group of youngsters in their dressing gowns, who looked as if they had accidentally taken a wrong turn on their way to the bathroom. They were being shadowed by the FBI, closely followed by youngsters wearing headbands and fluorescent tank tops, victims of an unfortunate 80s time warp, who were being stalked by the noisiest group of mimes I have ever seen.

Lest you conclude that the spectacular Norwegian scenery and the country’s almost equally spectacular prices have driven me mad, allow me to explain that the fancy-dressed groups were students on their way to see Rihanna in concert at Bergenhus Festning, the ancient fort that guards the entrance to the port, where my kids spent an hour trying to catch a glimpse of the singer and her band as they did their sound check in the sun. 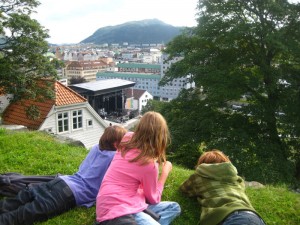 “I think she’s the little one in the grey hoodie.”

Naturally, the students’ display of youthful exuberance brought to mind the recent tragedy on the island of Utøya, near Oslo. The colourful parade reaffirmed my faith in the resilience of the human spirit and prompted my 12-year-old son to inform me that he intends to study in Bergen. (“So what if it’s the rainiest city in Europe.”) It was also a sharp reminder that such rare and unusual experiences are hard to come by when engaging in desk-chair travel, which has been my preferred mode since I started writing this blog.

Because the maximum speed limit in Norway is 80 km/h, I had plenty of time to think this over while I was driving. Unfortunately, I was unable to write down any of my brilliant ideas, because I had to use one hand to steer and the other to stop my jaw from dropping at the sight of epic vistas, shimmering fjords, colourful villages and brightly polished eighteen-wheelers that seemed to be waiting around every rugged corner to leap out at distracted tourists in their flimsy station wagons.

Upon returning home last week, I immediately subjected my brain to various kinds of torture (including daytime television) in an attempt to extract the ideas I had entrusted to it. It eventually cracked and revealed several new features, including a rather ambitious alphabetical world tour and a series that attempts to answer the age-old question: Does the whole world hate Tuesdays? I hope to elaborate on these in the coming weeks.

That said, I’d like to thank the people of Norway for a truly wonderful and inspirational holiday, and for reminding me that there is no substitute for first-hand experience when it comes to travel writing.