Working on an aircraft at over 30,000 feet above sea level has its limitations. For instance, there is no hospital or police station nearby. No bakery, butcher or grocery store either. So when we need something that’s not on board, we have to improvise. We don’t have a magic wand to make it happen.

I’ve been lucky as there has always been a doctor on board when a medical incident occurred. And the few times that I have witnessed aggression during a flight – most of the time caused by too much alcohol – the situation never escalated. Some of my colleagues have been less lucky.

No system is infallible and, apparently, neither is KLM’s catering. So once in a while, when we are high in the sky, we discover that something is missing. Luckily, cabin crew is rather inventive.

I remember one flight to Cape Town where only half the required bread rolls had been delivered. We decided to cut them all in half.

After we explained the situation to the passengers, no one complained. And on my last flight something went wrong with the order of a gluten-free meal. It’s not easy to determine whether foods are gluten free or not, and the lady in question was highly allergic to gluten. After rummaging around the whole plane, we managed to serve her some suitable food. Even though the error was on our side, she was so grateful!

I recall numerous occasions that flight attendants solved problems by being inventive. And most of those times passengers were very understanding too. 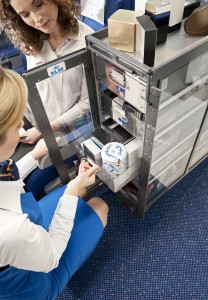 They saw that we did our utmost to find alternatives. And I guess in the end it’s all about that famous saying: C’est le ton qui fait la musique.