Last week you could read how, in the autumn of 1939, with war looming, KLM was to reunite Hans van de Steenoven with his parents in the Dutch East Indies (Indonesia today).
This week we continue with Hans’ experiences on one of the special children’s flights operated by KLM to reunify families abroad:

‘Soon there was little more to see besides water as we headed off for Alexandria with a stopover in Athens. The clouds prevented us from seeing the Vesuvius and Stromboli volcanoes. That was a pity, because I had the best seat in the aircraft – the last one at the window on the left with a clear view under the wing. You don’t get luckier than that on such a flight! The aircraft, a Douglas DC-3, flew at a speed of 260 to 300 kph, making intermediate stops every four hours or so to refuel. They could have stayed in the air longer, but the safety margins were strict and the heavily laden mail plane had to stop over at the most important places on what was then the longest flying route in the world. Every kilo counted and before departure everyone was weighed along with his or her baggage. Civilian airfields at that time were very small and rudimentary. The further eastwards you went, the more they consisted simply of grass fields and one or more hangars made of corrugated iron, with an office in the corner for the airline.’

‘The journey had lots of stopovers and even an overnight stay. In Rangoon, Burma, we had dinner with the Dutch consul. Everyone received a menu, which they sent around the dinner table for everyone to sign, resulting in a nice personal memento of this exceptional journey.’ Anke, Hans’ sister, even managed to hang onto her menu during her imprisonment in a Japanese camp.
Medan was the first destination in the Dutch East Indies. ‘This was very festive, especially for those whose parents were there to meet them. The press were there too and lots of photographs were taken of the group, with the “Gier” serving as the backdrop.’ 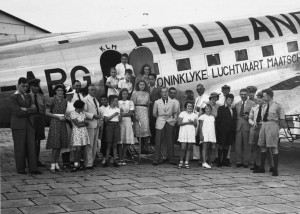 After spending the night in Singapore, it was time for the last leg, and following a stopover in Palembang, the aircraft reached Batavia in the afternoon. ‘A great many people were out and about because the papers had been giving a daily account of the trip. I don’t remember all the details of what happened, especially because of the disappointment my sister and I were confronted with on arrival: our parents were not there to fetch us!’
‘We made the last part of the journey overnight by train to East Java. At 7 a.m. the next morning, we were finally able to embrace our mother on the station platform at Sidoardjo. And our father was waiting to welcome us home in Malang at the end of the day.’