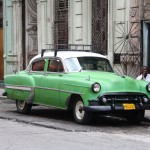 A beautiful dark-skinned boy detaches himself from the throng of taxi drivers clamouring for my business at the airport exit and walks towards me. He looks a good deal friendlier than the lady sitting behind the desk at passport control. Both she and her desk remind me of the old Eastern Bloc, a feeling that’s reinforced by the armed soldiers staring at me from all sides.
‘Welcome to Cuba! I’m Antonio.’
‘Thank you very much!’ I’m happy.
Unabashed, he takes a step back and looks me up and down, from my fringe to my red-painted toenails.
‘Juan couldn’t pick you up,’ he explains as he holds open the door of a fluorescent green Lada.
Welcome to Latin America. If Juan can’t make it, Antonio will come, or José, Pedro or Ricardo.
Fidel’s heroes Che Guevara and José Martí stare down at me expressionlessly from grey buildings as we pass the Plaza de la Revolución. I haven’t yet seen any pictures of Castro himself, although I suspect he may be spying on me from one of the many elderly American cars that wheeze past us. Fidel is always watching you. I gaze in admiration at the impressive wall-paintings with the slogan ‘Hasta la victoria siempre’ (which means something like ‘until victory always’) that draw my attention to the revolution. Atop the Capitol, the Cuban flag flaps in the breeze, proud and invincible, albeit full of holes. I tap Antonio on the shoulder – I’m sitting in the back seat, as I should – and ask him to turn up the pounding salsa. What a city! In my excitement, I stick my head out of the window and lose myself in the vibrant life around us: old buses crammed with passengers, ancient cars in all sorts of colours, rickety bicycles, and men playing cards with a glass of rum in one hand and a cigar in the other, surrounded by frisky women in mini-skirts. Yet while women and cars flaunt their colours, dilapidated buildings have lost theirs in many places. But without losing their charm. Havana is a gorgeous city full of contradictions: American gas-guzzlers, Russian Ladas, Chinese bicycles and Dutch buses. But, most of all, Cuban passion.
Antonio parks the Lada in a narrow street between two rusty Chryslers. On the corner, a group of old men are playing the Cuban son. I can feel the butterflies in my stomach. 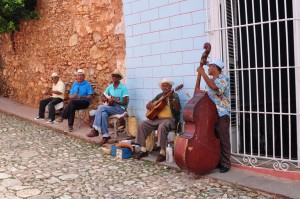 ‘Come! We’re going to eat congris!’, says Antonio cheerfully.
The butterflies vanish.
Congris is the Cubans dish: brown rice and beans with a piece of pork or chicken draped over it. It’s something that I’ve been eating in various versions for four months already during my trip through Latin America. Why do the Cubans think it’s such a treat? Or is it that they have so little choice? Apart from the products in the communist ration-books, there’s little available for a Cuban.
Suddenly we’re in front of a tiny stall where Antonio places his order.
‘I’m never going to get my daily 200 grams of vegetables,’ I remark, carelessly.
‘Your daily 200 grams of vegetables?’ he repeats. I can practically see the question-mark over his head.
When I explain the Dutch government’s dietary recommendations, I end up laughing as loud as he does.
The Dutch are weird! Imagine a government that worries about what the people eat.
The Cuban regime keeps an eye on its people in other ways.

Later, when the car refuses to start, we decide to swap a squeaky Lada for an equally squeaky bus. There’s number 49 to Appingedam. Or shall we take the 22 to Amsterdam?
‘There are also special tourist buses with seats and air-conditioning,’ says Antonio, a bit uncomfortably.
Ouch.
In his efforts to create a socialist society, Fidel has completely lost his way. I don’t know the way either, but I do know what I want: the real Cuban experience.
‘Vamos!’
Appingedam turns out to be Vibora, the neighbourhood where I’m going to stay. As I get off the bus, I see the mother of the house waiting for us in her frayed, flowery-patterned apron.
‘Hello Carolina, welcome! You must be hungry. I have made some congris!’
My stomach contracts. Not at the thought of more rice and beans but from instant love for this radiant woman in this fantastic city. This energetic, fascinating city that I have come to love in half a day even more than in my dreams.
Cuba: Hasta siempre.

Carlien is a communications consultant and sports coach. Her greatest passions are writing and travelling, preferably together. Every month, she writes a column in her blog. In 2009, she published a collection of her columns entitled ‘Beautiful moments and other pink things’ (‘Mooie momenten en andere roze dingen’).
‘We all know those moments that don’t look anything special at first sight but which are perhaps so special for exactly that reason,’ she says. ‘In the street, in a coffee bar, on the other side of the world, at work or simply at home. Those are the moments that matter.’