As a senior purser with KLM, I’ve been crisscrossing the world for over 27 years. My job suites my passion: travelling. I have visited almost every country in the world; just three more to go! When I tell people I’m from Holland, it’s usually the start of a conversation about tulips, windmills, marijuana, football and, of course, the Red-Light District. Understandable, but I feel that one Dutch tradition is never mentioned: the Elfstedentocht, our Eleven-Cities Tour on ice skates! 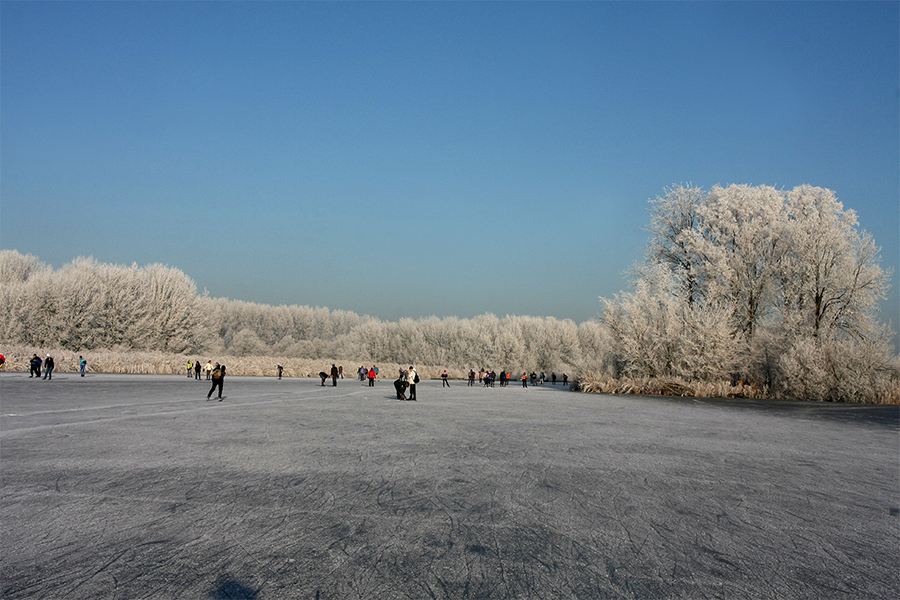 In the Netherlands, where I was born and raised, things really start to heat up when temperatures drop below zero. Whenever I hear it has been freezing for a few days, with ice thickening on ditches, waterways and lakes, I start to feel restless and want to get home as quickly as possible!

The colder it gets and the longer it freezes, the more life in the Netherlands revolves around the ice. Makeshift stalls selling warm cocoa, pea soup, glühwein and snacks pop up alongside the ice, helping skaters make it through the day. Wooden benches appear to help skaters lace and unlace their skates in relative comfort. Proud grandpas and grandmas gather on the side to watch tiny tots taking their first uncertain steps, boys playing ice hockey and girls attempting pirouettes on figure skates. No matter who you are, how old or skilled you may be, everyone has fun on the ice! 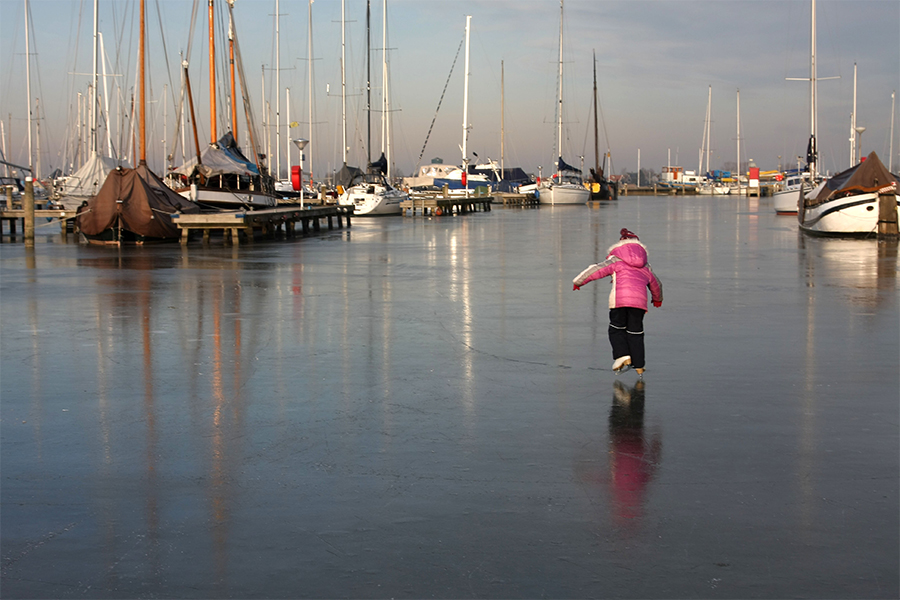 If temperatures stay below zero long enough, various skating races are organised in the Netherlands. The greatest skating race of all is the Elfstedentocht, a 200-kilometre, one-day event that passes through eleven cities, towns and villages in the northern province of Friesland. The race was first reported in historical documents dating from 1760 and has been an official event since 1909. Because the freezing temperatures required to hold the event are relatively rare, so is the Elfstedentocht. It has only been organised 15 times, the most recent being in 1997! 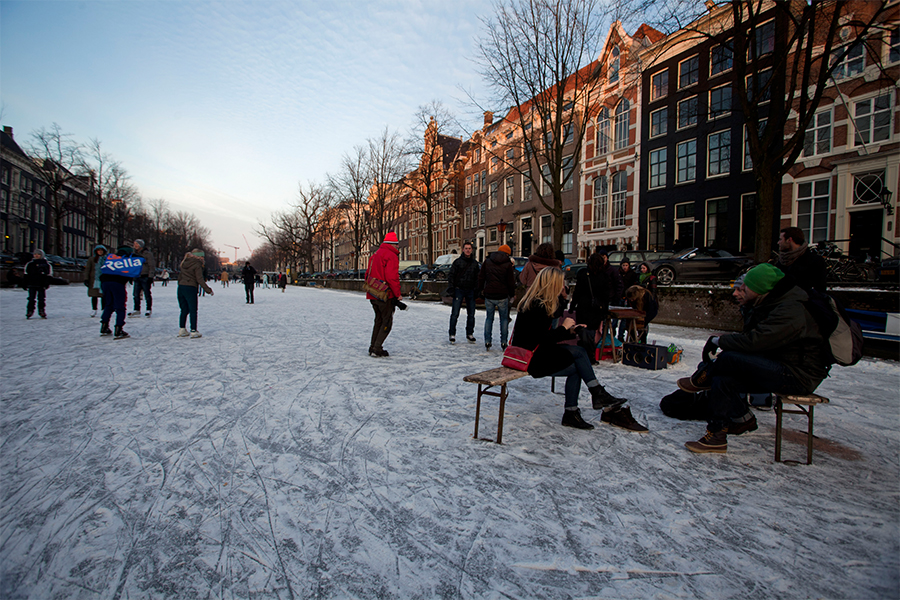 When the cold sets in and persists, the first rumours start to spread. Special ice masters keep a close eye on the quality of the ice. The minimum thickness of 15 centimetres is a must to organise an event of this magnitude. As the ice approaches the required thickness, the national news bulletin crosses to Friesland for live updates from the eleven Frisian cities. And the question uppermost in the minds of Dutch skaters as well as spectators is: Go or no go? Pandemonium breaks out when the chief ice master gives the go-ahead. Dutch people everywhere – including myself, wherever I may be – go CRAZY.

How to become a Dutchman

Around 16,000 skaters take part in the Eleven-Cities Tour, with millions of spectators cheering them on from the waterside and many millions more following the race on television, preferably at home with family and friends, from the crack of dawn until long after midnight. It bears repeating that the Elfstedentocht is a truly unique, typical Dutch tradition. Speed-skaters from around the world believe their career is incomplete unless they have finished the tour at least once. As Norway’s three-time Olympic ice skating champion Johan Olav Koss puts it: “After finishing the Elfstedentocht, I wanted to become a Dutchman.” 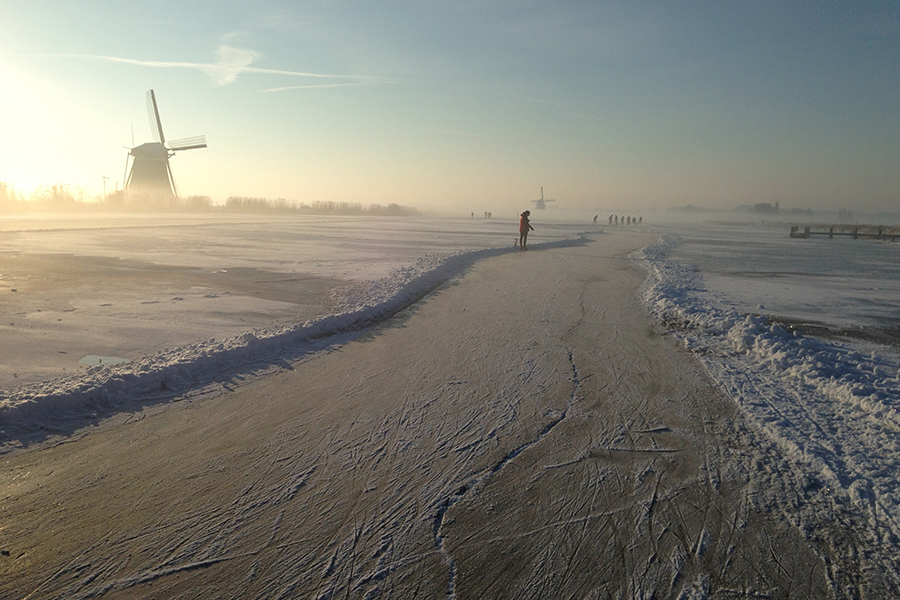 Better than cheese, windmills and tulips

I’ve had the good fortune of completing the Elfstedentocht three times. And I certainly recommend all non-Dutch readers to try to experience this unique event in the Netherlands at least once in their lives. You’ll enjoy the memory a lot longer than you would a slice of Dutch cheese, a photo of a windmill or a visit to the Keukehof Gardens!