You can get all kinds of travel deals these days. You can get a seat on a plane for less than what you would pay for lunch, or a seat that will cost you a year’s savings. But regardless of how much you pay to make your life easy, you sometimes pull the short straw. And that means flight delays, cancellations, airport closures, and so on. I’ve had it all, and I’ve heard it all. But I’ve recently started to think that these journeys have been some of the best I’ve ever had in my life. Because this is when I find the ultimate joy. It’s not in arriving but in the travelling itself: finding C between A to B. 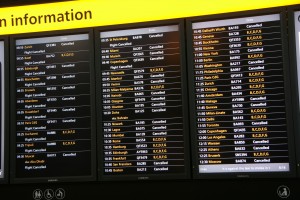 Of course, I do not wish to have these things happening to me all the time, but when they happen, they happen. Just thinking about where the unexpected can take me makes my adrenaline rise. To put it in a different way, the problem gives me what I ultimately want from travelling: adventure.

So, suddenly, there’s a problem. But you soon realise that problems in travelling can’t be solved with a click of your fingers. You can try as hard as you want, but you are not going to force an airline to fly on time when the inbound aircraft is 4 hours late. I have to resign myself to the problem, but this is ultimately a ticket to adventure, and the chances are that the person sitting next to you may also have the same “ticket”.

This is where problems find a solution. Meeting other people with problems result in a unique chemistry of good conversations and good laughs. I once had to sit in Montreal airport for 4 hours and then, after I heard that the flight to London Heathrow was cancelled, even 6 more. But it’s at times like that when people open up with many different personal stories. In a way, exploring the lives of international strangers is a big adventure in itself. I always need those extra hours to deflect myself from travelling from A to B to create C and D along the way: to listen to the lives of others, with maybe a drink or two to help the story along. When I think of the stories that I’ve heard at airports, these are the best, and they are the only kind that result from delayed inbound aircraft, technical problems, too much snow on the runway or whatever reason you hear from the loudspeaker. Out of all the travelling I have done, these are my favourite moments.

Tomohiro Harada started travelling on his own when he was 10 years old and gradually started to find out that there was more joy in travelling than in reaching the final destination. Tomohiro comes from Tokyo, but has studied in Christchurch, New Zealand, and in Sydney, Australia. He currently studies in Scotland but he lets airplanes take him everywhere, just to enjoy and look for C in between A and B.