In the 1980s – when the TV show “Miami Vice” was so popular, South Beach was a no-go area. Clearly that’s no longer the case. These days, it is Miami’s hotspot. That should come as no surprise. This sexy part of town has it all – sun, sea, beach, and pastel-coloured Art Deco pearls. Travel journalist Sander Groen shares five amazing ones with us, varying from a former brothel to a boutique hotel. 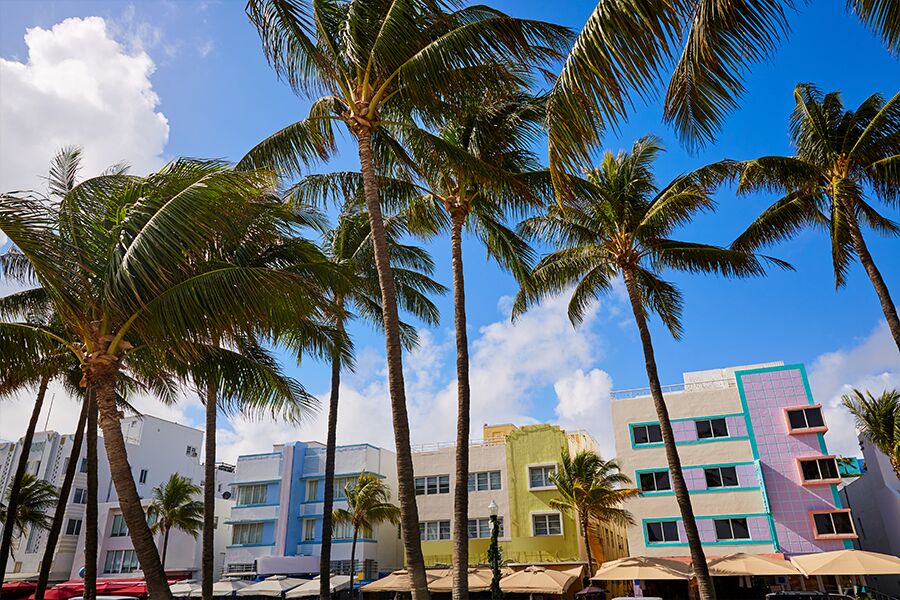 Americans think of Miami as the sexiest city in the country. In Miami Beach, the sun-drenched beach and party island off the coast of The Magic City, there are some eight hundred hotels, restaurants, bars, and clubs – all in Art Deco pastel colours. The reason for this major concentration of Art Deco is less sexy however.

In 1926, the most devastating tropical cyclone in the country’s history tore across Miami, more or less flattening it. So, some famous architects of the time – Richard Kiehnel, L. Murray Dixon, and Henry Hohauser – had the honour of rebuilding Miami, and they followed the style that was all the rage at the time – Art Deco.

Round windows, flowing facades, vertical accents, chimney-shaped ornaments, and decorative neon lighting, which was the state of the art of the time. It’s eye candy for lovers of modernist architecture and you can find some of the best examples along Ocean Drive on both sides of The Colony hotel. 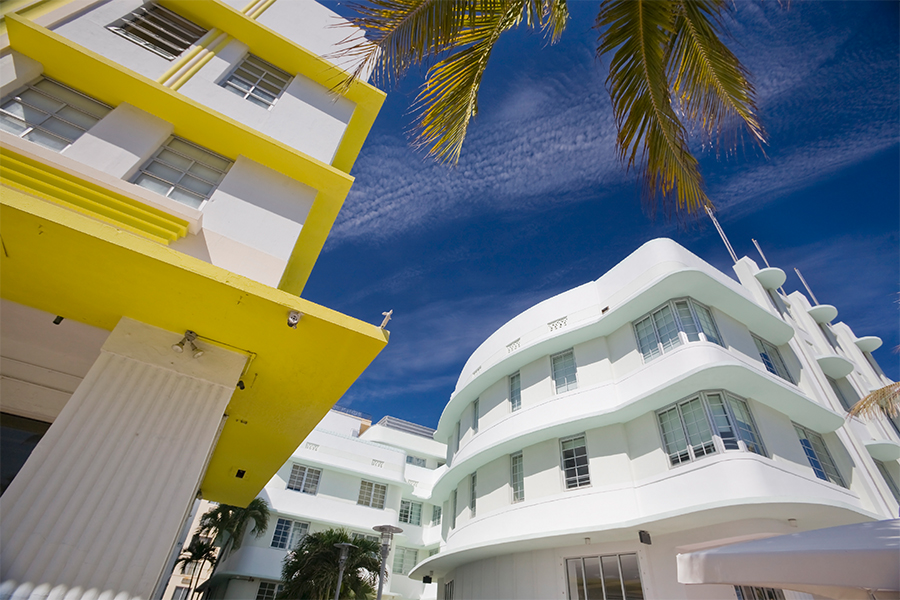 It’s eye candy for lovers of modernist architecture. And daily tours by the Art Deco Welcome Center are popular. But you can get to know the “Deco District” just as easily by following a walking route or an audio tour on your own. Here are five highlights that mustn’t be missed: 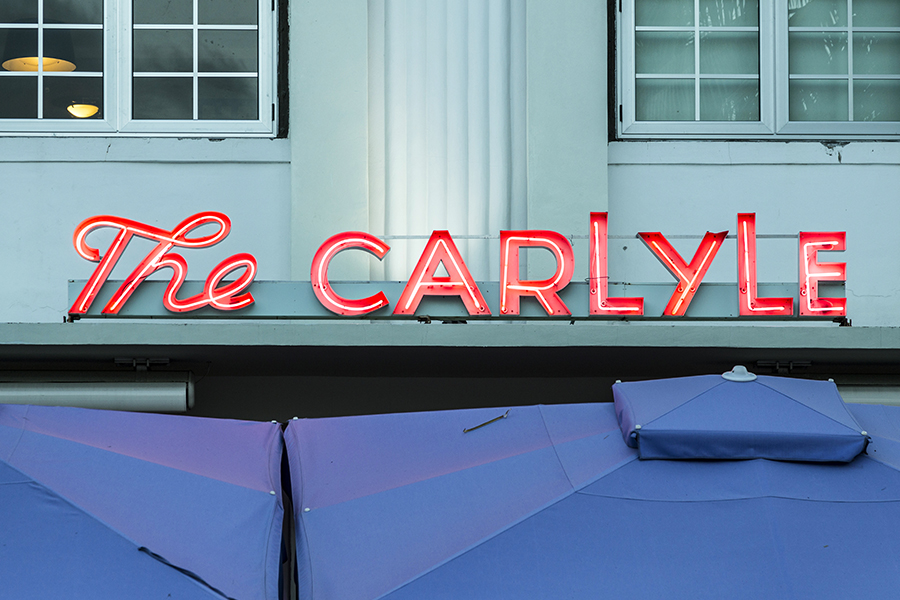 The Carlyle stands rather like a luxurious yacht on Ocean Drive, all in white with just a dash of sea-foam green. It may look familiar as it served as the backdrop for the films “Scarface” starring Al Pacino and “The Birdcage” with Robin Williams. The architects Kiehnel and Elliott took the artistic “Rule of Thirds” very seriously when designing this building. Everything is divided – horizontally and vertically, decoratively and symmetrically – in thirds. The interior has been modernised and it now serves as an apartment hotel and houses and Italian restaurant.

Paramount Pictures brought in architect R.A. Benjamin to build a cinema with a single screen and 1200 seats. The “Beauty Queen” as the locals call Colony Theatre, opened with the gala première of the adventure film “Clive of India”. In 1983 it was renovated by Morris Lapidus, Miami’s most famous architect. He restored the exterior to its previous lustre and retained many of the details around the interior. Since then, this remarkable building on the poplar shopping street Lincoln Road has served as a theatre for live comedy, concerts, dance, opera – and for films. 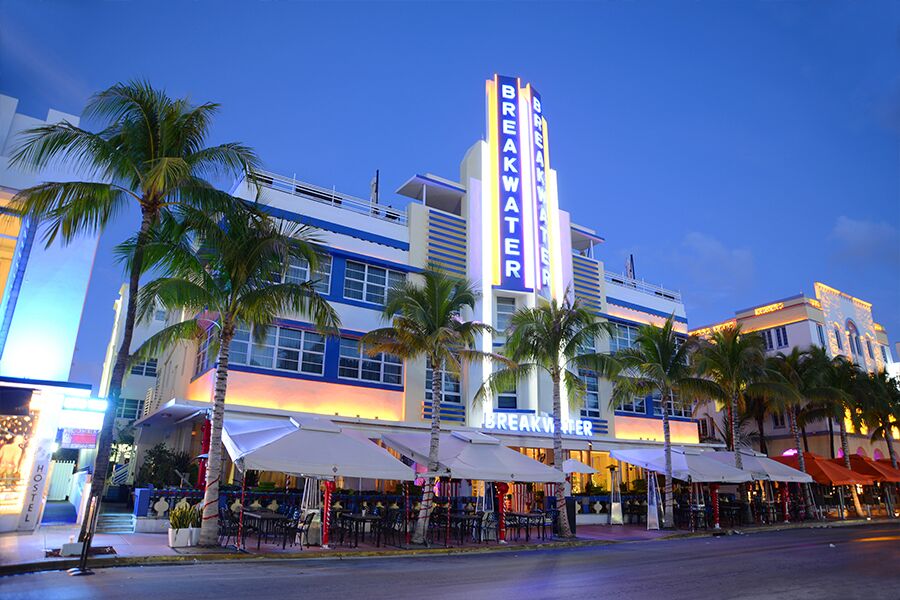 This may well be Ocean Drive’s most iconic Art Deco building.  The Breakwater was designed by Yugoslav architect Anton Skislewicz, who also built The Kenmore and The Plymouth. The tight lines and symmetry are a feast for the eyes. But the true eye-catcher is the central tower with its name emblazoned on both sides in giant neon letters. It is now a boutique hotel with ninety-nine modern rooms, a restaurant that extends inside and out, pool, roof terrace, and its own private beach.

One street behind Ocean Drive, this fascinating building has served as a cafeteria, a brothel, and as the Warsaw Ballroom, a popular gay club where fashion designer Gianni Versace was known to throw a few parties. Following that, it became Jerry’s Famous Deli, a favourite twenty-four-hour hangout for Floridians as well as tourists – and for President Barack Obama who enjoyed a pastrami sandwich there. Since then, a Mexican party restaurant called Señor Frog’s has moved in and neither the menu nor the neon sign suit it quite as well. But that makes Henry Hohauser’s original design no less beautiful. The facade is a streamlined symphony of rounded corners, towers, and portholes.

The grand prize for Miami’s best swimming pool goes to L. Murray Dixon’s The Raleigh. With ten floors and 105 rooms, this is the grande dame of Miami’s Art Deco hotels, and its showpiece the Aqua Cabana Club, was singled out by Life Magazine as “the most beautiful pool in America” once upon a time. It’s a turquoise oasis surrounded by palm trees, beds, chaises longues, parasols, and accompanied by a waterfall and a view of the sea. In the 1950s, the pool served as a backdrop for films featuring the swimming star and actress Esther Williams. And, in the 1990s, MTV recorded episodes of the music programme “The Grind” there. 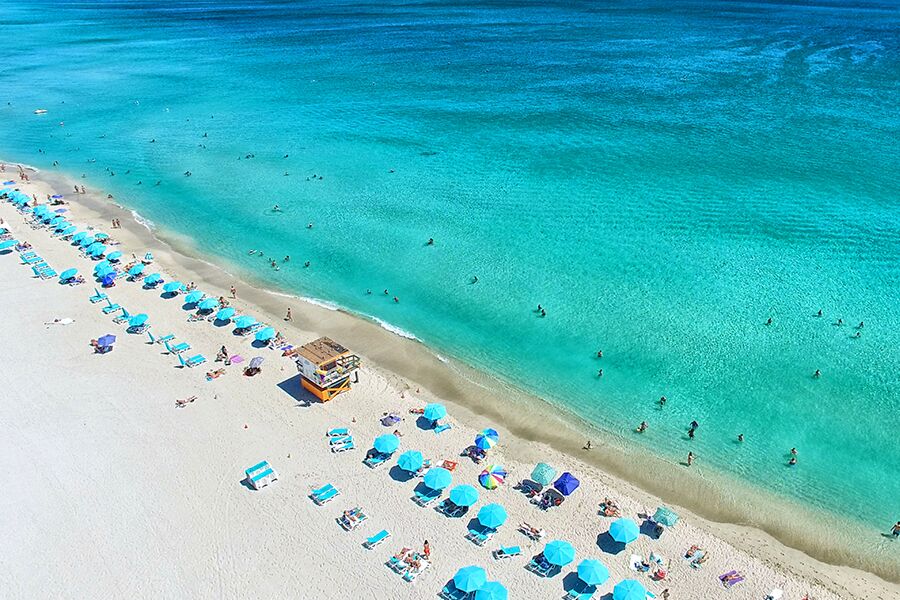 Can’t wait to walk around the pastel coloured sexiest city of the United States of America yourself? KLM loves to take you to Miami and beyond.