If you’re in the Netherlands, there are plenty of fun aviation exhibitions to enjoy at airports and museums nationwide, with events taking place from Schiphol to Woensdrecht, from Texel to The Hague, and from Amsterdam to Breda. But also in Buren, Eindhoven, Groningen, Lelystad, Nieuw-Vennep, Soesterberg and even in the comfort of your own home.

The Netherlands Transport Museum in Nieuw-Vennep is celebrating 100 years of aviation with an exhibition featuring work by artist Thijs Postma, who has been painting and drawing aircraft for decades, from the very first Fokkers to the very latest futuristic prototypes. Postma has designed many KLM posters, but also aircraft liveries for Transavia and Martinair. The museum also features real aircraft, of course, such as the DC-2, which is the same model as the famous “Uiver” that won the London to Melbourne Race in 1934. This displayed aircraft did fly in Australia, but is painted in the colours of the former KNILM airline. You’ll also find full-scale models of the Fokker FVII, “the Spider” and a Koolhoven, which will feature in the TV series Vliegende Hollanders (Flying Dutchmen) next year. 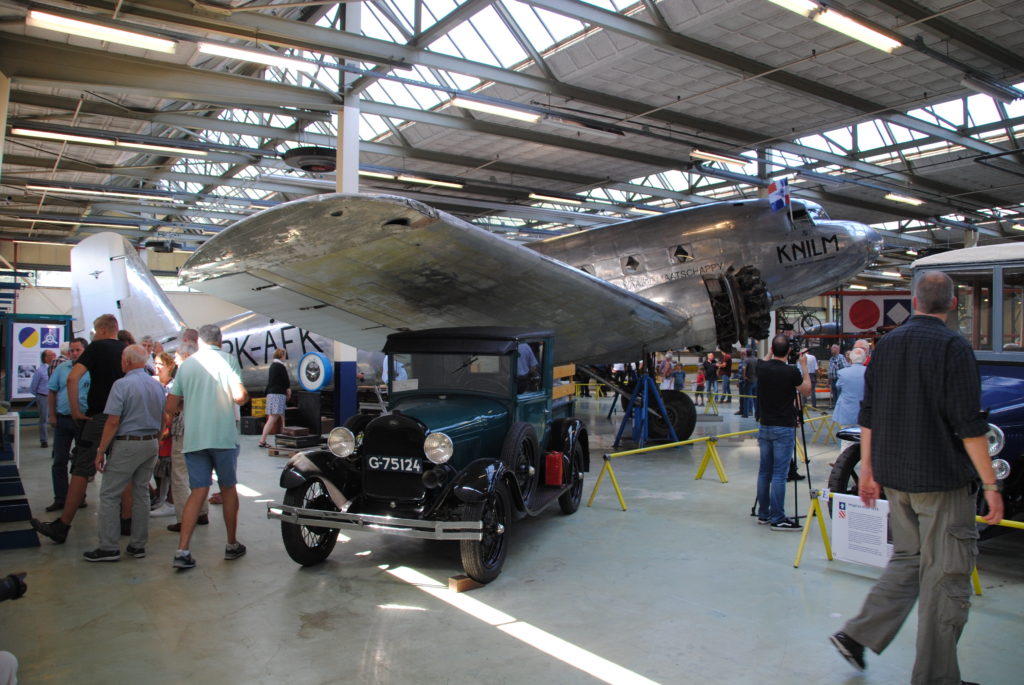 The town of Woensdrecht in Noord Brabant is renowned for its air force base, but civil aviation has also found a place here. With its exhibition on 100 years of local aviation, the Wings over Woensdrecht Museum focuses on local successes, such as the first engine-powered flight in Etten-Leur. But the museum also cover a wide array of other topics, such as KLM, technology, maintenance and the air force. Did you know that Woensdrecht was a layover base for KLM aircraft around 1954, with the DC-6, 7 and 8 fleet undergoing at the airbase? 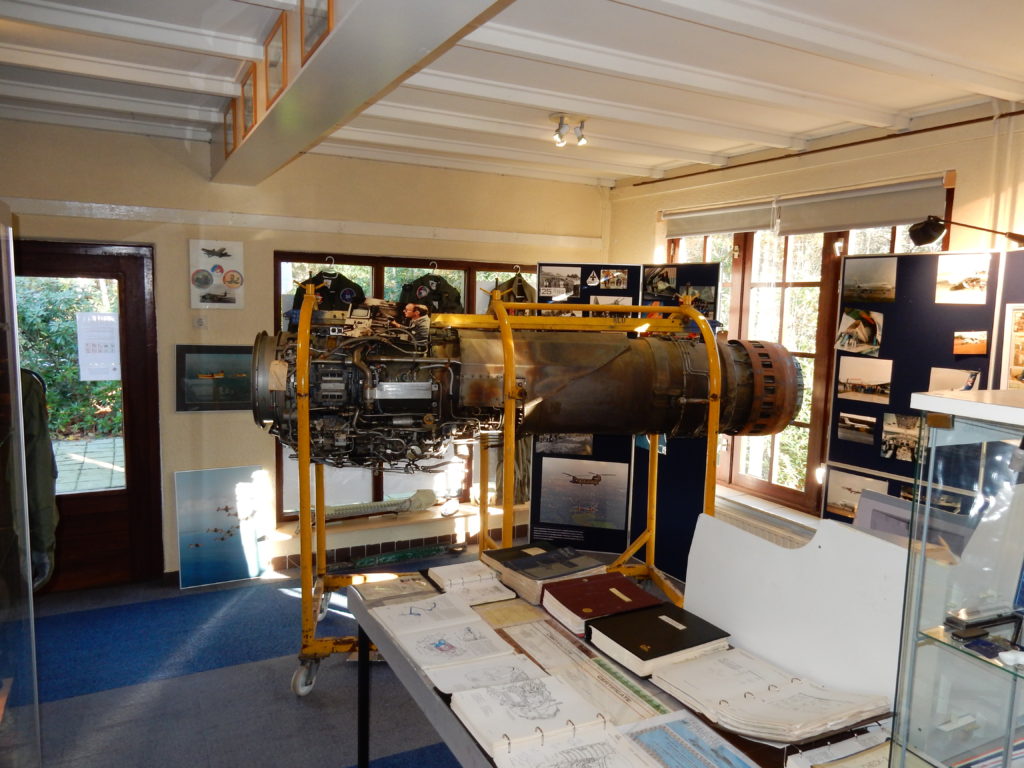 Another airport that once welcomed KLM flights is located on the island of Texel. From July 1937 until 1939, there was a scheduled service between the island and Amsterdam Airport Schiphol. KLM carried thousands of passengers with a Fokker VIIa, which the islanders named the “Blue Tesselaar”. Two other typical island inhabitants, a pair of lambs, also completed their maiden voyage aboard this aircraft. The Texel Aviation and War Museum has also devoted a modest exhibit to KLM’s former helicopters division, which operated company flights to oil platforms. To celebrate its link with the island, KLM’s 94th Delftware miniature house is a replica of the Oudheidkamer, a monumental building in the town of Den Burg. The island’s aviation history has been captured in the book Een Texelse luchtvaartgeschiedenis, which is available at the museum (in Dutch). 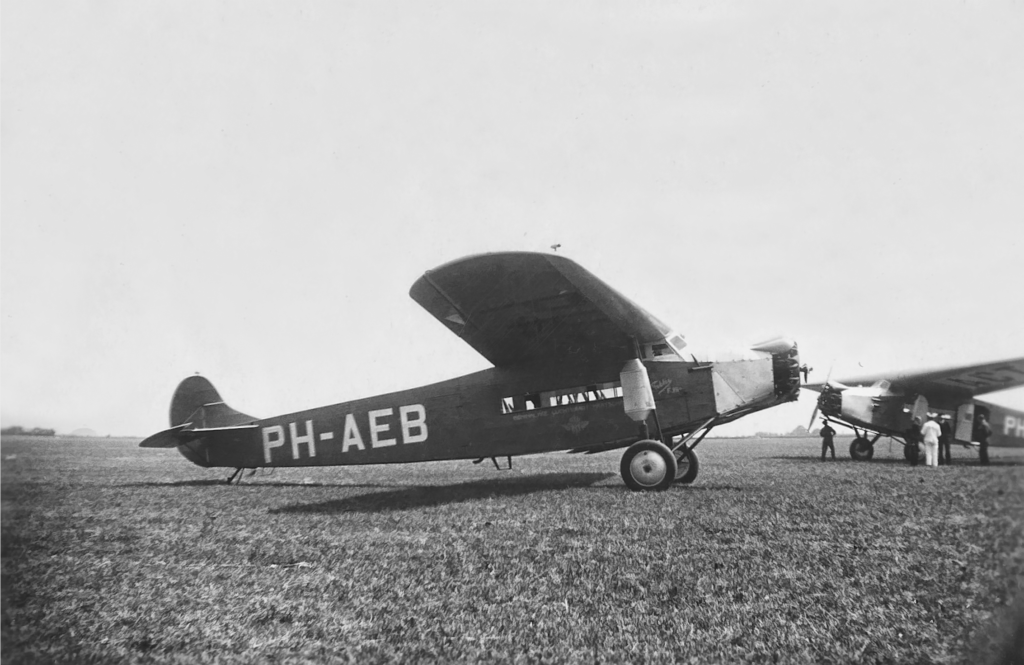 An international airport in Breda? Absolutely. That’s what the new owner is calling it, and perhaps he’s right, albeit for light aircraft only. Many aviation aficionados know the place as the Seppe Flying Museum. The staff are very proud of the twelve exhibited planes, including a Boeing/Stearman and a De Havilland Tiger Moth, all of which are airworthy and regularly take to the air. The aircraft engines are a joy to behold for tech lovers, and there are always expert volunteers around to guide visitors. 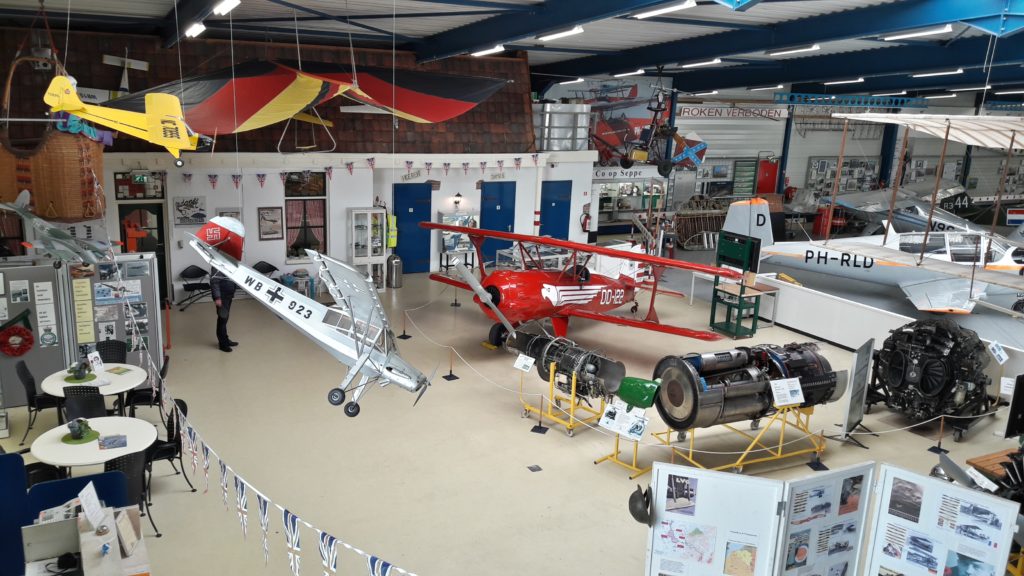 Head over to Amsterdam-Noord for the exhibition “Noord Vliegt” (Flying North), which will be on for a couple more months in the picturesque former bathhouse in Amsterdam Noord (catch the ferry behind Central Station). This is where the First Aviation Exhibition Amsterdam (ELTA) was held in 1919, attracting the likes of Anthony Fokker and other manufacturers, who presented their aircraft to the public. The exhibition attracted half a million people, who were mesmerised by this new form of transport. The ELTA is the centrepiece of the exhibition, along with the Fokker manufacturing plant, which was located in Amsterdam Noord until the 1950s. 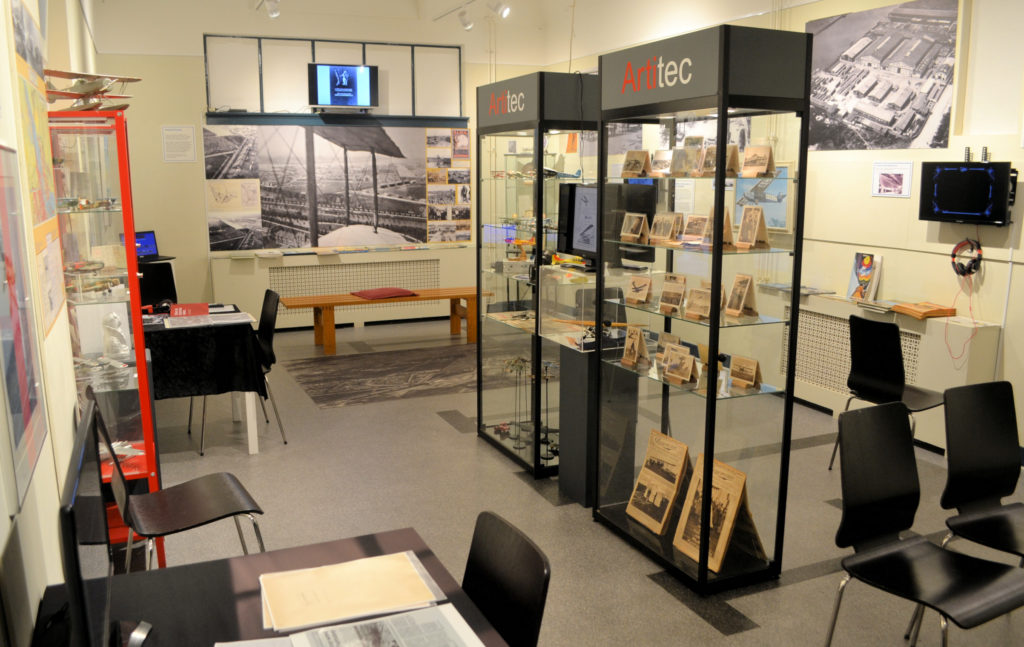 The newest aviation museum is the Dedel Design Museum in The Hague, where KLM once had its head office. The museum, which opened in October 2019, has an impressive collection of advertising posters gathered around theme “KLM, the first century”. The canal house where the museum is located is even older, having been built in 1642 by the Dedel Family, with plasterwork in Rococo/Louis XV style. The house is currently being renovated. The KLM posters are exhibited in chronological order on walls panelled with gilded leather and wood. Designed by famous artists, designers and photographers, the posters, including the magnificent Swan Campaign, give a fantastic impression of bygone eras, in combination with various menus, timetables and other printed material. There is also a book (in English) about the exhibition, which is available at the museum. 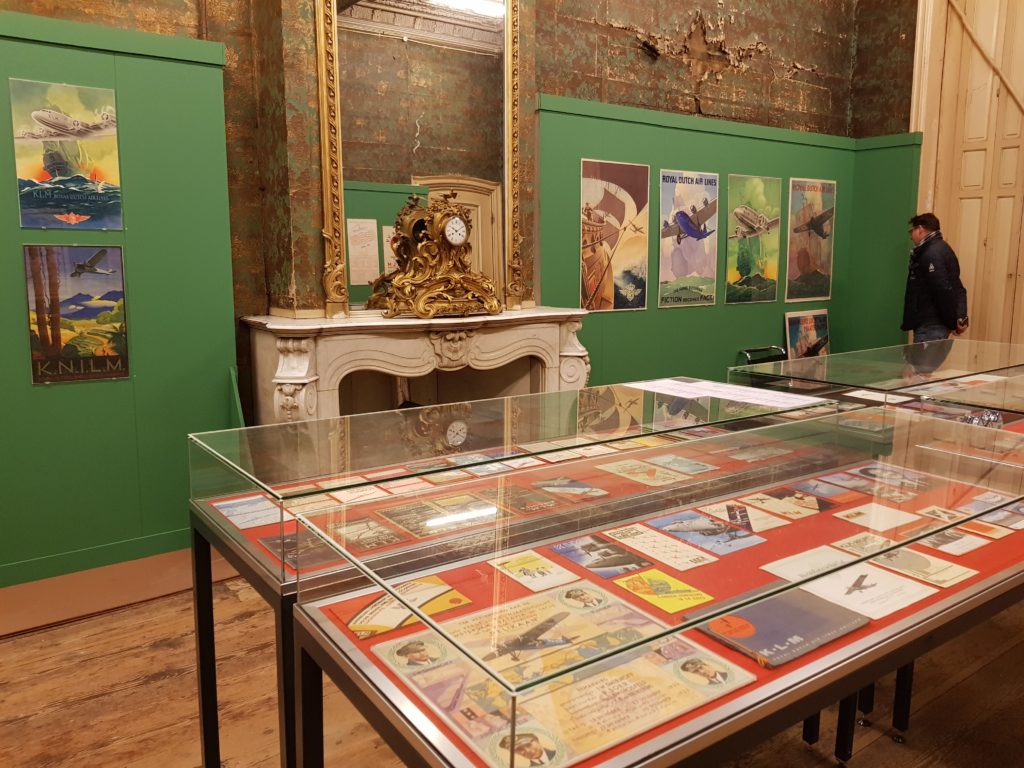 You’ll find everything you need to know about military aviation in the Netherlands at Soesterberg, where the Royal Netherlands Air Force was established in 1913. This museum has no links with KLM, but it does have lots of aircraft and other impressive vehicles, as well as a treasure trove of heroic tales.

The largest and most famous aviation museum in the Netherlands is Aviodrome in Lelystad. But have you been there since your last school excursion? The museum, which was previously located at Schiphol, is constantly innovating. Its newest exhibit is Fokker F.VIII, the oldest KLM aircraft in existence, which is on show as it was found in the hinterland of Venezuela. Another special exhibit is the Boeing 747 PH-BUK, which spells nostalgia for many aviation lovers. Visitors can view the interior of this aircraft, as well as the Dakota and a “short Connie”. The 1928 terminal building really takes you back to bygone times. History comes to life by way of personal anecdotes as told by the typewriter used by Albert Plesman’s secretary, the suitcases carried by the first pilots, and commemorative medals for famous flights. You’ll find flight simulators for young and old, and kids can test whether they have what it takes to become pilots or cabin attendants. 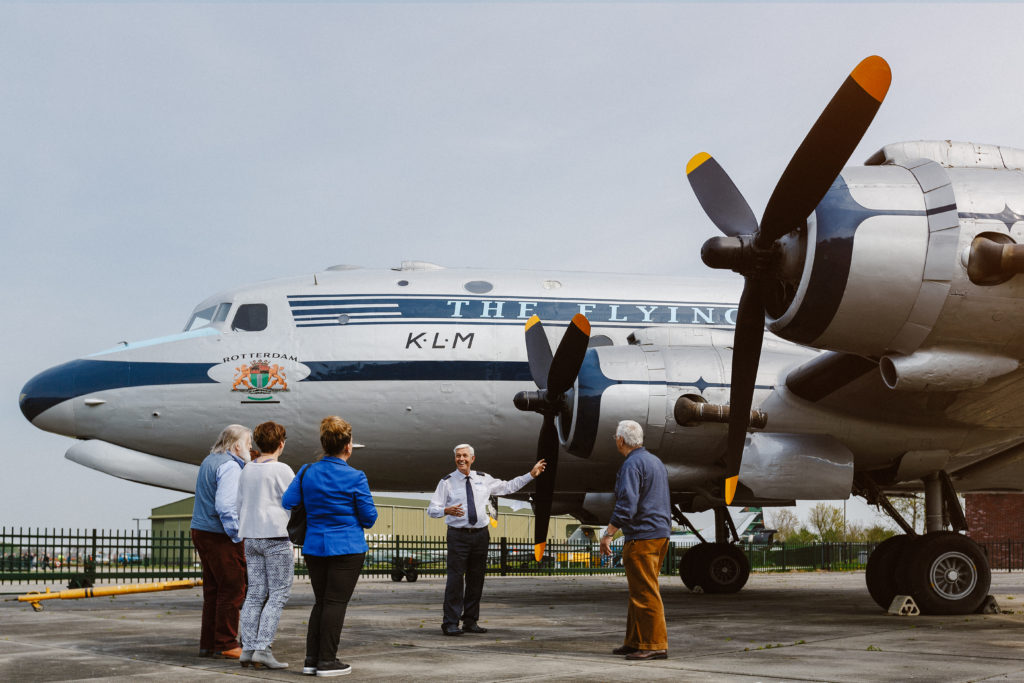 This miniature world is another Dutch favourite for school excursions, but how many people visit it later in life? A lot has changed over the decades. Did you know that KLM was one of the five founders of Madurodam’s miniature world in 1952? KLM designed and constructed the replica of Amsterdam Airport Schiphol and supplied all the model aircraft that were operational at the time, updating it regularly over the years, so that all types in the existing fleet are currently present. Another fun fact: the newest attraction of Madurodam is called The Flying Dutchman and is a tribute to KLM. From June 2020 you will make a virtual flight through time and space in the life-size, fully restored Douglas DC-3 (18 meters long, 30 meters wide).

A different, much newer attraction, which many Dutch people don’t even know about, is “THIS IS HOLLAND” at the foot of the A’DAM Tower in Amsterdam. This 5-D flight experience takes you on a tour of 22 locations in the Netherlands. You also pass over Schiphol, of course, where you’ll experience a “near miss” with a KLM aircraft. 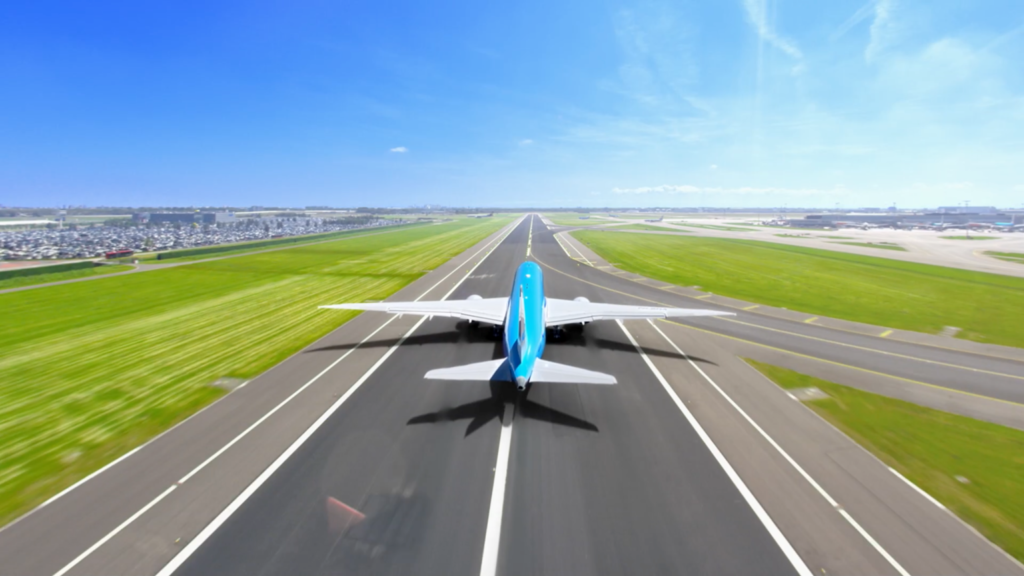 Do you prefer the real thing? If so, why not head up to the panorama terraces at Amsterdam Airport Schiphol, which you can visit free of charge! You can also view the Fokker 100 donated to Schiphol by KLM. At Groningen Airport Eelde, the restaurant with a view of the apron is aptly called “Bites & Flights”, while the restaurant at Eindhoven Airport also offers a panoramic view of the apron. You won’t find restaurants like this at the airports in Rotterdam and Maastricht. 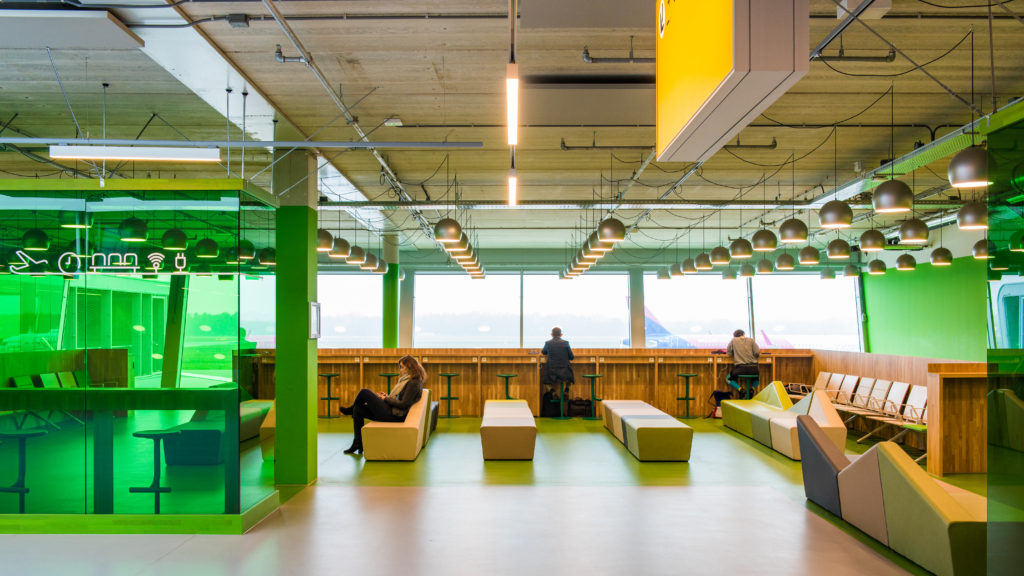 You won’t find any planes here, but you will learn a lot more about border control, which is the task of the Royal Constabulary (Koninklijke Marechaussee, KMar). See how KMar checks your identity and see for yourself whether your passport is real. There’s also a replica of the toilet used for (suspected) drug mules. The museum is located in the town of Buren in Gelderland province. And who is the Count of Buren? Our very own King Willem-Alexander, who is also a KLM pilot, which brings out royal story full circle!

And if you’d prefer to stay at home and view beautiful pictures of 100 years of KLM history, please visit the photo archive of the Maria Austria Institute. Simply click on the link below and type in whatever search terms appeal to you – KLM, aircraft, pilot, stewardess, flight – to see thousands of photos from aviation’s glorious past.

For all museums, please check current opening hours on their websites or contact the museum. Please note that volunteers are not always present as guides.