Although I’ve never been there myself, the Netherlands Antilles are a highly popular holiday destination. The islands are favourably located in relation to the USA and South America, and an eight-hour flight from Amsterdam. KLM launched its West-Indian Operation almost 80 years ago; the legendary “Snipe” flew the inaugural service.

The arrival of the “Snipe” marked the completion of KLM’s first transatlantic flight, but also served another purpose: to base aircraft in the Antilles. Albert Plesman had come up with the plan to serve the Dutch colonies in the Caribbean and Suriname in South America. He also hoped to set up air lines to Venezuela and the United States. This proved to be quite a challenge, but with much perseverance KLM managed to establish a flourishing West-Indian Operation, which was somewhat detached from operations in Amsterdam. There were similar sub-operations for Europe and the North Atlantic. 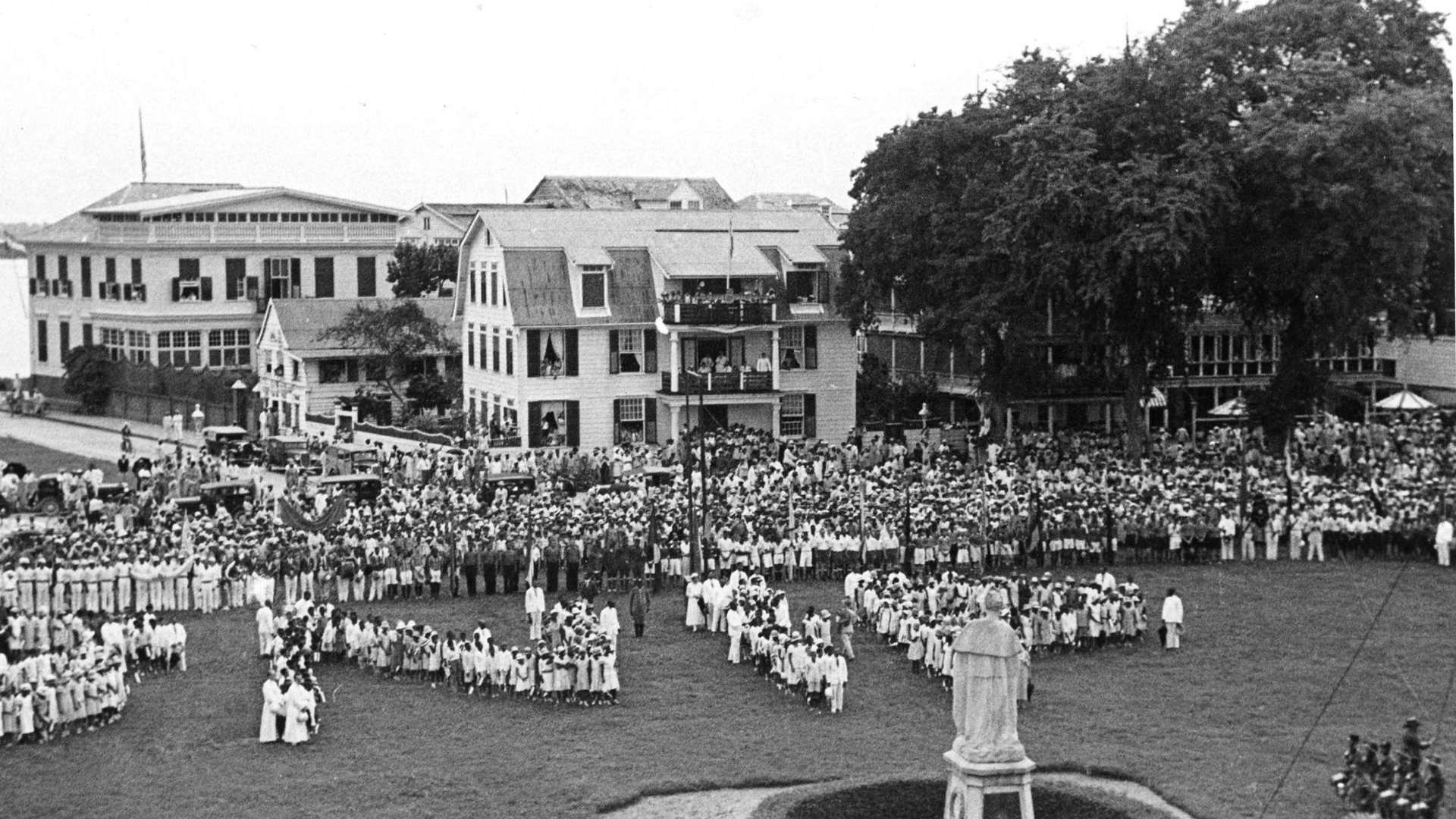 Celebrations on what was then Oranjeplein (now Onafhankelijkheidsplein, Independence Square) in Paramaribo, marking the arrival of the “Snipe” in 1934.

In the Caribbean, KLM followed in the slipstream of Pan American Airlines. Pan Am had previously operated a service to the island of Curacao, but had suspended it in the early 1930s, because there were too few passengers. But KLM wouldn’t be KLM if it hadn’t seized the challenge. After the “Snipe” had been relieved of its extra fuel tanks (required to make the transatlantic crossing) and had been converted into a passenger plane, KLM’s West-Indian Operation launched its first service between the island of Curacao and Aruba on 19 January 1935. The passengers were mainly government officials, oil company employees and business travellers. The airfields on both islands were expanded and improved for the occasion, and plans were laid to open an airfield on the island of Bonaire, which eventually welcomed its first flight on 9 May 1936. 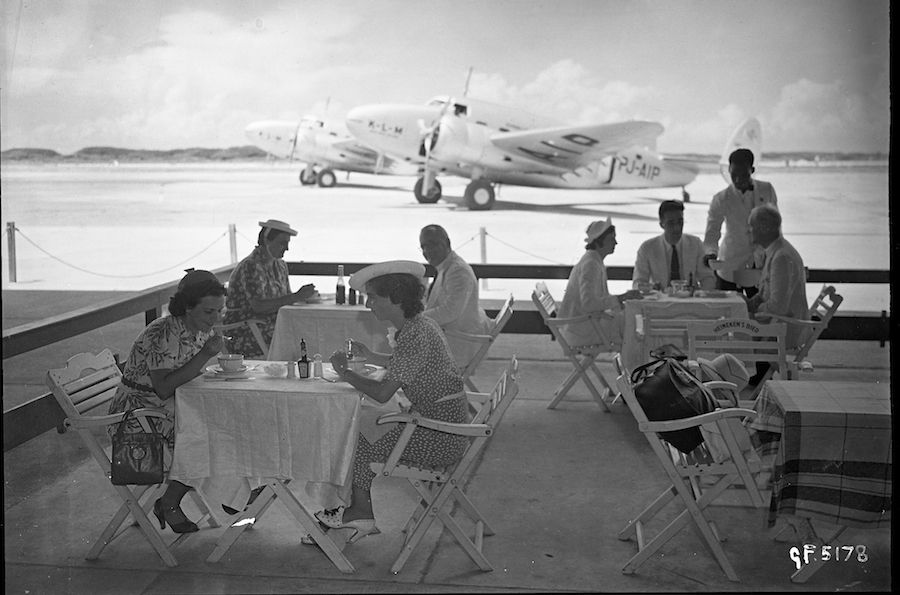 On the terrace at Hato Airport in 1938 with the two Lockheed-14s, registration PJ-AIP and PJ-AIM, on the tarmac.

The first service to Venezuela was operated in July 1936. This route was later extended to include the capital city of Caracas. This led to the gradual development of a network of destinations, which included the islands of Barbados and Trinidad. By 1939, KLM’s West-Indian fleet consisted of six aircraft: two Fokker F-XVIIIs and four Lockheed Super Electras. 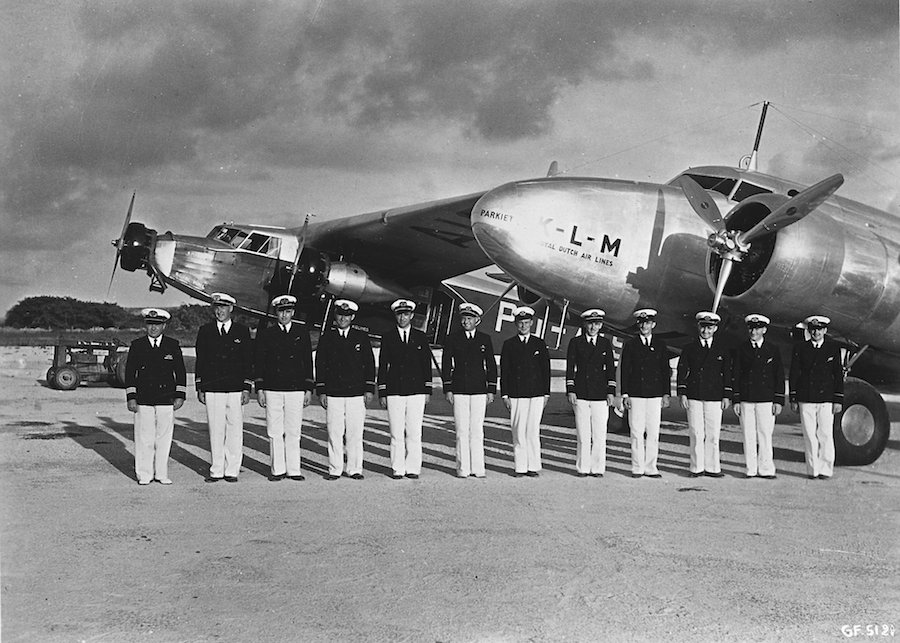 Crew and staff of KLM’s West-Indian Operation posing with the Lockheed-14 “Parakeet” and Fokker F-XVIII “Snipe”.

The outbreak of the Second World War in 1939 had major consequences for KLM’s European network and flights to the Dutch colonies in what is now Indonesia. But it had less impact on KLM’s West-Indian Operation, which was running smoothly. The day after war broke out in Europe, on 3 September 1939, KLM launched a new scheduled service between Curacao and Paramaribo (Suriname) via Trinidad. It bears mentioning that this route wasn’t particularly successful, with passenger figures so low that KLM couldn’t break even. However, the government in Paramaribo saw the service as point of prestige and wanted it maintained. In the end, a substantial subsidy was required to keep the route open. 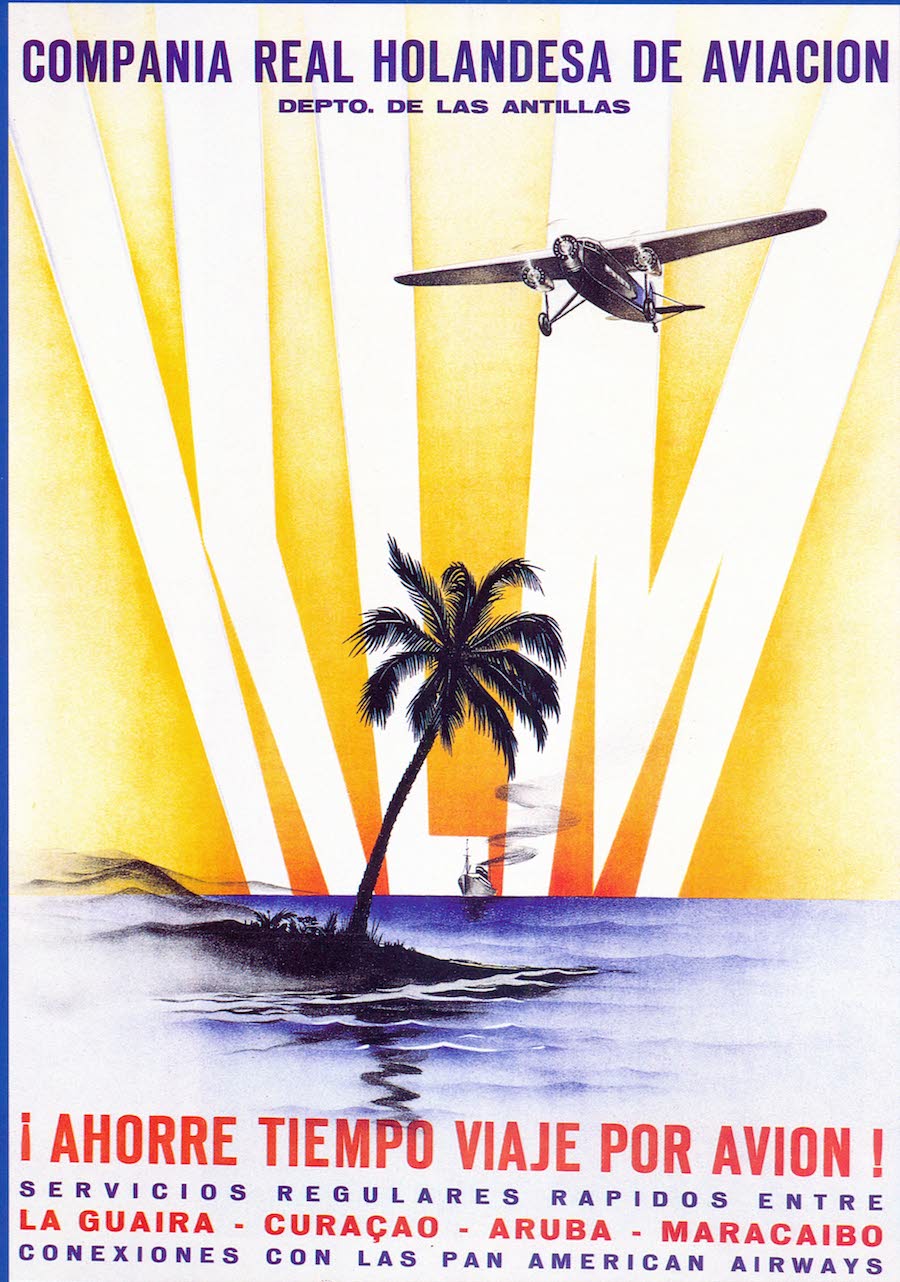 A 1941 poster for KLM’s West-Indian Operation.

However grotesque it may seem, the war also offered KLM opportunities in the West Indies. It became more hazardous for ships to sail in the Caribbean following the Japanese attack on the American naval base at Pearl Harbour, which drew the USA into  the war. This meant that airborne services, including those offered by KLM, became more essential in the region. 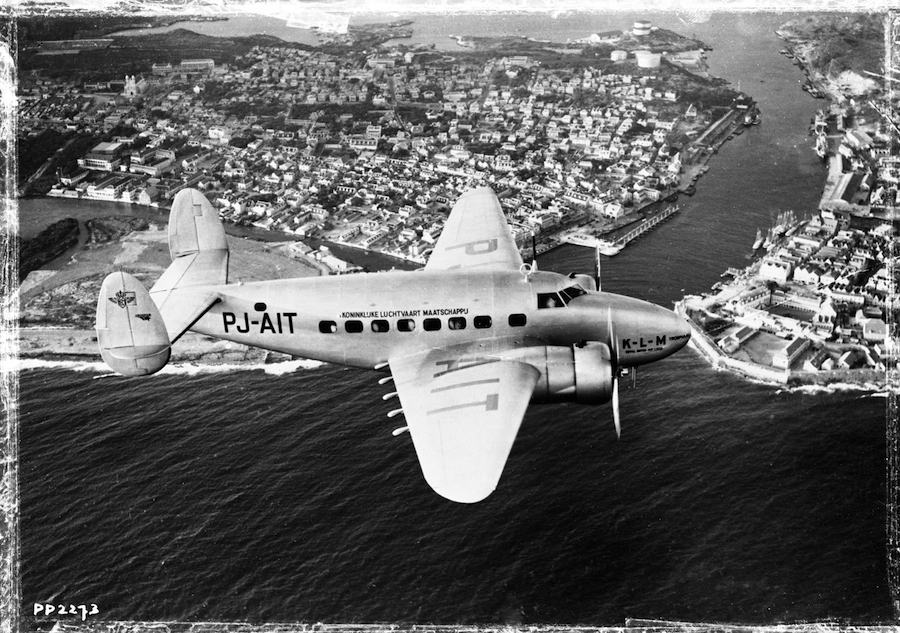 The Lockheed-14 Super Electra PJ-AIT “Troepiaal” on its way from Curacao to Miami in 1943 on behalf of KLM’s West-Indian Operation.

During this turbulent period, the opening of the Curacao-Miami route in August 1943 was an important milestone for KLM’s West-Indian Operation, because it ensured a connection with Pan American Airlines’ USA network and, hence, transfer opportunities to New York and other cities. At the same time, military strategy dictated that the airports on Aruba and Curacao should be substantially upgraded and prepared for larger aircraft. In addition, a service was launched to the island of St Maarten, which welcomed the first KLM aircraft on 3 December 1943. 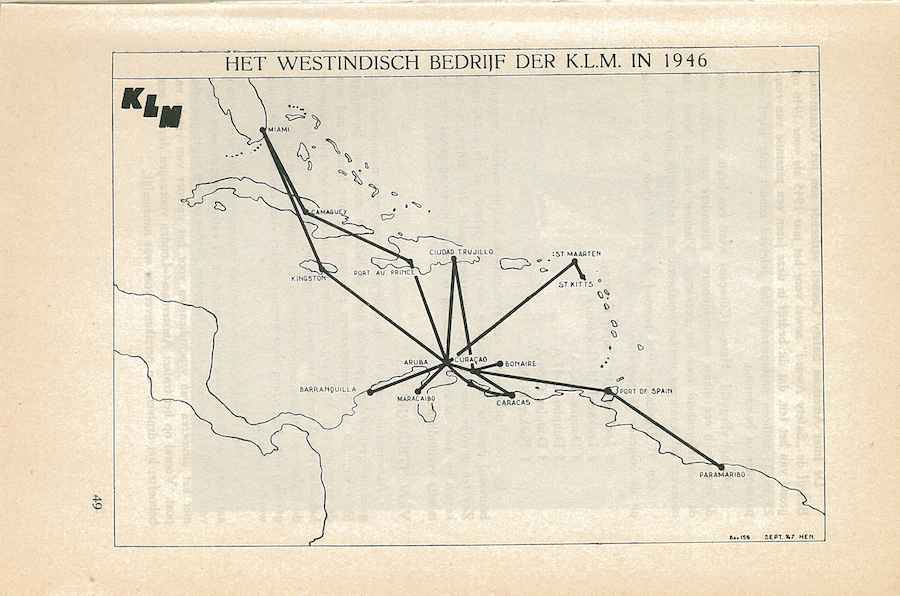 Direct connection with the Netherlands

In short, KLM’s West-Indian Operation ran pretty smoothly during the war, whereas KLM in the Netherlands existed only on paper. After the war, results in the West remained impressive, with passenger figures doubling in the early postwar years. In the Netherlands, Albert Plesman and his staff began restoring KLM to full health, not only reopening pre-war routes, but also planning new services. The highlight was, of course, the new Amsterdam-New York route, which was inaugurated on 21 May 1946 and presented opportunities for a service connecting the Netherlands with Curacao. A lack of aircraft meant this service was only operated incidentally at first, but a regular service was eventually launched in October 1947. Another service connecting Amsterdam and Curacao (via Lisbon, Dakar, Caracas and Paramaribo) was launched on 20 May 1949. 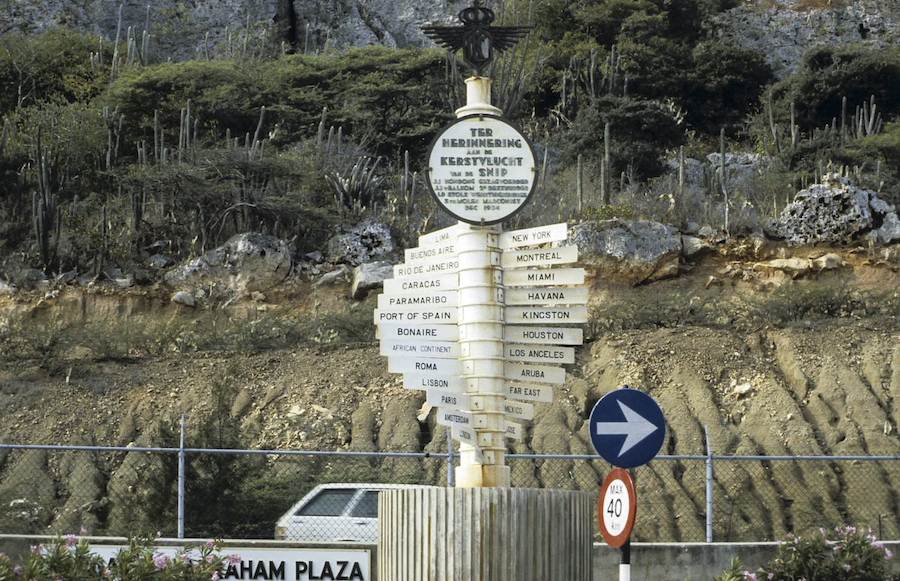 Monument at Hato Airport erected five years after the arrival of the “Snipe”.

By then, the golden years of KLM’s West-Indian Operation were over. Competition increased and had a major impact on the Curacao-Havana-Miami route, which was highly profitable to KLM. The results were also disappointing in the years thereafter and the operation had to be reorganised. In the late 1950s, negotiations were initiated with the government of the Antilles, which was inclined to establish its own airline. However, it was not until 1 August 1964 that the Antilliaanse Luchtvaartmaatschappij (ALM) was established as an independent KLM subsidiary. This marked the official closure of KLM’s West-Indian Operation.