Mexicans are fun-loving bandits with large hats and moustaches. When they aren’t lazing around in the shade of their sombreros, they’re either robbing banks or swilling tequila and playing guitar, which usually contains a concealed weapon of some sort.

This is how Mexicans were portrayed in the cowboy movies and comic books I grew up with. More recently, Mexicans in popular film and fiction have undergone a transformation of sorts: Those who aren’t members of gangs are either attempting to swim across the Rio Grande or are performing menial labour in American kitchens, gardens and fields. In all instances, their activities are somehow illegal.

If Dutch people were consistently portrayed as cheese-eating, dope-smoking bisexuals, tiptoeing through the tulips on our clogs to euthanise our parents, I think our government would hire the very best legal team to sue movie companies and publishers, while our ambassador to the United Nations would engage in overt and covert diplomacy to ensure that such prejudicial stereotypes were rectified.

If the Mexican government has indeed undertaken such action, it seems to have had little effect. I have limited space, resources and, yes, intelligence at my disposal, yet I am foolhardy enough to attempt to use this space to correct these perceptions on Mexico’s behalf. I know there must be some Mexican readers out there who will be tempted use the unlimited comment space below to set the record straight by sharing some interesting facts about their country.

To get the ball rolling, I’d like to take a closer look at the two 20-peso banknotes that my wife, the professional traveller, brought home from her last trip to Mexico City. As I mentioned in one of my first blogs, about Almaty, my father claimed you could tell a great deal about a country from its banknotes. 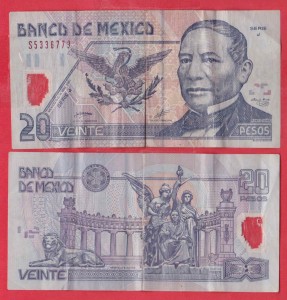 The first thing I noticed is the little plastic window in the banknote. I have seen coins with holes in the middle, but this is an entirely new phenomenon to me. When I showed the bill to my sharp-eyed daughter, she pointed out that the number 20 is embossed in the plastic window, which is strangely asymmetrical. I checked a map to see if the window matches the shape of Mexico, but it does not. So, what does it resemble, if anything?

The man on the banknote is Benito Juárez, who served five terms as president of Mexico from 1858 until 1872. According to Wikipedia, Juárez was of Zapotec origin and the “first full-blooded indigenous national ever to serve as President of Mexico.”

In the background, we see the Mexican coat of arms, which features an eagle holding a snake. The eagle is perched on a prickly pear cactus, with oak and laurel leaves below.

The image on the back of the banknote is the Hemiciclo a Juárez monument in Mexico City, featuring a sculpture of the president guarded by an angel and Liberty (I think), with a lion on the left.

All this leads me to conclude that Benito Juárez was of great importance to Mexico, but I think I need to read a good book on Mexican history to find out why. Any suggestions would be most welcome. As would any interesting facts about Mexico and its most popular artists, musicians, authors and filmmakers. Anything to balance out four decades of Westerns with hard-riding pistoleros roaring “Gimme your dinero, gringo!”