Aircraft aren’t allowed to reverse unsupervised at Schiphol. But they certainly don’t only move forward when taxiing. All pushback manoeuvres are handled by a 140-strong team at KLM Towing Services. People like Harrie en Heino, who use their tug to give planes a nudge in the right direction. I spent a day on the job with them.

It’s 06.00 and still dark when I report for duty at Schiphol and pick up my bright-yellow vest and heavy-duty boots. Harrie Lenzen has been with KLM for 36 years, and Heino Timmerman has racked up 26 years. They still get a kick out of their work. 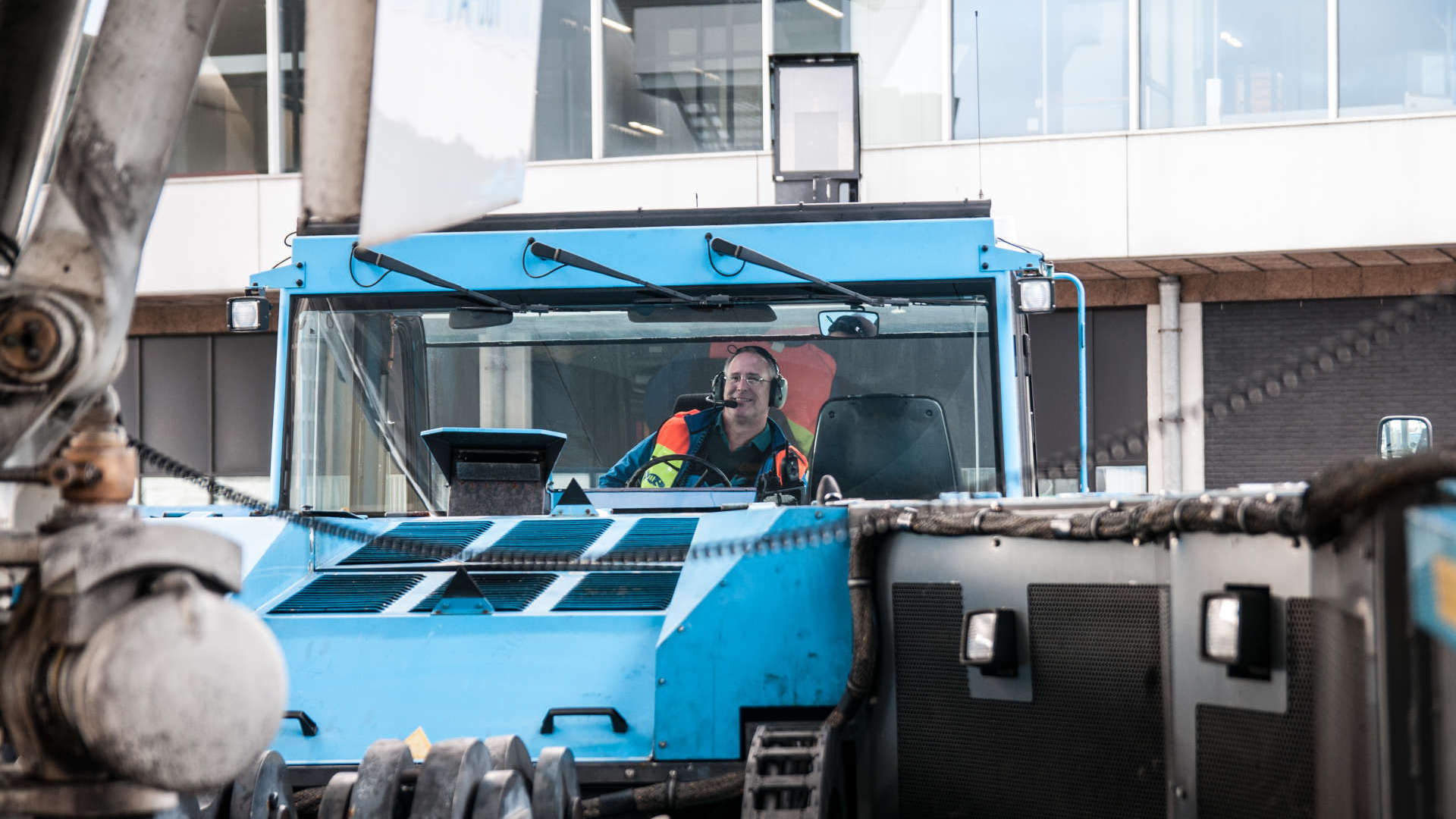 “What makes your job so special?”, I ask them. “It’s different every day,” says Harrie. “It never gets boring. We start the day by checking our planning computer, even though we know things will have often changed within half an hour. Aviation is all about flexibility, so that’s something we all have in common. We keep checking the handheld terminal to see which towing assignments pop up. The first is an Airbus A330, which we have to tow from Gate D3 to Hangar 11 for maintenance”. 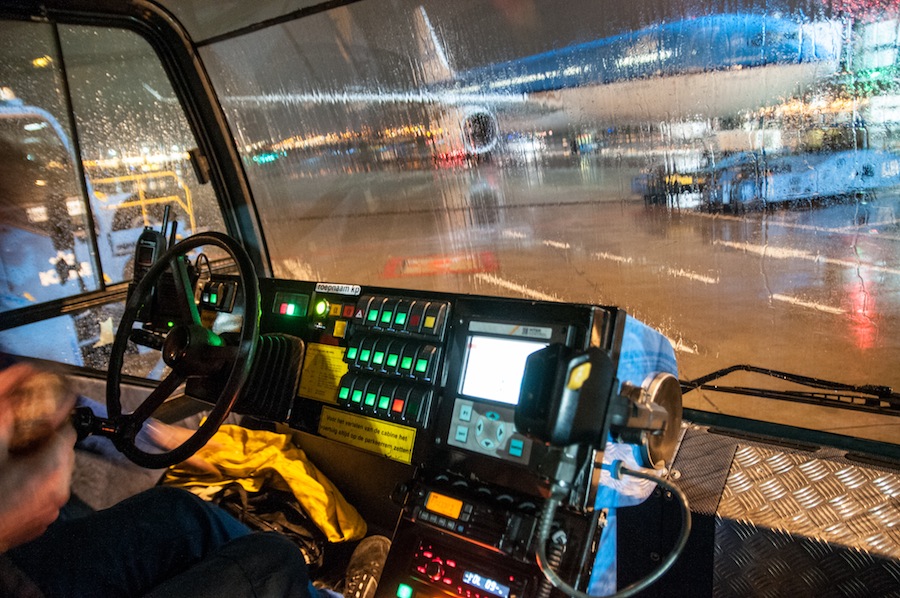 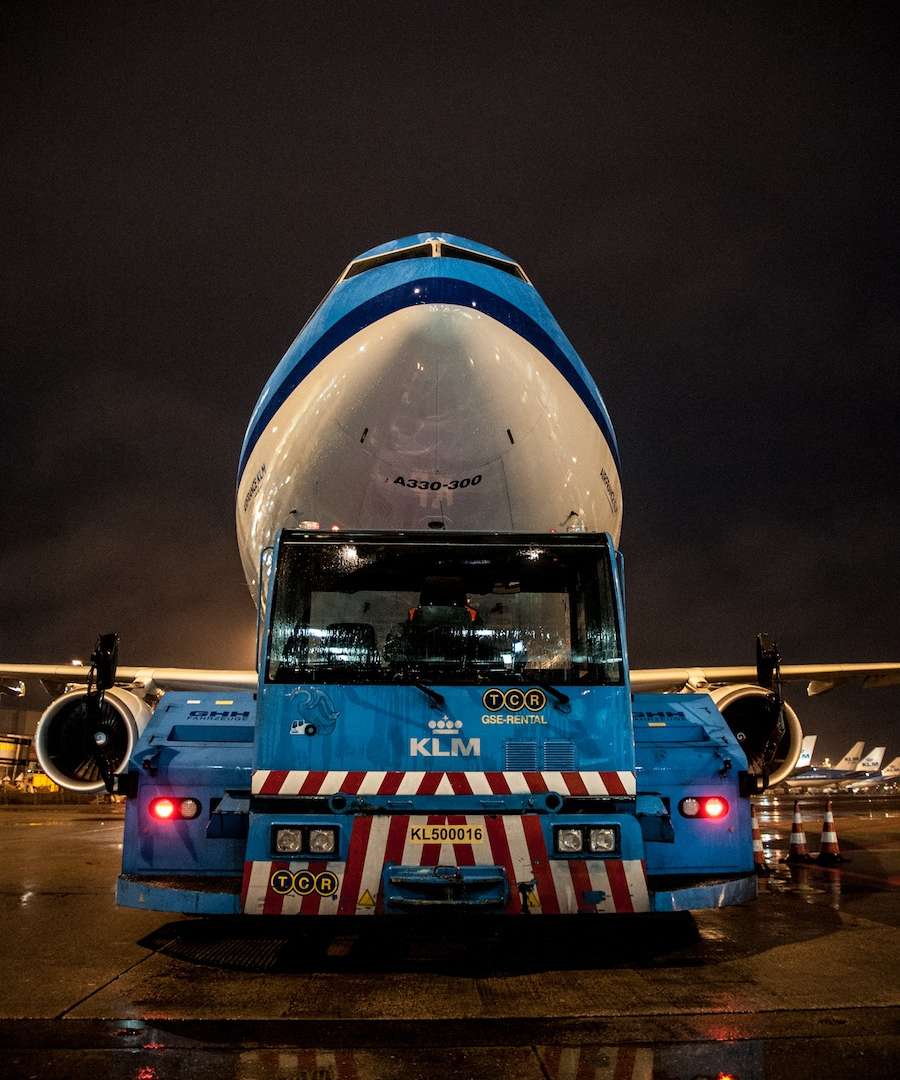 Two giant clamps encircle the nose wheels of the A330 and lift the plane off the ground with ease. The clamps look like the pincers of a mammoth crab.

While Harrie takes the wheel of the AM500, Heino is up in the cockpit. This is a two-man operation. While Heino prepares things in the cockpit, Harrie handles communications with Apron Control. “They need to know where we are at all times. We’re in constant contact with the tower via our transponder (much like a GPS tracking device; Ed.)”
Heino releases the plane’s brakes and, with the aid of a bypass-steering pin inserted in the hydraulics system of the nose wheel (see photo), Harrie takes over the steering. 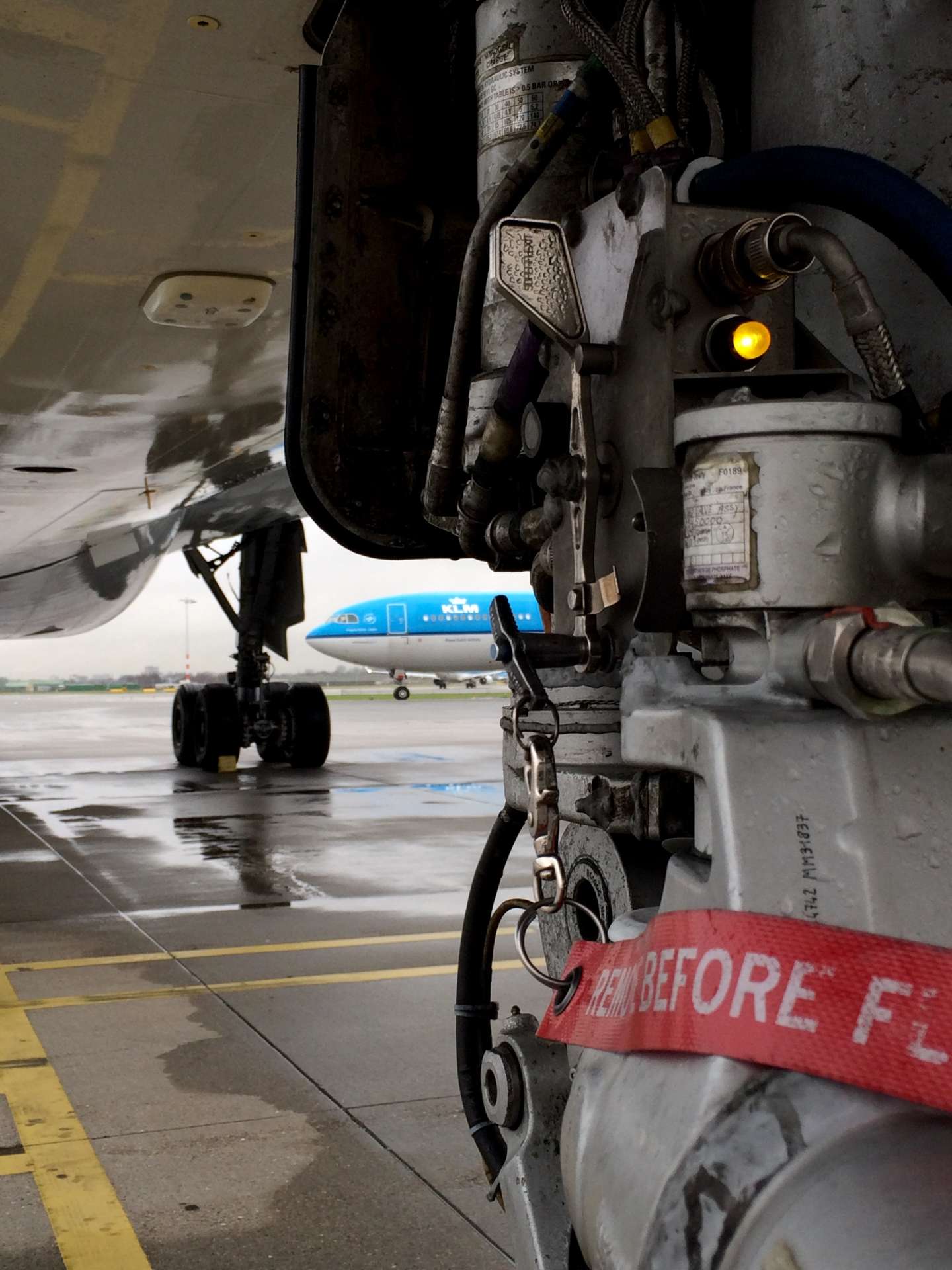 We receive clearance from Apron Control and start towing. There are traffic signs and flashing red and orange lights everywhere. Rain is pelting the tug’s windscreen. It’s as if we’re setting off on a rollercoaster ride, but Harrie remains cool, calm and professionally collected. He manoeuvres the plane as if he’s towing a caravan. “The first metres are pretty heavy going, but once we’re rolling, we’re rolling.”

Things are busy at the airport, with planes on the taxiways and flights taking off and landing. That means Harrie has to stay in touch with Apron Control constantly via his headset.

“Tower, good morning, this is Alpha-Kilo-Bravo.” (we’re towing the PH-AKB, which means we use the last letters of registration as our call sign).
“Alpha-Kilo-Bravo: Echo5 West, Runway 18 Left, Cross 36 Romeo.”
After a series of brief exchanges in this alien language, we are allowed to cross the runway. 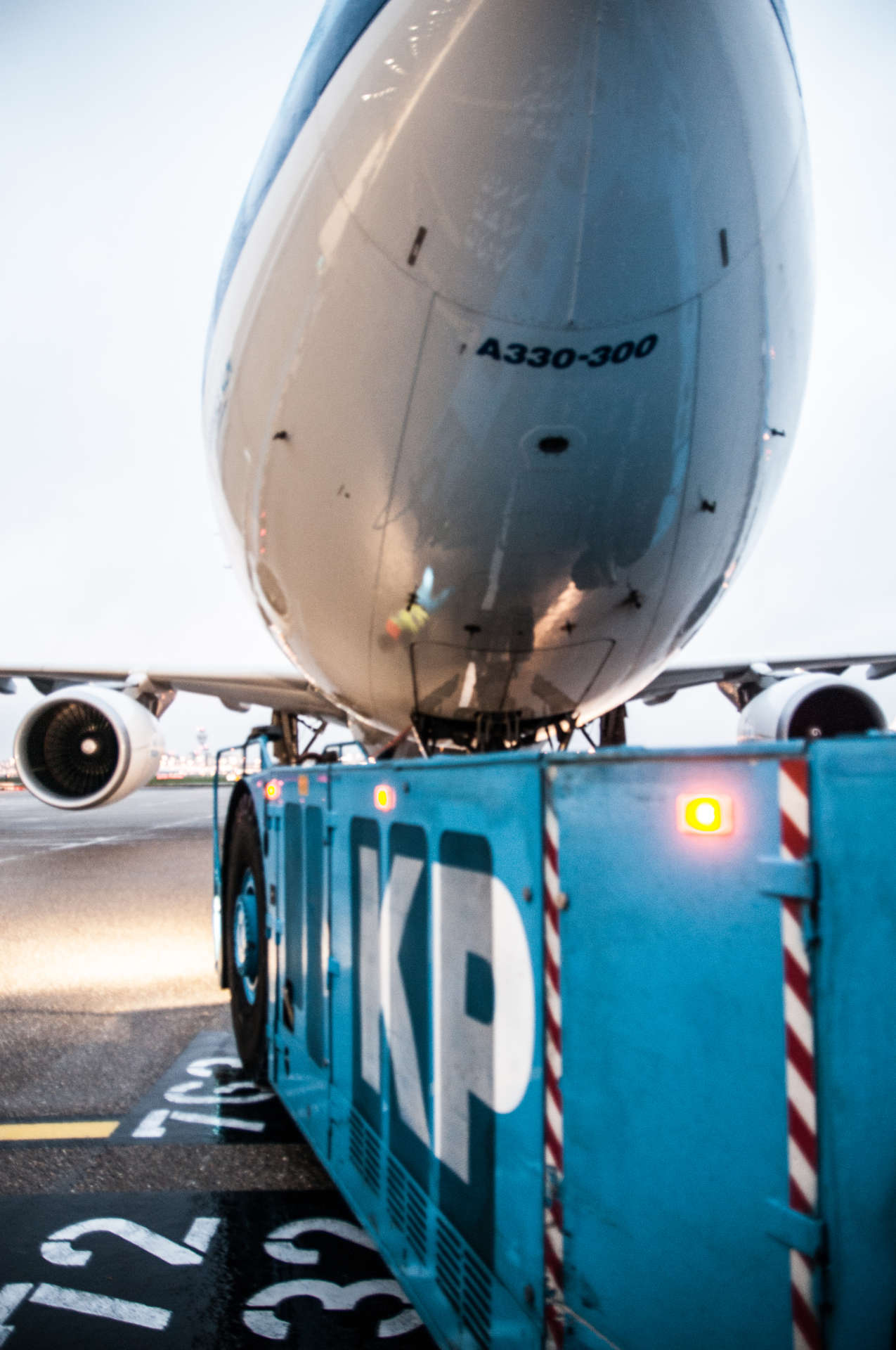 Twenty-five minutes later, we arrive at Hangar 11. We transfer the plane to a colleague with a different tug, who pushes the plane into the hangar. Our job here is done.

We receive our next assignment. A Boeing 747 has to be pushed back from the gate to the taxiway. The plane is ready for departure. This is a single-man pushback, which means Heino can handle it alone. Heino inserts the bypass-steeing pin and hooks up the communications cable between the cockpit and the tug, so that he can maintain contact with the pilots. He then completes a number of other procedures, including the pre-departure check, which means inspecting the contours of the plane one last time, to see whether all the doors and hatches are properly closed.

He then informs the cockpit via his headset: “Pre-departure check completed.” We’re ready for pushback. The clamps encircle the nose wheel again and the tug carefully lifts the Boeing. We push the Jumbo back around 250 metres, to the point where the engines can be started. First the two on the left, and then the two on the right. I’ve never been this close to running engines. The noise is deafening!

Heino gets the signal “You may disconnect”. He removes the bypass-steering pin and the communications cable before driving away from the plane. I see him waving to the cockpit with both hands. What a nice guy! 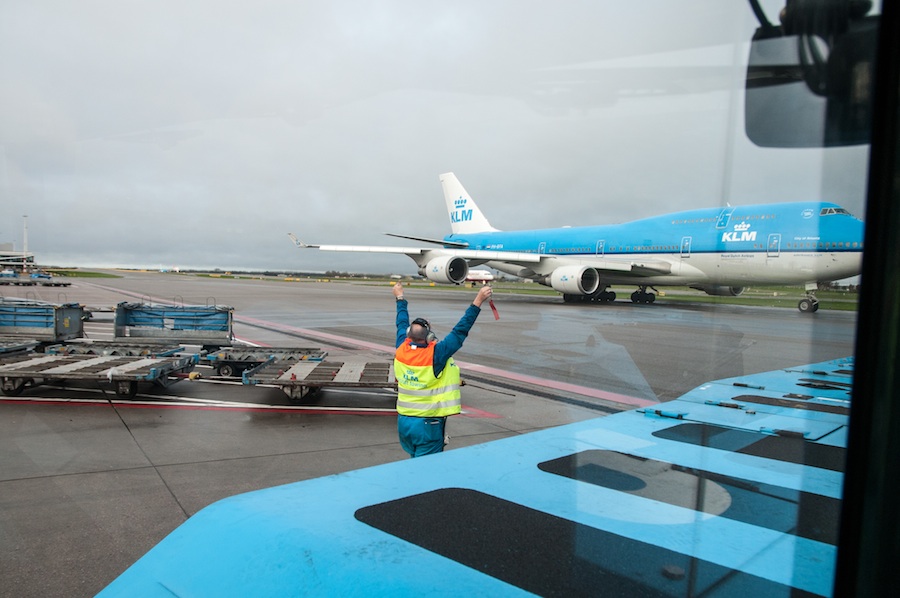 When I tell him so, he laughs. “It may seem that way, but I’m actually giving the cockpit crew the all-clear and showing them the pin, which I have just removed, so that they know they have control of the steering. This is the last moment of visual contact with the crew. All in the interests of safety.”

Towing and pushing aren’t the only things tug drivers do at KLM. They also move stairways around and connect and disconnect gate bridges. In the winter, Heino is a volunteer de-icing driver and sprayer. Harrie is also a towing instructor, training new staff. 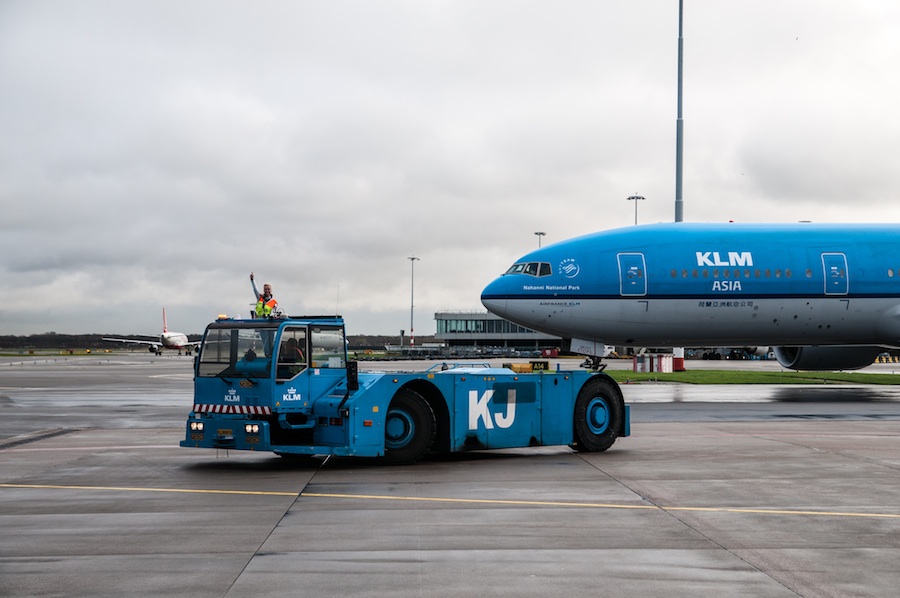 The training for all-round tug driver lasts around 21 months. Theory, practical training and solo driving are alternated with exams and airport test. Every two year, the drivers have to have to pass three exams. Operators are permitted to tow and push a maximum of seven different aircraft types, because they need to know their way around the different cockpits of all these types.

Hats off to these KLM specialists!

This is the first blog in “The ABC of KLM” where KLM employees show you their day to day work.