At sporting events around the world, like in Pyeongchang, the presence of Dutch fans is always a colourful and cheerful business. The colour is always orange. It comes from the name of the country’s royal family. That goes for the athletes and fans alike. And we – KLM Royal Dutch Airlines – are happy to cheer along with the athletic party.

We have even painted one of our blue aircraft half orange because of the event. Personally, I’ve been following the Olympics for thirty-four years. In Beijing, Vancouver, London and Rio, I experienced the games from close up. Today the Winter Olympics are starting in Pyeongchang. Will I see you there? 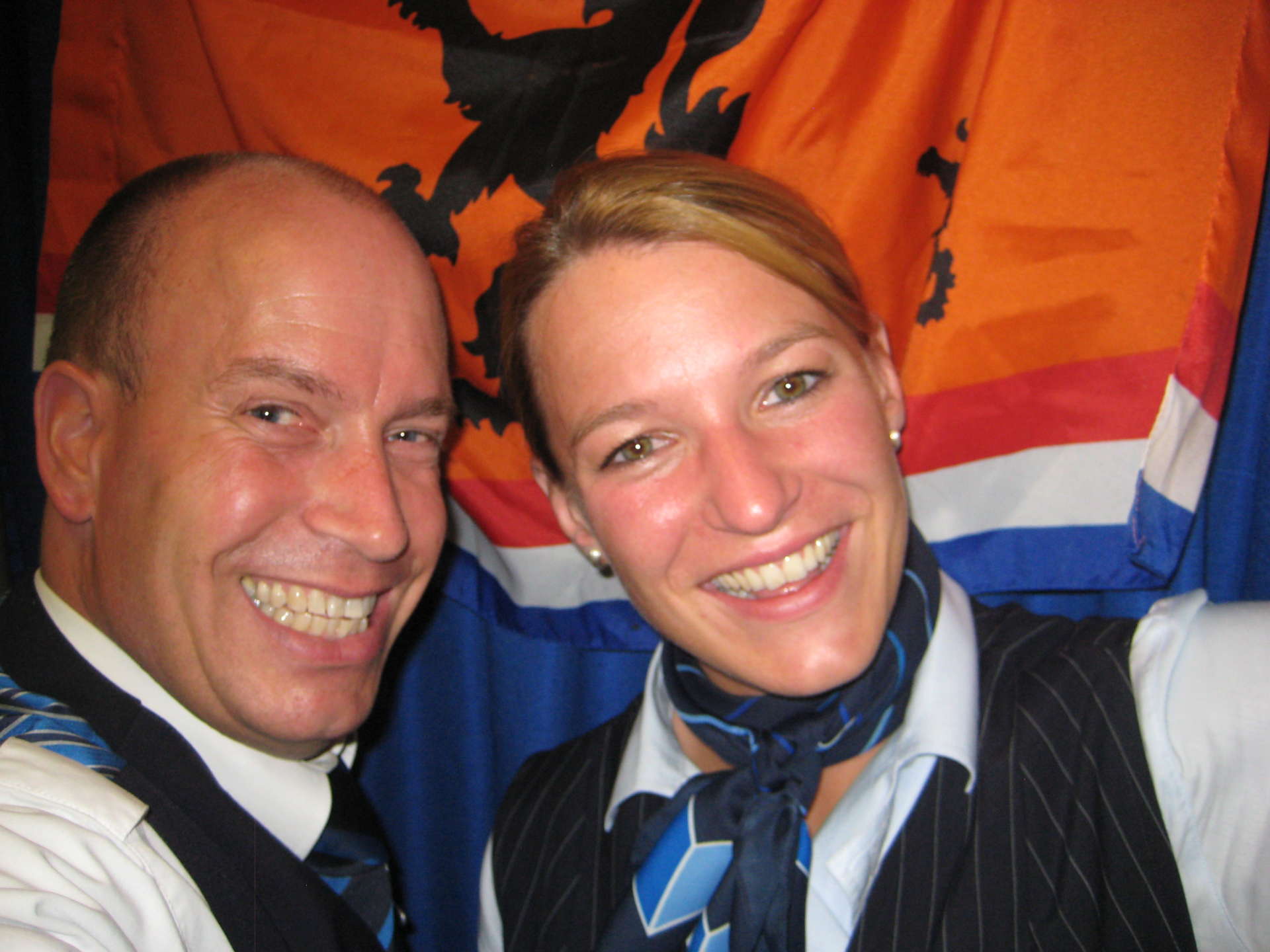 Sven Kramer, Ireen Wüst, and Jan Smeekens are just a few of the many Dutch athletes whom we’ll be cheering on. Smeekens will be carrying the Dutch flag during the opening ceremony. These three are all speed skaters, and speed skating is the most popular cold weather sport in the Low Countries. Even though the Netherlands doesn’t have any mountains, our snowboarders and skiers will be performing at great heights and are serious candidates for medals.

How can you recognise them? They’re faster than lightning, so keep your eyes peeled for their black-and-orange outfits. There will even be Dutch people at the ice hockey rink, but more about that later. 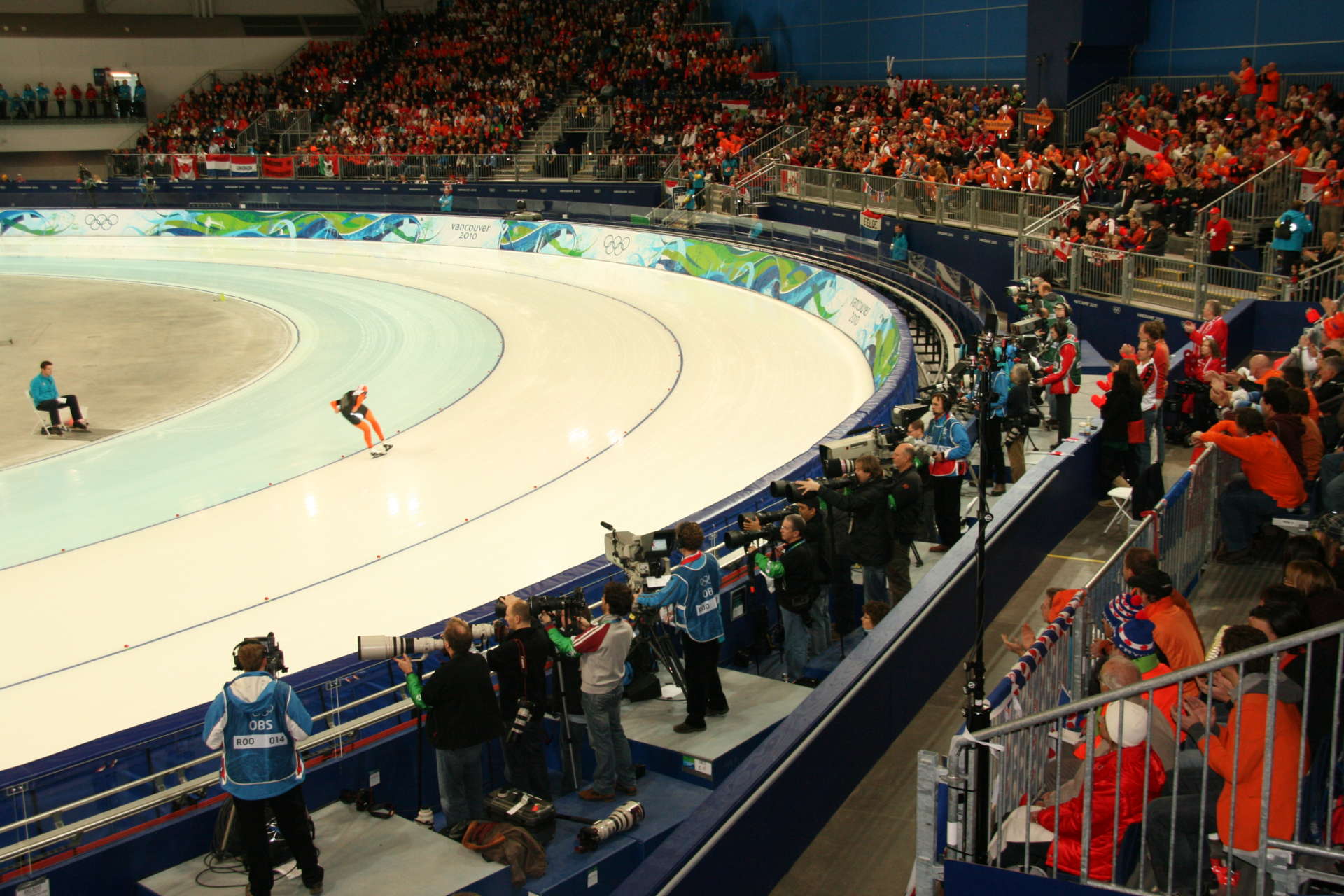 Dutch fans are unanimous in their recognisable orange outfits, whether they’re watching Formula 1 racing, soccer, or the Olympics. Some take their enthusiasm a step further and dress up as milkmaids, generals and traditional Dutch symbols such as clogs, tulips, windmills, and the Dutch Lion also feature large.

But what is most important is that these Dutch fans are noisy and cheer on their favourite athletes happily at the best and worst of times. People in the stands easily pick up the laughter and tears on the rink or track. Our own King Willem-Alexander is the country’s number-one fan. He was a member of the International Olympic Committee for years. 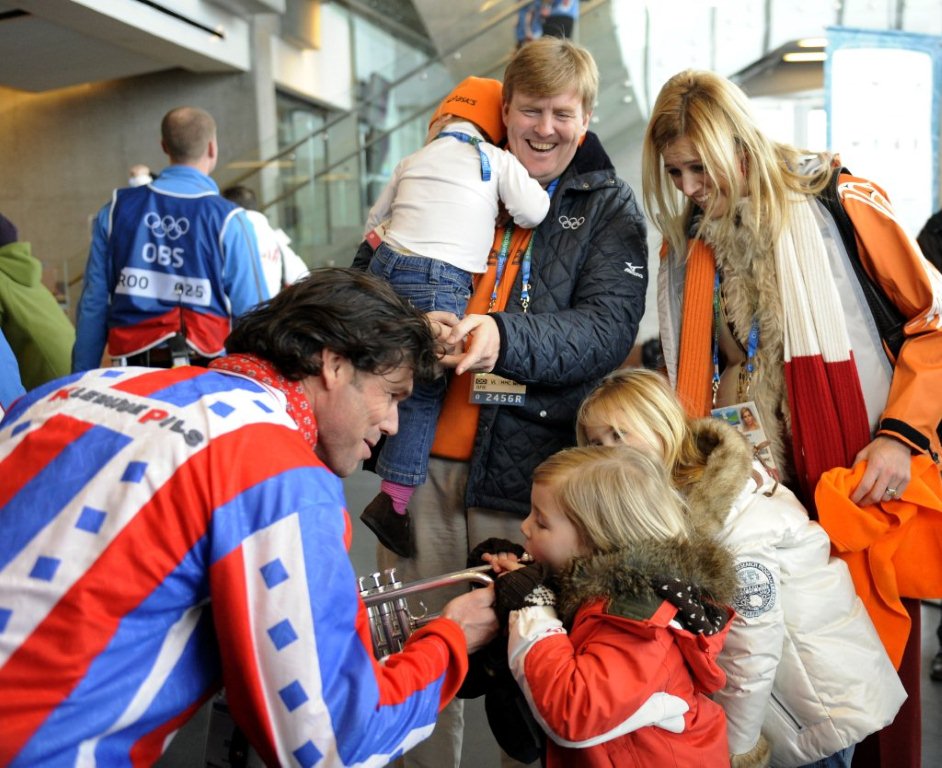 Together with his wife, Queen Máxima and their three daughters, they cheer loudest of all for our athletes. He will be there again this time. Did you know, you can also find him in the cockpit of KLM aircraft? It turns out he is a KLM colleague and an enthusiastic and expert pilot.

To get in the Dutch mood, this edition of the Olympics, it is important to know two Dutch words: lekker and gezellig. The first word is pretty easy for English-speakers to pronounce. It means (among other things) “delicious,” as in food and drink. Gezellig might be more difficult for some English-speakers as the G in Dutch is pronounced similar to the CH in Bach or Loch. So try say saying cha-ZELL-ech with the CHs rolling in the back of your throat. Gezellig refers to the warm and pleasant feeling that comes from sharing special times with friends.

Of course, lekker food always helps. Take, for instance, bitterballen – deep-fried meatballs with a soft centre – the country’s favourite snack, and accompanied by a beer for those who want to enhance the friendly atmosphere. And leave it to the Dutch to invent the Holland Heineken House. Pyeongchang will be home to this fourteenth home-from-home hosted by the famous beer brand. In South Korea, as many as 700 visitors can watch the sports every day and enjoy a snack and a drink from the Netherlands or South Korea. 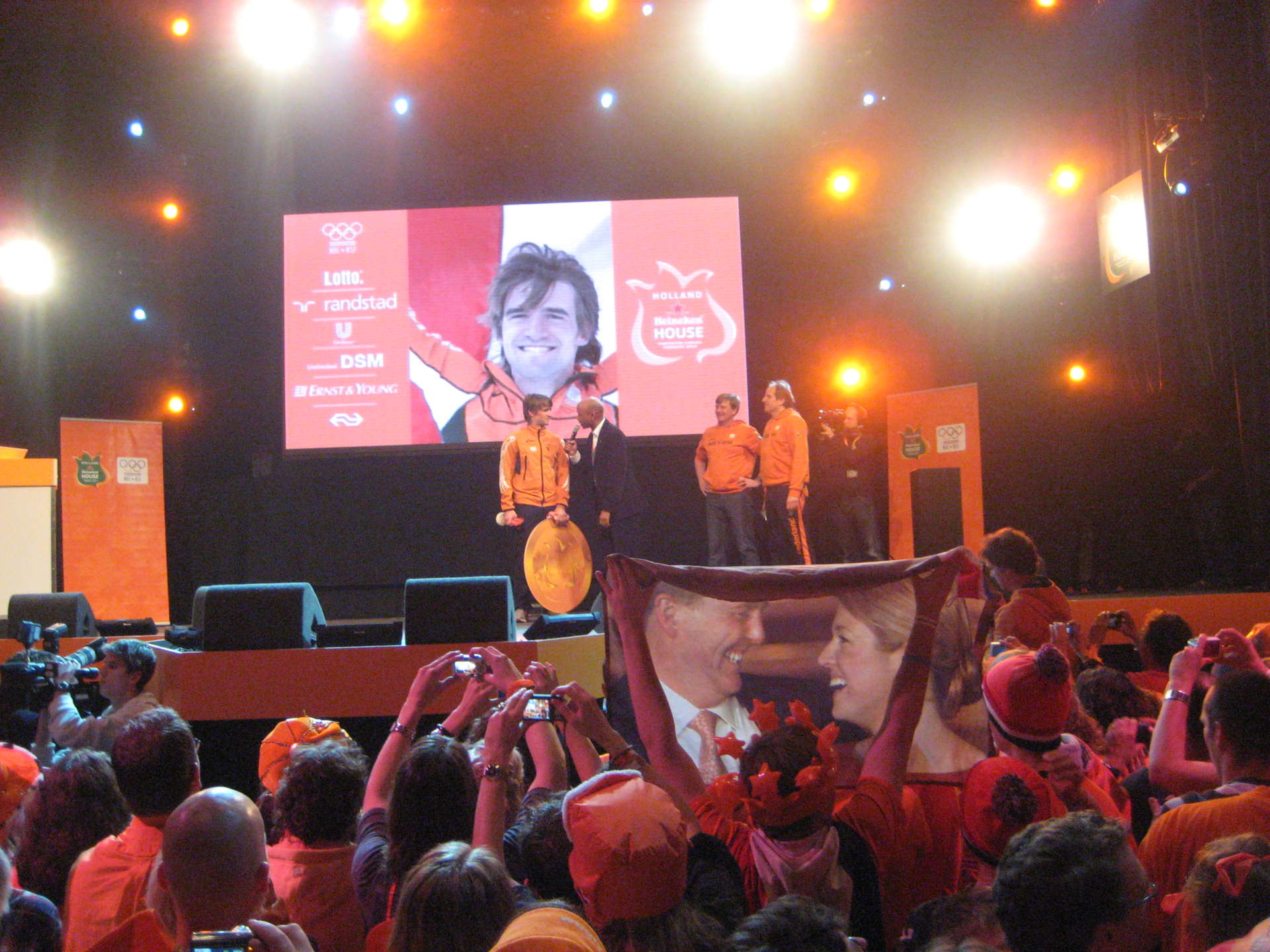 During the day you can test your own sportsmanship and in the evening the party starts in a Dutch international atmosphere complete with live artists. The most exciting part, though, is to watch the Dutch athletes receiving their honours. The fans cheer on the winners wildly, but are no less enthusiastic towards the less fortunate competitors. And chances are King Willem-Alexander will be cheering just as loudly as the rest. He enjoys taking part in the Holland Heineken House.

Both there and at the rink, there are more people willing and able to contribute to the atmosphere. There is always the amateur brass band Kleintje Pils (“half-sized beer”). The band has been active for forty-two years, now, and has been visible at major national and international sporting events – from just about every speed skating event to the final rounds of the European and World Championship Soccer. They wear red, white, and blue tunics, reflecting the colours of the Dutch flag, and you can bet that the Orange fans will be singing along at the top of their voices. 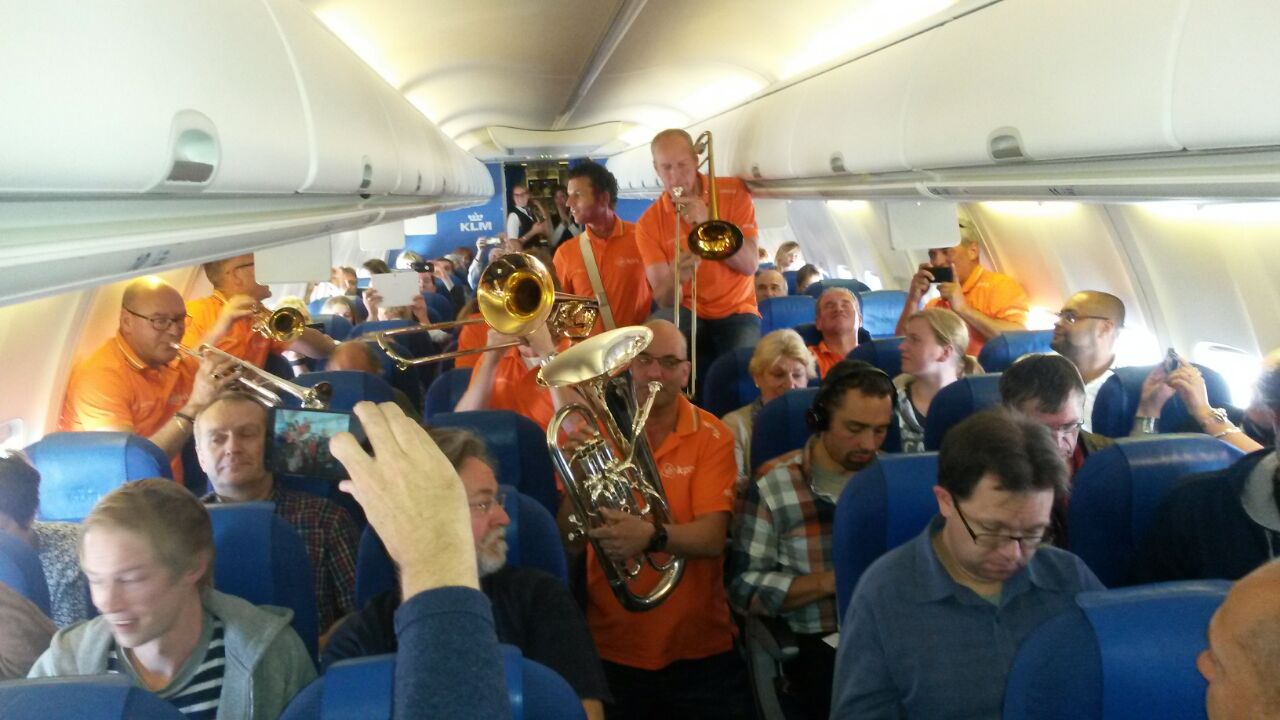 And as there will be no Dutch ice hockey team at the Olympics, the Kleintje Pils brass band will be cheering on the Korean hockey team. It turns out the Korean Sport & Olympic Committee knew the band by reputation and asked them specially to join in.

KLM is proud of our Dutch athletes. But even with all the lengthy training, a bit of luck can always give you that last push over the finish line. For that reason, on their way to Seoul, every member of Team NL will receive their very own good luck charm in the form of a little bell. Cabin crew members often hand out this Gift for Care from the Return to Sender Foundation to passengers if they have had a personal talk and the crew member wants to wish that person good luck.

Sometimes they might hand out picture postcards bearing a personal message. The Medal Flight bringing the athletes home to Amsterdam on 26 February will be our Boeing 777-300 painted in orange and blue and renamed Orange Pride. On that flight, the crew will hand out a variety of surprises – most of them orange – to the passengers. We’ll keep you posted as to what they will be. But one thing is certain. There will be fresh Heineken beer on tap.

Want to know how the Olympians experience the medal flight? You can read about it at here.

The tension grows as I head to the stadium by metro and bus with a colleague. The closer we get, the more fans we see gathering. I can read the names of countries on their outfits and I see equally excited and happy faces. Our smiles only increase as we hear groups of fans singing happy songs, joining each other in their photos, and wishing one another good luck. Sport creates an atmosphere of brotherhood. Despite the competition, fans really just want to have a good time.

I can feel the same tension when I sit in the stands, as it happens right behind the family of Ireen Wüst, who is doing her laps just a few metres away. They watch her every move and listen to the sound of her skates. How is it going? Is she going to win? And despite having ridden a great race, the audience shares Sven Kramer’s nerves as he waits in the middle circle until his strongest opponent skates the final heat.

When it’s clear that he has won gold, he jumps jubilantly across the ice. He dives over the railing to hug his family members, laughing and crying. A wave of tears of athletic happiness rolls across the orange fans. All the pain of training and competition, all of the support of their surroundings and the amazing relief from the sports fans rises from the stands. It is only then that the circle is as round as a gold medal.

For tickets to the Holland Heineken House, visit hollandheinekenhouse.nl. You can order tickets online or try at the door. Don’t forget you ID card. 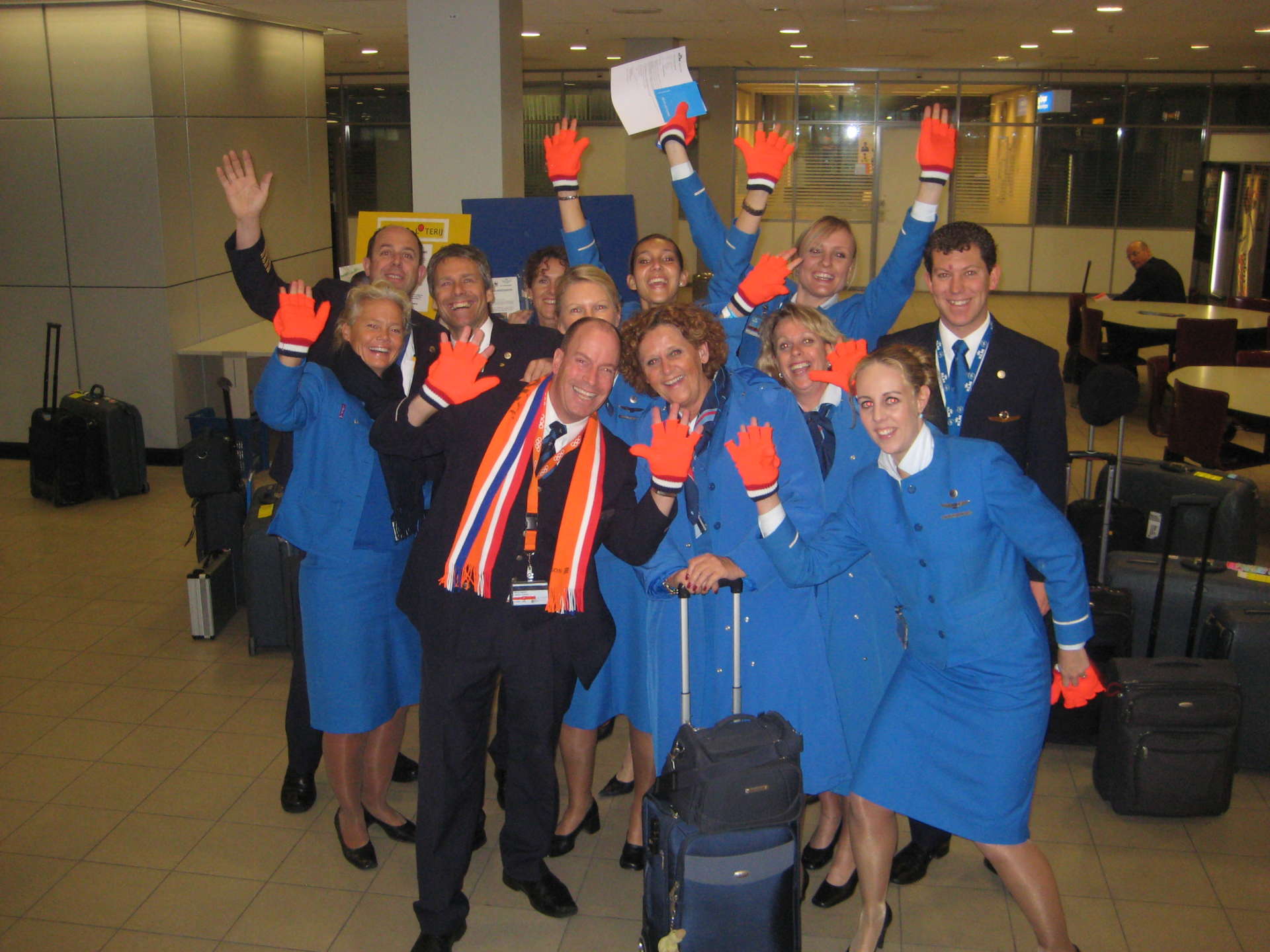 Already getting into an Olympics mood at home? You can read more in this edition of iFly Magazine.