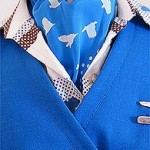 The KLM uniform is known all over the world because of its bright blue color. Wherever you go, people recognise Dutch cabin attendants and even wave to them as if they have known them since they were young.

Cliff Muskiet, a purser at KLM, has been fascinated by aviation ever since he was a small boy. Whenever he saw one of the ladies in blue, he knew that he wanted to become a cabin attendant too. He wanted to explore the world! He started to collect everything that had to do with aviation, mostly posters or other advertisements, like an illustration of two Pan Am stewardesses, one dressed in blue and one in beige. He went to the airport to look at the planes and, as a student, he cleaned airplanes to earn some extra money. In 1980, a friend of Cliff’s mother gave him a KLM uniform from the early seventies; two years later he managed to get two uniforms from other Dutch airlines and his collecting mania began. In the absence of a computer, he sent handwritten letters to airlines all over the world and to his surprise he received packages from everywhere containing uniforms or accessories.

Cliff’s dream, to become a flight attendant, came true. His work takes him to different parts of the world, allowing him to trace even more items. Life is much easier for a collector nowadays! There is no such thing as writing letters anymore. Via e-mail, Internet auctions, or simply travelling, a collector can find just about anything that’s missing from his collection. And when he expects it the least, miracles happen and beautiful accessories come his way. Just a few years ago, through an Internet auction site, he managed to get his hands on the exact two uniforms from the illustration of the Pan Am stewardesses from his childhood.

His collection will never be entirely complete: there will always be missing items. His biggest wish now is to write a book.

For more information and to admire the beauty of airline uniforms from around the world, go to: http://www.uniformfreak.com