In the summer of 1969, the gay residents of New York’s Greenwich district were fed up with yet another police raid on the gay bar Stonewall Inn. After years of marginalisation, excessive police violence was the last straw. In New York, spontaneous uprisings arose, followed by a movement that marked the birth of the modern worldwide Gay Pride. In the Netherlands, this has grown into the Amsterdam Pride, with the Canal Parade as highlight at the end of the week. In this blog, I reflect on how KLM celebrated this year’s special fiftieth anniversary of Stonewall.

In 2010, KLM staff founded the KLM Over the Rainbow network organisation. The board of this organisation is committed to promoting diversity and inclusion within KLM. As in any large company, KLM consists of a colourful mix of employees from different backgrounds. KLM strives for a culture in which every employee feels valued and safe.

In June 2019, KLM hosted the annual Workplace Pride Conference. This non-profit organisation aims to improve the working conditions of LGBTI employees worldwide. It tries to encourage companies to give their employees enough space and confidence to be able to be themselves, and to feel appreciated. The greater goal is to raise the overall level of acceptance and to serve as an example for others. At KLM, serious steps are being taken in the right direction, for example by making space for initiatives that positively impact the acceptance of LGBTI employees. Together with Air France, we participated in the annual Gay Parade through the streets of Paris.

Following in the footsteps of other airlines, KLM purser Tasos Papaioannou suggested sending an all-gay crew to New York earlier this year. In so doing, he wanted to contribute as a company towards celebrating the Stonewall demonstrations. On 28 June this year, his idea became a reality. That morning, the proud crew of the flight stood at the ready in the crew centre to fly off to the Big Apple. Tasos called it a step in the right direction. However, he indicated that the battle towards full acceptance has yet to be waged. “Nevertheless, these kinds of initiatives are a great development,” he emphasised. 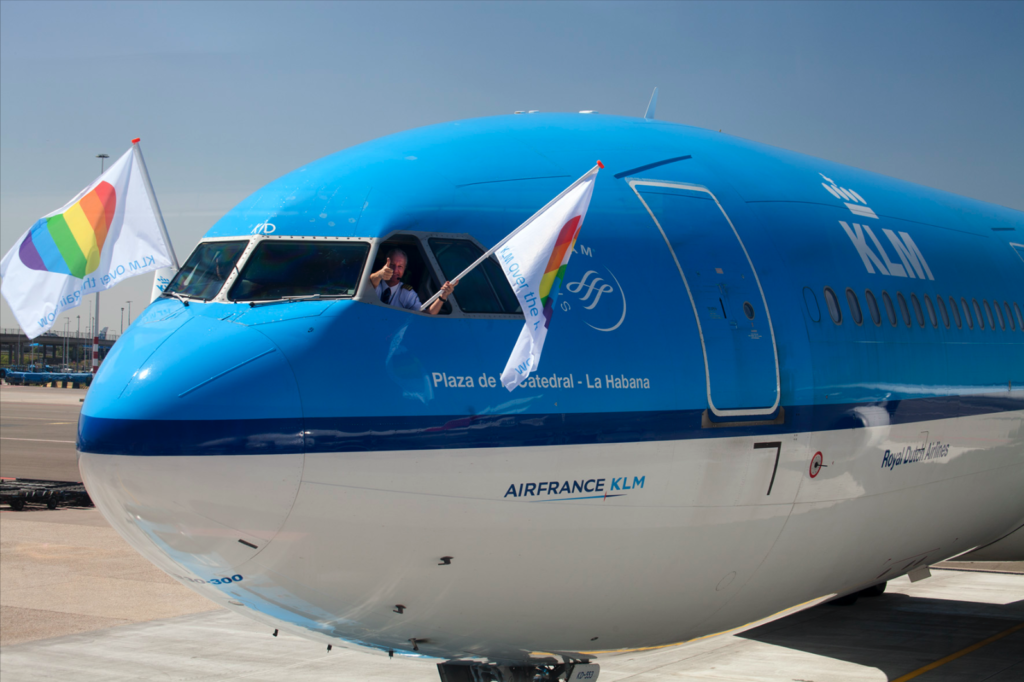 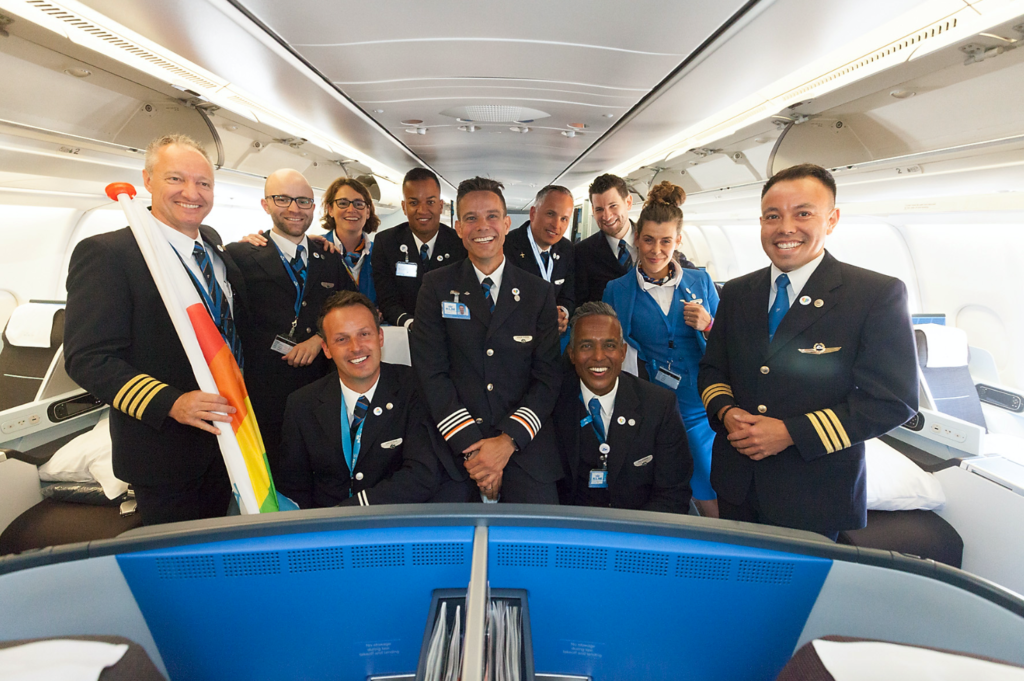 On 2 August, Over the Rainbow organised the Journey of Progress tour and I was lucky to be part of it. The tour made its way through the city centre of Amsterdam, and local guide Henk spoke about the origins, development and the current status of the LGBTI community in Amsterdam and the Netherlands. The tour was truly exceptional as it also embraced twenty influencers from eight different countries. Invited by KLM, the influencers were welcome to enjoy Gay Pride in Amsterdam and taste the atmosphere.

First stop was the Homomonument. Henk used this moment to set the scene. He spoke about the monument itself and the first gay wedding in 2001. Second stop was the first bridge over the Keizersgracht, to catch a glimpse of the famous Jordaan district and then on to the Prinsengracht, where the Canal Pride boat parade took place. Third stop was the Royal Palace and the National Monument at Dam Square. In the 17th century, the so called Burgerzaal (Citizen’s Hall) was an unofficial meeting place for gay men, back in the days when you could still be sentenced to death for homosexuality in the Netherlands.

Around the time of the Stonewall Protest in the US, a group of Amsterdam LGBTI activists approached the War Commemoration Committee with a request to lay a wreath for LGBTI soldiers. This was not allowed at the time. The activists laid the wreath anyway and were arrested. In 1987, the Homomonument was created, the first of its kind in the world. Henk read a poem by Dutch writer Gerard Reve, who was gay and almost went to prison for one of his books. Reve was also instrumental in changing a particular discriminatory law.

As we walked through the Warmoesstraat, Henk explained that this street (and another street nearby) were absolutely unique in Europe, as they offer a safe space for the LGBTI community to go out. The final stop was Cafe ‘t Mandje, which is a classic “gezellig” cafe and the oldest gay bar still running in Amsterdam. Speaking openly, Henk said acceptance is anything but a matter of course and that there’s still a great deal to be done. 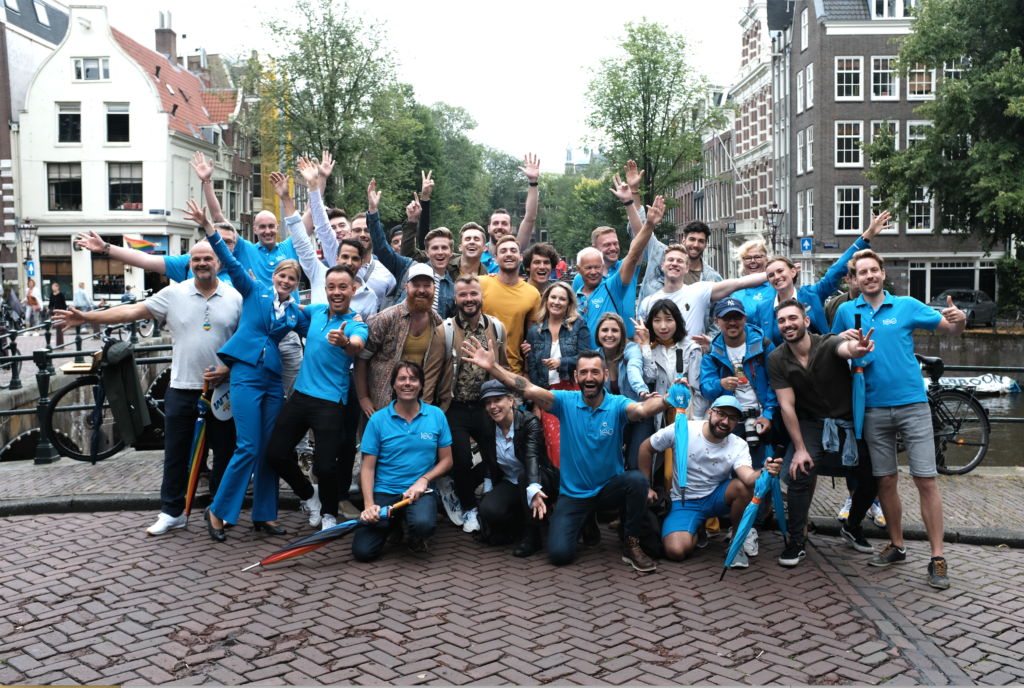 Labels are for baggage, not people

Fifty years after Stonewall, significant progress has been made in the area of LGBTI rights. The emergence of Over the Rainbow and different LGBTI events indicate that a large company like KLM is also working on diversity and inclusion. As purser Tasos rightly pointed out, the ultimate goal is to be accepted to such an extent that the battle no longer needs to be waged. After a successful catch-up in 2019, I am looking forward to an even more diverse 2020! Because, let’s face it: “Labels are for luggage, not for people.”