Over the past hundred years, so much of life in the KLM operation has been recorded on photosensitive plates and film. The result is an enormous collection of images of the airline’s special moments. These days, KLM’s historical photographs are in the care of the Maria Austria Institute (MAI) housed in Amsterdam’s City Archive. In this blog I join my cabin colleague and MAI archivist Cecile Ogink to take a look at a few special images from this collection. 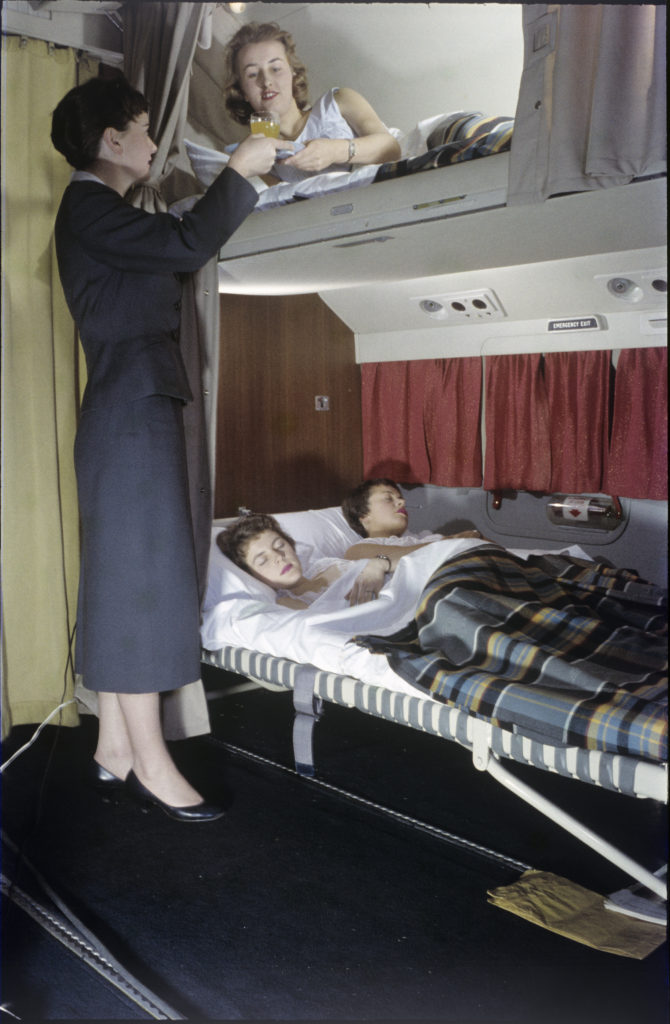 Castles in the air

Nick: “This photo was taken on board a DC-6 in 1948. KLM had just one travel class up until 1952. Everyone sat in the same kind of seat and was served the same menu, apart from in a few Constellations, which had reclining seats in Cosmopolitan Class, and the DC-6, which had seats that folded out into beds with an extra berth above. The Constellation’s Cosmopolitan Class thus transformed a small part of the aircraft into a sleeping compartment. Comfortably equipped with pillows and blankets, these aircraft transformed into veritable dream flights at night. Cosmopolitan Class, however, soon proved unprofitable and was dropped, although a few reclining seats were retained in the Constellations for a while longer. This image reminds me of the onboard rest areas for cockpit and cabin crew we have today, which you can read more about in this blog.” 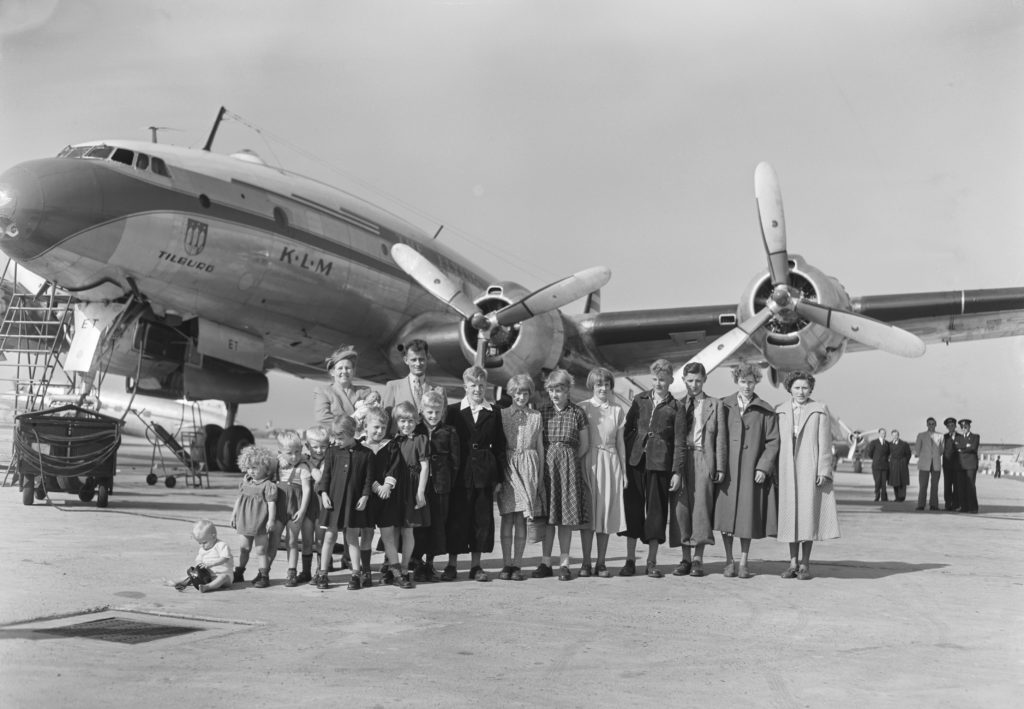 Family history in pictures: “All for one and one for all”

Cecile: “This image immediately grabbed my attention. Here’s a family with no fewer than seventeen children and a KLM aircraft in the background. It bears a very brief description and mentions the common Dutch surname Scholten. That’s all I knew about this picture. But that soon changed when I showed it to my parents. My mother immediately recognised her uncle and was able to name the children too. ‘Oh, that’s Bertus and there’s Sientje…’ What were the odds? To have found this of all pictures among no fewer than 250,000 images in the KLM photo archive.”

So now we know that this is a picture of the Scholten family, who emigrated to Canada on 1 May, 1952. A family of 17 children with father Alexander and mother Maria in the lead. My grandfather Herman was Alexander’s brother. Paula, the youngest of the family, was only three weeks old when the photograph was taken. Apparently it took all Alexander’s powers of persuasion to get the authorities to add the newest member of the family to his passport so close to their departure.

Maria and Alex were extraordinarily generous people from equally generous families. During the Second World War they defied the Nazis by sheltering Jewish children and providing food for people in their neighbourhood. They did this with Alex’s flamboyant sister, Aunt Truus, who was renowned for her underground escapades.

Maria and Alex had their own business, which they had to close down after the war due to lack of income. Taking up farming again in a densely populated country was no longer feasible, but Canada offered a solution. Not only was there plenty of space, the country was welcoming immigrants with open arms. It even paid their travel expenses, as long as the families met certain criteria.

“After discovering this photo, I contacted some of my distant relatives. From conversations with them, I learned that their first few years had not been easy. Fortunately, however, everything worked out in the end.” 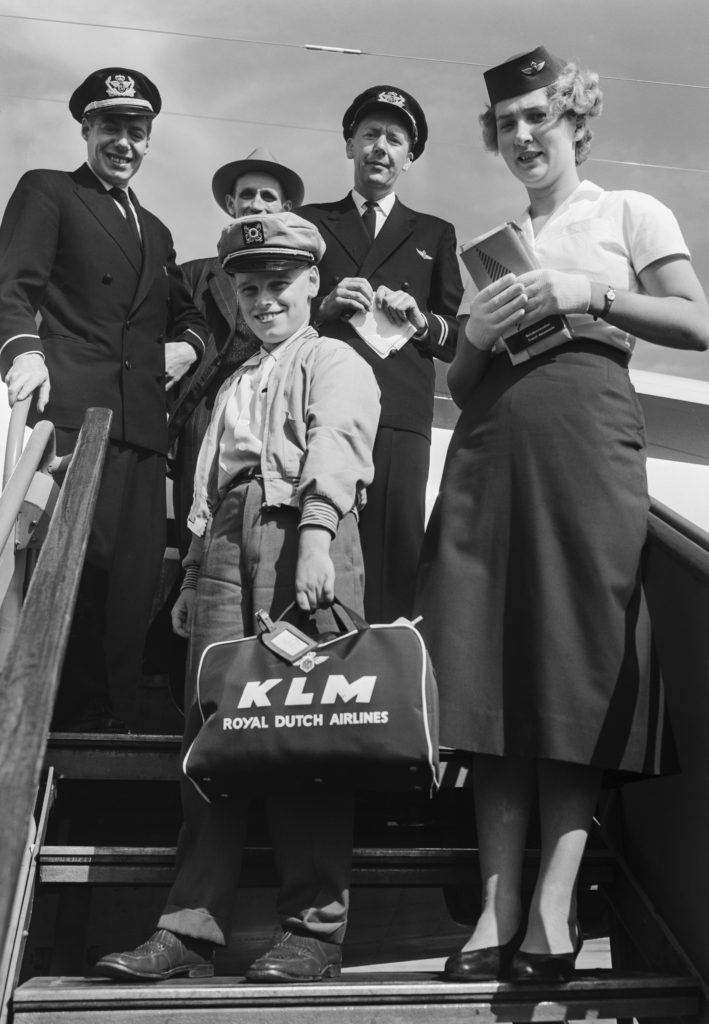 Nick: “Ronnie Colthof has lived the Canadian version of the American Dream. In less than two years of working as a newspaper boy, he saved enough money to buy a return ticket from Montreal to Amsterdam in 1957. He was eleven years old. His parents allowed him to spend his savings as he saw fit. After buying a television and a pet bird, he fancied the idea of visiting relatives in the Netherlands, from where his family had emigrated four years earlier. Upon arrival at Schiphol the press wrote, ‘Stewardesses and journalists wanted to take care of the little boy travelling alone. But with a wave of his hand he rejected their help. He was man enough to take care of himself. He spoke to the journalists in broken Dutch like an accomplished diplomat’.”

Minors are still allowed to travel unaccompanied today under certain conditions. Special assistance at the airports has to be requested during the booking process and the cabin crew has to take extra care of the child on board.” 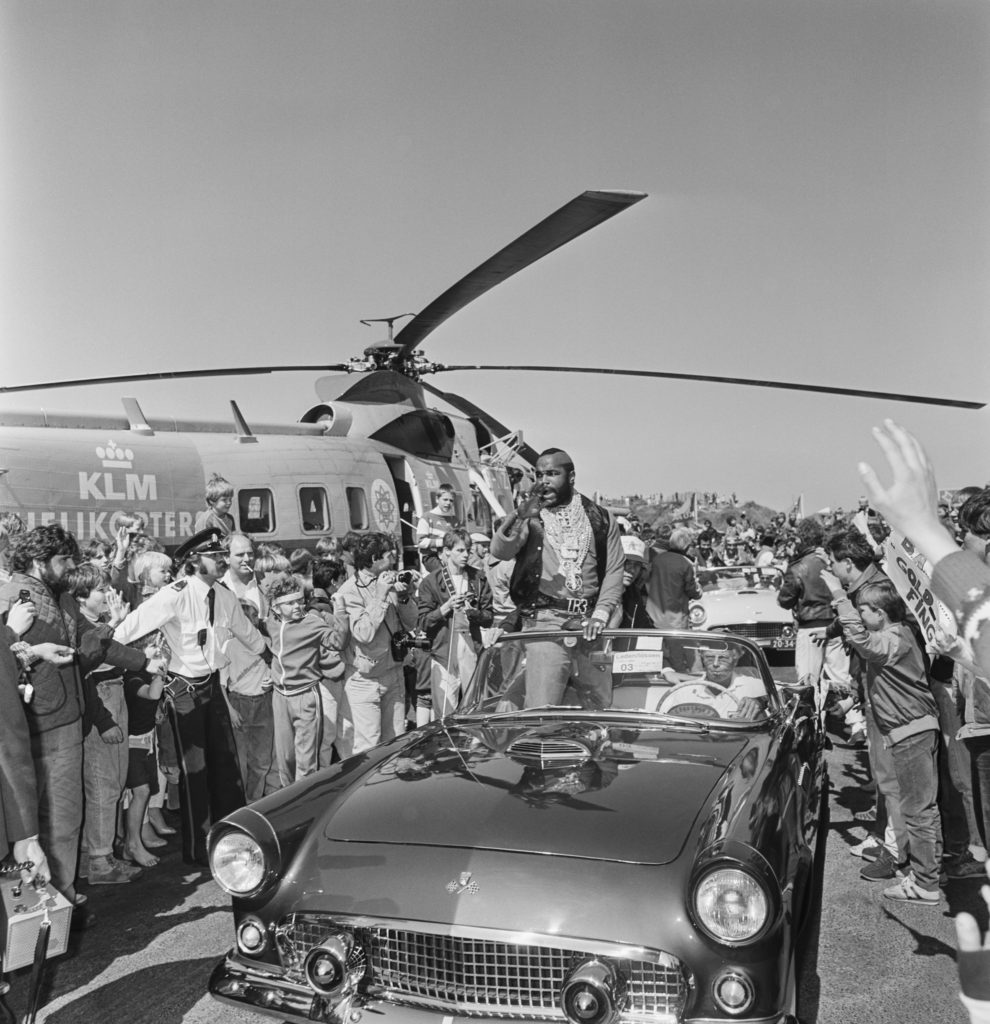 The A-team in the Netherlands 1984

Cecile: “Here’s a picture of the rough-tough Mr. T from the immensely popular TV series ‘The A-Team’ from the 1980s. From its very beginnings, KLM has carried national and international celebrities. In 1984, KLM was commissioned to carry the A-Team cast by helicopter to numerous Dutch locations during their worldwide tour. That’s right. Between 1965 and 1998 we also had helicopters in our fleet.”

The helicopter was scheduled to land in Sneek, Harderwijk, Texel, Zandvoort, and Valkenswaard. The actors were meant to meet fans according to a special programme at each location – except it didn’t quite work out that way.

A one-hour programme had been prepared for Sneek, but the actors had to return to the helicopter after just five minutes, because their safety was at stake. More visitors than expected showed up – 25,000 more! The A-team cast hadn’t expected it to be that busy. “This is our first overseas tour. We knew we were popular, but in these numbers, it’s downright frightening”, they said afterwards. However, the turbulent trip did produce some pretty special images.”

As a social media content designer, I basically see our KLM logo every day.…