As a child, I saw it from the window of my mother’s car, every Sunday, driving to my grandma’s house: a big building just across the road from Madurodam, the miniature city in The Hague. I saw it, but knew very little about it. I later discovered that this was KLM’s third head office, partly completed just before the Second World War and extensively extended soon after the war ended.

As KLM flourished, it was just a matter of time before the offices on the Hofweg would become too small. It was time to move, but KLM founder Albert Plesman wanted to keep the head office in The Hague, close to the political fire in the heart of the country. The Municipality of The Hague helped find suitable land on the edge of the St Hubertus dunes, alongside one of the city’s arteries, the Raamweg. 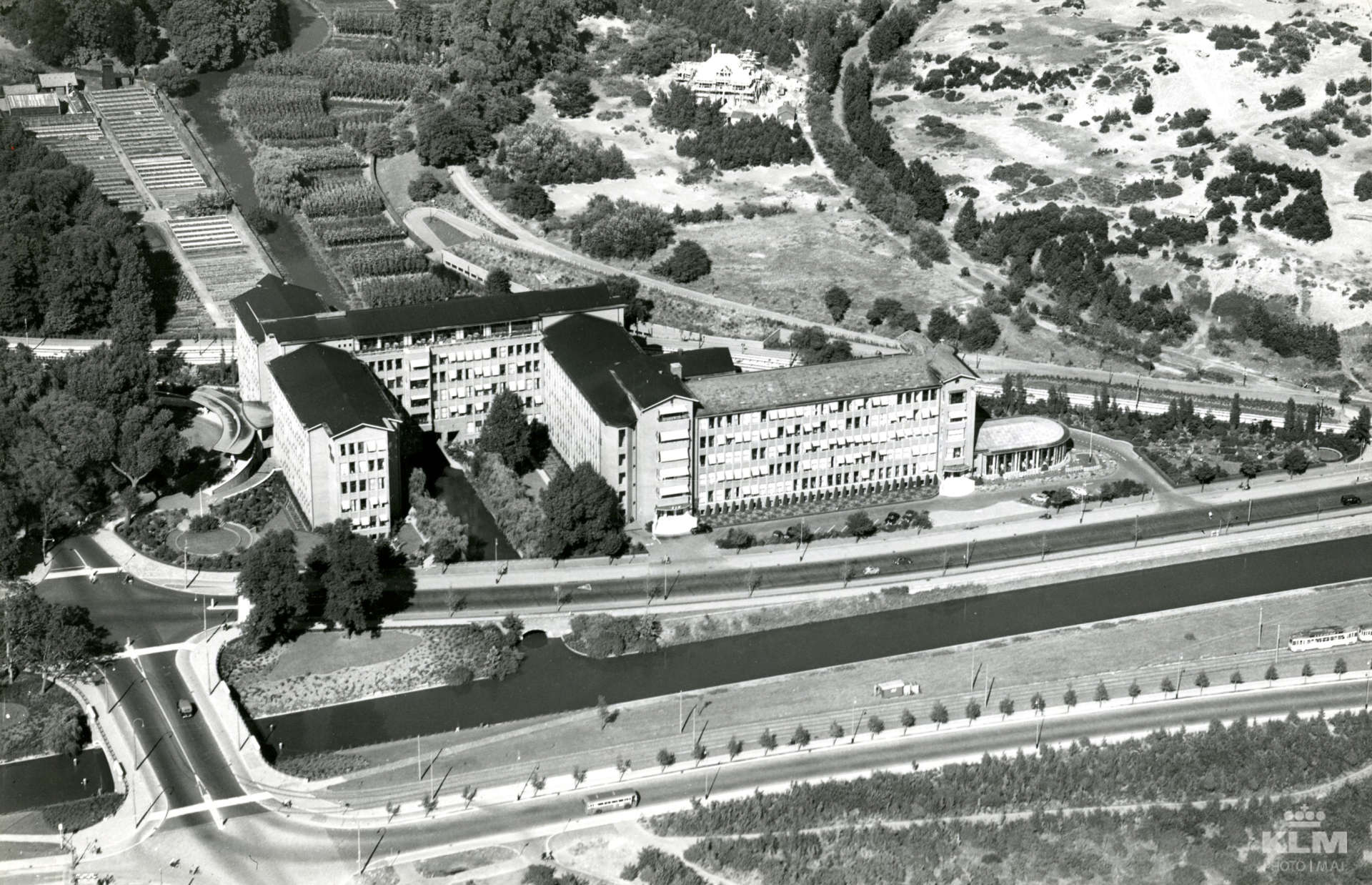 Architect Dirk Roosenburg, who also designed KLM’s first logo, was commissioned to design the new office building. Roosenburg had a head start on his competitors as he had been to school with Plesman, who had also commissioned him to design the exhibition pavilion at the ELTA Air Show in Amsterdam North in 1919. 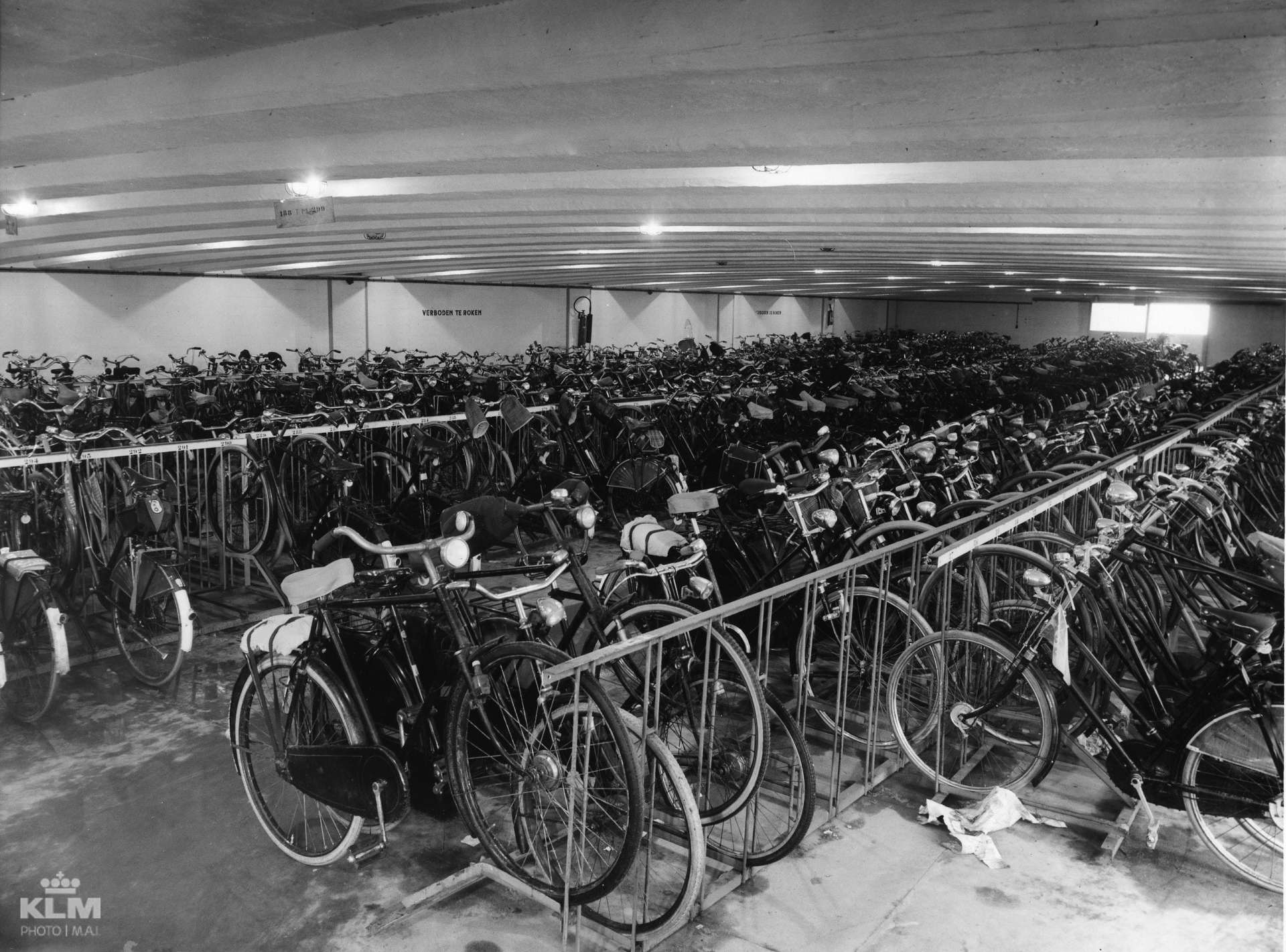 Apart from housing 1,800 employees, the new head office had to meet various other specifications, including a stylish wing for the board, a medical unit with an x-ray room, a fully equipped gym, a library, kitchens, a canteen, several shops (including a hairdressers), bike sheds and a parking area for cars. There were also two houses on the grounds; one for the technician who looked after the central heating and other installations, the other for the concierge.

The first part of the building, facing onto the Raamweg, was completed in 1940. This section included a rounded wing containing the multifunctional recreation hall, where KLM’s first computer was later installed. Construction came to a standstill when the Netherlands was occupied during the Second World War. Between 1940 and 1943, the offices were rented out to the Ministry of Social Affairs, which was in need of extra space. 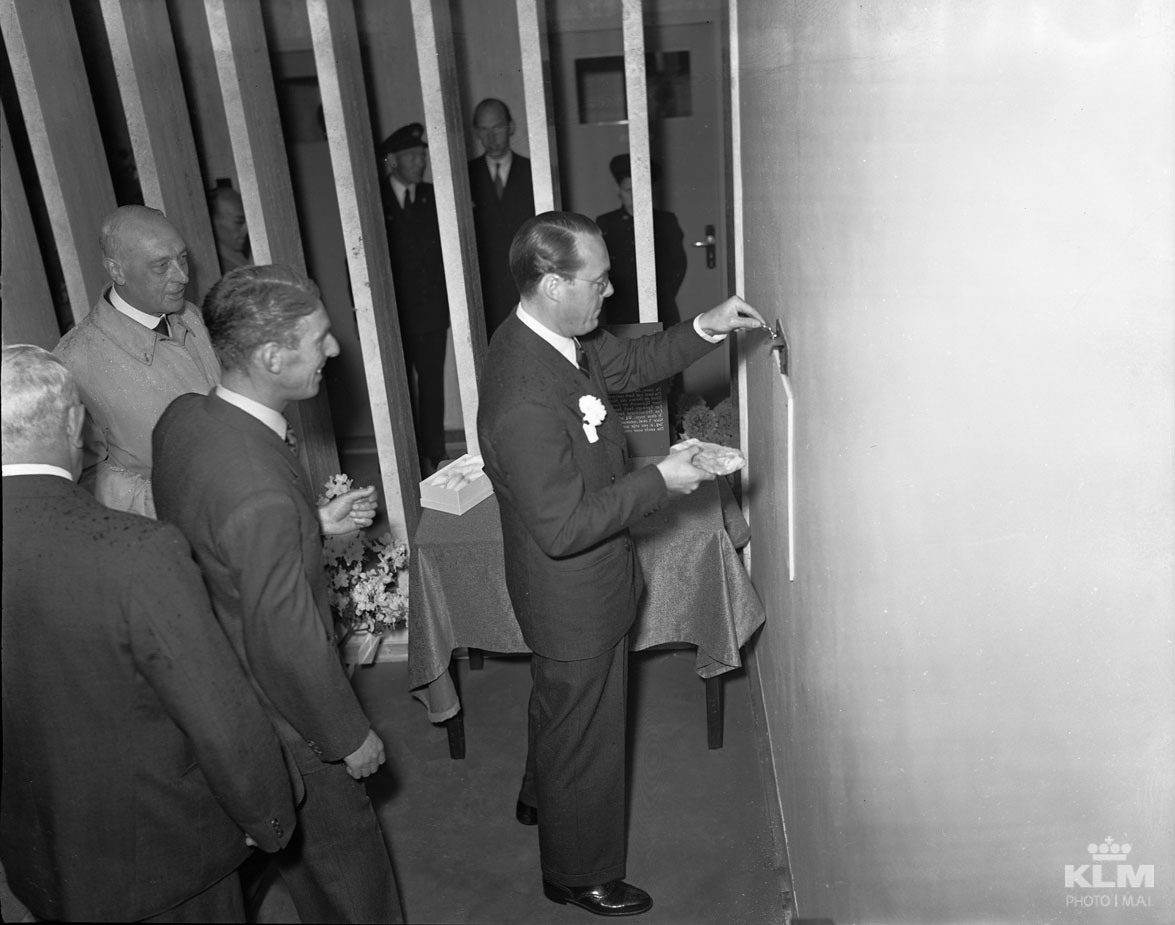 The building was returned to KLM in 1945 and construction was resumed in 1946. The complex as it is today was opened in 1949. On 24 May of that year, Prince Bernhard laid the last stone, which was rather special as it had been brought in from New York, formerly known as New Amsterdam. The stone had been brought there from the Netherlands in the 17th century and had been donated to the Museum of the City of New York by President Roosevelt in 1933. This museum, in turn, gave the stone to Princess Juliana in 1946 to mark the opening of the Amsterdam-New York air service. The museum asked that she find a suitable location to display the stone, which eventually ended up in KLM’s head office. 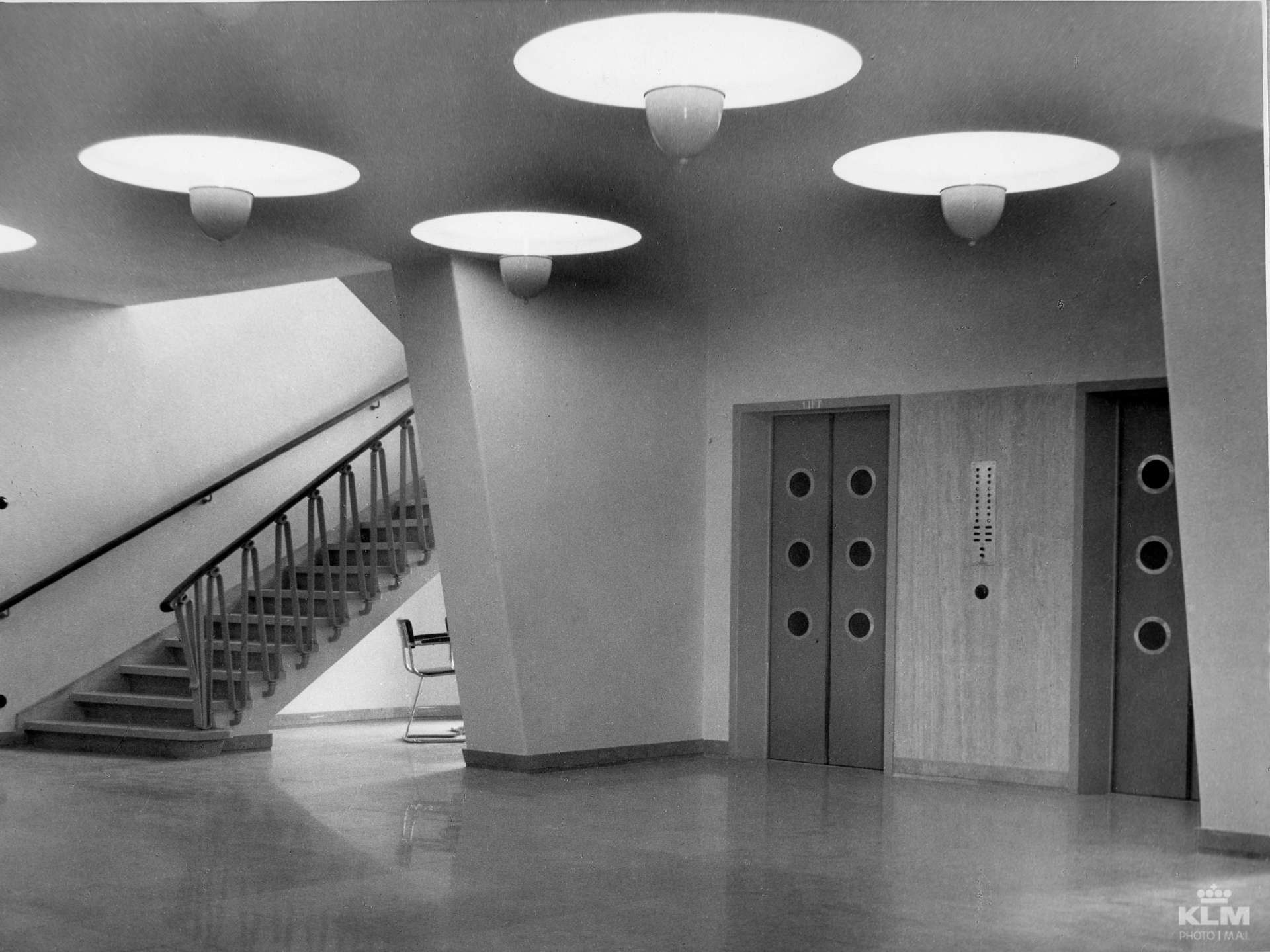 Ministry of Infrastructure & the Environment

The main entrance was subsequently moved to the side of the building, on what was then known as the Badhuisweg but was later renamed Plesmanweg following the death of KLM’s founder. 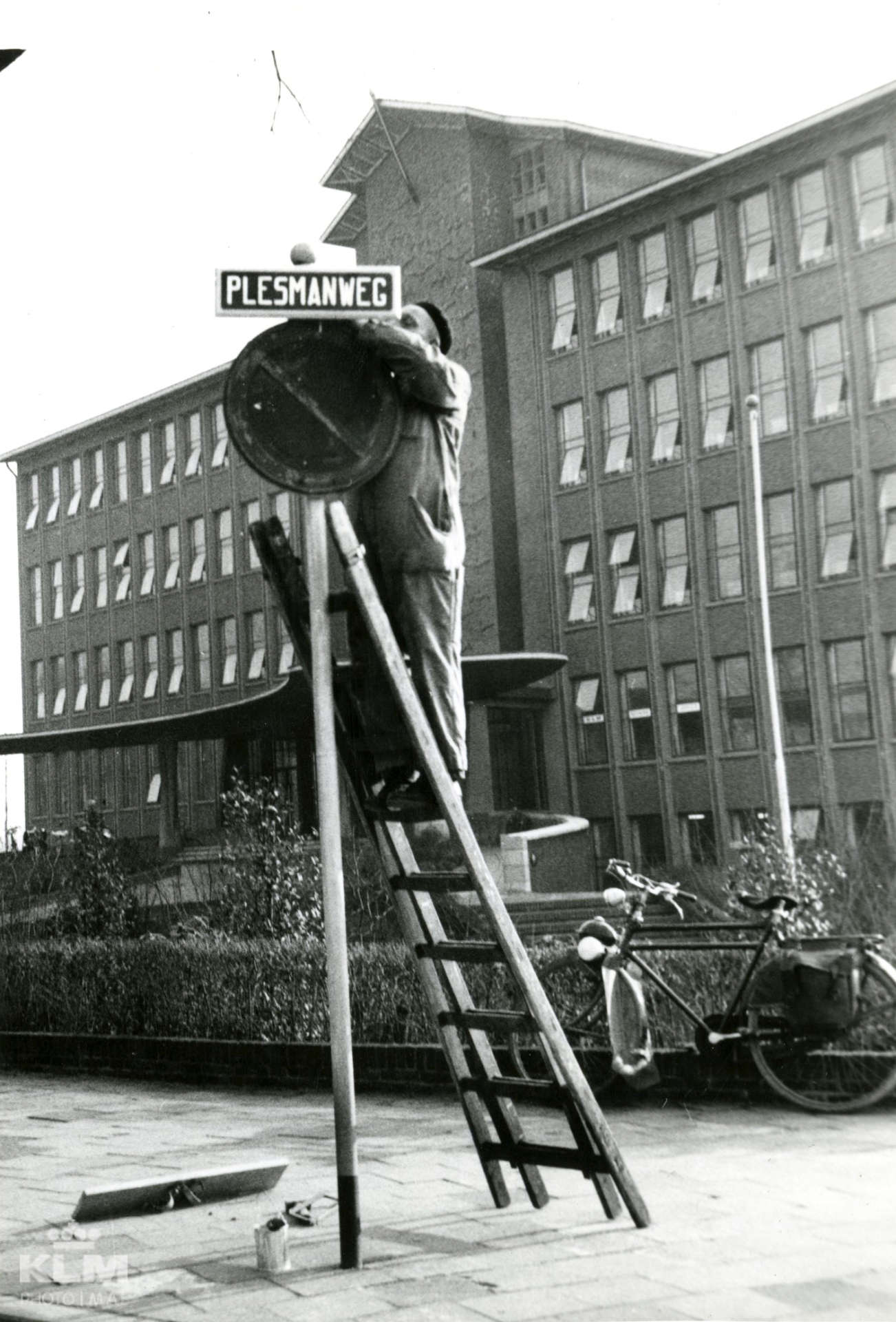 The building had a steel superstructure that allowed large windows to be installed, ensuring plenty of natural light in the interior, which also has a lot of glass walls. The panelling along these walls was low to ensure maximum light, but I suspect it also gave the boss a better view of his staff.

KLM moved out of this building in the late 1960s and the board temporarily took office in Schiphol East, awaiting the completion of the new head office in Amstelveen. The KLM office in The Hague was subsequently occupied by various different tenants and currently houses the Ministry of Infrastructure & the Environment, aptly reflecting our changing times.