KLM will expand its network this summer with 7 new destinations, including Genoa. The city where the smell of fresh basil greets you on arrival. In the world capital of pesto, no pasta dish is served without this crushed sauce and a consortium stringently monitors the quality of this “green gold”. We will be flying there from Schiphol Airport as of 22 April.

Christopher Columbus could smell from the aroma of fresh basil that his ship was nearing the Port of Genoa. After months of surviving on ship’s biscuit, fresh vegetables were a meal fit for the gods for medieval seafarers. Even after half a millennium, pesto remains inextricably linked to Italy’s largest port. Since serving as Europe’s cultural capital in 2014, Genoa has put paid to its dark and grisly image. Nowadays, the city boasts a raw beauty that is difficult to quantify: you have to experience – and more particularly taste – it for yourself. Welcome to Genoa, welcome to the world of pesto genovese. 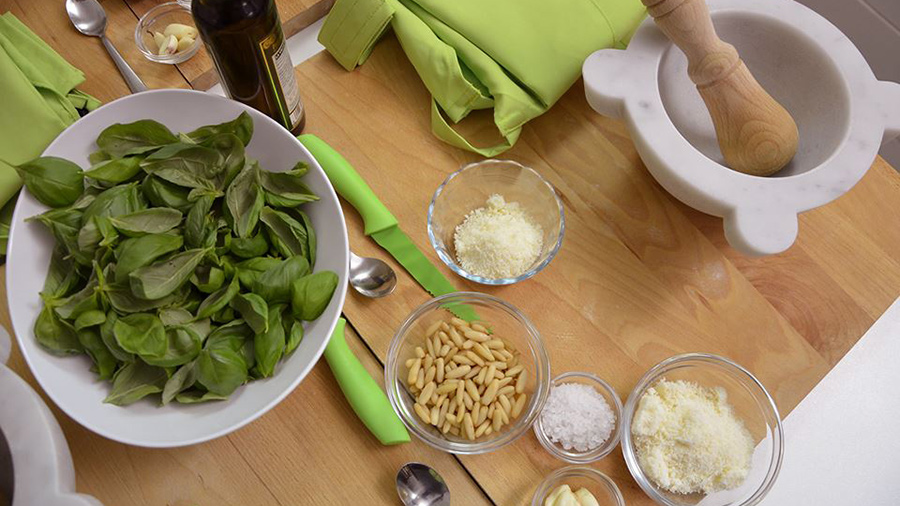 Genuine pesto genovese does not come from a factory, but is crushed by hand

The old harbor: the homecoming kitchen

The story of Genoa’s most important export product starts at the old harbour, where the smells of fish and basil have been struggling to win the upper hand for centuries. Nowadays, Porto Antico is a modern harbour area with a broad boulevard and plenty of attractions – a place for young and old to enjoy a day off. It’s easy to imagine how the seafarers felt when greeted by all the fresh vegetables and herbs after being at sea for months on end.

For this reason, the cuisine of Liguria – the region in which Genoa serves as the capital – earned the following nickname: “la cucina del ritorno”, or the homecoming kitchen. At sidewalk cafés, Italian families enjoy “their” pesto genovese throughout the day; elsewhere in the harbour the smell of fresh fish wins the upper hand over fresh pesto. Enough parading: from the harbour, you can stroll right into the mediaeval labyrinth. 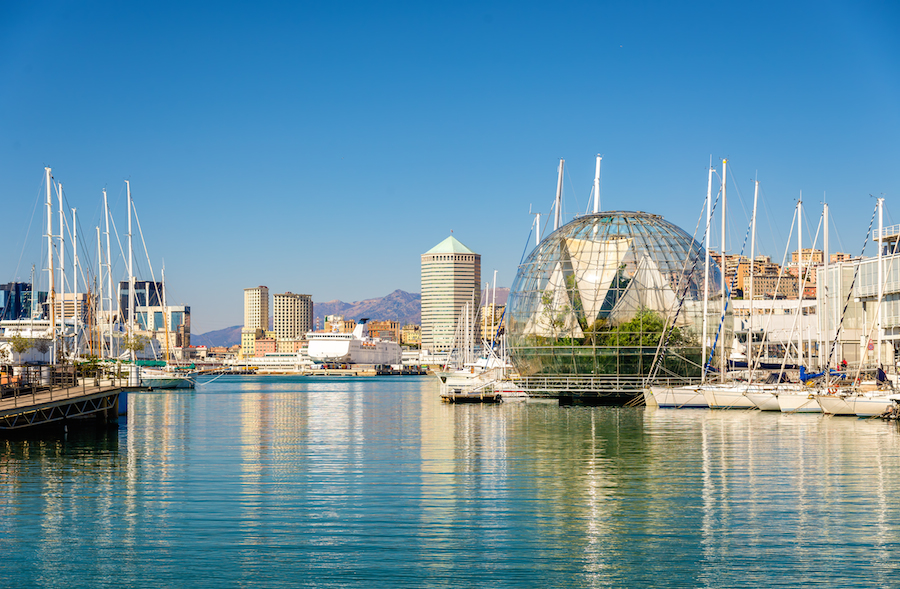 It’s easy to lose your sense of direction in Europe’s biggest mediaeval city centre. The city backs up onto the surrounding hillside, with a maze of winding streets and stairway alleys making it look much like one of the Dutch artist Escher’s optical illusions. Luckily, the Genoese are friendly and patient when asked for directions – in Italian of course.

Through the labyrinthine street pattern, you eventually find yourself at the monumental Piazza Matteotti, with the eye-catching Doge’s Palace. This venue hosts an event that proves beyond doubt that preparing the perfect pesto is an unrivalled art form in itself. Every two years, 100 contestants from around the globe pit their skills against one another to earn the prestigious title of “world champion pesto maker”. In 2014, 86-year-old Alfonsina Trucco emerged victorious with her marble mortar and wooden pestle. The next world championships are scheduled for 2016. 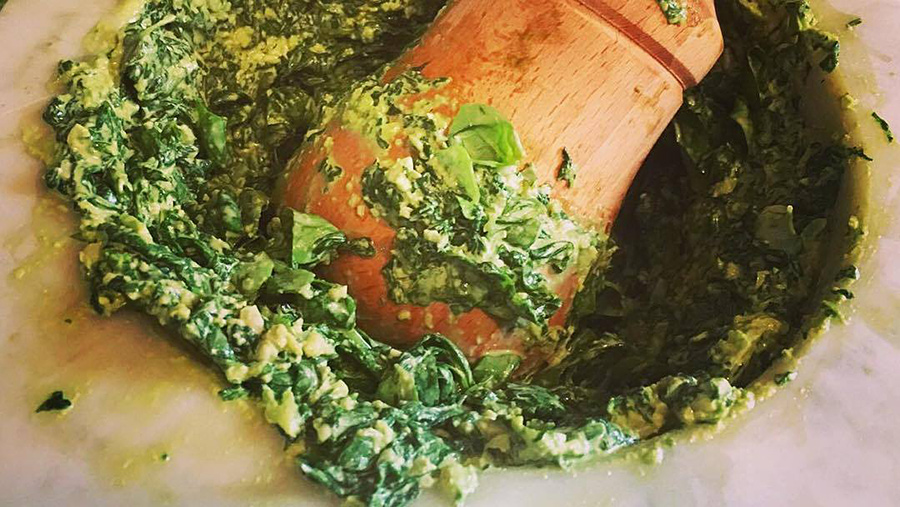 The best pesto is made in a marble mortar using a wooden pestle (photo: Stefano Goldberg)

Maxelâ – a butchery and restaurant rolled into one – is one of the best places to taste pesto. From behind the stone-arched bar, the owner Cristina shares the secret of her pesto genovese. The traditional pesto is made from fresh basil leaves grown in the Genoese neighbourhood of Pra, extra virgin olive oil from Liguria, Italian pine nuts, fresh garlic from the Arroscia Valley, coarse sea salt from Naples, pecorino sheep’s cheese from Sardinia and parmesan cheese from the Province of Parma.

With pride, the lively Italian explains how the circular movement used to crush the basil leaves is essential to create the perfect texture. After all, the name “pesto” comes from “pestare”, the Italian word for “crush”. A food processor or blender would be considered blasphemous in this Mecca for pesto lovers – genuine pesto is crushed by hand. The traditional recipe is certified and compliance is monitored by a bona fide consortium: Il Consorzio del Pesto Genovese. The green gold should definitely not be mistaken for inferior factory made pesto. 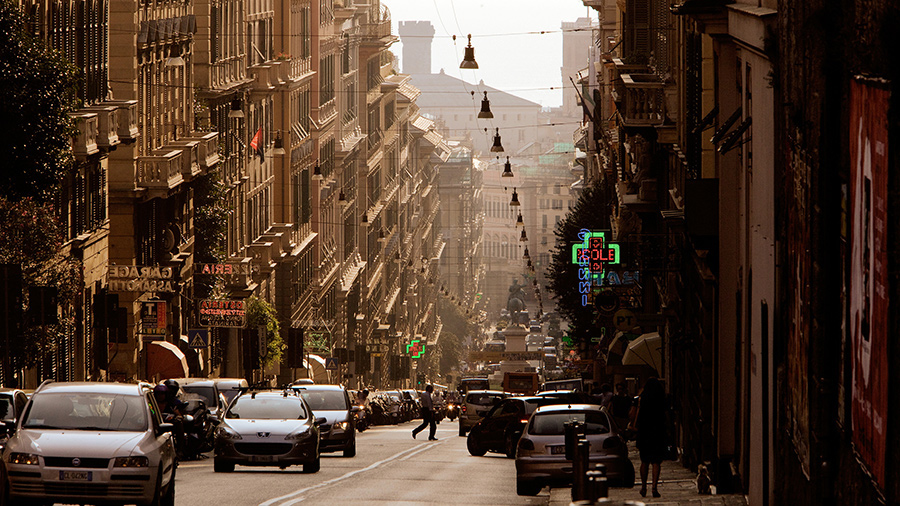 Backed up against the hills, Genoa is a genuine calf-biter (photo: Stefano Goldberg)

According to Cristina, the best olive oil for pesto genovese comes from the hills of Liguria. Time to take a ride with the funicular. Three bright red cable cars, to be found at various locations in Genoa, can take you in a few bumpy minutes to the higher areas and hilltops. From the panoramic terrace of Righi station, Genoa lies literally at your feet. From up here, you look down upon “la Superba” or “the Proud one”, as the port has been known for centuries. The hills are home to olive trees and basil plants… and of the “beautiful women of the hills” from mediaeval times. Back then, Genoese women waited there for their loved ones. Once the long-awaited ships showed themselves on the horizon, the lady folk quickly filled their baskets with basil to spoil the returning seafarers with freshly made pesto. But as legend has it, the souls of the women whose men never returned still circle these hills… 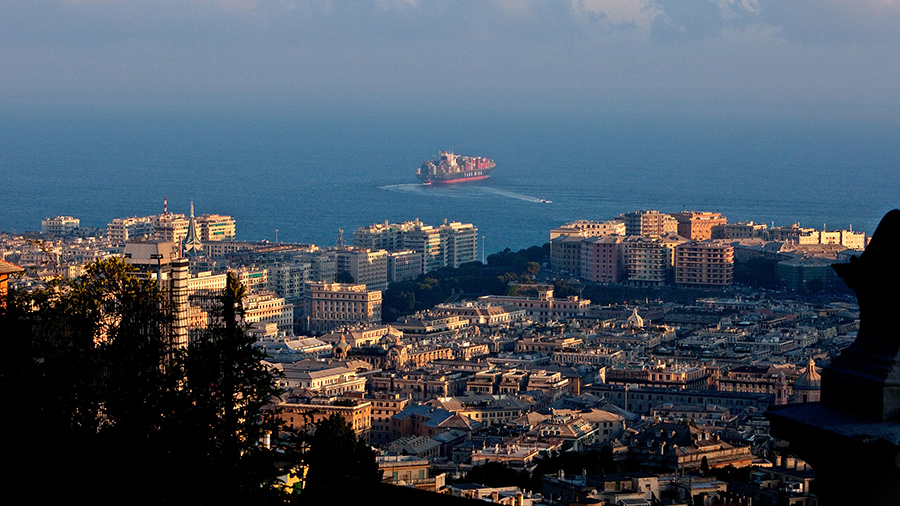 Take the funicular to one of the hilltops and “la Superba” lies at your feet (photo: Stefano Goldberg) 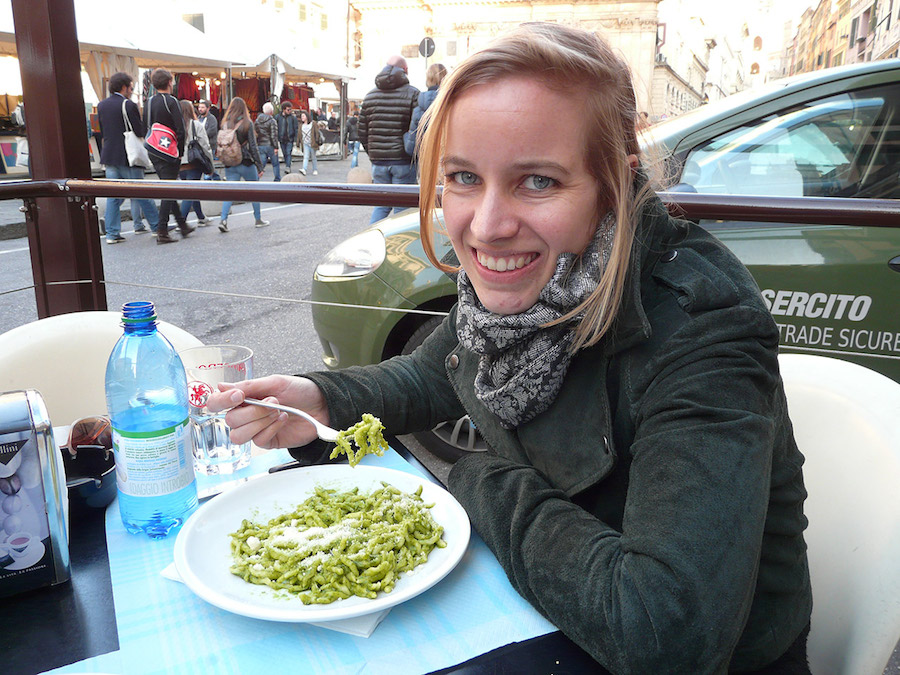 About the blogger: Merel Diemont (1988) studied History & International Affairs and lived previously in South Sudan, Tanzania and Italy. Merel enjoys writing about the cities and regions she gets to know, focusing on the people she meets.

This article was written in cooperation with the School voor Reisjournalistiek

What’s your favourite restaurant in Genoa or your ultimate pesto tip? Let us know in the comments below!