Have you ever seen an aircraft reverse parking at the gate? Probably not, because they usually park with their nose to the gate. But why? There may not be rear-view mirrors on an aircraft, but they can taxi backwards. So why do they face the gate and how do we manage to reverse them out safely?

Lack of space and aviobridges

Back in the days when it wasn’t so busy and there was plenty of space at Schiphol, we used to park the aircraft out in the open field. That meant the aircraft could just taxi forward when it was time to take off. Aircraft were also parallel parked alongside terminals. Passengers arriving at Schiphol then descended the stairs and crossed the apron to the gate in wind and weather, while departing passengers went in the opposite direction.

The first aviobridge was taken into service at Schiphol in 1961. An aviobridge is one of those flexible, trunk-like tunnels that passengers pass through on their way to and from an aircraft. If aircraft park parallel to the terminal, the aviobridge would have to extend further than the aircraft’s wing. That’s why aircraft park with their nose to the bridge, making the distance from gate to door relatively short. This also means the aircraft can stand relatively close together, thereby saving a lot of space. 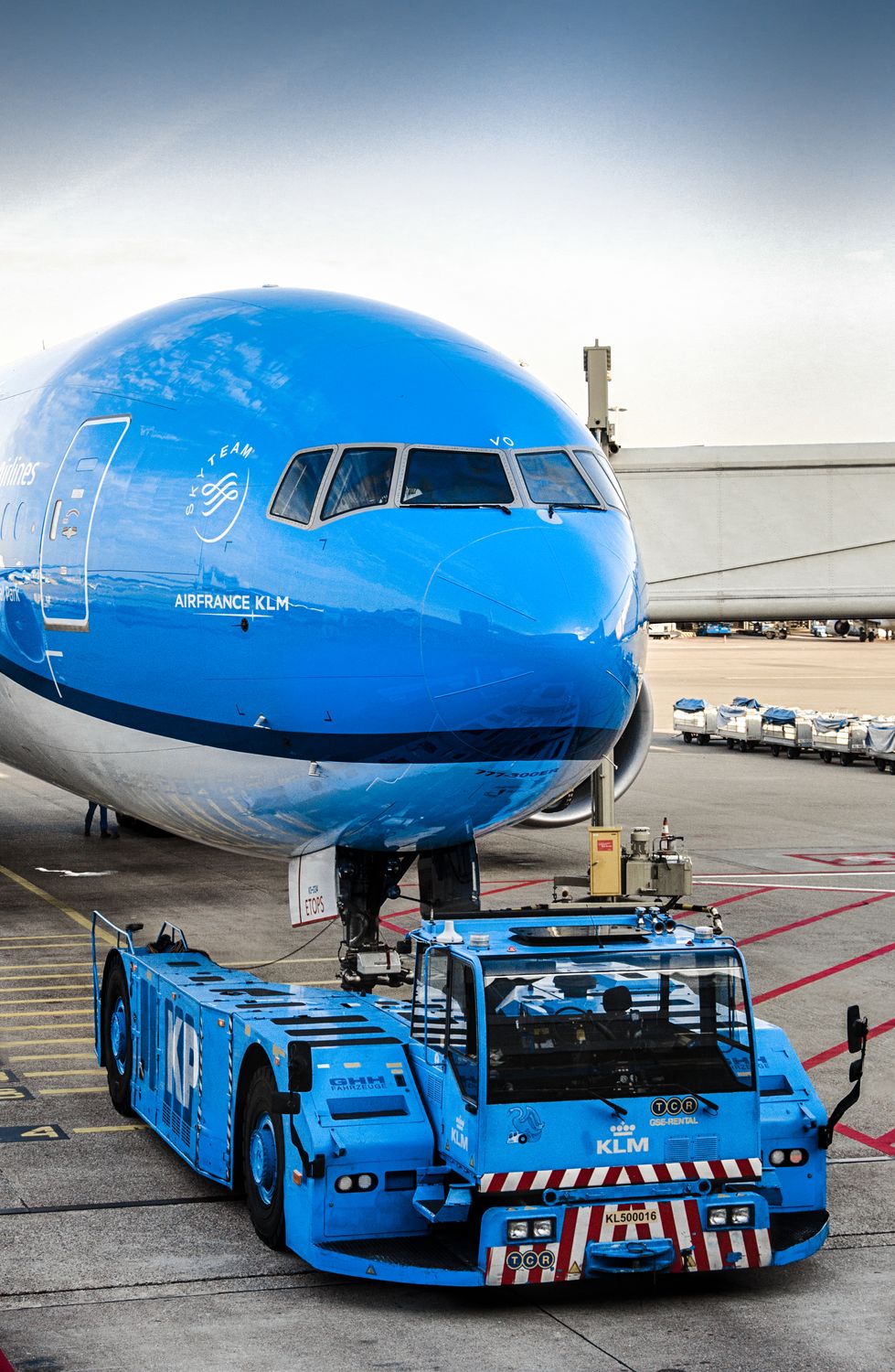 So why don’t they connect the aviobridge to the rear door of the plane?
This is where the jet blast is a problem. It blows out of the back of the engines like a heavy storm, presenting danger for people and vehicles moving around in the vicinity. Even buildings may be damaged. That means it isn’t handy having the aircraft parked with its tail to the gate. The only drawback is that we have to push back the plane to the spot where it can taxi off without causing damage with its jet blast. This process of reversing the aircraft is aptly called pushback. 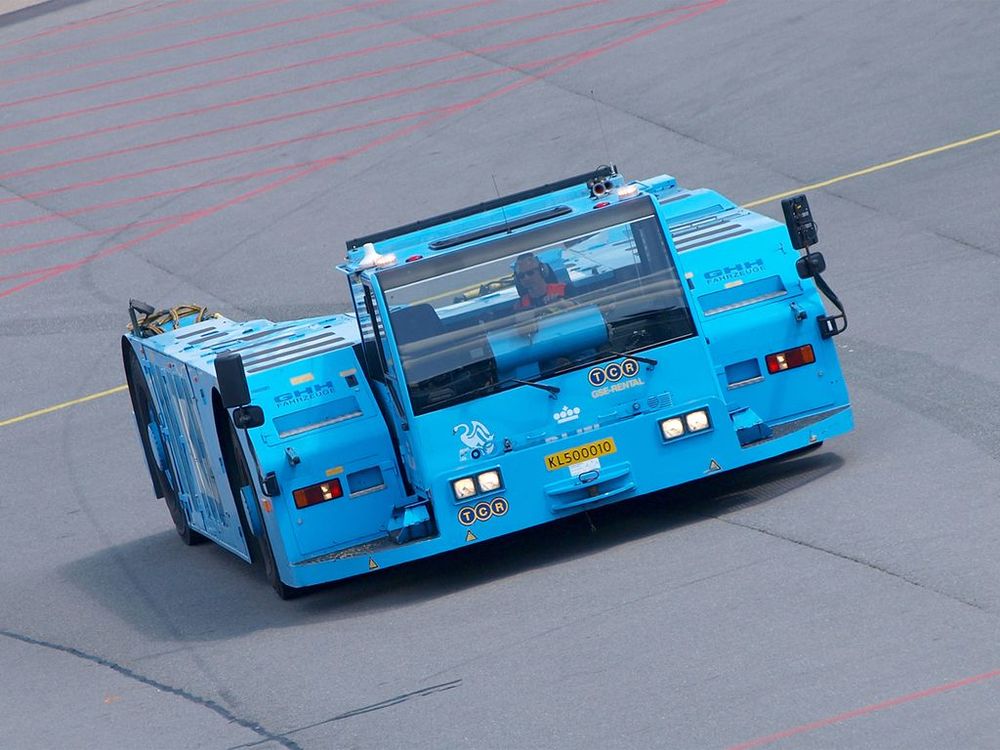 Turning an aircraft around safely
KLM has 50 pushback vehicles in different shapes and sizes. Their type varies depending on the type and weight of the aircraft. Most of these vehicles do not use a tow bar. The vehicle has two arms that embrace the nose wheel. The driver reverses with open arms, which then clamp the nose wheel, lifts it slightly and places a steel plate under the wheel. The vehicle can now manoeuvre the aircraft out onto the taxiway, where it removes the steel plate, opens its arms and then drives off. The aircraft can then taxi off without the jet blast causing any damage. 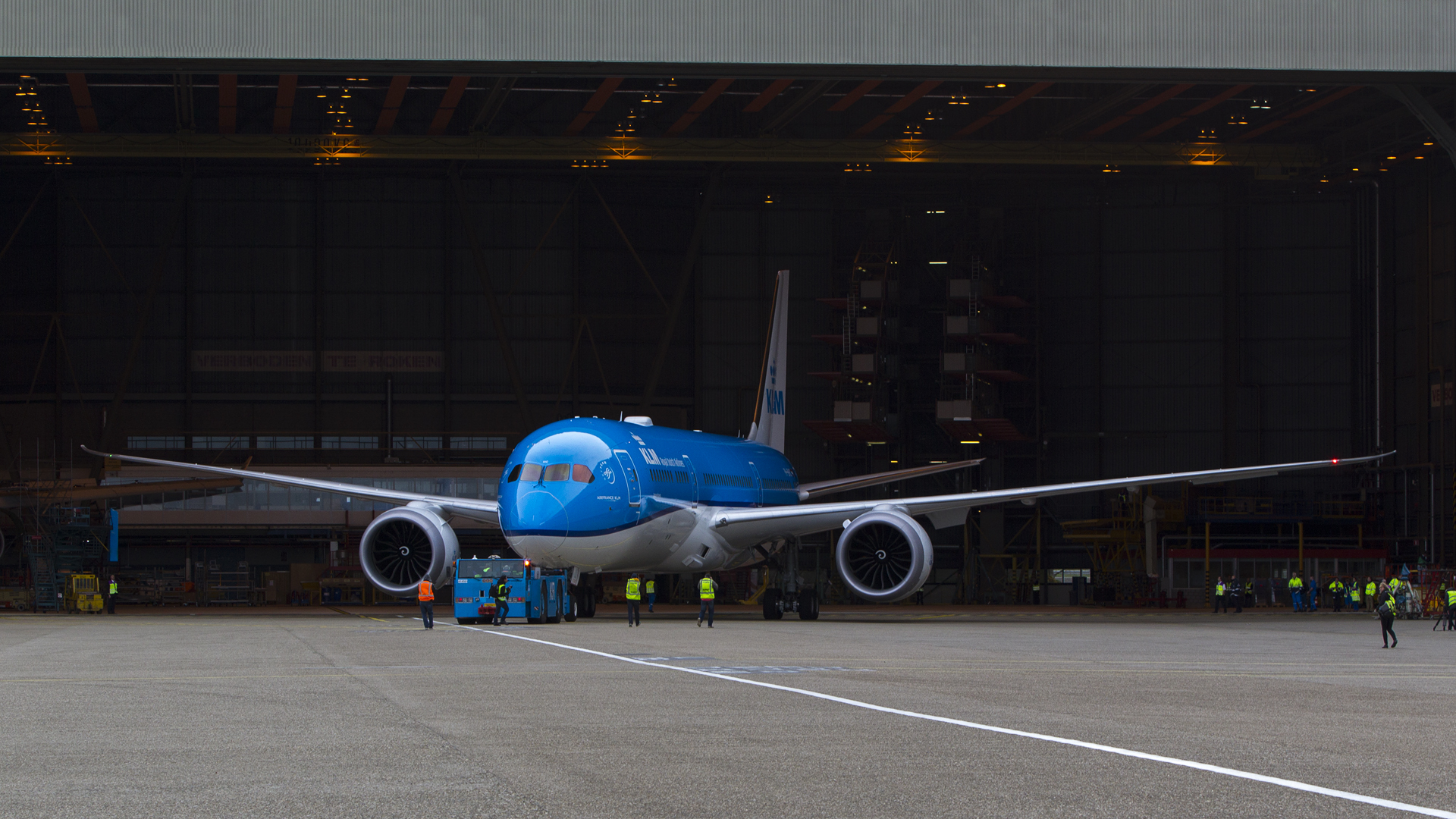 Big boys
A pushback truck looks really small when you see it under a plane, but don’t be fooled. The biggest type KLM uses is more than nine metres long, four metres wide and two metres high. It packs 440kW of power, which is around 600 horsepower. It can lift no less than 50 tonnes, which is necessary to lift the nose wheel off the ground so that the aircraft can be manoeuvred. Fortunately, the vehicle doesn’t have to lift an entire aircraft, because our smallest aircraft, the Embraer E175, weighs 37,500 kg, whereas the gigantic Airbus A380 can weigh up to 575,000 kg! 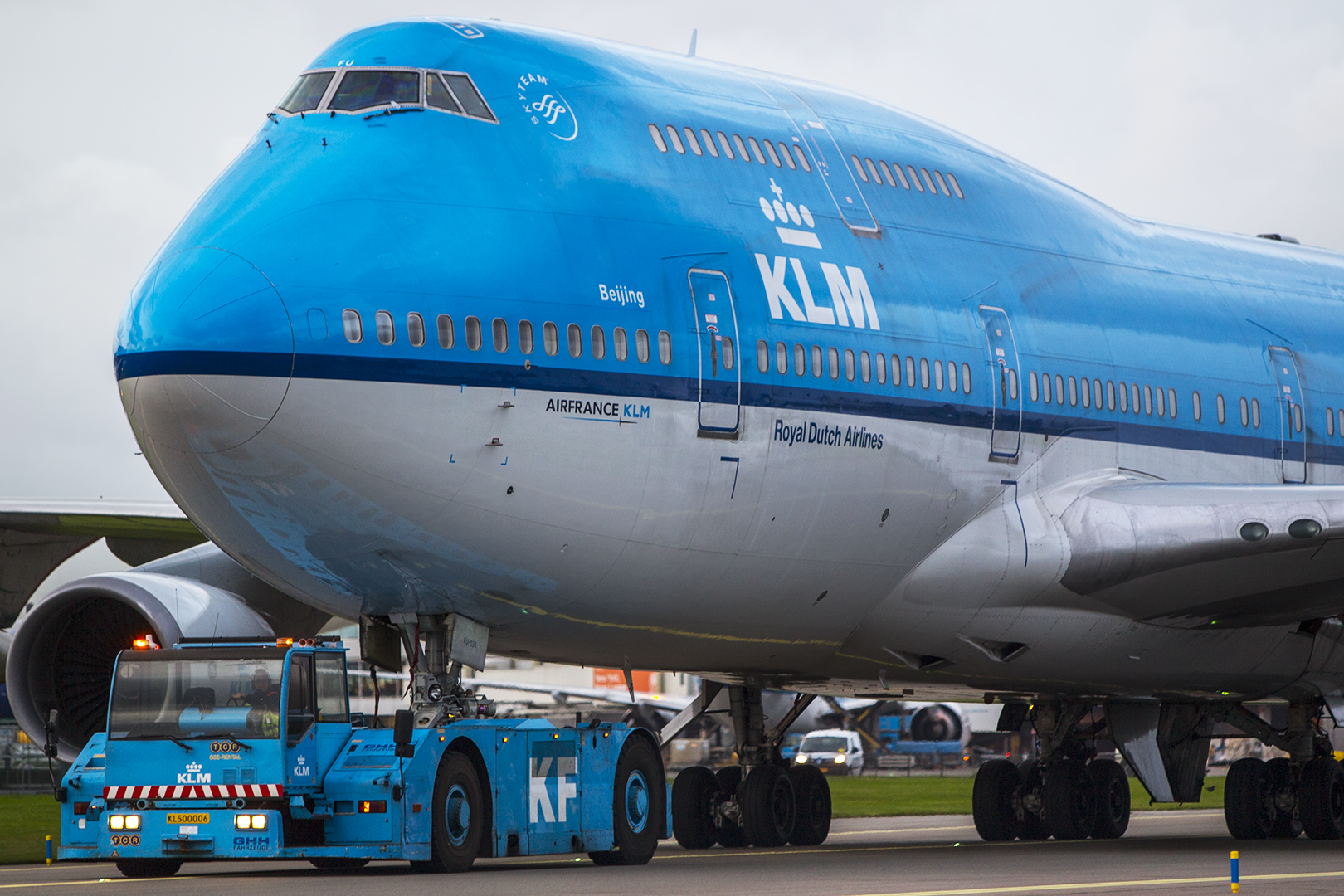 Handy features
The pushback trucks have all sorts of handy features. Some types have a cabin that can be elevated or lowered. The higher the driver sits, the better his view of the nose wheel. The driver uses buttons on the dashboard to indicate what type of aircraft is being handled. This ensures that there are no collisions between the cabin of the pushback vehicle and the aircraft.

There’s also a window in the roof of truck’s cabin, allowing the driver to see at what angle the aircraft is to the truck. The driver’s seat can also be turned 180 degrees, so that the driver can always look straight ahead.

Thanks to these big boys, planes can reverse and no damage is caused by the jet blast.

Do you want to see how a pushback exactly goes? Find out here!