On Sunday, around 1,100 sporty KLM employees and their families and friends donned blue KLM shirts and ran the 10 English Mile from Amsterdam to Zaandam in the Dam tot Damloop. I was there too, watching them run. And sweat. And cry a bit, rethinking their life choices. Just kidding, all I saw was happy faces throughout this cool event!

This is the biggest running event in the Netherlands. Since it began in 1985, with 4,300 runners, the Dam tot Damloop has grown quite a bit. This year around 50,000 runners, 1,300 volunteers, and 150,000 spectators took to the streets for the 33rd edition. Runners, cyclists and walkers gave their all in different races.

This is the 14th time KLM has joined the Recreational Business Run and once again we had the highest number of teams from a single company. 117 blue teams ran the 10 mile race, with great team names like KLM Fit, Fat and Elderly; N G NEAR ING; and the 10 Miles High Club. The itinerary? Departure was at 10:00 hrs UTC (uhh so 12 pm local time) from Amsterdam Central Station. Destination: Zaandam town centre, 16.09 kilometres away. The estimated time of arrival depended on the runner. I’m afraid a few experienced a bit of turbulence, or unfortunate leaks on the way. ;) See the video at the end to get a taste of this day! 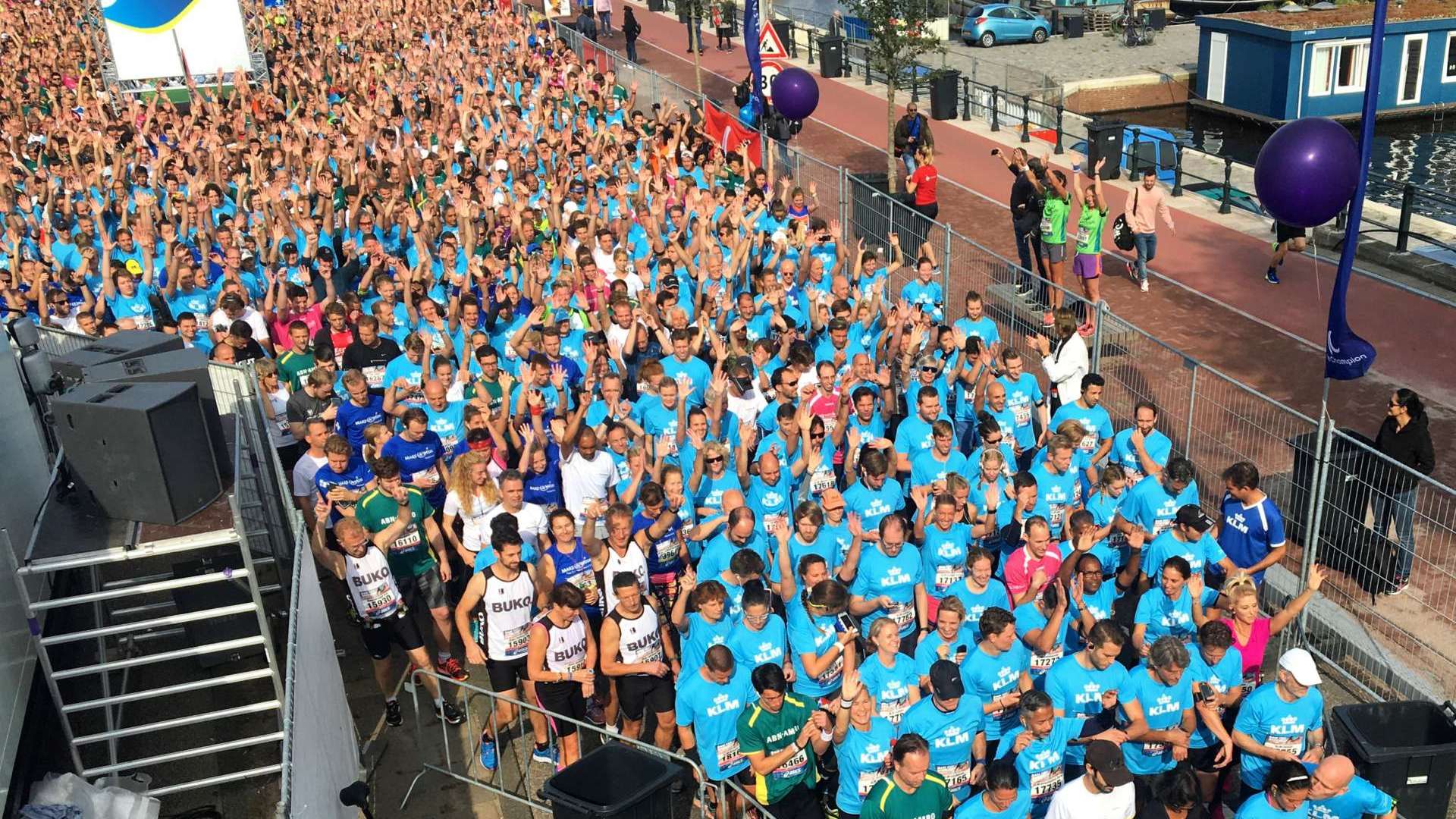 The starting shot was fired at 12:00 hrs sharp. Loes, the junior ambassador for the Make-a-Wish Nederland Foundation (the charity KLM ran for this year) did the honours. I stood pretty close to the start on the scaffolding and, no, I totally didn’t scream and almost drop my phone on the road 5 metres below. Nooope. As I was super inspired by all those sporty people, I did a bit of exercise myself: I waved, I jumped and I shouted for all of the 1,100 KLM runners as they passed beneath me, among them some good friends and awesome colleagues. I felt so proud. And very relieved I didn’t have to run. Yes. Did I mention that I don’t like running? I prefer bikes. Or planes. 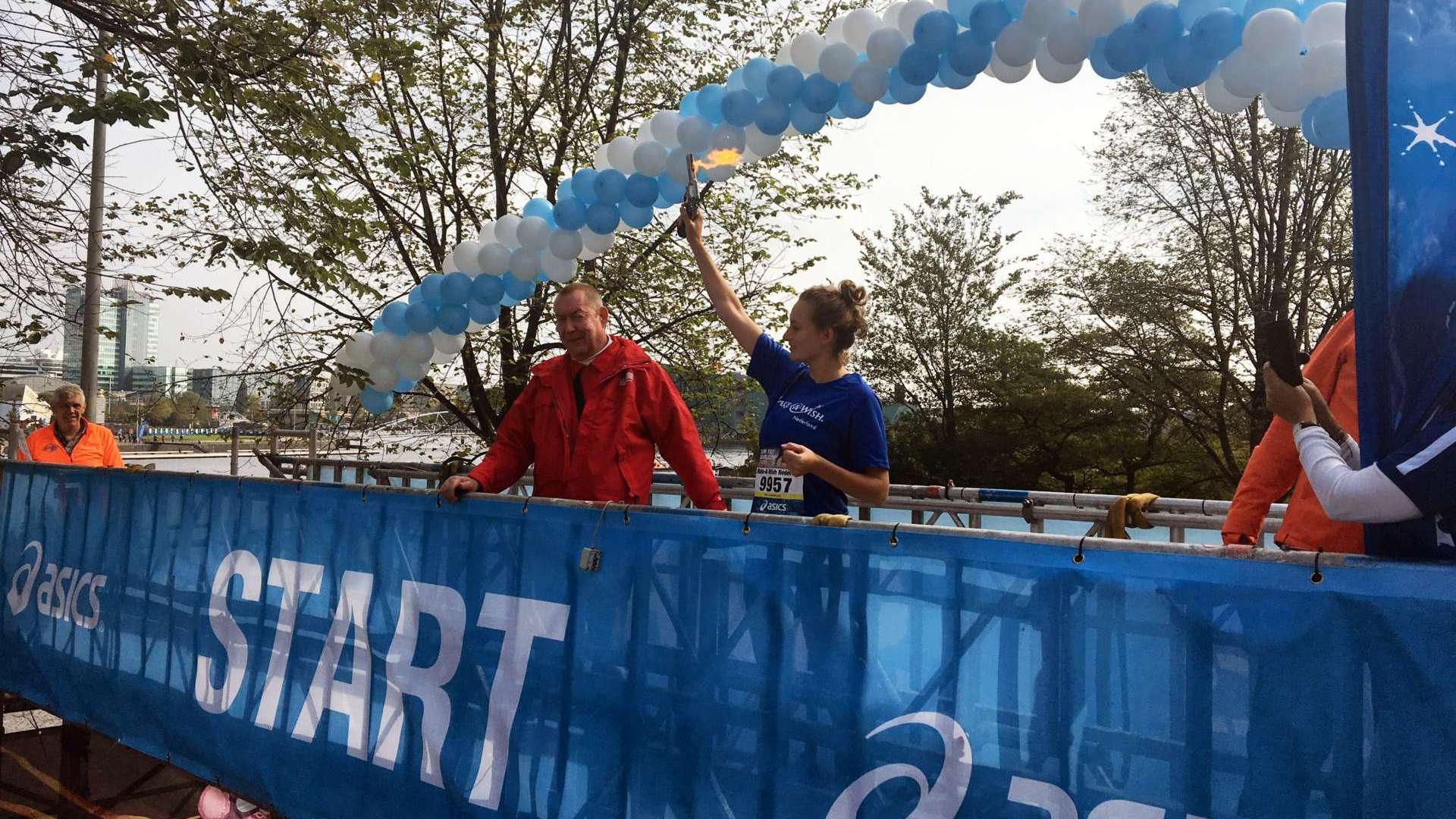 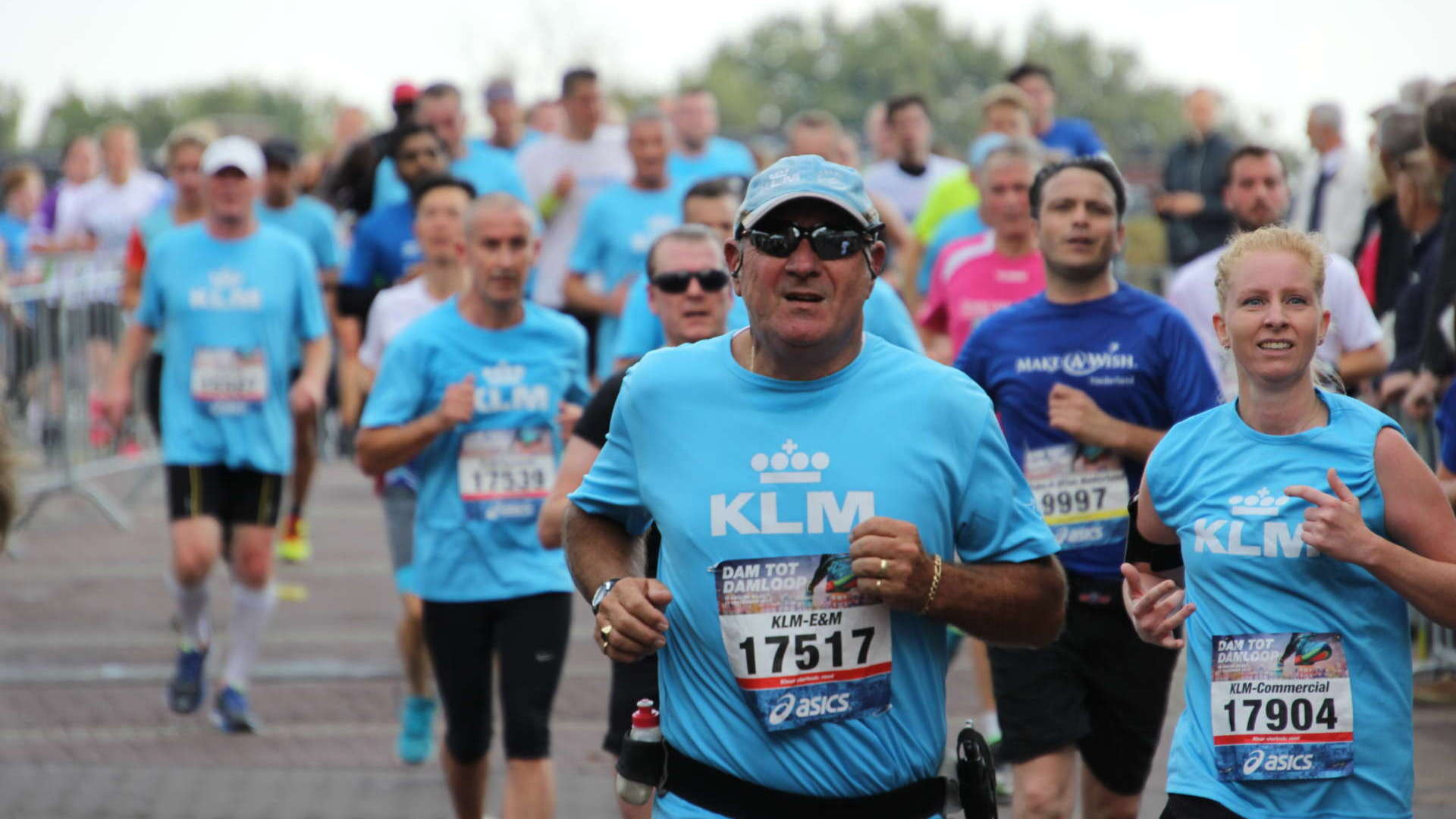 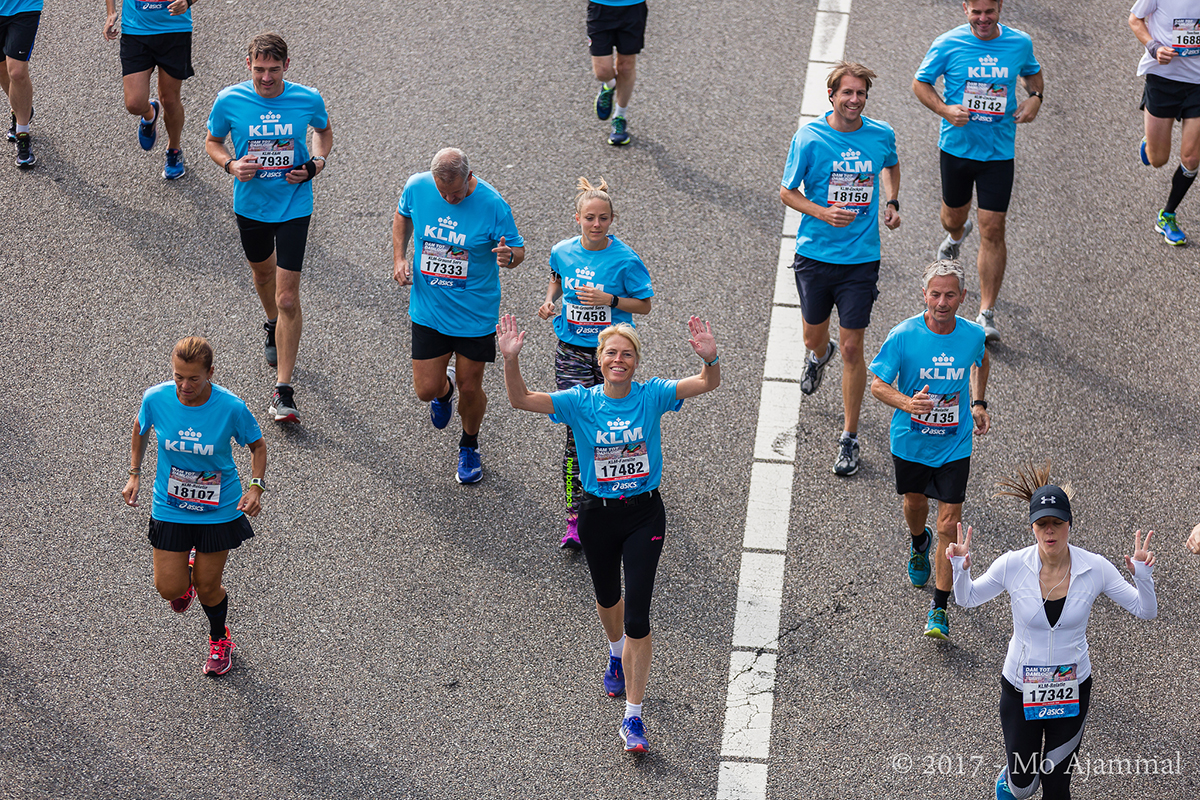 The Myth, the Man, the Legend

Before the start, I met up with the man who came up with the brilliant idea to get KLM to join this awesome event, Koen Hesseling. Back in 2003, he wondered why a large company like KLM didn’t join the run. So he wrote a plan and arranged for 57 teams, 519 people, to run for KLM in the 2004 edition. Within six years this number grew to 117 teams and has remained at that level ever since. It was fun walking around the start area with Koen. Because he is the organiser, loads of people high fived Koen or said hello. We even met a man who had flown back from Japan the day before, just so he could run! What was also really nice was that 20 of the KLM runners were taking part for the 14th – they have been part of every single KLM Dam tot Damloop contingent. Impressive! 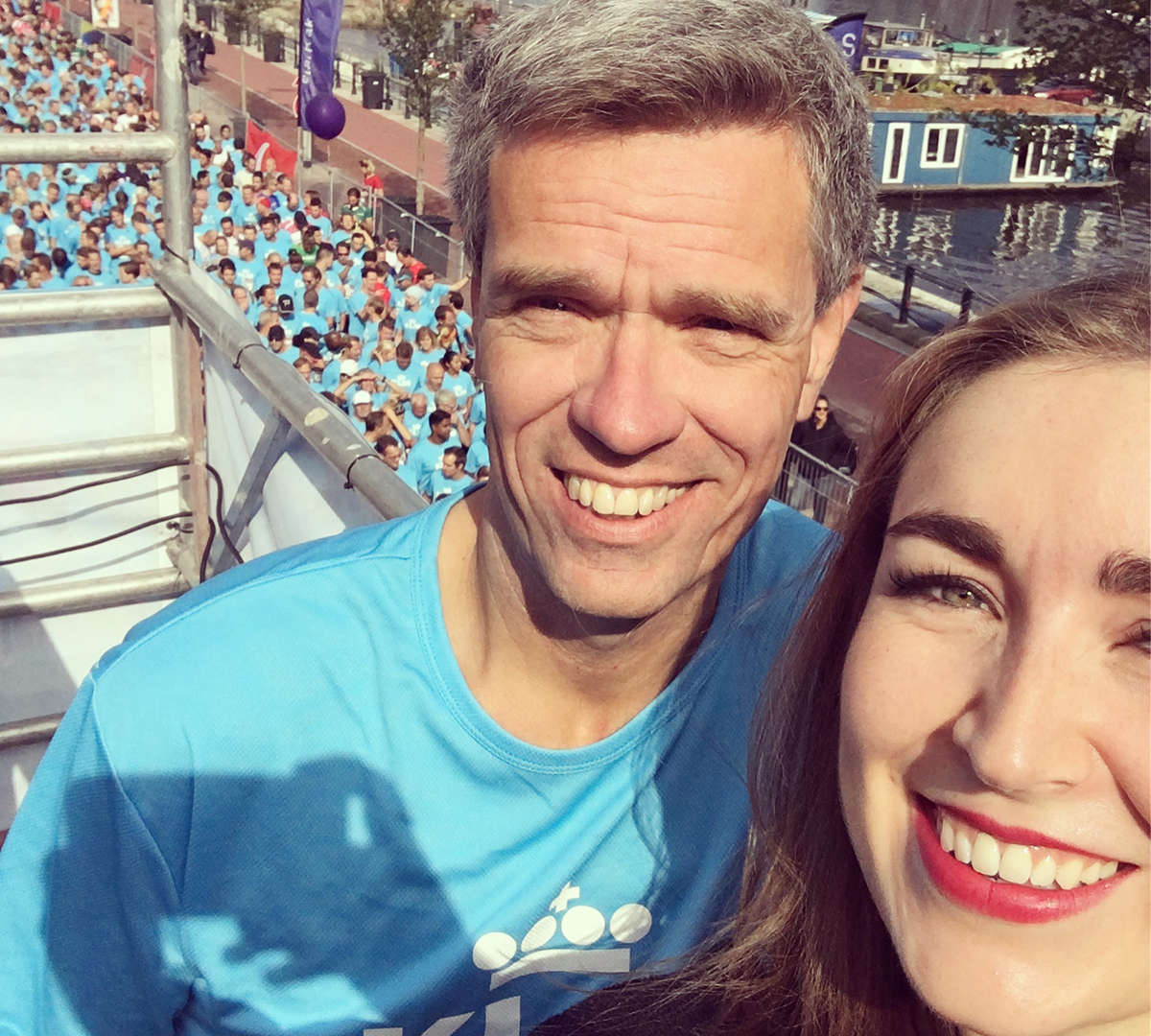 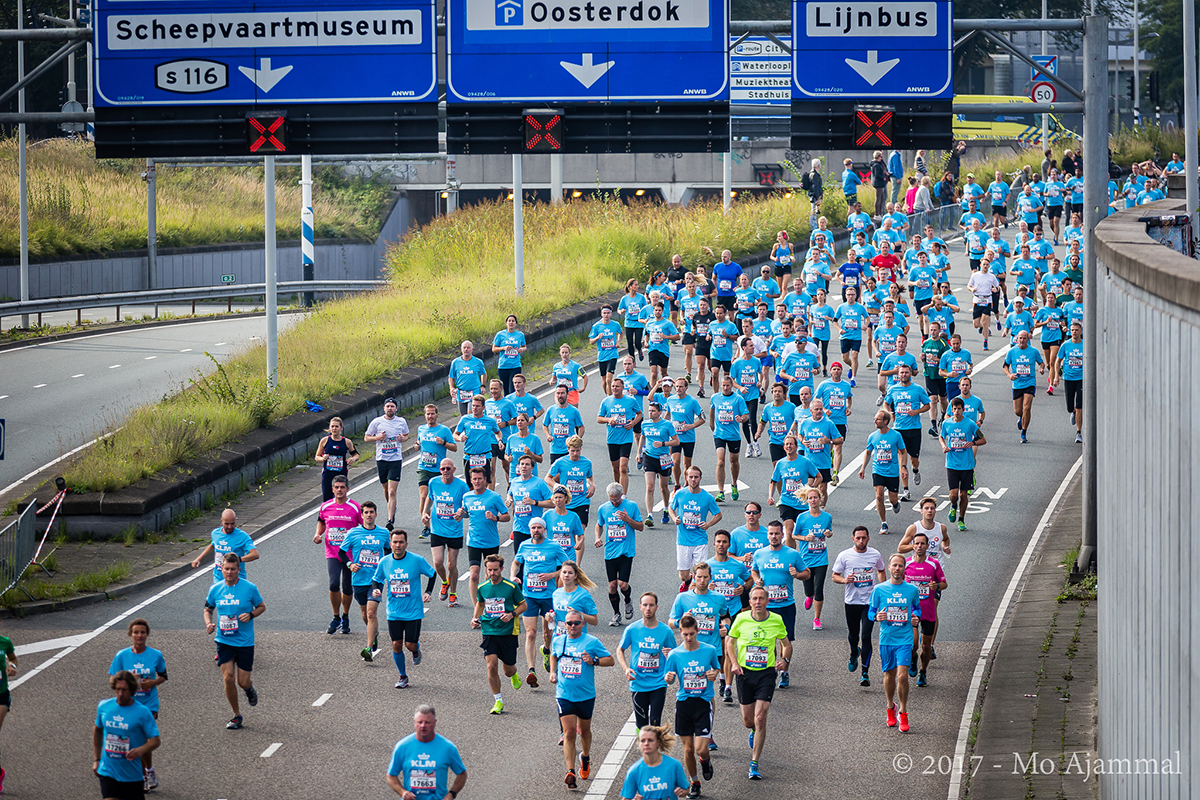 Every year KLM raises money for charity with the run. This year the charity was the Make-A-Wish Nederland Foundation, a non-profit organisation that arranges for amazing wishes to come true for children with life-threatening medical conditions. This year KLM runners raised EUR 11,995, which was handed over as a voucher to Make-A-Wish ambassador, Loes. Koen told me that KLM’s Dam tot Dam runs have raised EUR 185,000 since 2004 for all sorts of deserving causes. Fantastic!

Back to the race. Koen and I were on the scaffolding above the start. After the starting shot rang out, he hurried down to join in his 21st race. Respect. After I had waved him off, I took some more snaps then went back to Central Station to find the shuttle bus to Zaandam. The runners were faster than I was. Both Amsterdam and Zaandam were bustling with people, which meant traffic was slow. So that’s how I completely missed all my friends and colleagues crossing the finish line. Oops! I think my friends ran a bit too fast, anyway. The first of them was over the finish line in 1:12:09. Super fast! 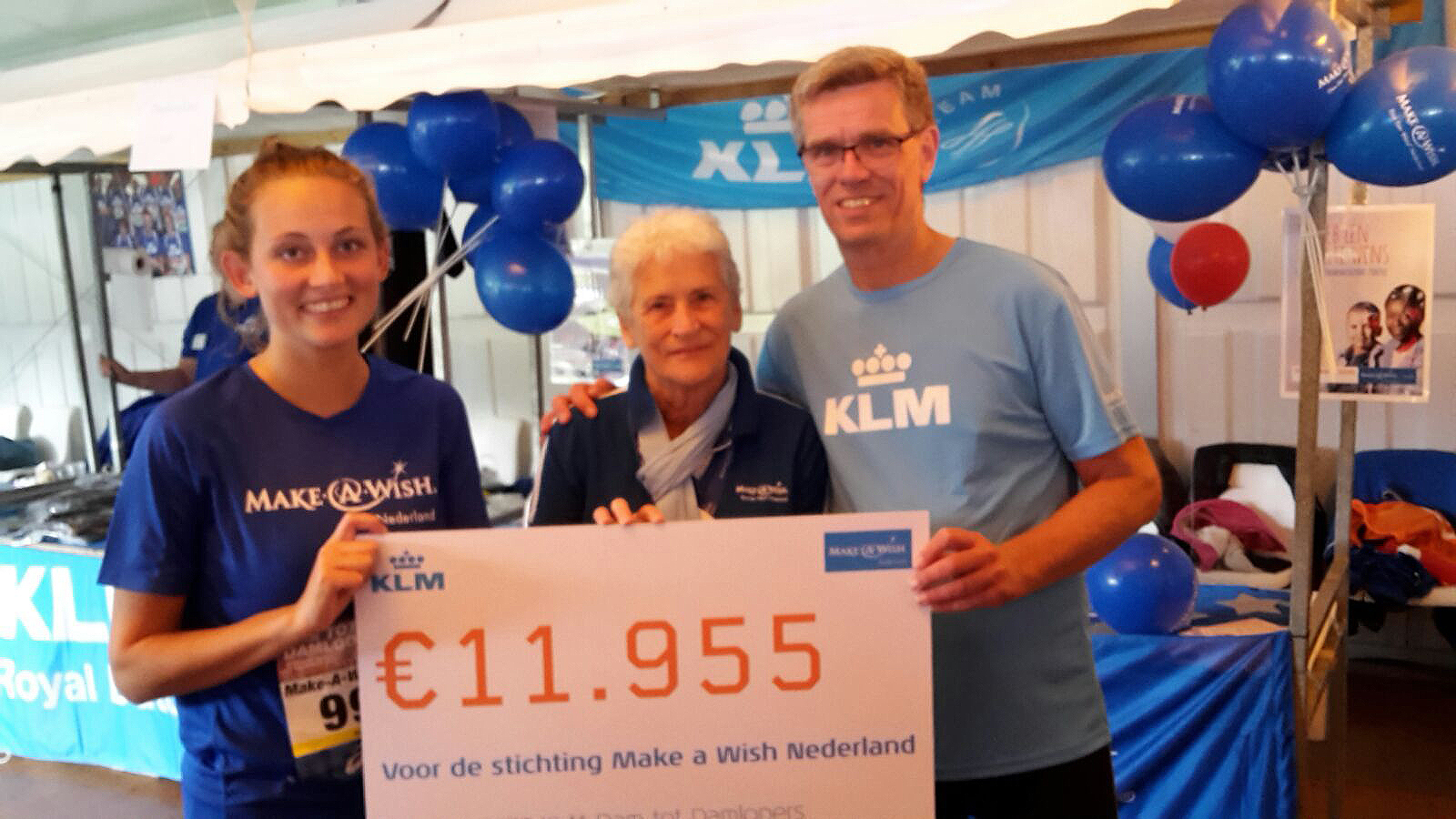 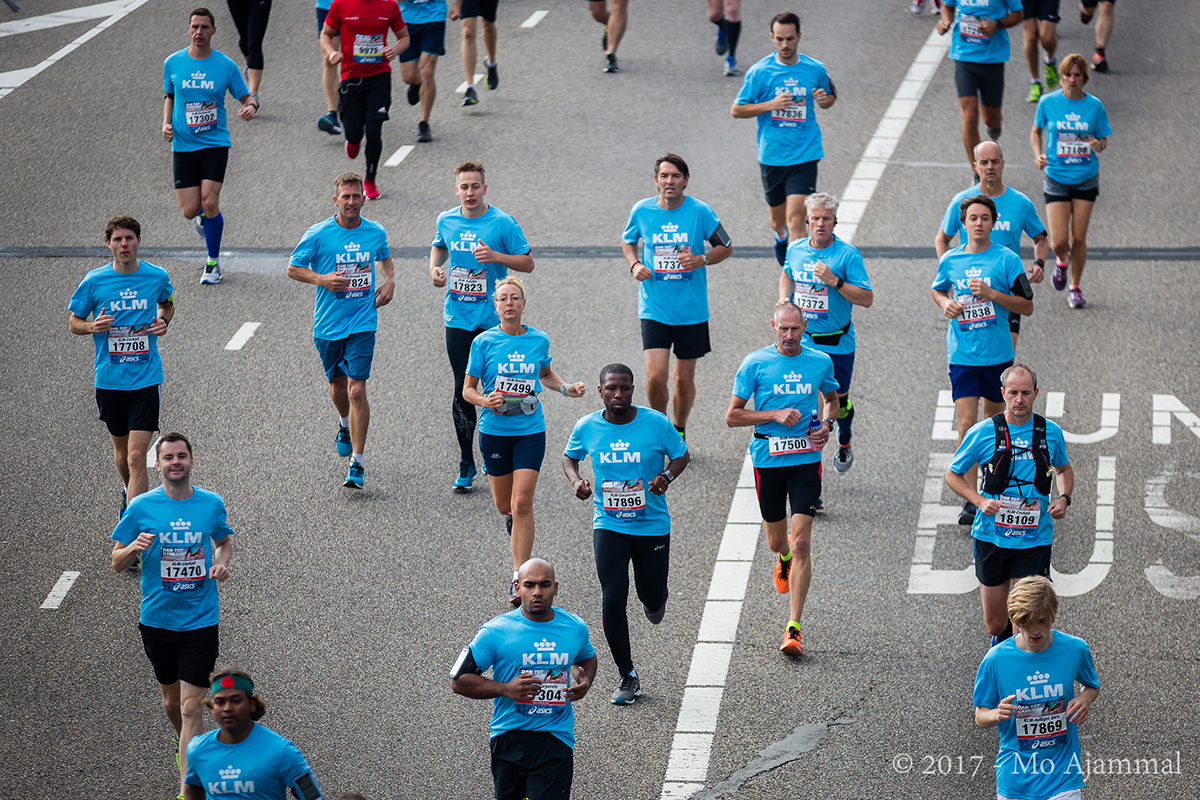 Party time in the KLM Pavilion

I decided to head straight to the KLM pavilion: a big white tent in the Dam tot Dam Park with free food, drinks and massages. The runners could swap experiences with colleagues, friends and family. In the days leading up to the race, 22 volunteers filled 1,250 KLM bags for the runners with fun stuff like a KLM Dopper water bottle, drinks, snacks, goodies, running magazines, and, of course, the blue KLM shirt and start number. At the KLM Pavilion the volunteers also made sure that everyone had a good time.

Everyone I spoke to was content with their time, or simply glad they had made it at all. “I beat my personal best by three seconds!” I saw a lot of happy, sweaty faces, all of them with a shiny, well-earned medals around their necks. I have to admit, I did begin to feel a bit lazy at this point. :) 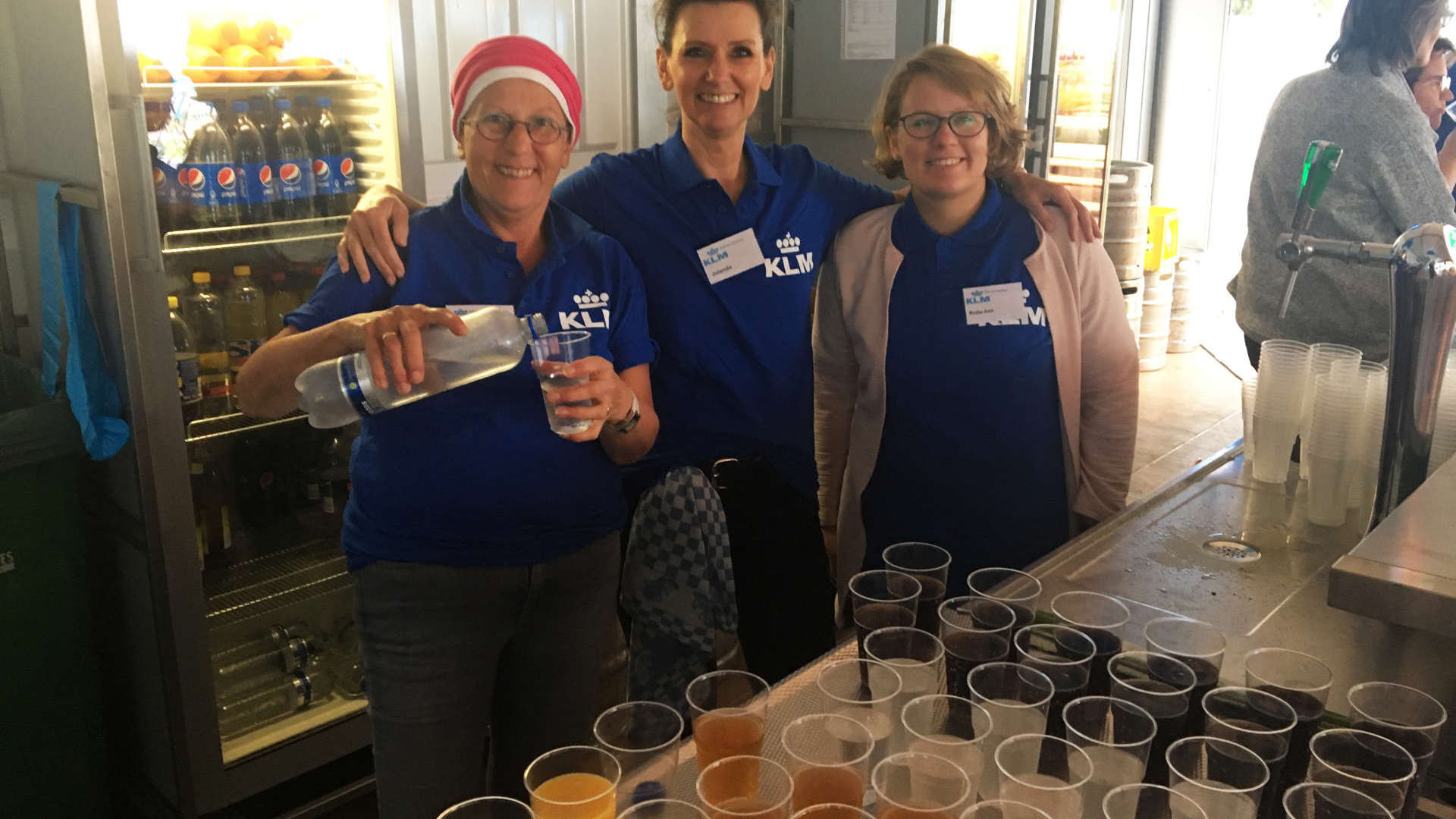 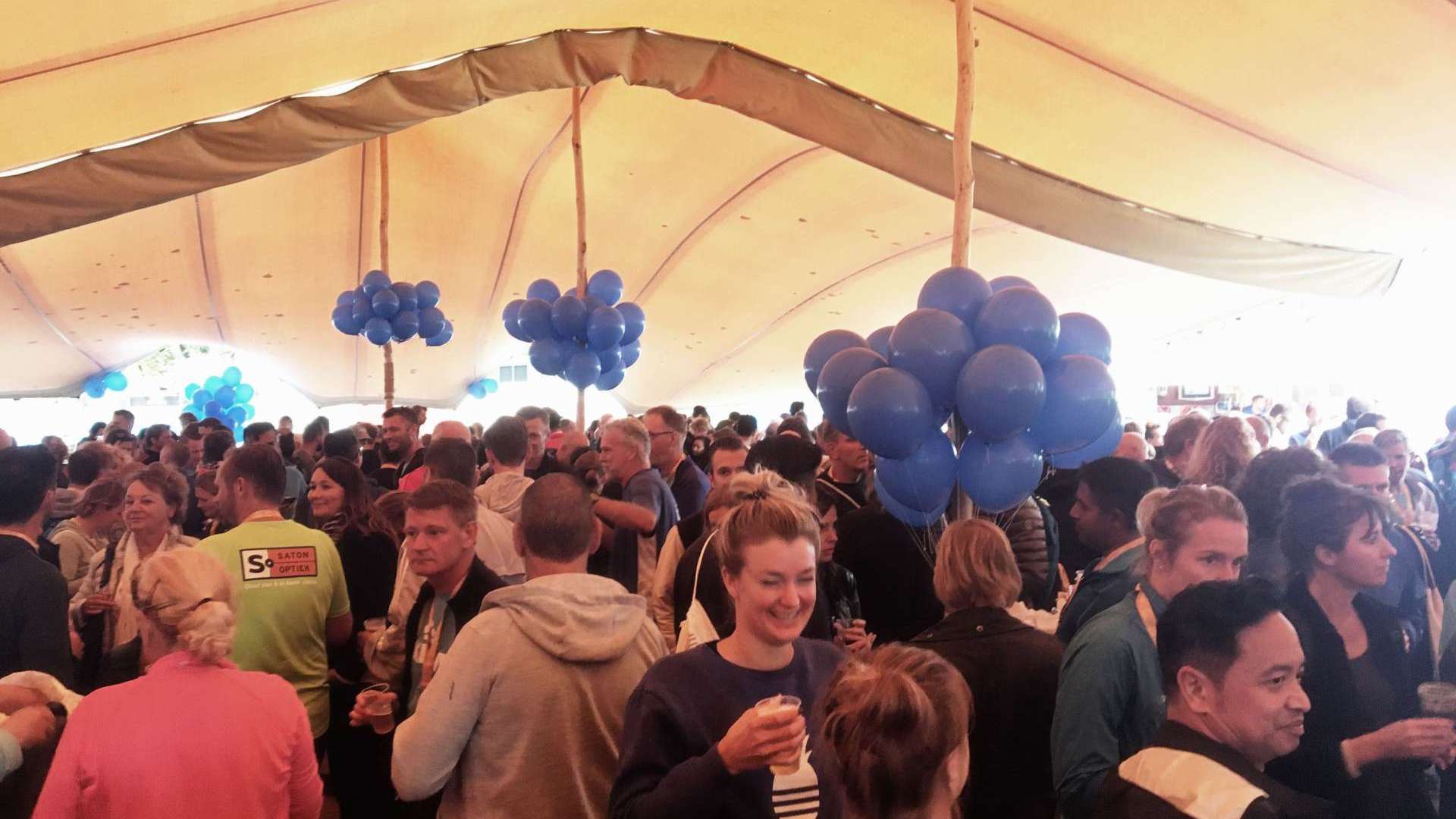 Koen was also very happy with the event. “The atmosphere was fantastic! KLM was very prominent in today’s race and the many volunteers helped to make it a great day. Even the weather was nice, despite the rainy forecasts!” I agree with Koen, it was a great day. After a few drinks and a ‘broodje kroket’ (a croquette roll on a bun), I went home. I have to say, I almost felt like running my own race, after seeing all those sporty, excited people. Perhaps I’ll be KLM’s running flying reporter next year and go the whole 10 miles? Ha. Hahaha. I must not tell lies. ;)