This is my second visit to the Philippines. Last time, I took a look at the country’s ingenious modes of transport, ranging from brightly decorated jeepneys and horse-drawn carts to an endless variety of engine-driven rickshaws. This time I’d like to take a closer look at the language of the Philippines, guided by Liarnie, who kindly responded when I called on readers to post their favourite sight, sound, scent and taste in their home town or country.

Before I attempt to decipher her preferences, I’d like to defuse the vicious rumours that I cheat when playing this game. I only resort to Google Translate once I have exhausted all other options to work out what the hell people are saying. And even then GT coughs up absurd and meaningless phrases like “Of sleep and six.”

Because none of the Filipino words below ring any bells – except perhaps “bato” and “batanes”, which may refer to “boat(s)” – I’ll apply the method I used for Mandarin. This involves submitting words or phrases to Google Images, a method reminiscent of our earliest reading experiences, when we are presented with word-picture pairs. The main difference being that nowadays the word “apple” mainly generates many millions of pictures of high-tech gadgets.

And so, without further ado, I now invite you to tag along as I tackle Tagalog. (Always use your weakest joke as the title)

Sight: “Mga bahay na bato sa Batanes” – My first guess was wrong: “Bato” and “Batanes” have nothing to do with boats. A “bahay na bato” is a stone house dating from colonial times, and “Batanes” is the most northern province of the Philippines. When I submitted “mga” to Google, I got thousands of photos of classic MG sports cars. So perhaps Liarnie is referring to this “old stone house in Batanes”. 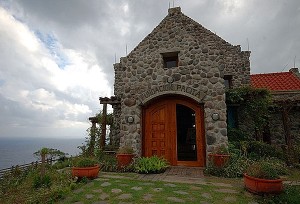 Sound: “Paghampas ng alon sa dalampasigan” – The word “pag(ha)hampas” seems to be a reference to a religious procession celebrating Easter. And could “dalampasigan” mean beach? Could Liarnie be referring to the procession of waves breaking on the beach?

Scent: “Halimuyak ng Sampaguita” – The “sampaguita” (Jasminum sambac) is the spectacular national flower of the Philippines. The images relating to “halimuyak” were unclear, but I later discovered that it means “scent” or “fragrance”.

Taste: “Ensaymada” – Only after checking the images did I realise that this word closely resembles the Spanish “empanada”, which is a savoury pastry. The ensaymada looks equally delicious, but is probably sweet, although I also saw some topped with what looked like grated cheese.

My previous blog attracted some intriguing comments about the history, culture, cuisine and language of Romania. I challenge Filipino readers to tell us even more about their own country. Perhaps you can start by explaining what Liarnie do’s and don’ts mean:

(Thanks to Liarnie for showing us around. You can visit her website. You can see more of Oggie Ramos’ fabulous photos here. And if you really have nothing better to do, you can see my photo-blog of the Philippines.