In this week’s blog, I’d like to take you more than seventy years back in time to the days before the Second World War when it was common for Dutch families living in the Dutch East Indies to send their children to the Netherlands to be brought up in the ‘proper Dutch manner’. But as the impending war threatened the Netherlands, many families wanted their children with them in Asia, where it was still relatively peaceful.

This demand to reunite families caused a run on tickets for passenger liners bound for the East. Some went by plane, although this was at least three times the price of a boat trip. To try to resolve this, KLM operated several ‘children’s flights’, reuniting many dozens of children with their parents in the Dutch East Indies shortly before air traffic above Europe was brought to a standstill.

After the Germans invaded Poland, flights through German airspace were immediately forbidden. In order to keep the Schiphol-Batavia service operational, Naples was chosen as the point of departure for the flight and a train link was set up to get passengers there. 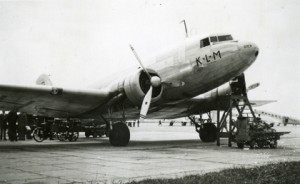 ‘The Children’s Aircraft’
The Children’s Aircraft named ‘Gier’ that left yesterday from Naples is carrying six children for Medan (two children of the Thiele family, two of the Fürrer family, one of the Van Rossum family and one of the De Kok family). It is also carrying one Chinese child named Ie Keng Djien for Batavia, one child for Toeloeng-Boejoet (South Sumatra) of the Ruyter family, one of the Van der Beek family in Poerwakarta and two for the Van de Steenoven family in Malang. A total of 11 children.

Along with their blue suitcases – provided especially by KLM for the flight – Hans and his sister Anke van de Steenoven left Naples airport on board the KLM DC-3. 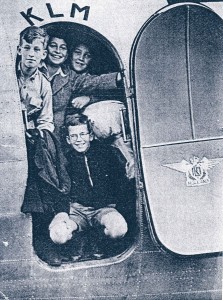 Hans, 10 years old at the time, kept a diary during the flight: “Soon there was little more to see besides water, as we headed off for Alexandria with a stopover in Athens. The clouds prevented us from seeing the Vesuvius and Stromboli volcanoes. That was a pity, because I had the best seat in the aircraft – the last one at the window on the left with a clear view under the wing. You don’t get luckier than that on such a flight!”

His travel report will continue in my next blog.