Last week we mentioned in our blog how KLM started on 17 May 1920, with the leased ‘De Havilland DH.16 G-EALU’ (also known as the DH.9A) captained by the British pilot H. ‘Jerry’ Shaw. This week, the sequel to this milestone.

As described in the last part, the first flight was operated with an aircraft and crew hired in from UK-based Air Transport & Travel (AT&T). This marked the start of the trial service between Amsterdam and London, with the first aircraft touching down at Schiphol at 12:45 hours on 17 May. Two journalists were on the flight, carrying a stack of morning newspapers from England and a letter from the Mayor of London addressed to the Mayor of Amsterdam. Not only did this flight carry KLM passengers for the first time, it also carried KLM cargo. 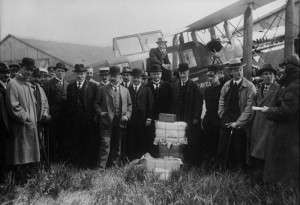 From the airline’s 1920 annual report: “Armed with the approval of its articles of association by Royal Decree dated 30 June 1920, no. 9, the Royal Airlines for the Netherlands and its Colonies commenced operations with commercial aircraft on 17 May 1920, starting with a trial service to England.” The reason why a trial flight was operated in 1920 is explained by the fact that more experience of commercial aircraft and air traffic would have been needed for more intensive operations than were available at the time. The available aircraft were limited to converted fighter planes with which services had been initiated abroad. Until that time, commercial aircraft for transporting people and goods had not been available.

The logbook notes that the flight from Croydon to Schiphol took two hours 15 minutes, and that it flew at an altitude of just 300 feet (90 metres).