After last week’s blog about seating in the F.XII, this week there’s more on aviation in times gone by.

Although KLM was established on 7 October 1919, the airline didn’t operate its first commercial flight for more than seven months. On 17 May 1920, KLM’s leased De Havilland DH.16 G-EALU (also known as the DH.9A) landed at Schiphol airport, captained by the British pilot H. ‘Jerry’ Shaw.

Picture this: it is March 1920. The deed of incorporation has been signed and flight operations can begin. The KLM Board of Management has established contact with UK-based Aircraft Transport & Travel (AT&T) to discuss the company’s experience with air traffic. The option of jointly operating the first service has also been explored. These extensive discussions finally deliver a charter agreement between KLM and AT&T. As a result, KLM procure aircraft and crew to operate what is to become the Maaldrift–London service. At the time, Maaldrift was a small airport near Wassenaar, home to one of the airline’s founders and financiers. 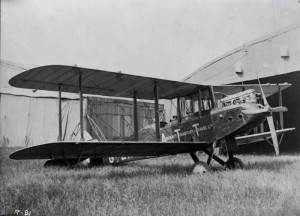 The De Havilland DH.9A was the first aircraft to be leased. The earliest aircraft of this type had taken to the skies as a fighter plane in 1917. The DH.9A was relatively large, with room for a pilot, a co-pilot/bomber, and a gunner. A number of these aircraft were deployed in the early civil aviation industry. Passengers then occupied the bomber’s position. The plane was modified at a later date, converting the gunner’s position into a (more or less) covered area to carry two passengers – this was the DH.9B. There were very few instruments on board the DH.9 and, in the absence of any radio communications, pilots navigated on the basis of what they could see on the ground, mainly finding their way by following railway lines.
When AT&T went bankrupt in 1920, KLM took over four DH.9Bs for civilian use. While they only flew for KLM for a limited time, they were the very first aircraft in KLM’s fleet.