Heathrow Airport was the starting point of the London-to-Christchurch air race in October 1953. KLM took part in the handicap section with its brand-new DC 6A Liftmaster. The “Dr. Ir. M. H. Damme” was a freighter that had been converted into a passenger plane for the race. On board were 64 passengers, plus a double cabin and cockpit crew headed by Captain Kooper.

KLM President Albert Plesman felt it would be a good idea if KLM took part in the race, thereby confirming that safe and rapid transport over long distances was an everyday affair. The aircraft was therefore fully loaded with passengers, cargo and mail, which is why KLM took part in the handicap section of the race.

Specialists came up with an ingenious way of calculating the best balance between costs and capacity. All factors were taken into account. This included the freight and mail, plus the combined weight of the passengers, as well as all other items on board, such as catering materials, the galley itself, seats, curtains, carpets, water tanks, toilets and so on.

This ensured a maximum handicap, which meant that KLM would win the race as long as it arrive within 44 hours of the fast competitor. This may seem like a huge margin, but there was a lot that could go wrong, ranging from engine trouble to heavy weather. And it was going to be a long flight. The other participants in the handicap section were a British European Airways Viscount, which had undergone a cabin conversion to install extra fuel tanks, but had no other freight on board, and a Handley Page Hasting military transport plane entered by the Royal New Zealand Air Force.

The passengers aboard the KLM plane were very diverse. Initially, Plesman had decreed that the flight should be handled like any normal flight, with the proviso that there would be no women on board. In his eyes, a two-day air race, entailing an almost non-stop flight, was an ordeal suitable for men only. After a great deal of criticism in the press, Plesman capitulated and, in the end, almost all the passengers were women emigrating to New Zealand to meet their future husbands. A very enthusiastic and high-spirited group, none of whom had every flown before. Plesman advised them to “take along your knitting and a musical instrument,” and they did just that. And so the adventure began, with 55 emigrants flying one-way, as well as nine invitees, three of whom were journalists, including one radio reporter. The flight would take them via Rome, Bagdad, Karachi, Rangoon, Jakarta, Darwin and Brisbane to Christchurch. 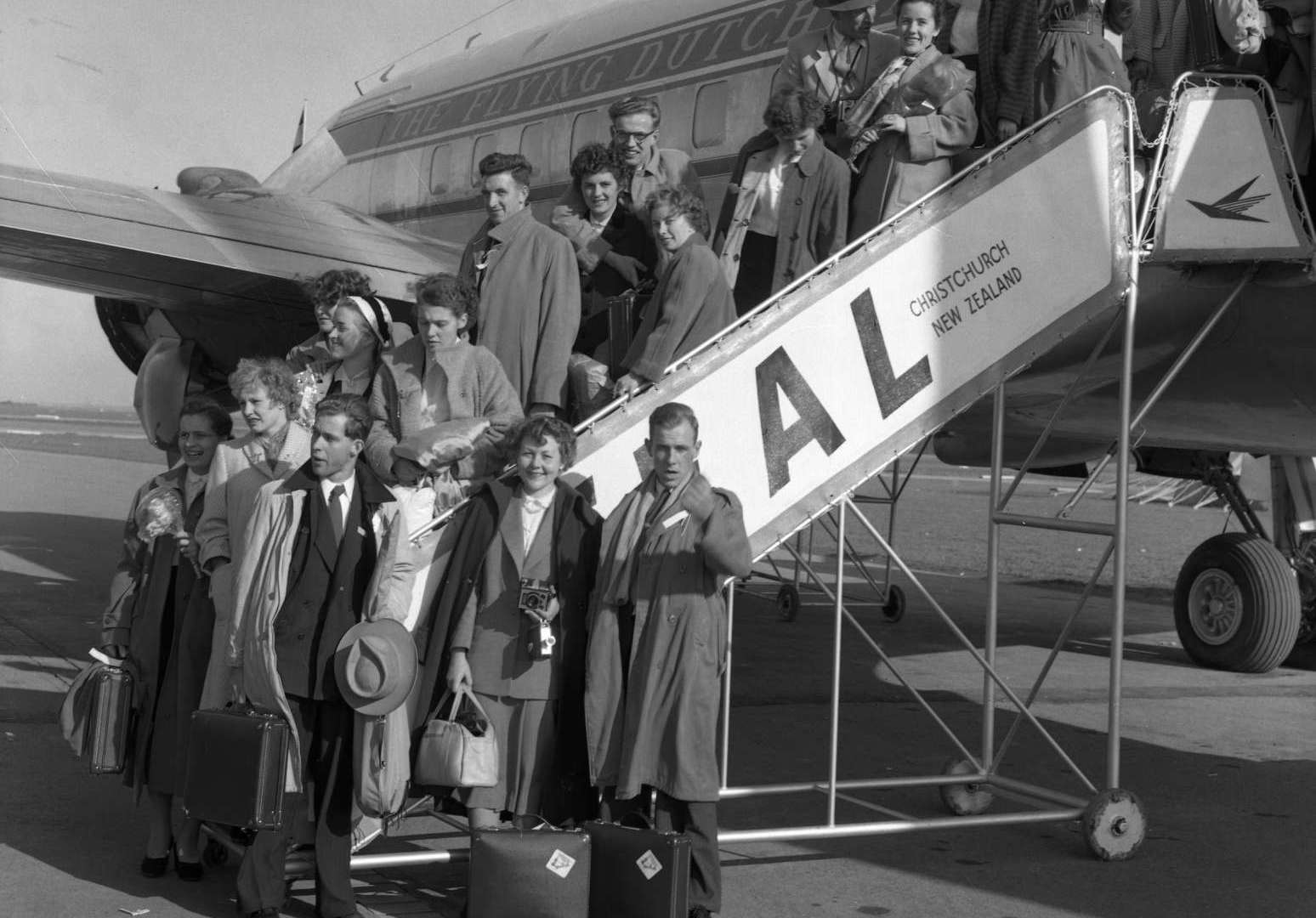 Only one other opponent

On average, every stop lasted only 20 minutes, during which time the aircraft was refuelled and catering was replenished. There was a double cockpit crew on board, and a new cabin crew took over in Karachi. During the stop in Rangoon, passengers were allowed to leave the aircraft for the first time, while locusts seized the opportunity to hitch a ride. Meanwhile, the crew received word that the Royal New Zealand Air Force plane had been forced to leave the race, because it had damaged its flaps during a landing in heavy weather in Colombo, Sri Lanka. This meant that KLM had only one other opponent: the British European Airways Viscount. But the British had zero handicap, which meant KLM was the de facto race winner, as long as the crew managed to avoid any mishaps. 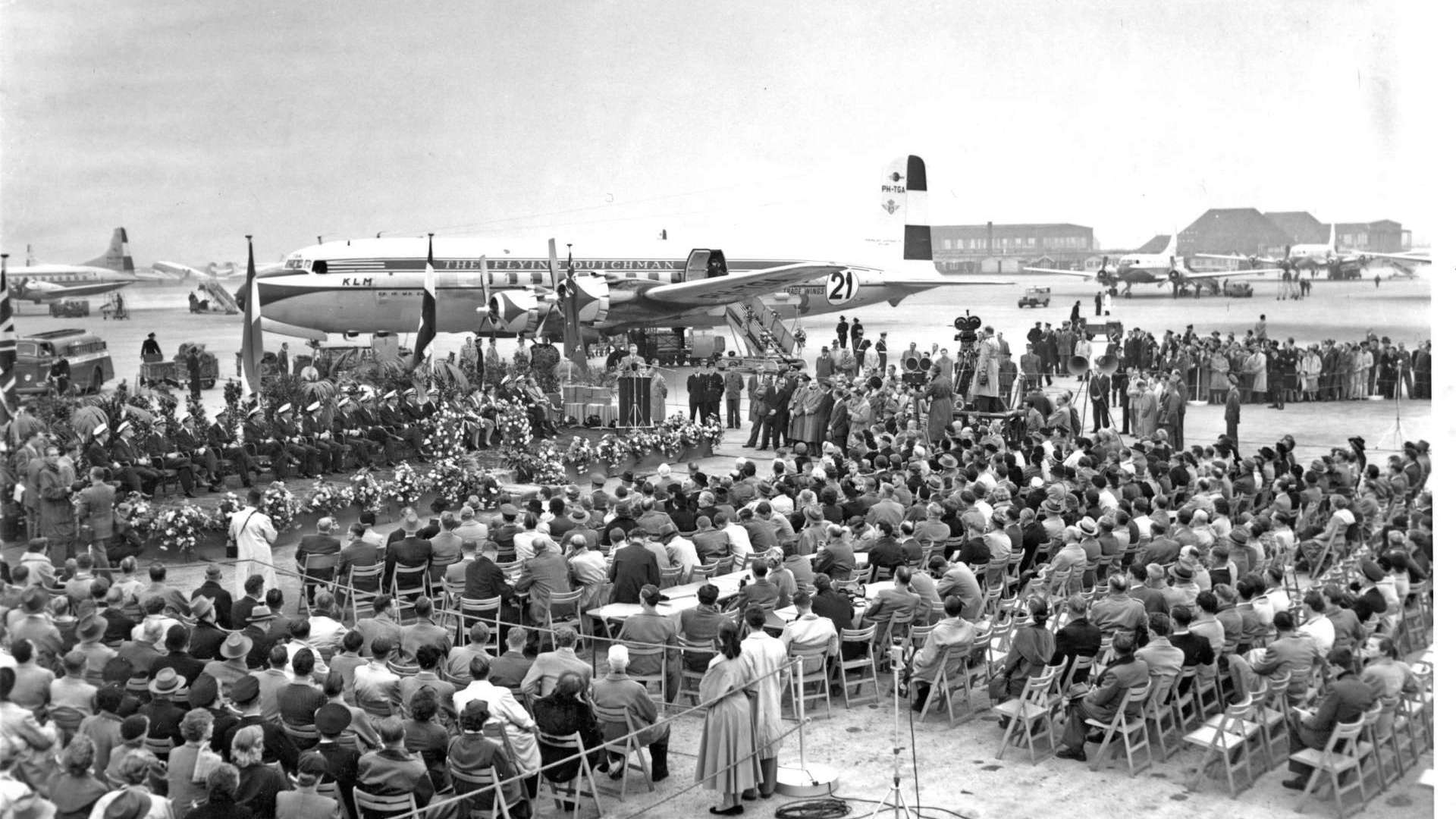 Fortunately, the rest of the race went smoothly, although a large hawk did fly into one of the engines during the landing in Darwin. With every stop, the KLM aircraft drew a bigger crowd. In Brisbane, the last stop before Christchurch, around a thousand immigrants gathered to cheer for the passengers, who were allowed to briefly leave the plane. By then it was clear that the aircraft was making good time.

During the last leg of the race, the Dutch sense of decorum kicked in and the passengers deep-cleaned the entire cabin over the Tasman Sea. A Maori band welcomed the DC-6A, which completed the race in 49 hours and 58 minutes. The Viscount had arrived ten hours earlier, but thanks to the 44-hour handicap, KLM won the handicap section. After all of the baggage seals were checked, it was time to celebrate. KLM had won! The passengers and crew toasted their achievement with whiskey, before swiftly filling their empty stomachs with a full English breakfast, including sausages, ham and bacon. Not everyone was equally thrilled with this victory banquet.

The 10,000-pound prize won by the KLM crew was partly donated to a worthy cause in New Zealand, and the rest was divided among the emigrants and crew. After five days, some well-earned rest and numerous receptions and parties, the plane returned to the Netherlands, now making the usual layovers on the way. The crew got a festive welcome at Schiphol, and knighthoods were bestowed on Captain Kooper, Co-Pilot Griffith, First Telegraph Operator Kieper and First Flight Engineer Van den Ham.

With the dawn of the jet age and the increasing volume of air traffic, it became less and less exciting to organise a race of this kind. The London-to-Christchurch therefore became known as the Last Great Air Race.