I’m a Flying Blue Explorer-ish. I don’t fly often, which would normally put KLM’s partially renovated Crown Lounge out of reach. So it’s all the more special that I was allowed to take a look around at the opening. That’s because I took part in the Crown Lounge project group, where I was responsible for internal communications within KLM. So, I knew a lot in advance, but certainly not everything. 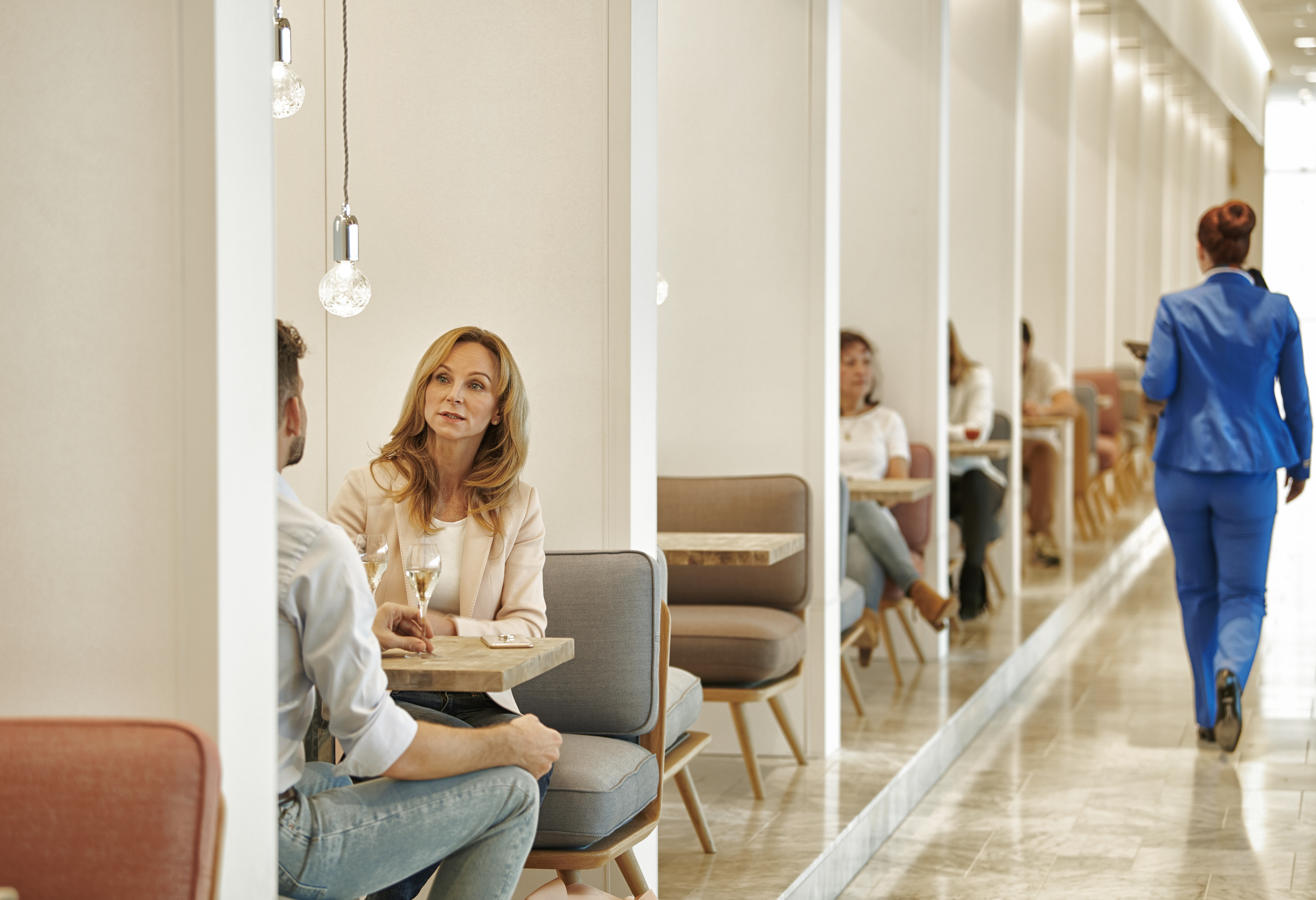 I have pretty poor spatial awareness and as often as not look at architectural plans the wrong way up.  Fortunately, I had access to a professional supply of information, which bombarded me with drawings and technical terms. As you might imagine, the project was extremely professional, as it should be. After all, the Lounge is where people go to relax and recover, to work, eat, and drink in unique surroundings. But, to make it as beautiful as possible, we first had to renovate. The aim was to create a living area of around 6300 square metres with almost twice the number of seats as in its previous configuration, but that took some perseverance. 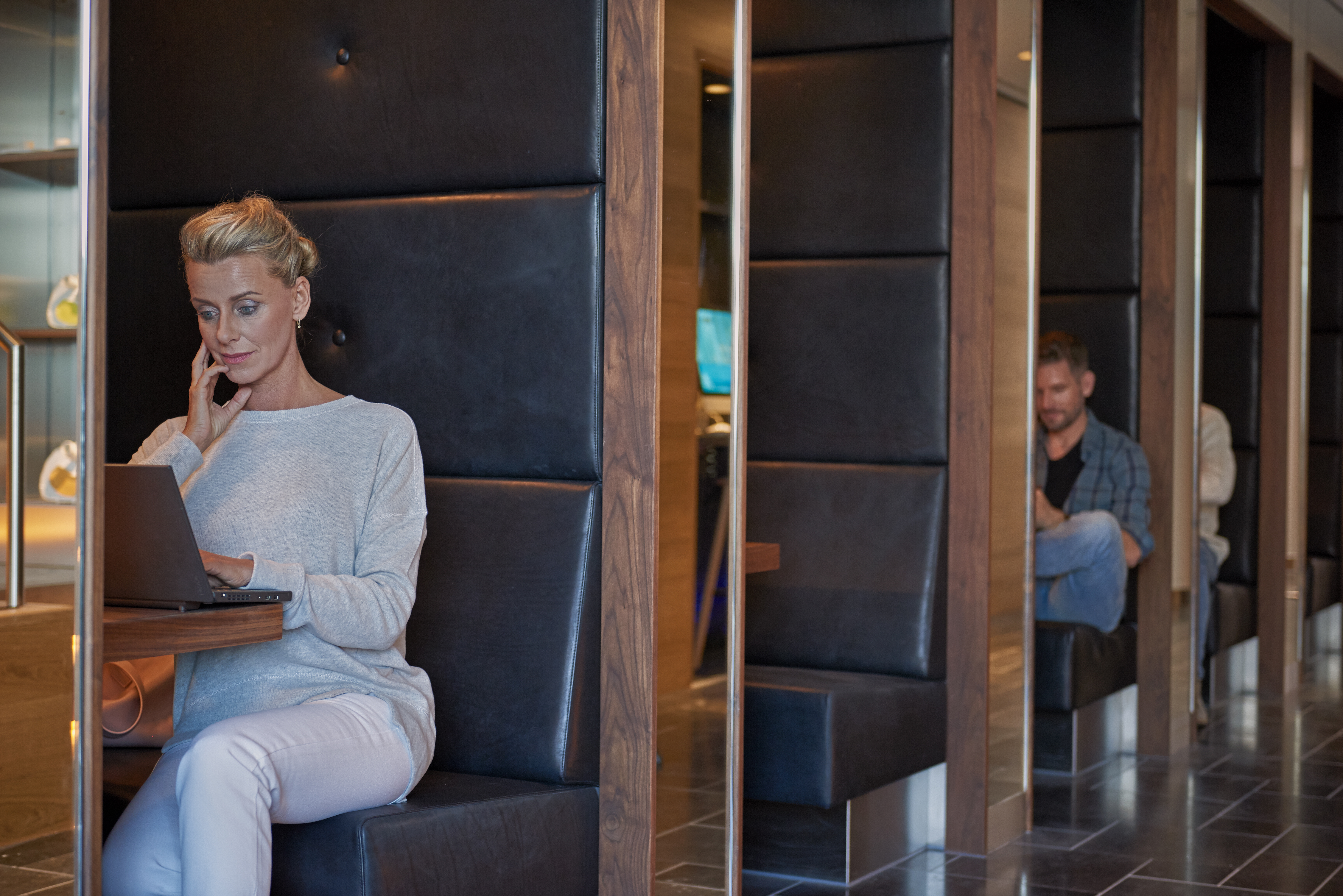 I went along regularly to see how things were developing. The construction placed a significant demand on everyone to be adaptable and flexible.  When I arrived at the Lounge I pretended as if I knew exactly which kitchen was open and which was shut. The construction work began with the closing of a part of the Crown Lounge. Customer access to the part that remained open was limited, as the occasional bucket of rubble was removed.

Meanwhile, passengers received the best possible service under the circumstances. It presented a real challenge as ceilings were opened up and the Lounge was full to capacity.

Rosé van den Berg is one of sixteen shift leaders who worked with a team of a hundred Personal Lounge Assistants to take care of customers as well as possible. “Sometimes, though, we had to turn people away during the morning rush hour,” she says. “We then gave customers a voucher to spend at Starbucks or another location at Schiphol. Of course, that isn’t what you want to have to do. We tried to warn passengers in advance, but that didn’t always work, unfortunately.” 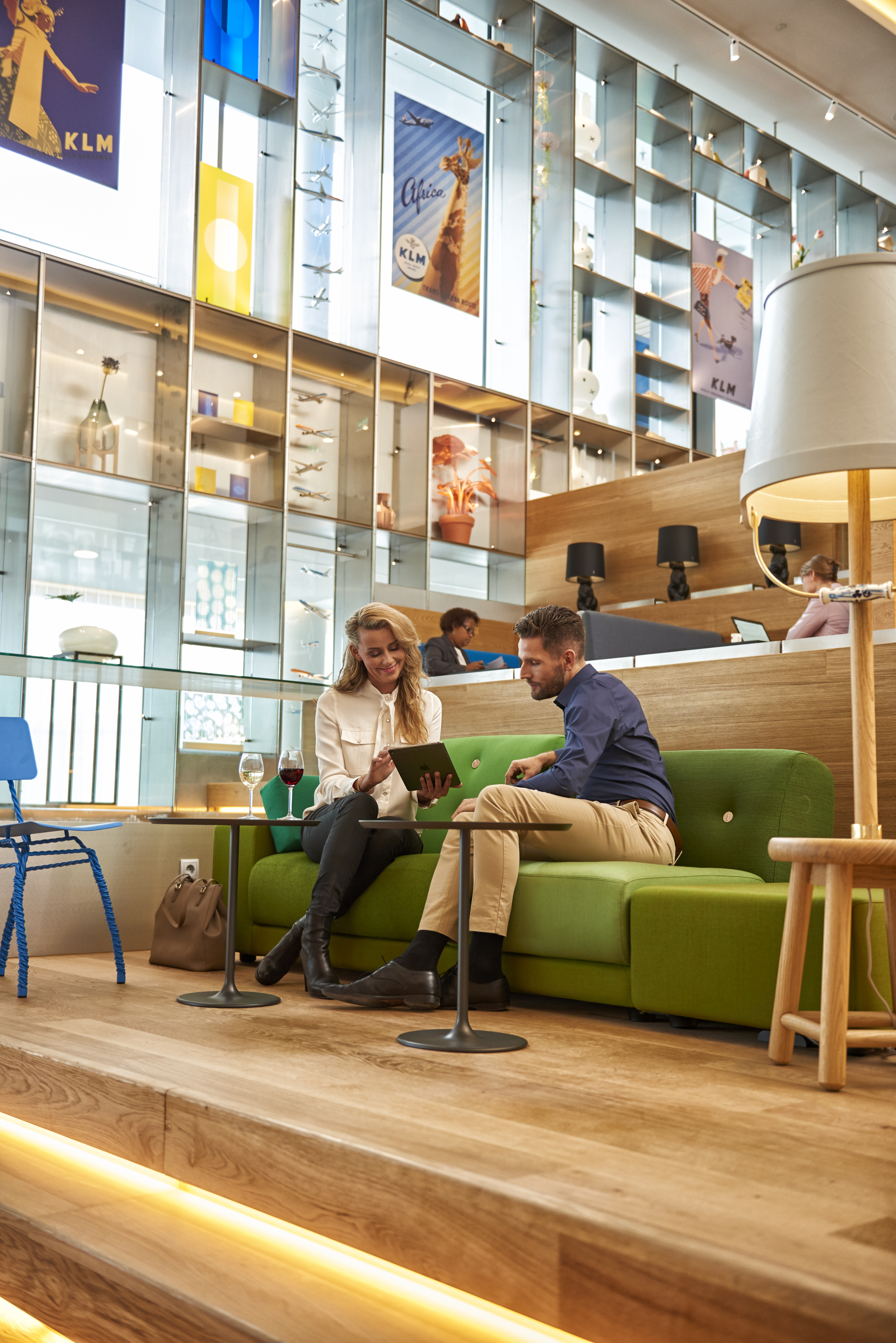 The Lounge’s first renovated section opened and all the drawings and plans had been realised. I walked right past the entrance by mistake – it’s been moved to the ground floor. But, once you’ve found it, the party begins. As you glide on the escalator it’s as if you’re passing through a miniature KLM village, because the glass walls lining the escalator contain five thousand KLM Houses.

Customers can register electronically using their boarding passes. Then, if necessary, you register to join a digital queue at a kiosk. Gone are the days of waiting at the entrance or in the Lounge. Whether you want to rebook, or if you have another query, a Personal Lounge Assistant will come to you, like a perfect host, while you relax and enjoy a drink. 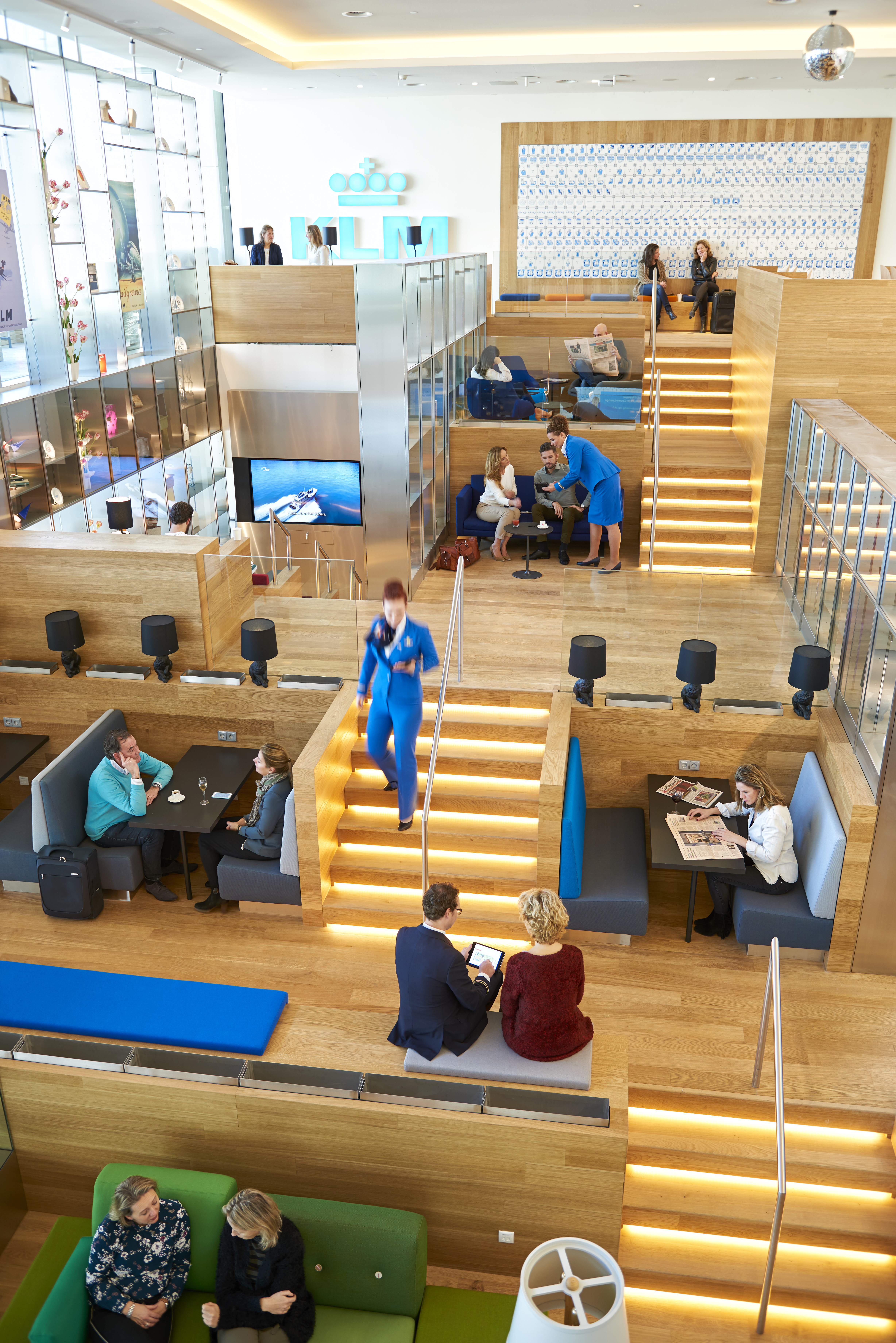 On the second floor an enormous space awaits you in the Polder which contains close to five hundred chairs. The Dutch Mountain and the Blue Bar are now open on the third floor. Restaurant Blue will open in the spring of 2019, where customers have access to exclusive products for a fee.

Right now, KLM partner Vermaat is providing quality meals in the Polder, where you have a lovely view of the apron with all the waiting aircraft. The Dutch Mountain is literally the highest point featuring the work of Dutch Designers such as Marcel Wanders and Piet Hein Eek. Company pride also radiates from an exhibition of a wide range of collectables, such as aircraft cards from the 1940s and china service with the KLM logo. You can view all this as you walk up the stairs to the Blue Bar. 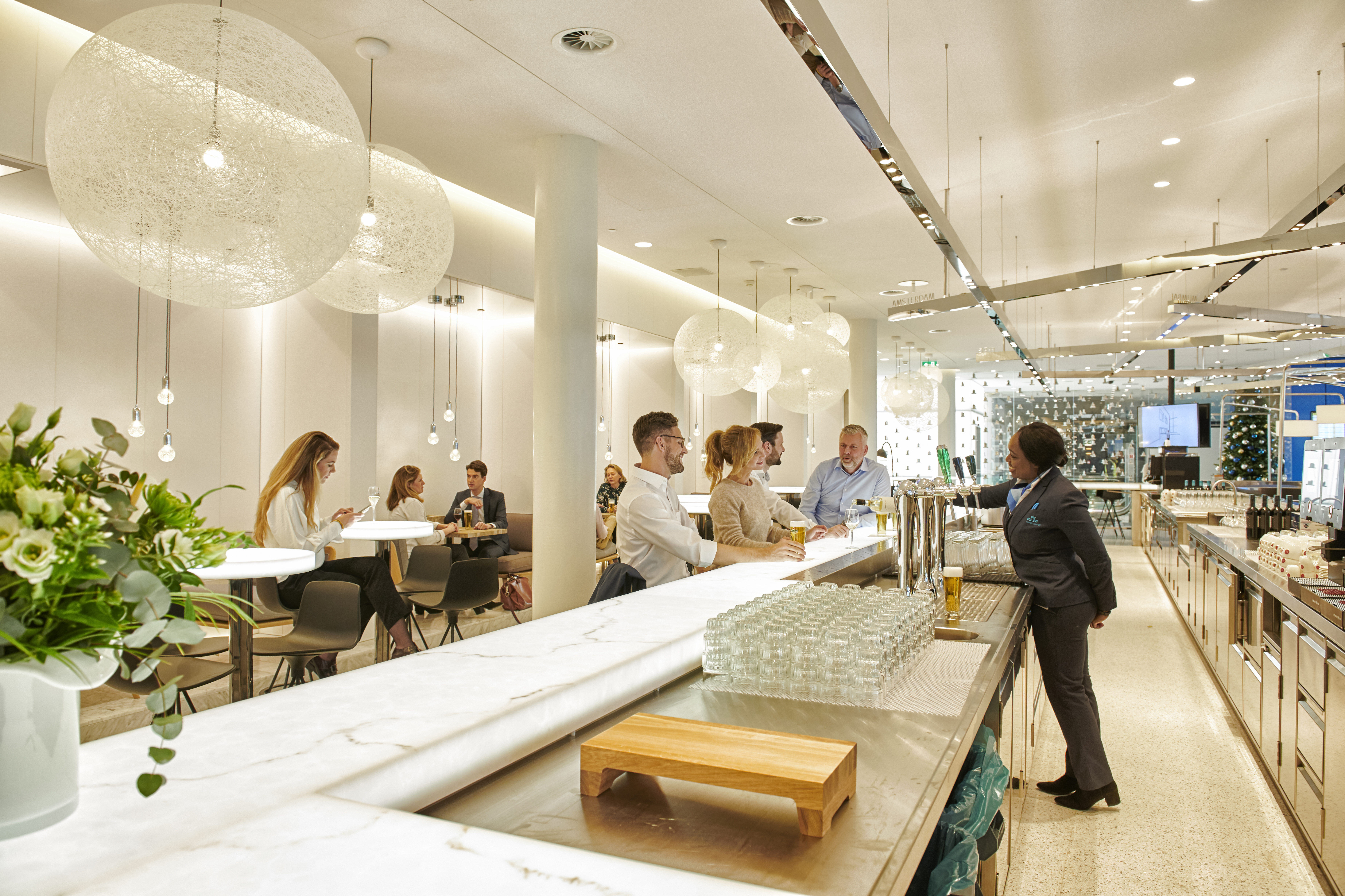 If you come to visit…

Please take note: There is still only limited access because another part of the Lounge has been closed off. For the time being you will have to shower at the Mercure Hotel. But once the Sea area opens, you’ll be able to bathe in complete luxury.

The new surroundings are already a breath of fresh air, whether for passengers or for Rosé and her colleagues. The Personal Lounge Agents beam with pride. I practically felt like a passenger myself and didn’t want to leave – not because I didn’t know the way. The Lounge was simply too attractive.

The Lounge is open from 4:45 AM to 10:30 PM, from the day’s first KLM/AF flight to the last. In the event of delays, the Lounge will remain open longer. The complete, new Crown Lounge is scheduled to open in mid-2019. Until that time, however, access will be limited.