Expeditions to the North Pole are still cause for some excitement, but back in the 1950s flying over the pole was something else. In 1954, SAS was the first airline to fly this route. KLM was also interested in the polar route, but it wasn’t really an option for a long time, because passenger traffic to Tokyo was too slow to make the route profitable. It wasn’t until 1958 that KLM took the plunge. However, the air traffic treaty between the Netherlands and Japan first had to be amended and negotiations proved to be a challenge. Once the creases had been ironed out, KLM was free to take this short-cut over a white and wondrous world, offering passengers shorter flying times and spectacular panoramic views. 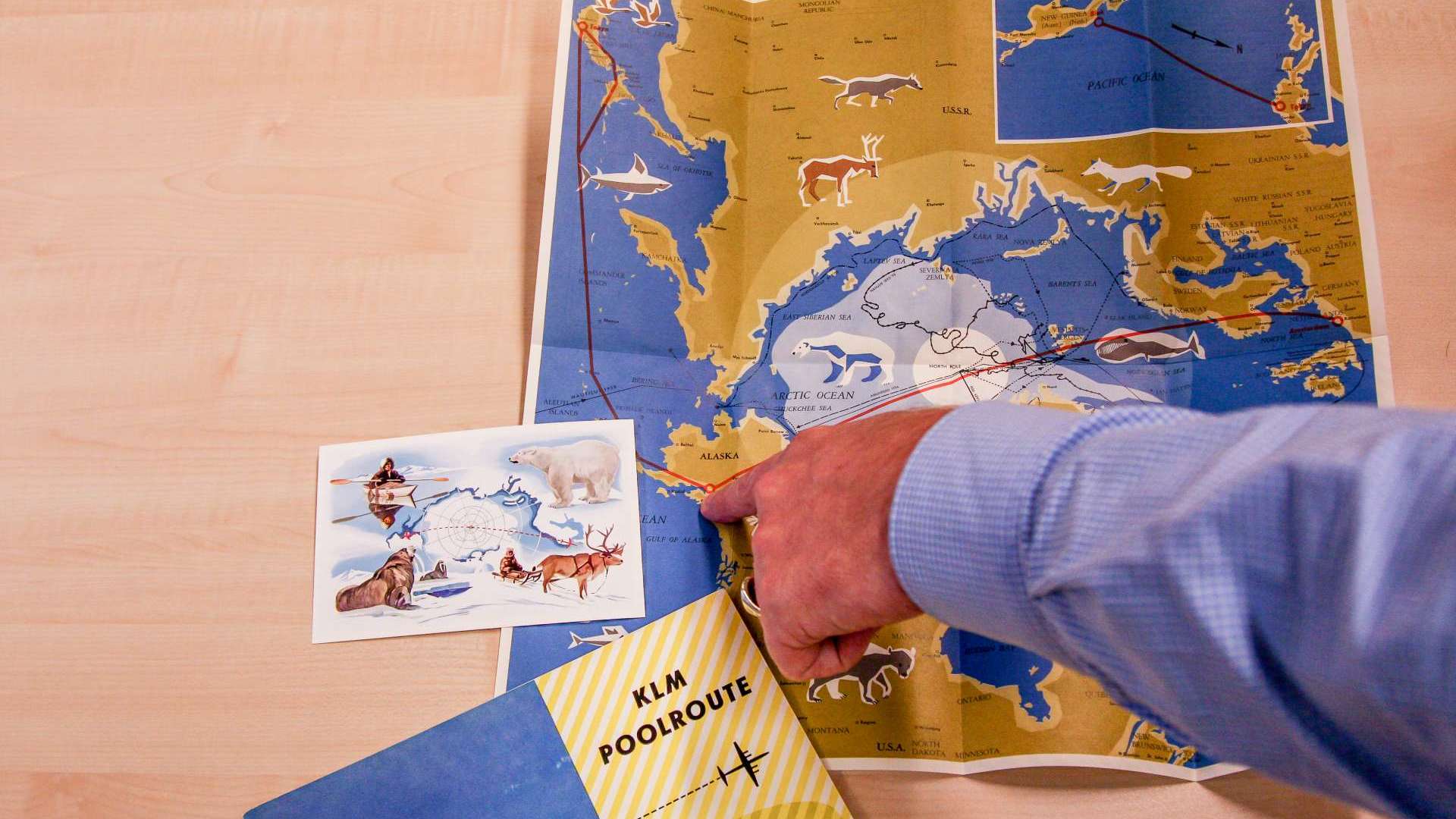 By 1957, a new type of aircraft had joined the KLM fleet. The DC-7C had a greater range than its predecessors, just under 10,000 kilometres, which made it possible to traverse the distance over the pole. The DC-7C also had the flight capabilities required to make the crossing. This meant that, if conditions were ideal, only one intermediate landing was required on the way to Tokyo, namely in the US city of Anchorage, Alaska. From there, the flight could head straight to Japan. The total flying time was 29.5 hours. If conditions were less favourable, the flight sometimes touched down in Stavanger or Reykjavik. Officially, KLM first flew the polar route on 3 November 1958. However, a trial flight was operated a month earlier, with a large media contingent on board, including camera crews from various news channels.

The KLM staff bulletin Wolkenridder also published a full report of our first flight over the North Pole, where the compass was never quite sure in which direction it should be pointing. Captain A.W. Ravenhill gave a clear account of the route they were to take. He informed passengers that, after the intermediate landing in Stavanger, they would be “heading due north until we reach the North Pole, and then due south.” Just before departure, KLM served its guests, including 16 journalists from local and international media, a specially blended Polar Cocktail to mark the occasion. It consisted of three parts vodka, two parts Drambuie, one part Campari and, if so desired, a slice of lemon. This cocktail was served again when the flight was directly above the North Pole. Fortunately, a hearty breakfast had been served by then, ensuring that this potent concoction did not end up in empty stomachs. Meanwhile, passengers were treated to superb panoramas of the icecap, lightly dusted with snow. The polar route was truly something special. 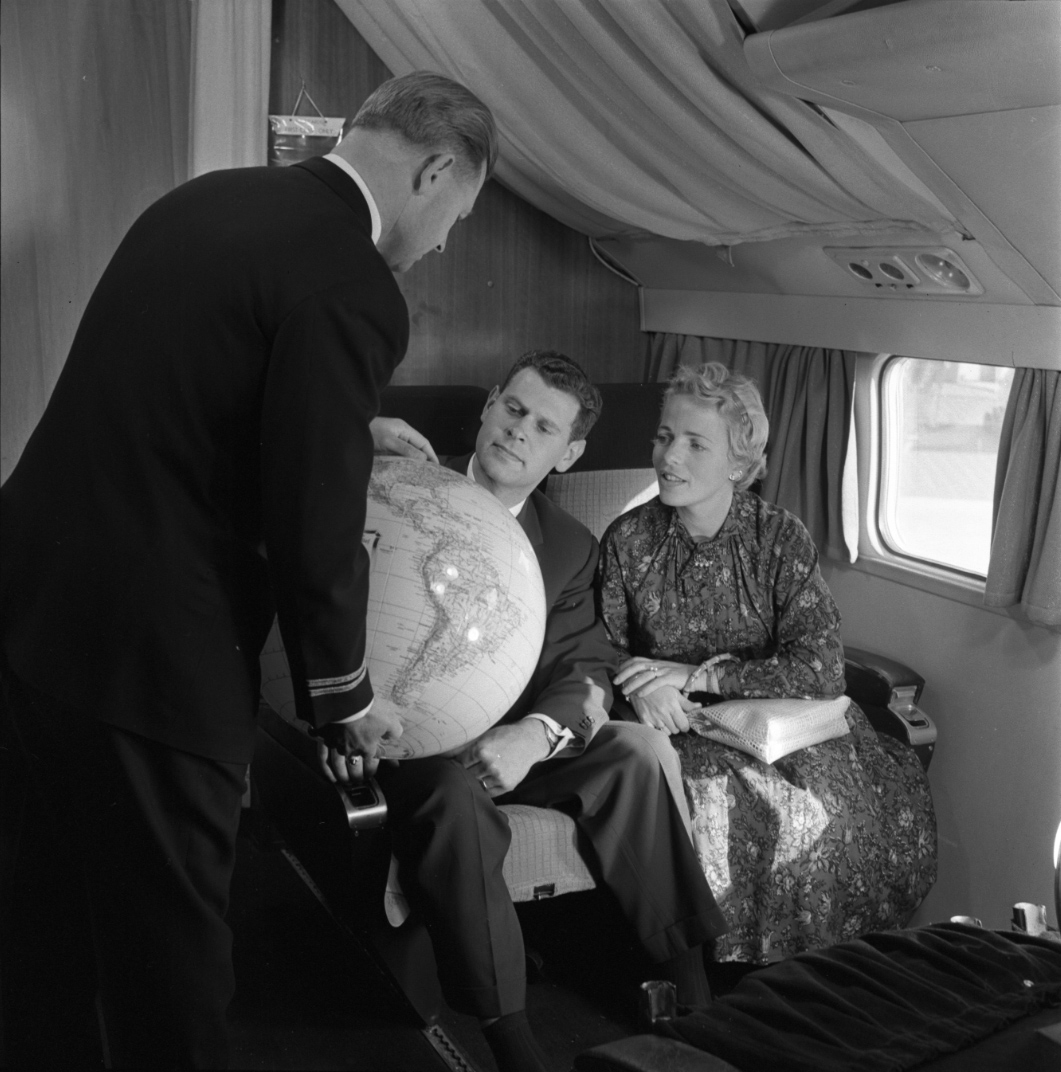 The feature in Wolkenridder ended with a short summary of the remarkable journey. “There and back within a week: two trips across the North Pole, two full days in the chilly, yet warm-heated Alaska, and two days spent exploring intriguing Tokyo. All of which was possible thanks to the “Coral Sea”, its dynamic crew and thorough preparations on the ground!” 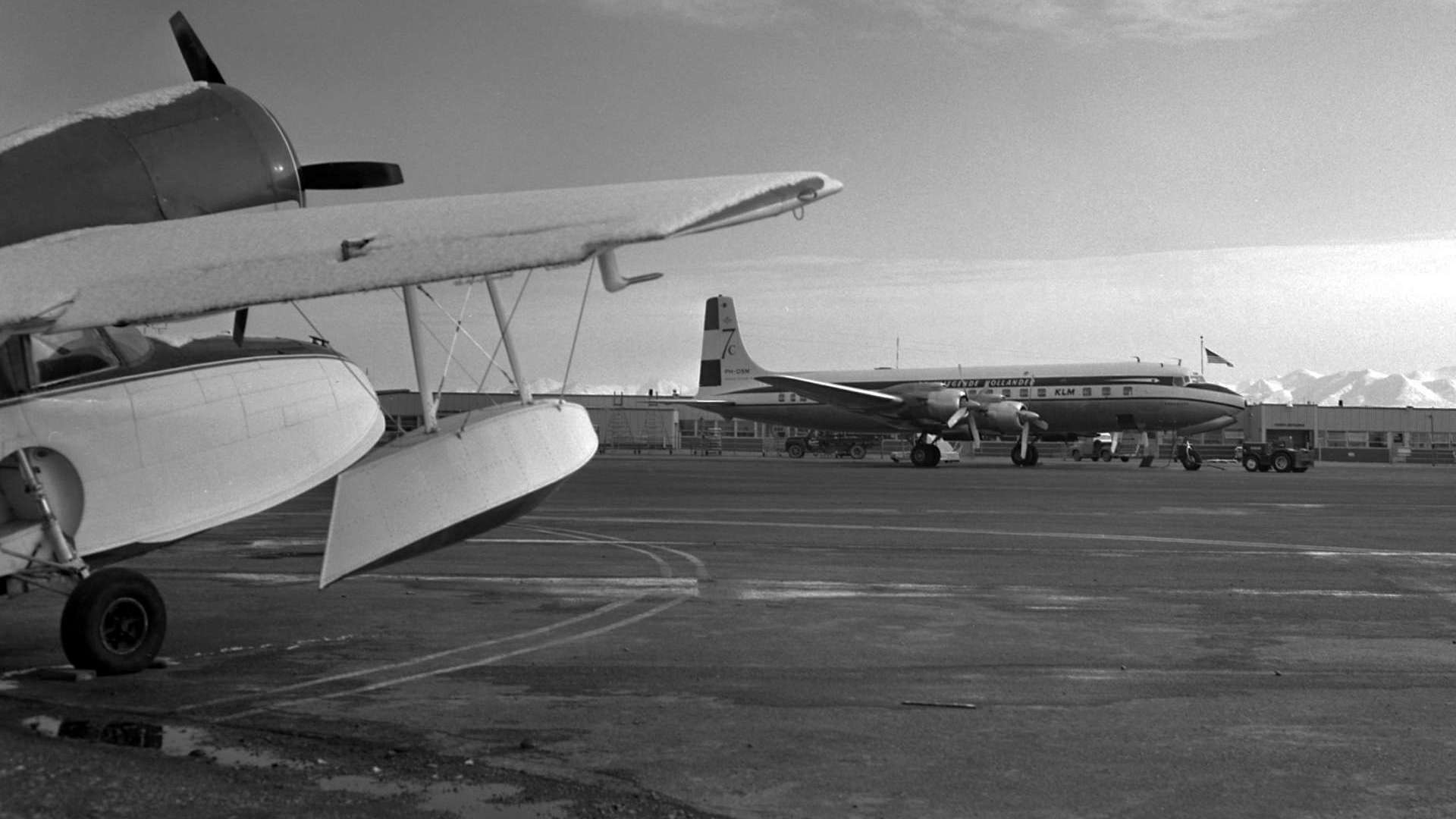 Only one intermediate landing

By November 1958, when the polar route to Tokyo was officially listed in the timetable, with an onward flight to Biak, KLM had printed a superb brochure that passengers received to mark their trip over the North Pole. The brochure was accompanied by a map and a picture postcard promoting this spectacular route and the fact that – weather permitting – there was only one intermediate landing on the way, which was truly unique in those days.