If you think of the Netherlands, you think of KLM :), cheese, clogs, windmills and… tulips! Around 800,000 people a year visit Keukenhof, which is the largest bulb flower park in the world and, because of its millions of flowers, one of the most popular destinations in the Netherlands. Maybe you’ve been there. If so, you might have seen Tulipa KLM! 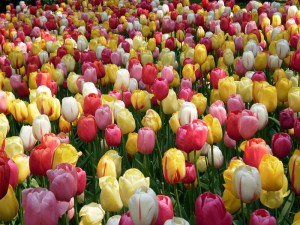 Originally the tulip comes from Turkey. So how did it get so popular in the Netherlands?

The tulip was introduced to Europe in the mid-16th century from the Ottoman Empire and became very popular in the Republic of the United Provinces, now the Netherlands. The first tulips were introduced in 1593 after a Flemish botanist sent some bulbs to his friend, a fellow botanist at the Hortus Botanicus at Leiden University in the Netherlands. After a burglary in the Hortus, the tulip spread all over the country and became widely known. Six harvests later – a tulip takes seven years to blossom – the tulip had become all the rage.

In 1635, forty tulip bulbs were sold for 100,000 guilders. At the time, eight fat pigs cost 240 guilders. A record was the sale of the famous tulip bulb Semper Augustus. It was sold for 6,000 guilders, the price of a canal house. 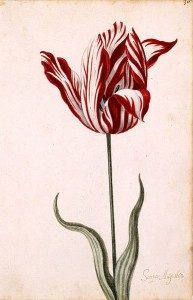 In the winter of 1636/1637 about 5,000 people were involved in the tulip trade, about 1% of the workforce. But it was at that time that public opinion turned against the tulip speculators. Many citizens saw speculation as a form of gambling and therefore as a serious sin. A stream of pamphlets, with often a harsh or sarcastic tone, warned against such practices. The writers of the pamphlets felt that the florists were neglecting their religion out of greed. They had surrendered to the pagan goddess Flora, the goddess of flowers in Roman mythology. The plague that struck the Netherlands in those days was seen as God’s punishment for the tulip trade.

The amounts that were lost in tulip speculation are not known. But it is certain that thousands of small speculators not only lost all their money but most of what they owned as well, as a significant part of the trading was in the form of goods such as cows, fruit wine, silver, horses, houses, paintings, land, etc.

Today the Netherlands is famous for its cultivated tulips and is one of the leading exporters of tulips and tulip bulbs.

As a Dutch airline, KLM couldn’t really remain without a tulip. So, when KLM celebrated its 90th birthday two years ago in October, and Keukenhof celebrated its 60th anniversary in the same year, the idea arose to name a tulip after KLM. And Tulipa KLM was born! Frederique van der Wal, who owns the lifestyle and flower brand ‘Frederique’s Choice’, was invited to take part in the naming ceremony with KLM President & CEO Peter Hartman. KLM is glad to associate itself with Dutch enterprises working on the international stage and applauds Frederique van der Wal’s initiatives in the flower sector. 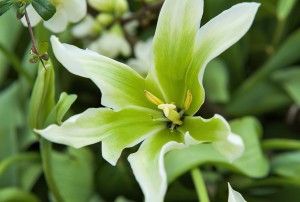 The light green and white flower has a blue centre and a fresh, youthful appearance.

Tulips originate from mountainous areas with temperate climates. They do best in climates with long, cool springs and early summers but they are often grown as spring blooming annual plants in warmer areas of the world.

Interested in the Tulipa KLM? Check it out on Frederique’s site.