‘All my dreams come true by sharing them with others.’ I wrote this sentence in my book about the power of social media for yourself and your company that was published last year, and I’ve repeated it several times in my blog.

I’ve been sharing on my blog since 2003, and also on Twitter (Dutch only) since 2007. You might say that I share my life ‘between bottles’; my dreams, my opinions, my criticisms and my enthusiasm.

One of the dreams that came true by sharing it was our ‘sentimental journey’ in the spring of this year. In 1986, exactly 25 years ago, I worked as a stewardess on a cruise ship in the Caribbean. It was there that I met my husband who came on board as an engineer, or to be more precise, a marine engineer. We visited seven islands a week with American and Canadian passengers on board. While the Elfstedentocht(Eleven Cities ice-skating race)was being run in the Netherlands, I was spending my Thursday afternoon lazing on a surfboard in the lagoon at Anguilla. 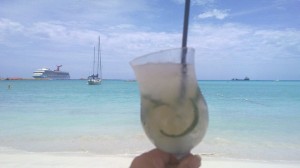 I turned 19 there and even passed my driving test on St. Eustatius. We always spent Wednesdays on Sint Maarten. That was traditionally the ‘evening out’ and Happy Hour at the Holland Beach House was legendary. In fact, they served croquettes there, and when you’re Dutch and you’ve been away from home for a few months, you long for good old-fashioned Dutch croquettes. 25 years later, I wondered whether they still served them and I also wanted to show my children where it had all started.

The trip was way outside our budget but by sharing my dream on my blog, it came true! In recent years, I’ve often been invited to tell my story about what social media can mean for companies and a few weeks after I shared my dream on my blog, the marketing manager of Oad – which has 220 travel agencies operating under the name of Globe – phoned me. He wanted to invite me to a meeting and asked if I was open to a barter deal. At first I didn’t realise what deal he meant because I’d just about forgotten what I’d written a few weeks before. But of course I accepted. I gave a lecture to the 220 travel agencies, delivered 200 books, and in May the four of us went for eight days to Sint Maarten, with KLM.

When we were there we also paid a visit to Saba where I discovered that The Captain’s Quarter where we used to drink every Tuesday in the spring of 1986 had been blown away by a hurricane in 1999. But on Sint Maarten we stayed in the Holland Beach House with a view of the bay, the same place we dropped anchor every Wednesday way back when. And there were still croquettes on the menu!

Petra de Boevere lives with her family in Breskens, in Zeeland where she and her husband run a ‘slijterij’, or off-licence, called De Vuurtoren. For many years, she has been using the Internet to draw attention to the ‘slijterij’ under the name ‘Slijterijmeisje’ (Slijterij Girl) (Dutch only) and the motto ‘Because life is too short to drink rubbish and too beautiful not to share’.

In 2009, Petra won the Social Media Star Award, a prize for people running a small business who make the best use of social media, and the Province of Zeeland’s incentive prize for innovation in tourism for her Seaweed Jenever.