When I’m working in uniform, I sometimes wonder how it has evolved over the past century. I joined KLM as a cabin attendant in 2002 and have had the pleasure of wearing two different uniforms since then. The first was the updated Nina Ricci design, which was later replaced by the current Mart Visser uniform. Because February is fashion month, I’d like to celebrate my love of vintage clothes and fashion by flying down memory lane to revisit KLM uniforms of bygone years.

Catwalk in the sky

It was wonderful diving into the history of KLM uniforms, guided by my colleague Cliff Muskiet, who is a KLM purser and uniform fanatic. Since 1993, Cliff has collected no fewer than 1,575 (!) women’s uniforms issued by 563 different airlines worldwide. He has had the honour of exhibiting a selection of his uniforms at the prestigious Kunsthal in Rotterdam. On 3 September 2019, he organised a very special ode to the KLM uniform, transforming the aisle of an aircraft into a catwalk aboard flight KL645 from Amsterdam to New York. The uniforms were modelled by seven crew members, who gave passengers a high-altitude, historical review of KLM uniforms from 1957 to the present day.

Cliff’s collection includes almost every KLM uniform designed since 1957. When we met to discuss the uniforms, he really brought them to life. It really was very inspiring to see and touch some of the pieces in his collection. So… Let’s fly back in time as we prepare to head into the future.

KLM is preparing to celebrate its 100th anniversary, which means it’s the oldest airline in the world still operating under its original name. We were founded on 7 October 1919, but it wasn’t until 1934 that KLM appointed its first onboard steward, Theo Boyeng. KLM recruited its first stewardesses in 1935.

Little is known about the first two women’s uniforms, but we know they were black, like the men’s. The lapel of the double-breasted jacket bore the words “air hostess”. The jacket was worn over a plain white blouse, accessorised with a small tie and a beret to top it off. 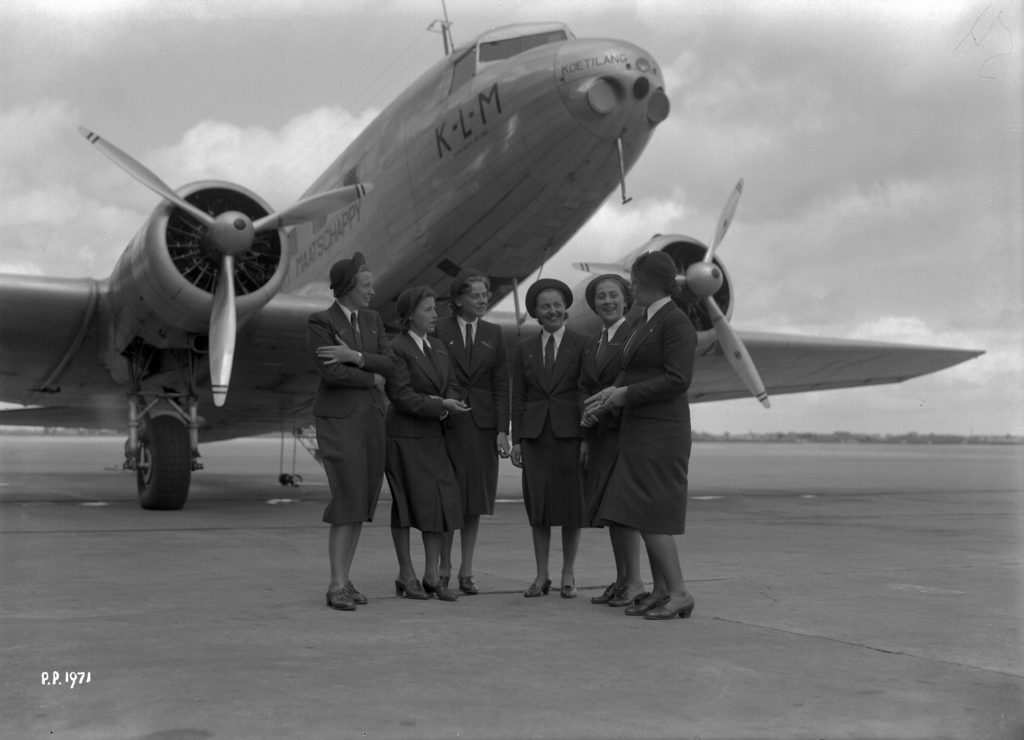 Around 1937, just before World War II, the women’s uniform was exchanged for something resembling a business suit with slight adjustments. The jacket was no longer double-breasted, but now had a single button. The lapel still bore the words “air hostess”, but the beret was replaced by a small hat. 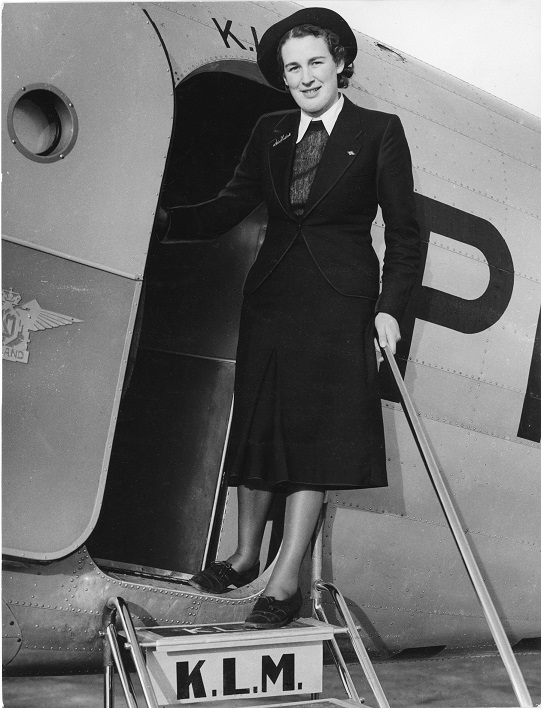 After the war, from 1948, stewardesses wore a grey-blue uniform with a matching cap, which was later replaced by a small hat. The “wings” badge appeared for the first time and the titles “stewardess” and “air hostess” were removed. It is unknown who designed the above three uniforms, but the craftsmanship was excellent. They were probably made by Amsterdam tailors, who cut the uniforms to fit each stewardess perfectly.

The Amsterdam fashion house Gerzon designed the uniform that stewardesses wore from 1957. This three-garment uniform was rather basic and conservative: a pencil skirt, jacket and small hat.

In 1962, a second hat was added, which was nicknamed “het kaasbolletje”, the cheese ball. This uniform was also dark blue and was worn over a white blouse with white gloves. The uniform also included a pale-blue-and-beige checked summer dress, designed for the tropics. The uniforms were hand-made by specialised tailors. 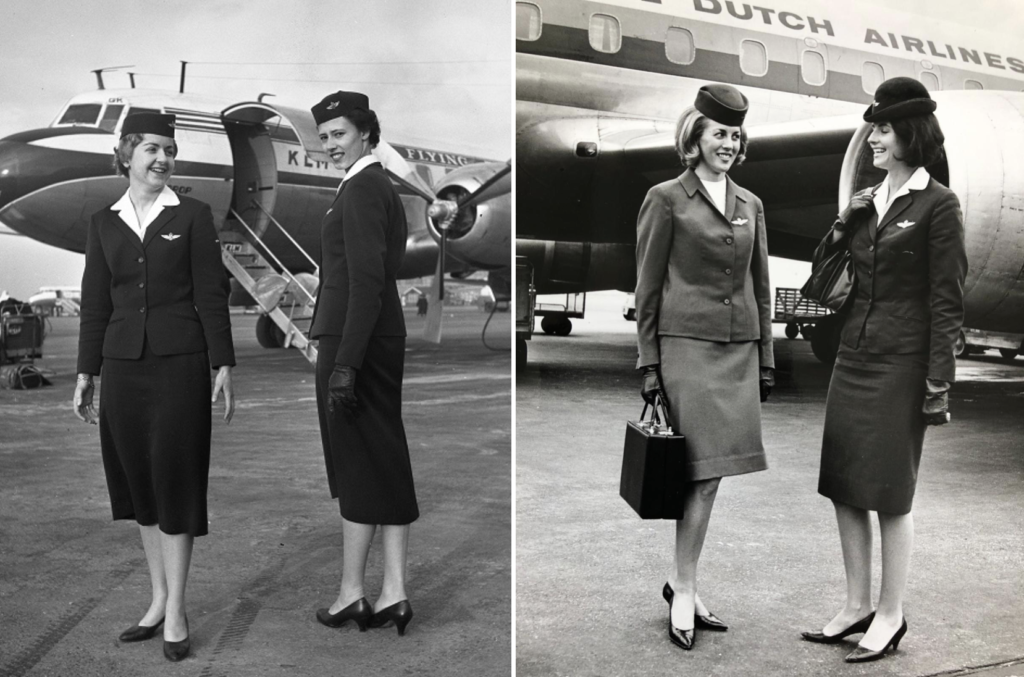 The 1967 uniform was part of a broader revamp, aptly named “New Look”, which also included tableware, meals and inflight service. The uniform was grey-blue and was the last in which dark blue was the dominant colour. One striking feature was the off-white blouse, with a round collar instead of the usual upright one. The blouse had spectacular sun-burst stitching emanating from the collar. The jacket, with its three buttons, was also more closely fitted and the skirt was shorter. When serving dinner, the stewardesses wore special pinafores called “kazaks”, which were available in different colours. It is unknown who designed the New Look uniform. If you have any idea, please feel free to drop a comment under this blog :) 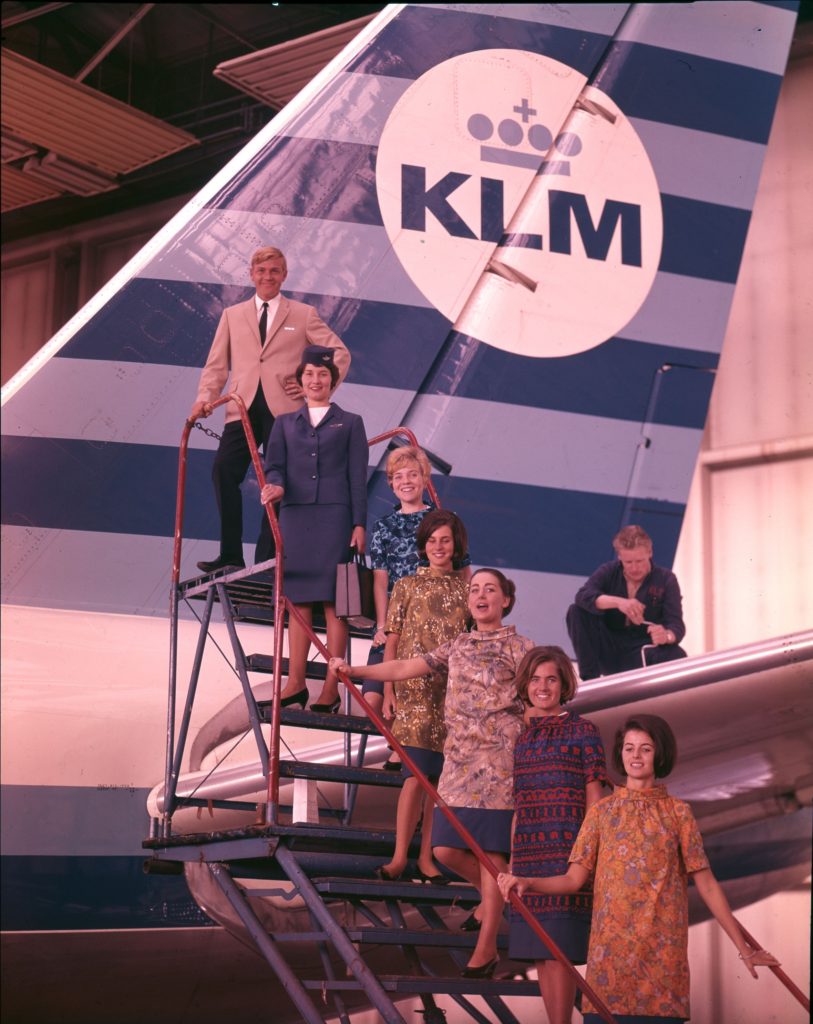 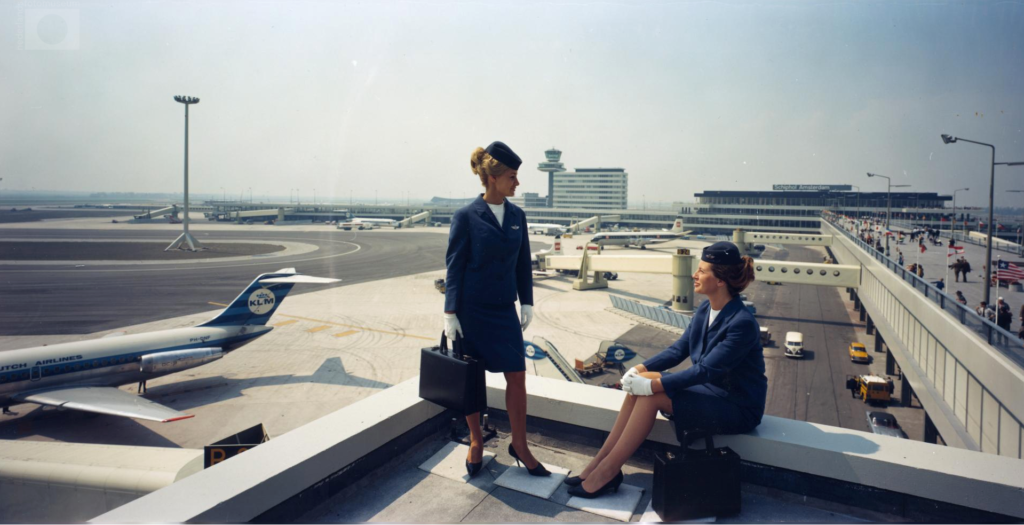 The 1970s got off to a great start with KLM introducing the sky blue we still wear today. The uniform, introduced in 1971, was created by a group of designers at the Fashion Academy in Arnhem, who were connected to the Konersmann company in Amsterdam.

Stewardesses were given more choices in those days: a sleeveless dress or pinafore with buttons. The uniform also included a jacket, blouse, serving dress, overcoat and a new model hat. This “Feel Sure” range was made of Trevira 2000, which was one of the popular, easy-to-clean, synthetic materials of the era. You could wash and hang-dry it. No ironing required. Uniform design was clearly gradually shifting from made-to-measure to off-the-peg.

While quite a number of airlines took 1960s fashion on board, including miniskirts and hot pants, KLM maintained strict uniform and hairstyle regulations. Skirts were to be worn to the knee and not above. The bright-yellow scarf added a gorgeous accent to the KLM-blue uniform.

Fun fact: KLM blue was introduced to the fleet with the arrival of the DC10 in 1972. 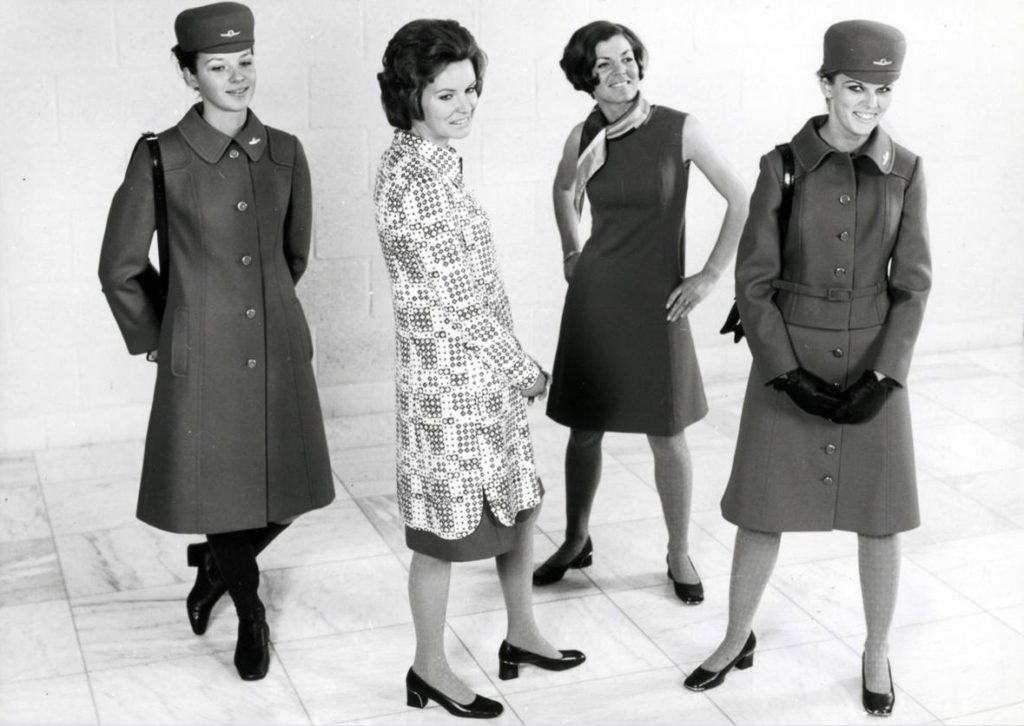 Four years later, it was time for another change. This was the first time a designer’s name was attached to the uniform. The designer was Wim van Hoek.

The 1970s were known as the Hippie Era. People dressed more casually and fashion switched to colours that weren’t as bright as they had been in the 1960s. Muted colours like black, brown and grey were more in vogue.

Although brown made an appearance in the KLM uniform, KLM blue remained the dominant colour. The uniform consisted of 13 pieces, was classical in style and included a medium-length skirt with four pleats at the front. The blouse was white with a pattern of dots and birds in brown and blue. A collarless jacket was worn over the blouse with a scarf in the same print as the blouse. Topping it all was a beret nicknamed “the egg cup”.

The summer uniform comprised a brown, cotton skirt with a pattern of blue birds. This garment wasn’t popular with crew, many of whom felt the skirt was inelegant. The wing badge on this uniform also had stripes, indicating the crew member’s rank. 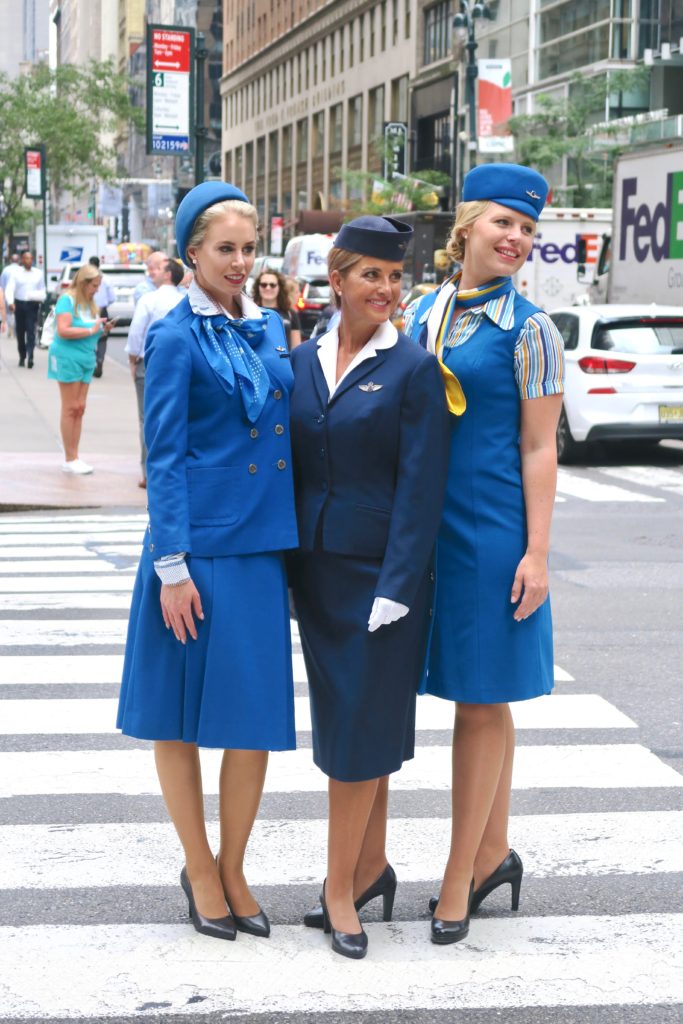 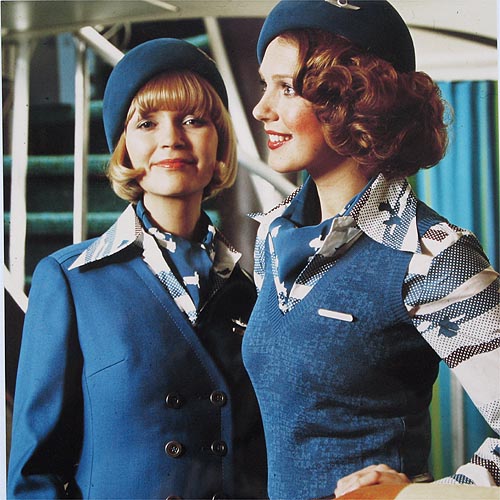 On 28 March 1982, a new uniform was introduced, designed by the House of Nina Ricci in France. This uniform reflected the trends of the 1980s with its wide, padded shoulders and colourful accents in the scarf. The skirt had a long slit at the front and back. The light-blue blouse, which had the KLM logo woven into the fabric, was available with long and short sleeves, and with a round or raised collar. The ranking stripes were subtly incorporated into the sleeve. This uniform also had a hat, though crew were no longer obliged to wear it. Consequently, very few did. 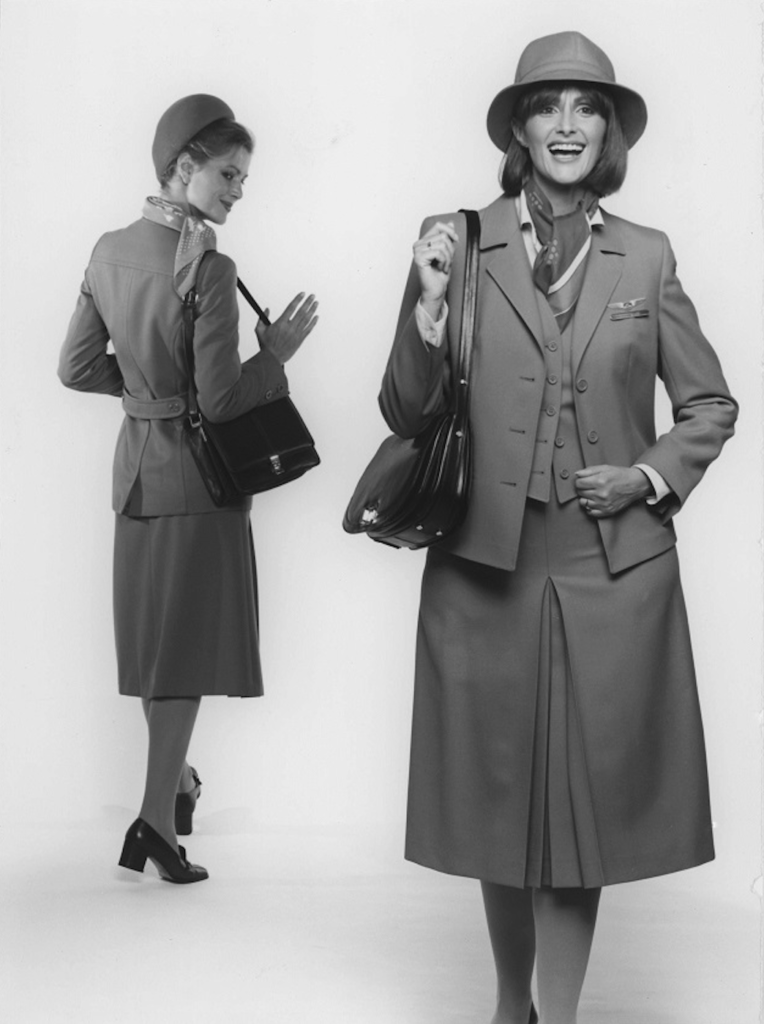 There was a mix of fashion influences on the way to the new century. Because the Nina Ricci uniform was popular, KLM decided not to have a new uniform designed, but to commission an update of the 1982 uniform.

Cabin attendants now had a choice of two skirts; one flared, the other straight. One striking item was the uniform jacket, which had a round collar and no lapels. The broad, padded shoulders ensured a sharp, angular silhouette. The ranking stripes were visible around the cuff of the sleeve, trimmed with a silver band, as they are today.

This was also the first uniform that did not include a hat. What it did include was a voluminous winter coat, nicknamed the “Bea coat” after Queen Beatrix, who wore similar garments to public engagements.

Cabin attendants were free to knot their scarf any way they pleased. This freedom of choice added an elegant personal touch to the uniform. The Nina Ricci design was worn from 1990 to 2010, making it the longest running uniform in KLM history.

Speaking of fun facts: the textile from the discarded uniforms was woven into the carpets used in the cabins of KLM’s new aircraft. The textile was also used for various KLM100 products.

There was a breakthrough in 1985, when Annemarie van den Burg became KLM’s first female purser. Many more followed soon thereafter. 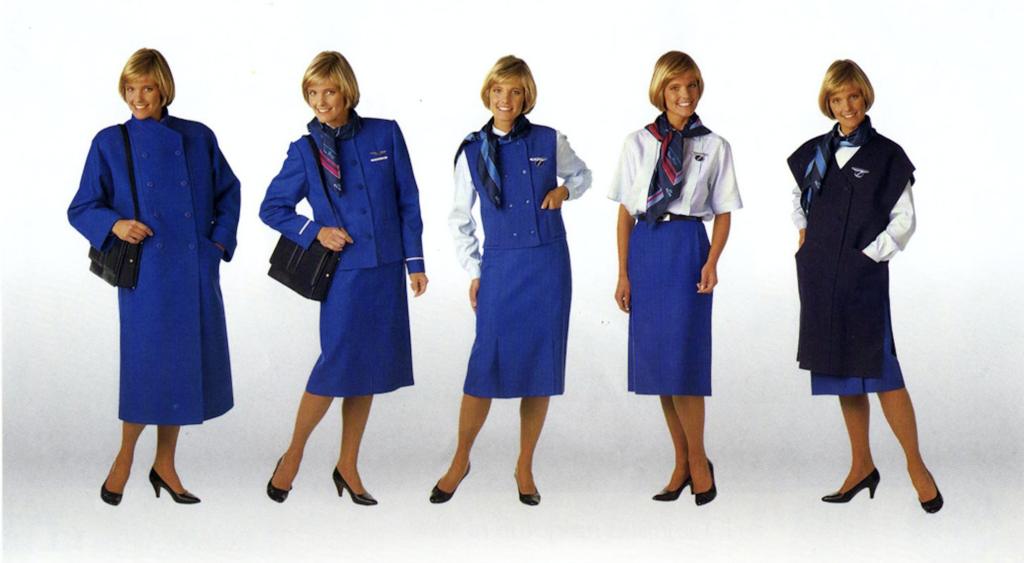 In 2010, the Dutch couturier Mart Visser took over from Nina Ricci. He added an orange touch to the uniform, symbolising KLM’s Dutch roots. There is orange in the trimming of the jacket, in the extra stripe on the senior purser’s sleeve, and in the colour accent on the scarf.

The uniform consists of a jacket, two different skirts, a waistcoat and trousers. The latter is unique, as this is the first KLM uniform with trousers for female staff. The current uniform is known for its feminine, elegant lines and modern look. Below you see me in the current uniform, in both the pants and the pencil skirt :) 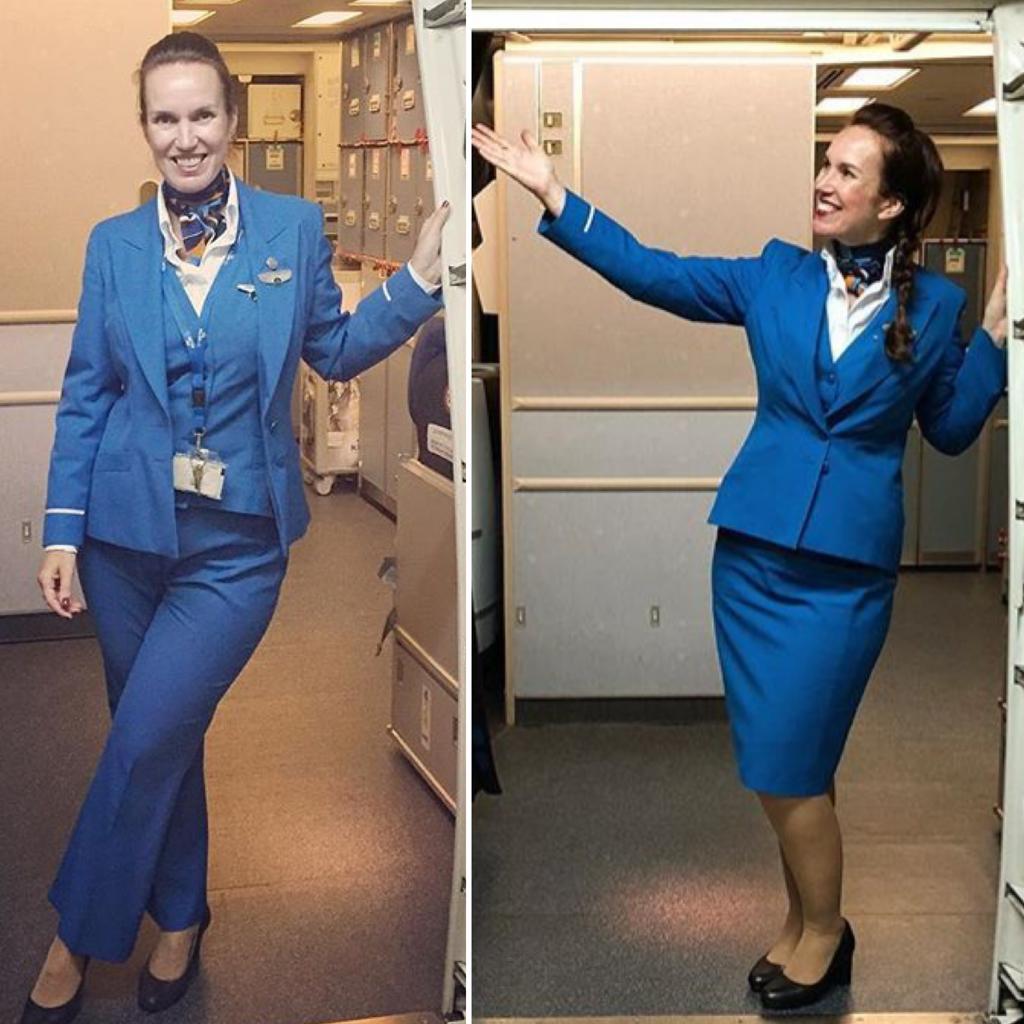 After Cliff and I had gone through the historical, KLM uniform timeline, I had an idea: let’s create a composite uniform from all the crew uniforms, an ode to the KLM uniform! There are so many garment gems among them, including pieces you could happily wear today as fashion items!

I contacted Hermanna Prinsen. Like Cliff and me, Hermanna is cabin crew. But, she is also a talented photographer and has worked for such glossies as “Marie Claire” and “Elle”. She recently won the highly coveted prize “Prix de la jeune photography”.

We brainstormed and an idea took shape. Together we would turn the subject of flying into high-end fashion. Cliff, with his enormous collection of KLM uniforms, and Hermanna the photographer. We sought out a beautiful location that brings many contrasting styles together, much like our assortment of uniforms. In a gorgeous room in Haarlem’s hotel Staats, we shot our perfect picture. And so an inspirational and creative collaboration between three passionately enthusiastic KLM employees was born.

How many different uniforms can you spot in this fashion shot? I look forward to reading your answers in the comments section below! 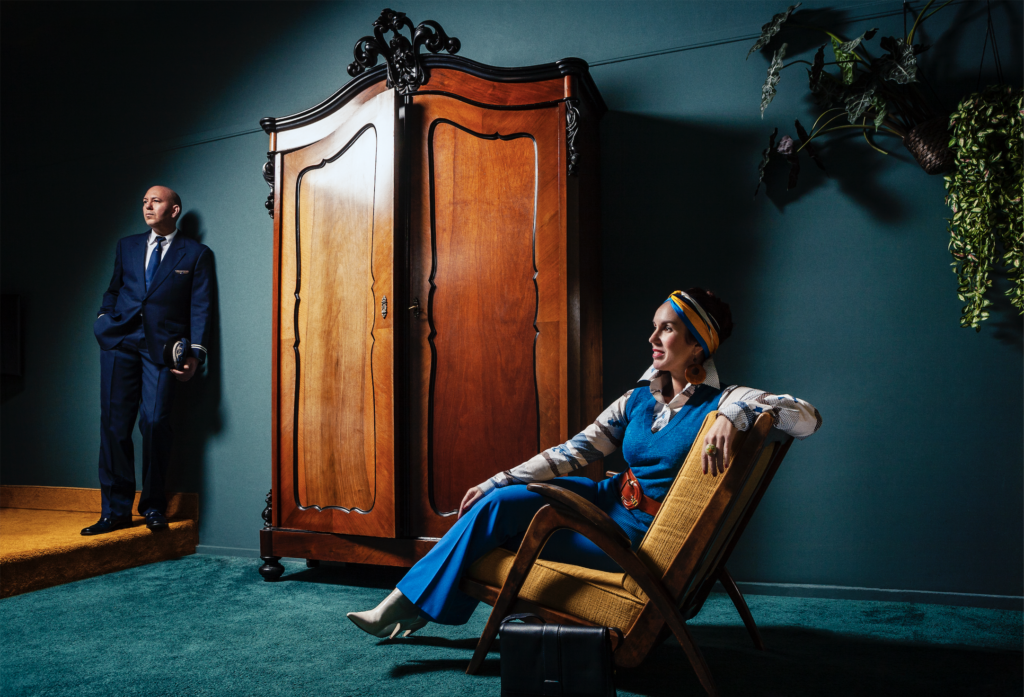 See you on the runway!

From the ground to the very highest altitude, all of KLM’s frontline staff are…