I’ve been wanting to go to Madagascar for ages, but stayed true to the old adage that I’d save the best for last. In the end, it was the second-last, but it still exceeded my expectations.

You want to taste it all, but you know that’s impossible. You have to choose and that means you have to give some glorious treats a miss. The country not only has a lot to offer in terms of landscapes, people and unique flora and fauna, but is also vast and sometimes very difficult to traverse because of the bad roads. We eventually opted to explore the central and western regions, where we encountered some roads that were almost impassable. Eventually we hiked downhill to the Manambolo River, where canoes were waiting for us to embark on three days’ paddling.

We then visited the famous Tsingy, the west coast with its many types of baobabs and sand dunes, the country’s most famous nature reserve Isalo, and the rain forest at Ranomafana. We saw all sorts of lemurs, chameleons and other animals that you won’t find anywhere else on earth. But the biggest surprise was waiting for us in Ambalavao, a town in the highlands, about halfway between Antananarivo and Tuléar. 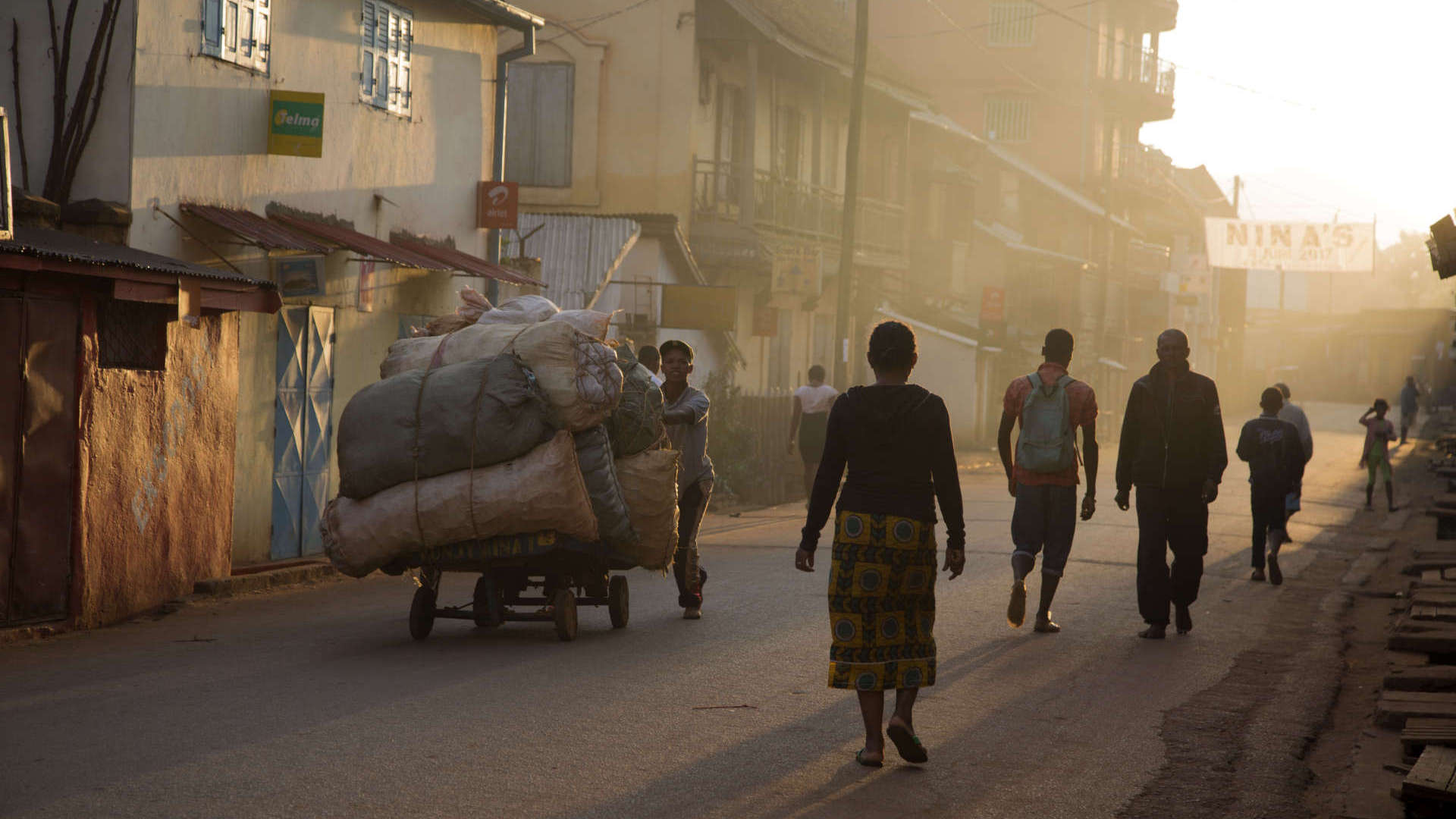 We’re in the bus to Fianarantsoa. On the way, the driver has loaded enormous bales of rice onto the roof. The little bus weaves all over the road and the driver has difficulty braking. We pass rice paddies, rocky mountains (including the country’s second-highest), deep valleys, and typical highland houses made of dark-red and brown mud with hardly any windows. It’s so picturesque that we decide to disembark at the very first village we arrive at, Ambalavao. The driver is astonished. What about the tickets we’ve bought through to the final destination? 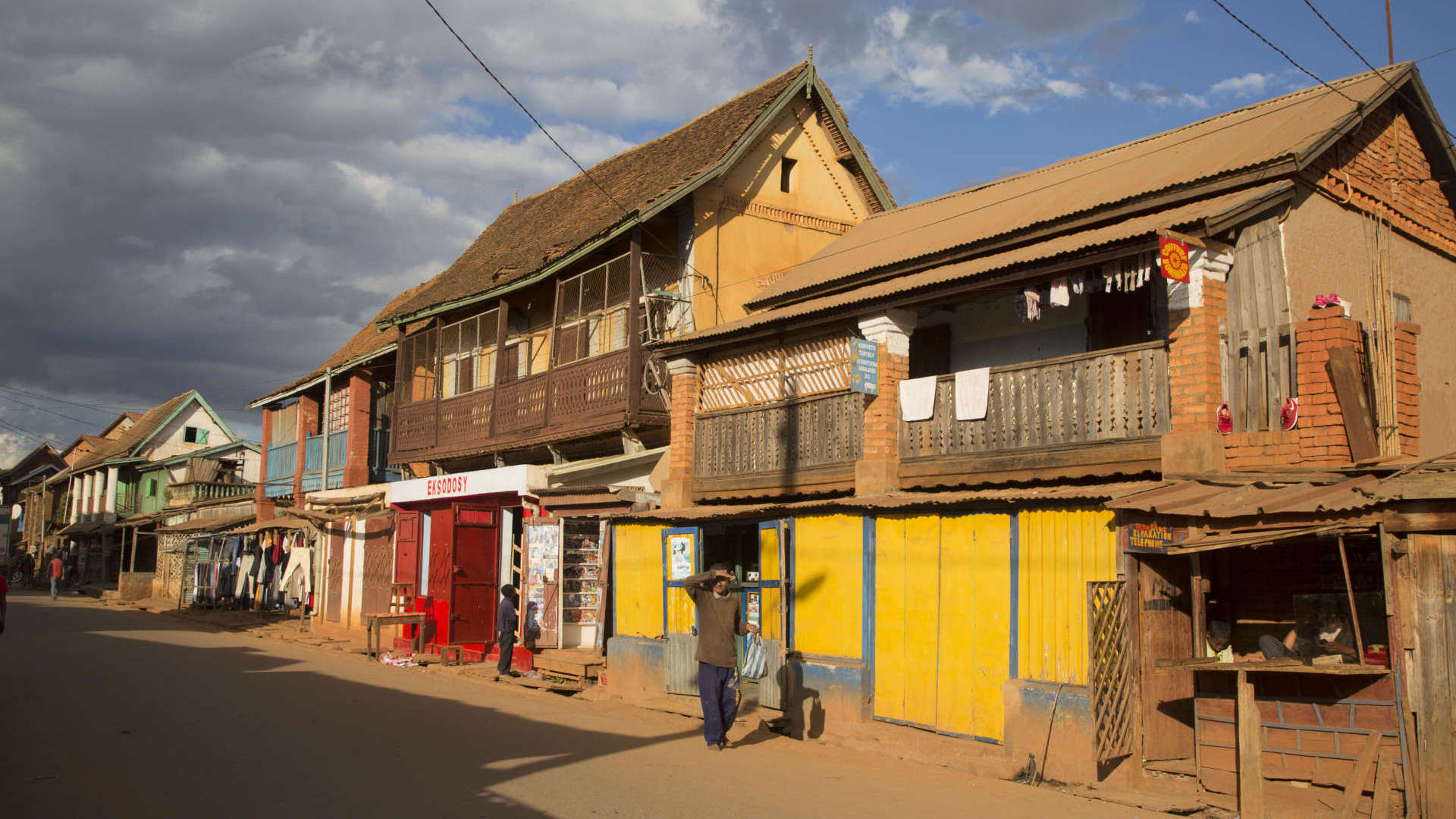 After quickly dropping our stuff in a little hotel, we wandered through the dusty streets. The late afternoon light heightened the old colonial houses’ aura of importance. The people were very friendly and intrigued, making us feel at home and very pleased with our spontaneous decision to stop here.

Ring-tailed lemurs in the wild

The next morning the autorickshaw driver picked us up with our guide and took us to Anja, twelve kilometres to the south. Mist clung to the rolling hills and high mountains. In Anja, we hiked for several hours through a forest at the foot of towering crags and past a mountain lake that mirrored the magnificent surroundings. We soon spotted our first ring-tailed lemurs, and saw dozens more as we walked. 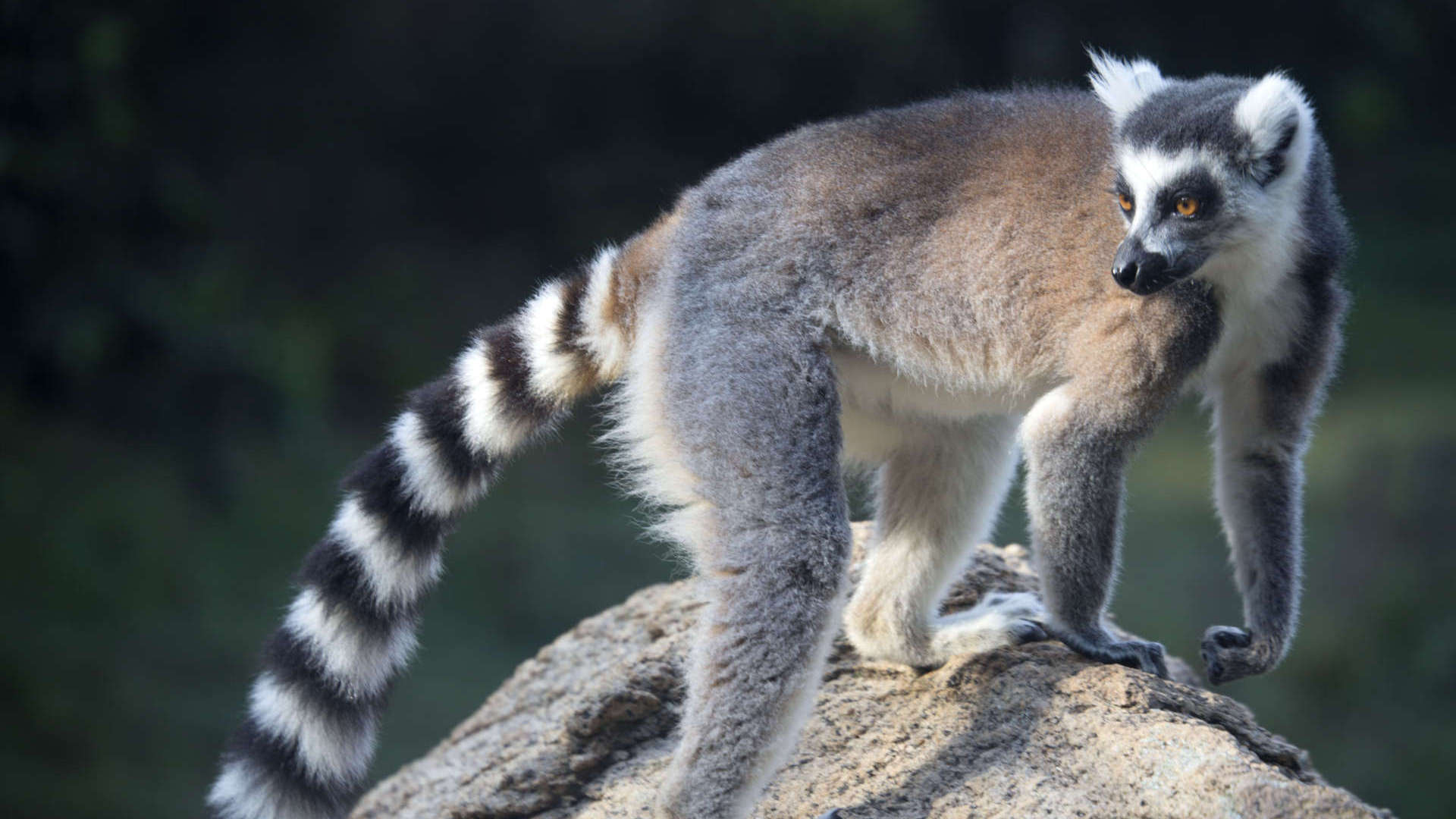 At first we saw them high up in the trees, where they feed on fruit and warm themselves in the sunshine. Later they came down to the lake where we could follow them. Before we knew it they were they were leaping through the trees, just above our heads, and down to the rocks in the lake to drink. The lemurs were far from shy as we watched a pair eating guavas in a tree.

Swinging along to the music

We left these unique primates and walked on through the forest, encountering several chameleons on the way. We climbed over rocks to various vantage points where we got a superb view of the landscape we had fallen in love with the previous day. To the amazement of our autorickshaw driver, who had been waiting for hours, we decided to walk back to Ambalavao to take in as much of the landscape as we could. 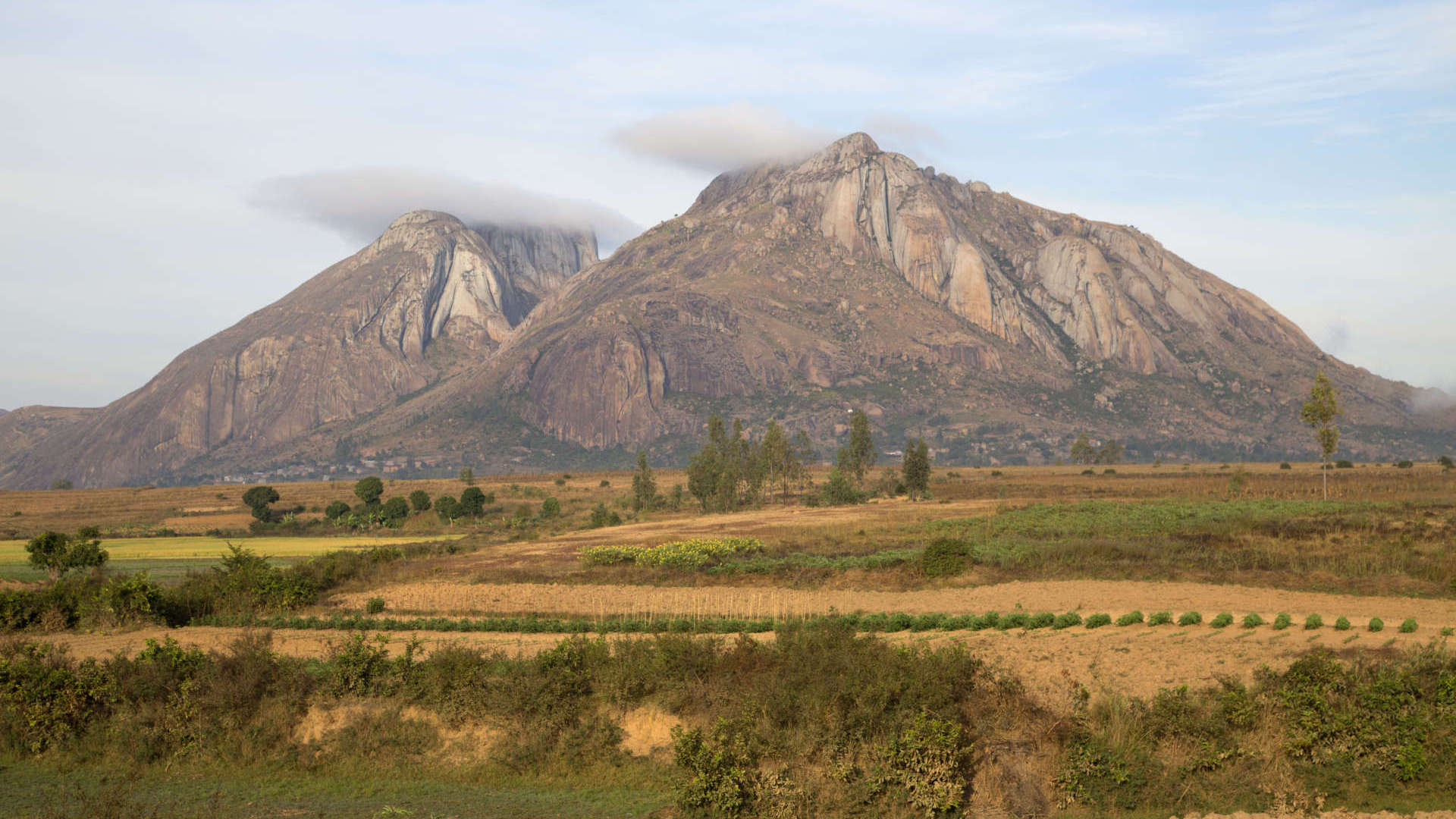 We passed rice paddies, surprised a village with a visit, dropped in to the church where we swung along to the music – causing great hilarity among the congregation – and chatted to hikers and cyclists on the way. When we finally got back to Ambalavao, we sat on a terrace and savoured local delicacies as we gazed amazed at all the different people making their way through the small, busy street. 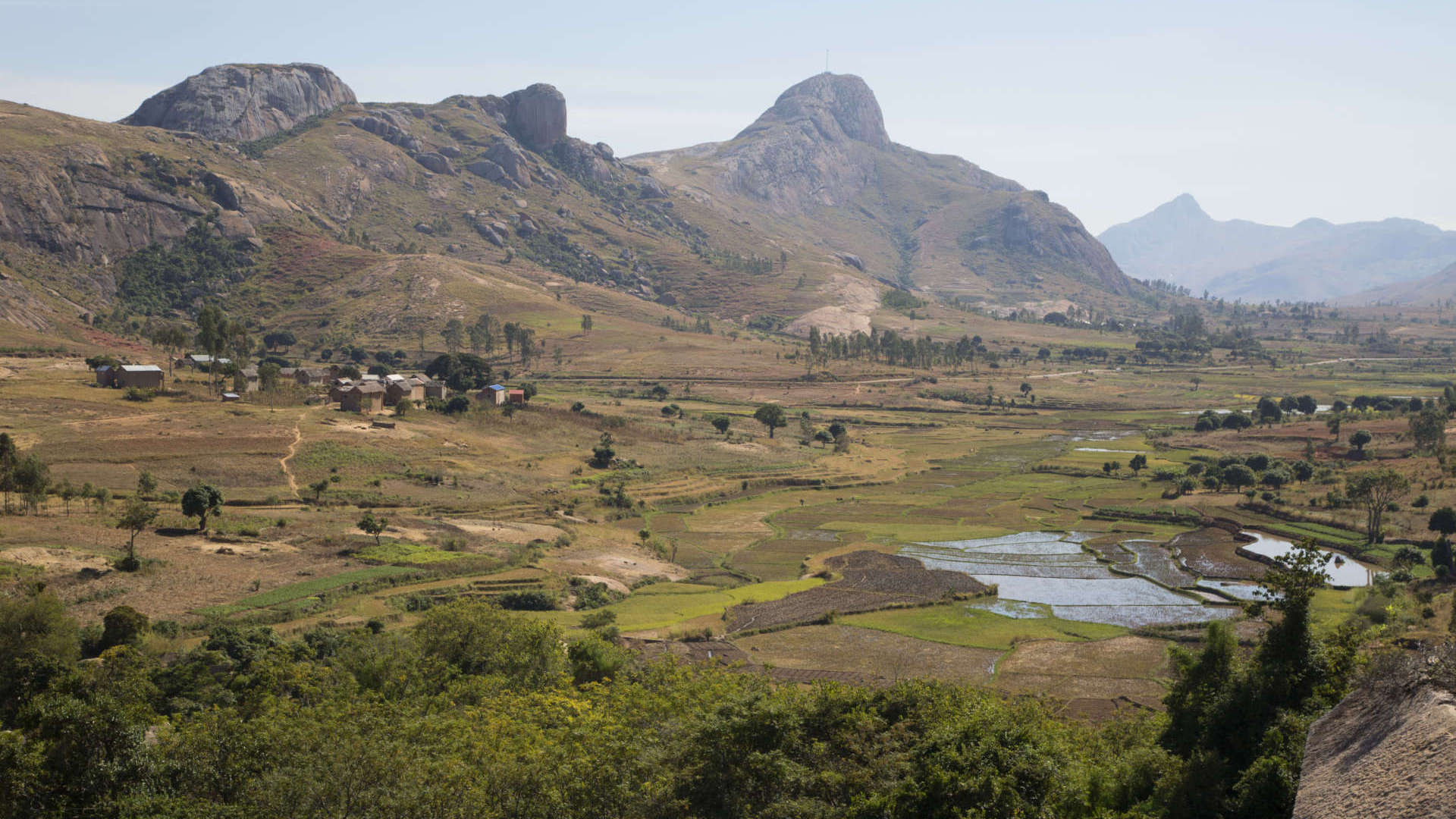 The next morning the same street was full of men carrying heavy loads, women with baskets on their heads, and children with school bags being ferried along in rickshaws. When we leave Ambalavao, we realise that our two days in this little town was one of the unexpected high points of our trip through Madagascar.