Every day, hordes of Kazakhs and foreign visitors flock to the golden egg perched in the crown of the Bayterek Tower, to place their hands in the gilded handprint of the nation’s president and make a wish. This is just one of the many fascinating and bizarre highlights of Astana, which KLM added to its network 3 May. 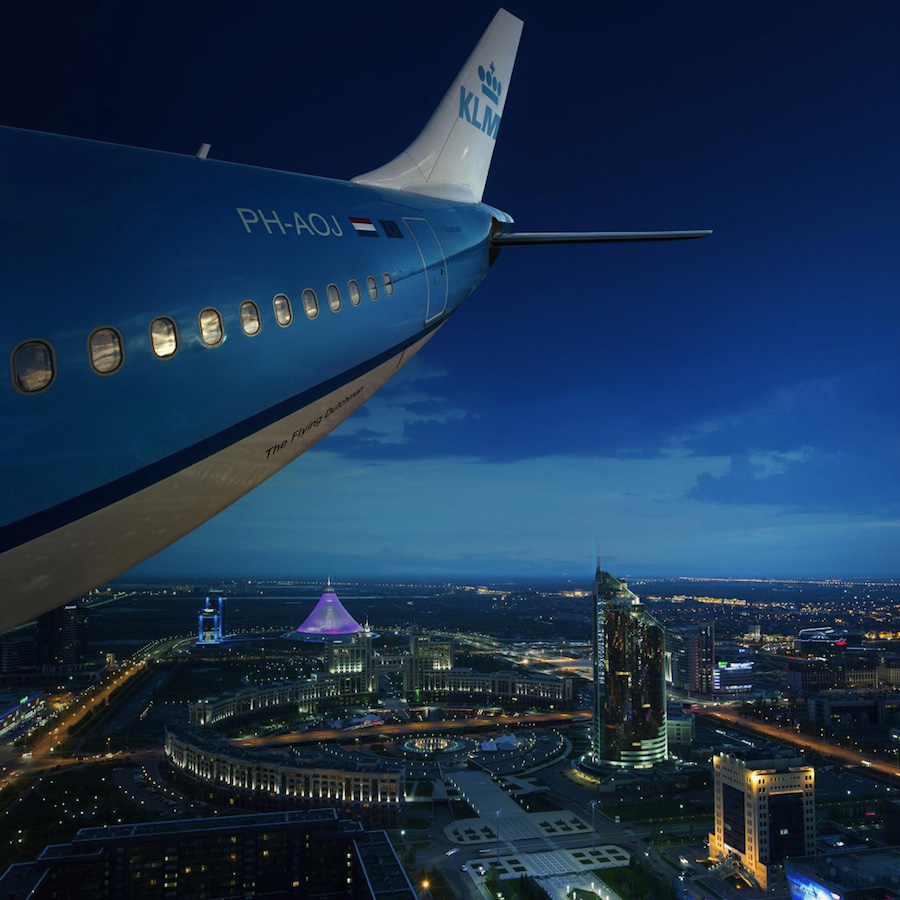 The view from the aircraft window is awe-inspiring. For hours on end, the world’s largest steppe passes majestically below until suddenly a Fata Morgana appears: a futuristic skyline of megalomaniacal monuments, sumptuous palaces and twinkling skyscrapers. Since 1997, the city of Astana (the Kazakh word for “capital”) has rapidly transformed into the hypermodern midpoint of Kazakhstan. The Japanese architect Kisho Kurokawa designed the master plan, which was enthusiastically elaborated upon by leading colleagues like Norman Foster. Here’s an overview of five must-see highlights in Astana, the surrealistic architectural capital of the New East.

1. Masterplan of the city

As was the case in Brasilia, Canberra and Ankara, the city of Astana was planned and built as the nation’s capital. After Kazakhstan’s independence in 1991, the city of Almaty, in the far south of this immense country, fulfilled this role. Surrounded by the world’s largest expanse of steppe, Astana is quite literally located in the middle of nowhere. The Japanese architect Kisho Kurokawa – creator of the Capsule Tower in Tokyo, the airport of Kuala Lumpur and the Van Gogh Museum in Amsterdam – designed the master plan and very soon a city of steel, concrete, glass and gold, with palaces, ministries, parks, avenues, monuments, malls and an airport, rose up out of nowhere. Kurokawa’s utopic vision of Astana materialised as a metropolis on the Kazakh Steppe. 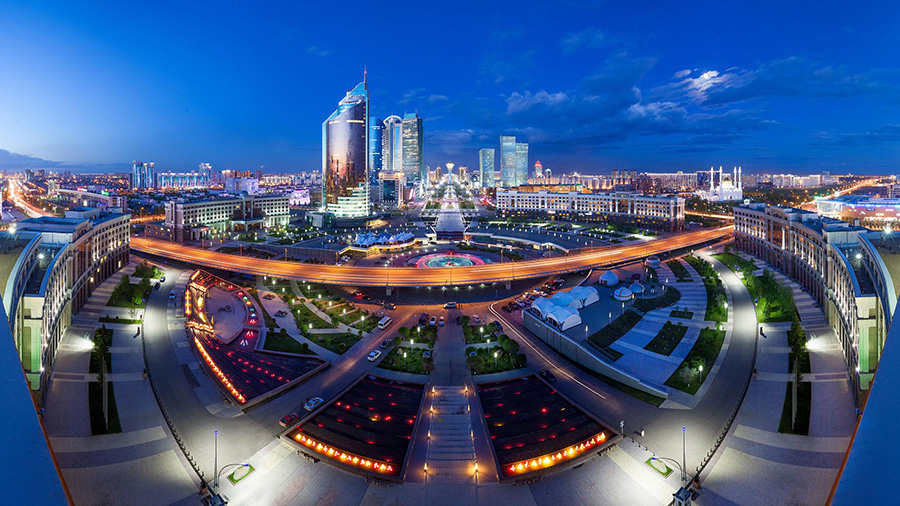 The master plan for Astana was envisaged by renowned architect Kisho Kurokawa.

Astana’s most eye-catching building wasn’t the work of a master architect. Local rumour has it that the Bayterek Tower was sketched on a serviette by President Nazarbayev, who left it to a Kazakh construction company to work out the details. The tower symbolises a huge poplar tree, with a golden egg in its crown, representing an ancient Kazakh fable about a mythical tree of life inhabited by Samruk, a magical Bird of Happiness.

The gilded egg – perched at a height of 97 metres, celebrating the year 1997, when Astana became capital – has an observation platform offering 360-degree views of the city. It also boasts an ornate pedestal that carries the gilded handprint of the president. Visitors who place their hand in that of the president are allowed to make a wish, after which the Kazakh national anthem is played via a loudspeaker. 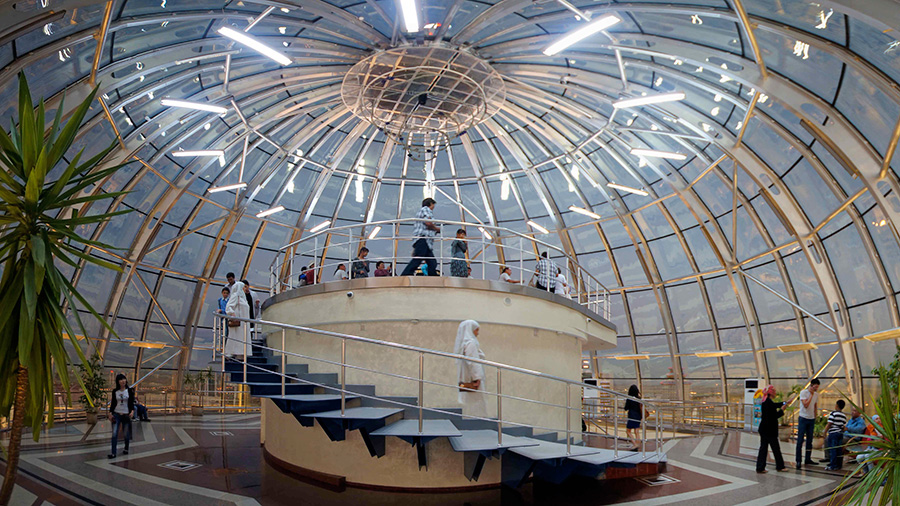 The viewing platform of the Bayterek Tower at a height of 97 metres. (photo: Ken & Nyetta)

The centre point of Astana, both literally and figuratively, is the presidential palace Ak Orda, which means “The White Horde”, but is also referred to as “The White House”. The Swiss-based corporation Mabetex, owned by former Kosovar president Behgjet Pacolli, which previously renovated the Kremlin in Moscow, erected this sumptuous palace in just three years.

The palace is adorned with gilded features, as was the case in the Kremlin, and 21 different types of marble were flown in from all over the world for the floors of the many ballrooms, including the 10-metre-high Great Hall, which measures 1,800 square metres. The square in front of the palace is flanked by two massive glass towers, which are also decked in gold, earning them the local nickname “The Beer Cans”.

The Ak Orda is not open to the public, but President Nazabayev’s former palace, which has been renamed “The Museum of the First President of the Republic of Kazakhstan”, is accessible. 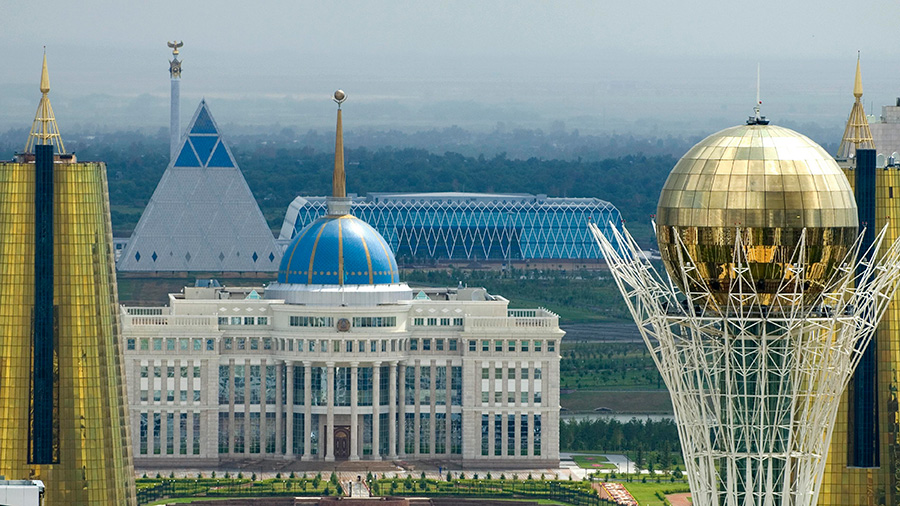 The presidential palace features 21 different types of marble, flown in from all over the world.

Architect Norman Foster gained worldwide fame with his designs for the Reichstag in Berlin, the Hearst Tower in New York and the Millennium Bridge in London. In Astana, he previously built the pyramid-shaped Palace of Peace and Reconciliation, but his latest accomplishment is the Khan Shatyr (Royal Marquee), a mall-cum-entertainment complex in the shape of a 150-metre-high, transparent circus tent.

In it you will find outlets for Armani, Pull & Bear and Topshop, as well as a miniature golf course, tennis courts, a movie theatre multiplex, a park with ponds and a running track, a food court and sidewalk cafes. Even when it is 40 degrees below zero outside, the synthetic, inflatable fabric used for construction ensures pleasant temperatures indoors. The temperature in the tropical resort on the upper floor, which features a beach and palm trees, is always around 30°C. The beach club serves chilled cocktails on the warm white sand, which was imported from the Maldives. 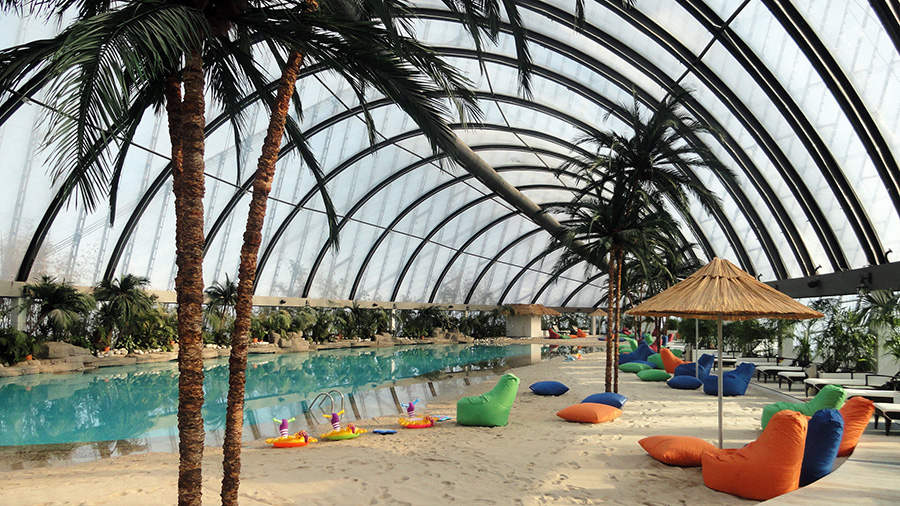 Even when it’s -40°C outside, temperatures are tropical on the beach inside Khan Shatyr. (photo: upyernoz)

Almaty made unsuccessful bids for the Winter Olympics of 2014, 2018 and 2022, but Astana did manage to attract a major event: Expo 2017, which will see hundreds of countries and ten international organisations flocking to the Kazakh capital. Construction is taking place at a hectic pace. A completely new district is being built on the left bank for the Isjim.

Some of the world’s best architects competed for this mega-project, including Snøhetta (Norway), Coop Himmelb(l)au (Austria) and Mecanoo (Netherlands), but the bid was won by American architect Adrian Smith, who previously designed the current and future tallest buildings in the world, the Burj Khalifa in Dubai and the Kingdom Tower in Saudi Arabia. The Expo 2017 is expected to attract 2 to 3 million visitors to the Kazakh capital. 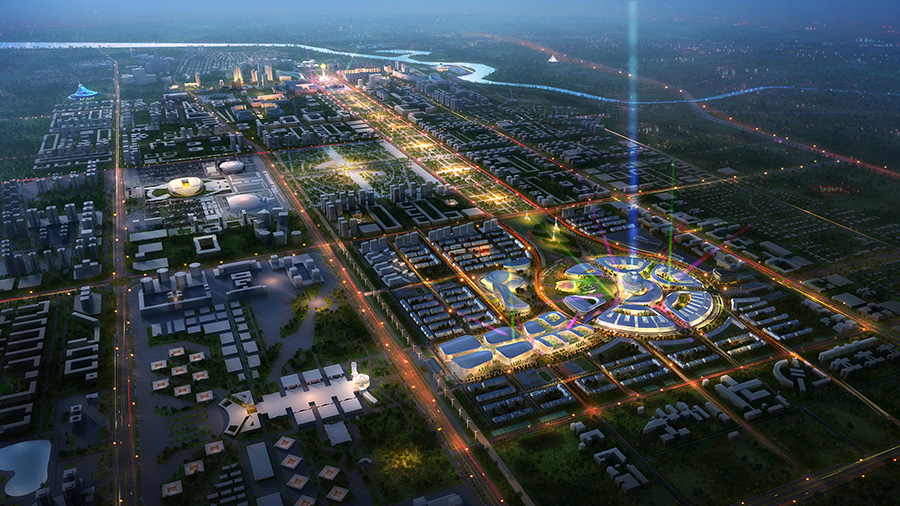 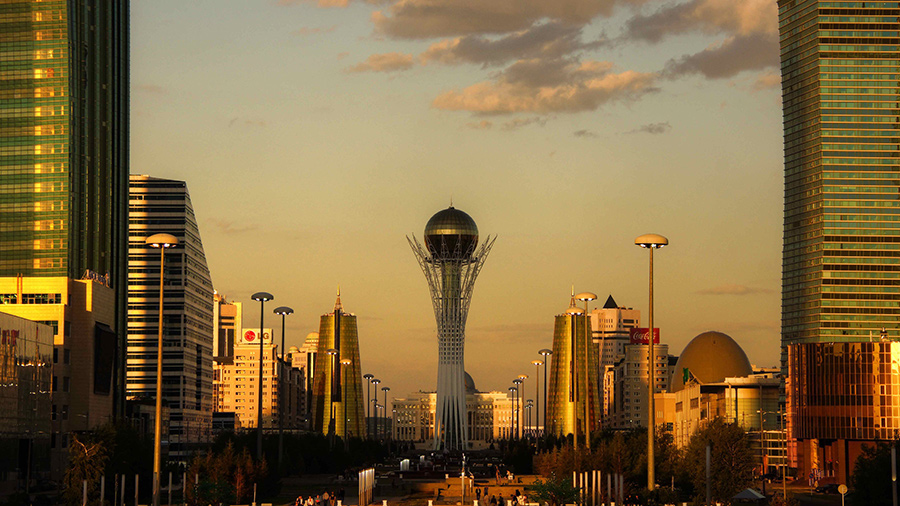 Rumour has it that the president himself sketched Bayterek Tower on a serviette.  (photo: Mariusz Kluzniak)

About the blogger: Sander Groen is an award-winning travel journalist with 14 years experience. He has circumnavigated the globe 15 times, visited 70 countries and produced hundreds of travel stories for Dutch and international newspapers and magazines. He is also a teacher at the School of Travel Journalism, curator of the Travel channel of digital news platform Blendle and editor-in-chief of De Reisjournalist, a platform for high-quality travel journalism. Follow him at sandergroen.nl

This article was written in cooperation with the School voor Reisjournalistiek.