Alicante offers a wide variety of highlights, literally and figuratively. Since 4 July, the popular Spanish beach city on the Costa Blanca is KLM’s new destination. Have a look at the city just as its former conquerors did – from above. 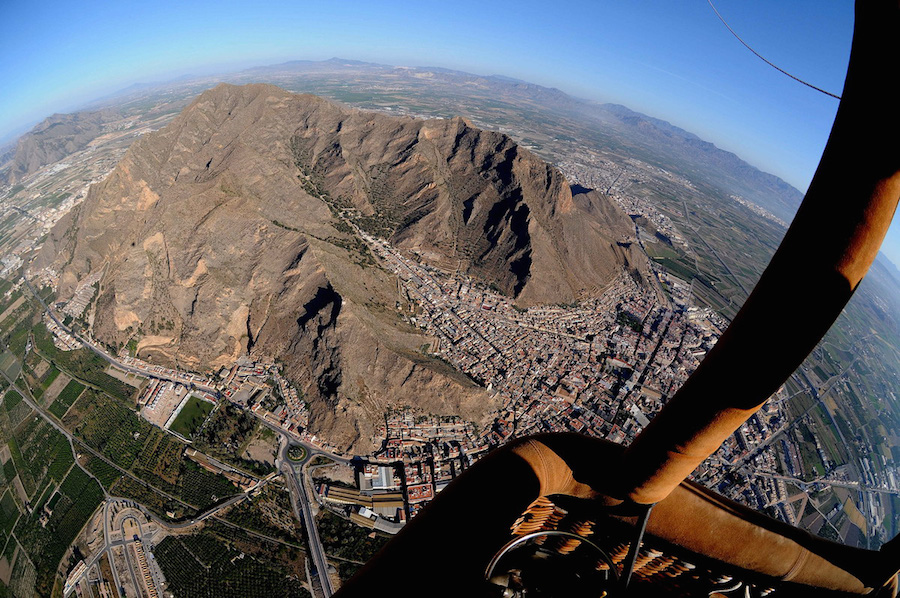 The Carthaginians called it Akra-Leuké (“White Cape”) while the Romans referred to it as Lucentum (“City of Light”). But the Moors gave it the name that stuck. Rewind to the year 711, the Moors conquered Alicante and built a proud fortress on Mount Benacantil, 166 metres above the city. Now fast-forward thirteen centuries.

This same Castillo de Santa Bárbara is, as we said, Alicate’s highlight – literally and figuratively. Now, however, it has been conquered by droves of tourists who come to stare in wonder at the panoramic view over the city, the sea and Spain. Follow in the footsteps of earlier explorers and conquerors and see the city as they did, from this great height — whether on your bike, from your bed, in a hot-air balloon, while dining, or walking to the top of Mount Benacantil. 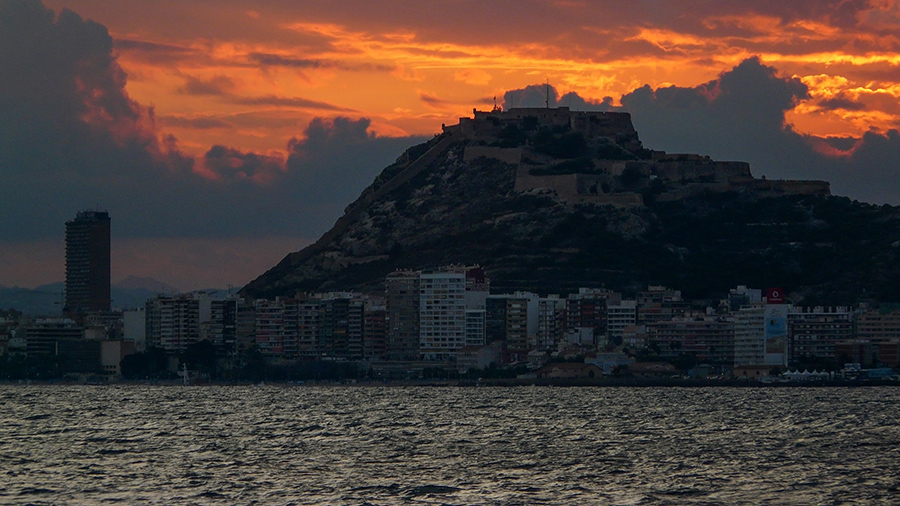 [tweet text=”Enjoy the panorama with the Spanish wind blowing through your hair.”]

The hilly hinterland behind Alicante lends itself perfectly for an active cycle ride. You can hire mountain bikes at Blue Bikes, including a guide or a map of the surroundings and then just take off – onto the paths and into the hills. The city centre is the starting point for a 22-kilometre ride to the mountain village of Busot. The bike ride entails an altitude gain of 500 metres. So, when you reach your destination, you’ll be treated to a beautiful view of Alicante and the province that bears its name.

Doable for cyclists of every level

The ride there is hard work at times, but it should be doable for cyclists of every level, just as long as you take regular rests – for instance, with a picnic at one of the lookout points. Set aside enough time during your ride for a visit to the Cuevas de Canelobre, limestone caves discovered by the Moors. The narrow passages in the warren of caves are lit to create a fairy-tale feeling. If you succeed in making the climb inland, you’ll be richly rewarded by an easy descent back, so you can enjoy the stunning panorama with the Spanish wind blowing through your hair. 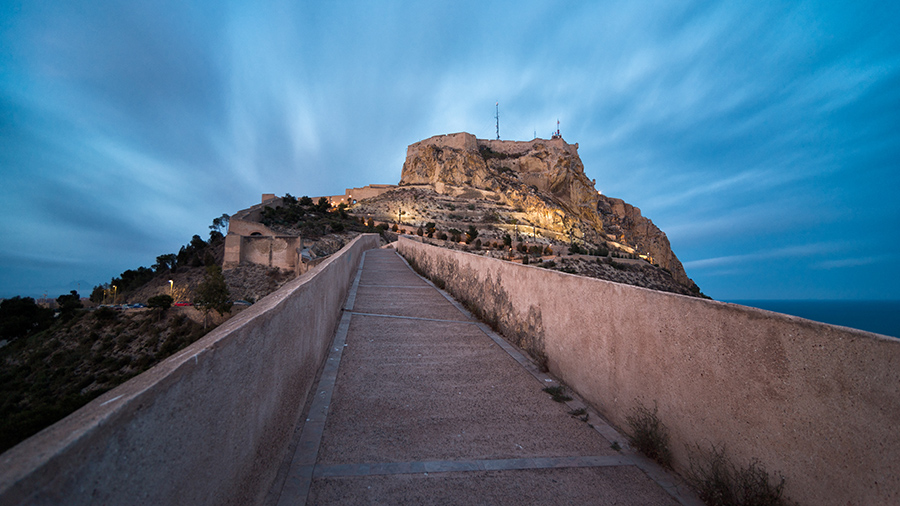 The lift from the Explanada will bring you to the castle. But it’s nicer to go on foot. (Photo: Jesus Alénda)

On foot to the castle

Next destination, at yet another level, is the Castillo de Santa Bárbara. It is one of Europe’s largest medieval castles, positioned prominently at the very top of Alicante, Mount Benacantil. For a few euros, the Explanada de España will take you to the top. But it’s much more fun to scale the mountain on foot. You’ll make your way through the winding alleyways and stair-step streets of the old, folkloric district of Santa Cruz to the Parque de Ereta and stop for lunch at the best restaurant in Alicante, La Ereta, complete with Michelin star but entirely affordable.

You can follow your climb along the tidy paths past prickly agaves while each step only makes the view over the sun-drenched beach city and the azure sea more spectacular. But the walk saves the best for last – the view from the castle. Even here, you can climb higher still. Take the stairs in the castle tower and you’ll feel just like a conquistador. 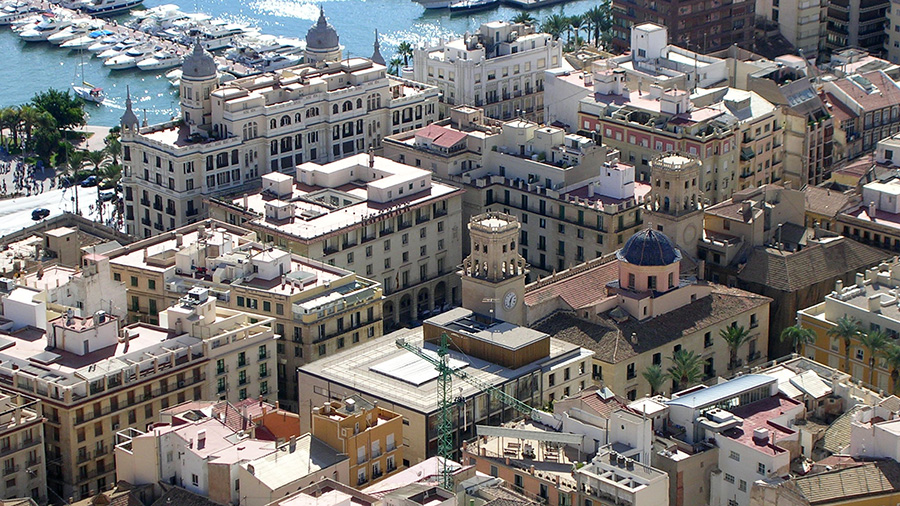 Visit the Castillo de Santa Bárbara and you’ll have Alicante at your feet.

[tweet text=”If the weather is clear, you can see the lights of Tabarca Island twinkling in the distance.”]

Sleep on the 30th floor

At 117 metres, the Estudiotel Alicante is the city’s tallest building. This skyscraper – built in true 1960s architecture – offers budget-friendly hotel rooms. If you book one of the three apartments on the 30th floor, you’ll pay twice the standard rate, but it’s worth it for the view. At 97 metres, Hotel Tryp Gran Sol is just slightly shorter. But, thanks to its colossal and colourful mosaic by Alicantino artist Manuel Baeza, it’s easily as prominent.

On the 26th storey, you’ll find the aptly named restaurant El Mirador (“The Lookout”). As you might expect in a Spanish middle-class hotel, the interior is dated, the service surly, and the food is mediocre, but this is outweighed by the compelling view from your table through the large windows and outside from the balcony. At the rear, you can look out over the old city and the castle – very nearly at the same height. At the front, you can view the harbour, the beach and the sea. Come before sunrise or after sunset and, if the weather is clear, you can see the lights of Tabarca Island twinkling in the distance. 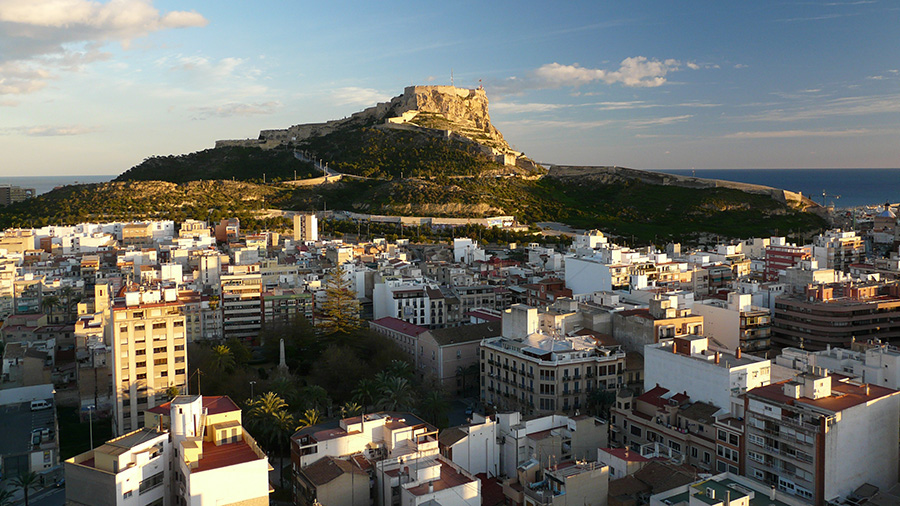 Alicante from a hot-air balloon

And, finally, an adventure that the explorers and conquistadores from days of old could not have imagined – a ride in a hot-air balloon. Flight routes make it illegal to fly above the city, but there’s much to see out over the province. Look out across the palm orchards around the city of Elche, the mountains inland, the lakes in the El Hondo Nature Reserve, and the beaches along the Costa Blanca to get a bird’s-eye view. With the help of companies such as Aeroglobo Spain, you can float silently – that is, until the pilot turns on the burner – over the landscape. This is the most beautiful image that you can get of Alicante, bar none. Willing to bet that the Carthaginians, Ancient Romans and Moors wouldn’t have been jealous? 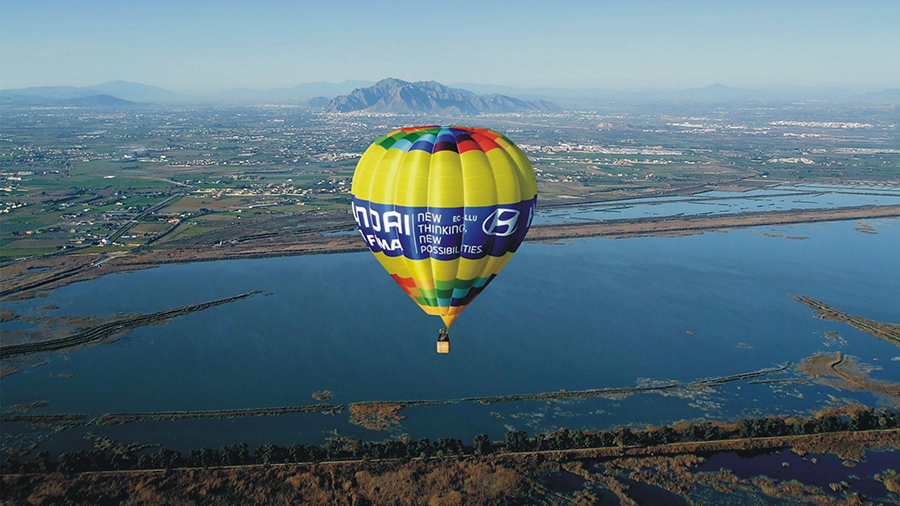 Go to new heights and view the province of Alicante from a hot-air balloon. (Photo: Aeroglobo)

Liv Krake (born 1989) graduated in Communication Studies at the University of Utrecht. As soon as she received her Bachelor’s degree, she went on her first long-distance trip to India and Nepal. Since then, all she wants to do is explore more of the world. See: expeditiekram.nl.

This article was made possible in part by the School of Travel Journalism: schoolvoorreisjournalistiek.nl (Dutch only).

What is your highlight in Alicante, literally or figuratively? Let us know in the comment area, below.