It was Tuesday, 28 September 1948, when a KLM Constellation airliner in the presence of the Chinese ambassador, departed from Amsterdam and headed for Shanghai via Batavia and Bangkok for the first time. Among the passengers on board were eight Spanish Jesuit priests and six Carmelite nuns, together with the mother superior, who were going to conduct missionary work in the south of China. 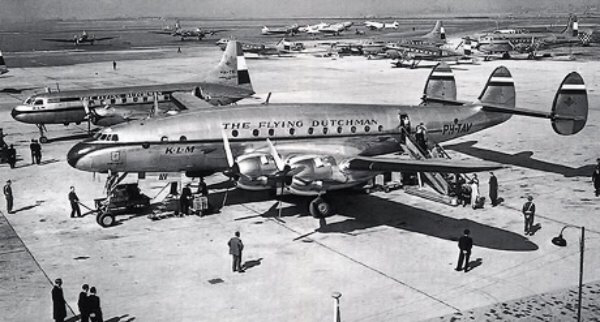 This flight 70 years ago made KLM the first European airline to connect Amsterdam and Europe with Shanghai and the Celestial Empire on a weekly basis. The American airline Northwest Airways (known today as Northwest Airlines) was already flying to Shanghai. KLM and Northwest Airlines decided 70 years ago to join forces and offer round-the-world tickets. At that time KLM was already pioneering by providing smart flight connections. The Shanghai-Amsterdam route connected, among others, to the KLM flight to New York, which was the most prominent flight destination at the time.

The weekly service on the Amsterdam-Batavia route flew via Cairo, Basra, Karachi, Calcutta and Bangkok, and made an additional stop in Singapore once a week. In Bangkok the passengers departing from Amsterdam transferred to a new Constellation Batavia-Shanghai liner. It took two and a half days to fly from Amsterdam to Shanghai, where before it took many weeks or even months by sea.

On 30 September 1948, Bangkok was a central hub where everything came together. Gerson van Messel (nicknamed “Fiets” – Dutch for “bike”), a highly-esteemed pilot of the KLM fleet, was in charge of the Constellation “Holland”. Under his lead the aircraft flew from the Kemajoran Airport in Batavia to Bangkok in five hours and twenty minutes. That same afternoon a total of three magnificent Constellations of the KLM fleet graced the airport in Bangkok. The Constellation “Holland”, the daily Amsterdam-Batavia machine that landed under command of pilot Parmentier, alongside the regular aircraft on the Batavia-Amsterdam route which flew via Singapore. 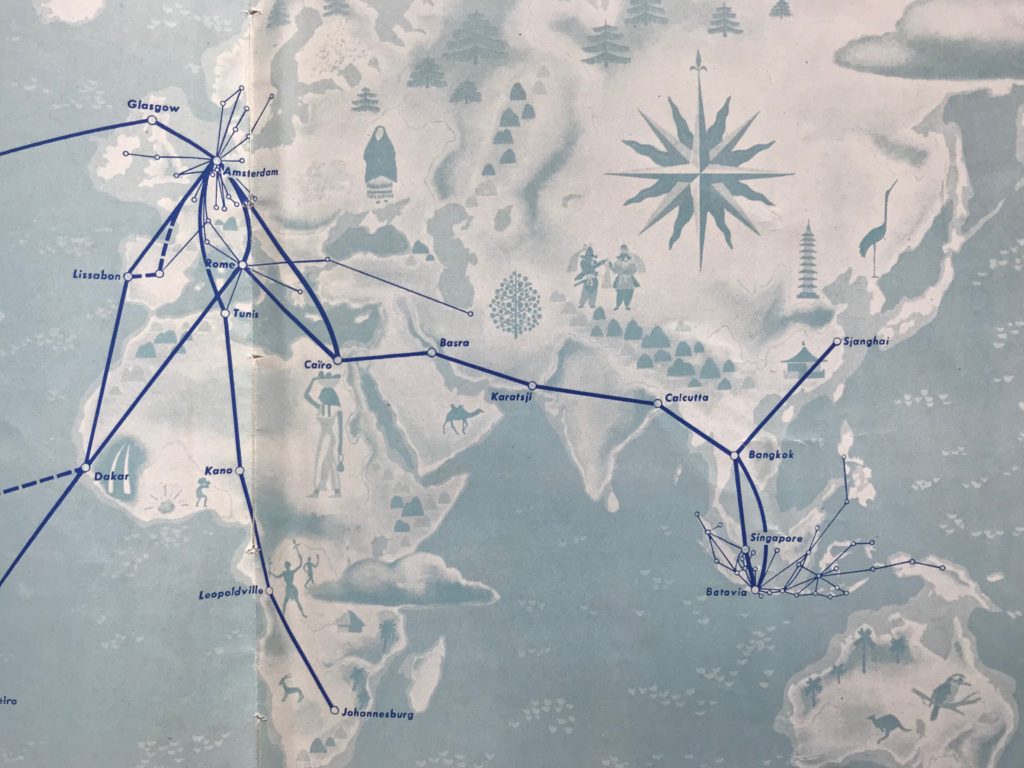 No longer in 80 days to go around the world, but only 7 days!

In 1873, the French writer Jules Verne published his book “Le Tour du Monde en quatre-vingt jours”. In his adventure novel, Verne described a contest to travel around the world in 80 days using any means of transport which were available at the time. Since then the novel has inspired many to undertake a travel around the world themselves. For example, in 1889 Nellie Bly set to complete the journey in 72 days on assignment for the “New York World” newspaper she worked for. The record was broken in 1903 by James Willis Sayre who managed to complete it in 54 days, 9 hours and 42 minutes.

However, thanks to the enterprising spirit of the Dutch, KLM was able to offer a connection to their flight to Shanghai – the Northwest Airways flight to New York via Tokyo. From there one was able take the KLM New York to Amsterdam flight. The collaboration made it possible to buy a round-the-world ticket for 1,700 US dollars and travel in only 7 days. That was exactly 75 years after the publication of “Around the World in 80 Days“. A new record in the books for KLM, together with Northwest Airways!

The passengers, the staff, various officials and journalists spend a short night in the Plaswijck hotel in Bangkok. Early in the morning on Friday, 1 October 1948, the Constellation “Holland” with the veterans Parmentier and Van Messel took off from Bangkok to Shanghai for the first time. As the chief-pilot of KLM, Parmentier took over as commander from Van Messel.

Celebrations upon arrival in Shanghai

Due to a strong headwind, Parmentier decided to pass over Canton (also known as Guangzhou, where the headquarters of KLM’s current partner China Southern Airlines are) and fly into Shanghai in a straight line. It had been agreed that the Constellation was to fly above Shanghai at 3 pm. In the days leading up to the flight KLM had placed the following advertisement in all Shanghai newspapers: “Look at the sky on Friday afternoon, 1 October, at 3 pm”.

And so, after covering a distance of 2,860 kilometres, eight hours after the take-off in Bangkok, Parmentier landed the first KLM aircraft precisely at the scheduled time at the Lunghwa Airport in Shanghai. With two red, white and blue flags hanging from the cockpit windows and amid loud crowd cheering of Dutch and Chinese spectators, Parmentier steered the Constellation in front of the airport building. The Celestial Empire had been reached in two and a half days from Amsterdam. The “Holland” had accomplished a victorious venture and made history by landing in Shanghai as the first European airline 70 years ago.

That same evening KLM hosted a reception for approximately 500 guests in the Cathay Mansions hotel in Shanghai. During his speech the mayor of Shanghai, K.C. Wu, confessed that in 1939 he needed 26 days to travel to Europe. He also expressed his gratitude to KLM for making it possible to reach Europe from Shanghai in two and a half days. 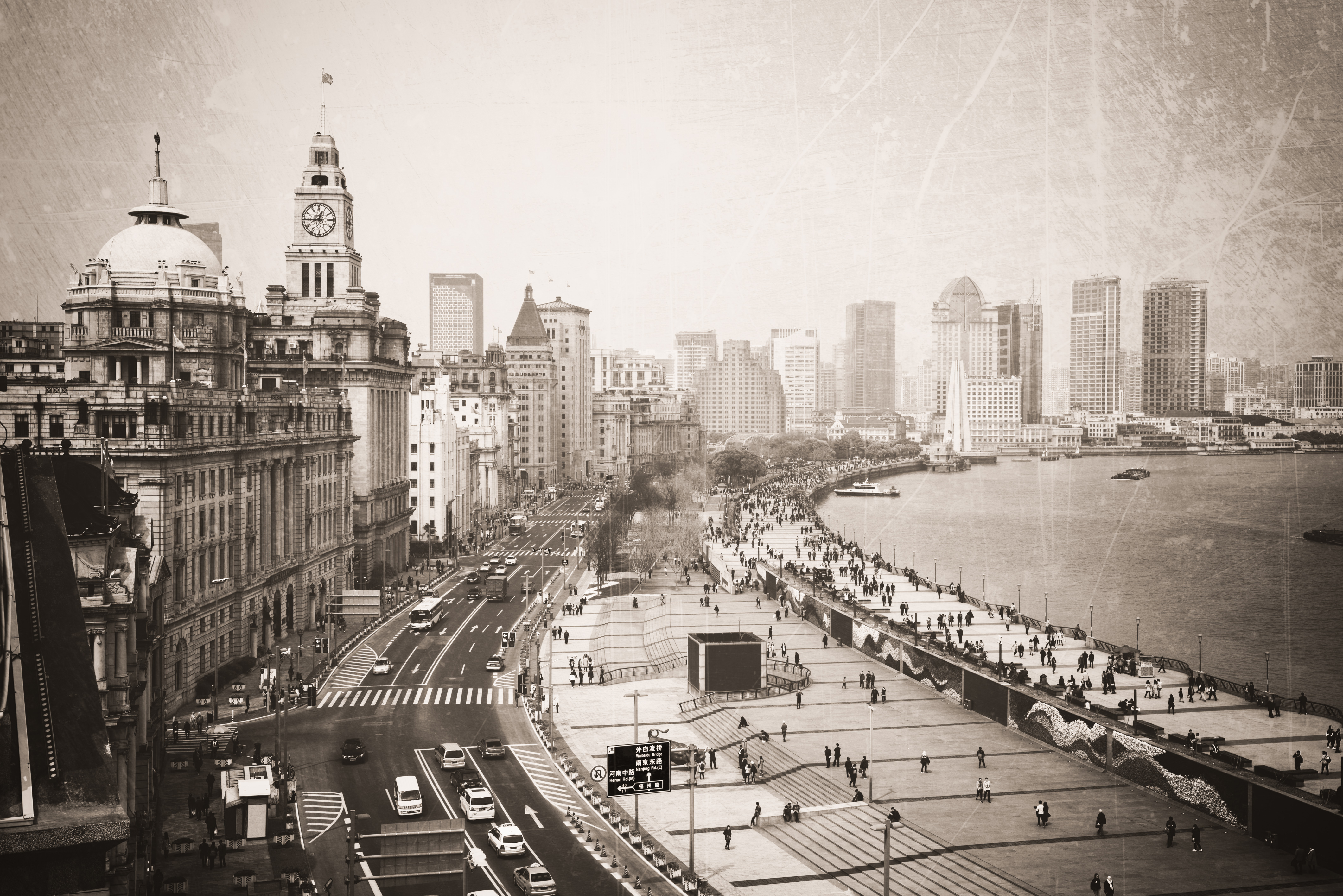 Return with a “stopover”

Sunday, 3 October, the return journey commenced, which went as smooth as the flight to Shanghai. An interesting fact: Parmentier and Van Messel decided to take a “simulated approach” and make a feint landing in Hong Kong. That’s because Hong Kong and the nearby Canton (Guangzhou) were to possibly be used for future stopovers on the 2,860 kilometre-long Bangkok-Shanghai route. The Hong Kong airport was not easily reached because of the mountainous terrain of the numerous surrounding islands. When the Constellation approached the airport, Parmentier dived as though in preparation for landing. At a height of about two metres above the runway he gave full throttle and took the four engines with their total capacity of 10,000 horsepower back into the air. It was quite an experience for everyone in the cabin and was made even more memorable with the opportunity to enjoy the most beautiful view of the British territory in the South China Sea.

In Bangkok the passengers from Shanghai were able to transfer to the regular Batavia-Amsterdam service, which arrived late in the evening on Tuesday, 5 October. Passengers going to New York could fly the following morning with a KLM connecting flight. 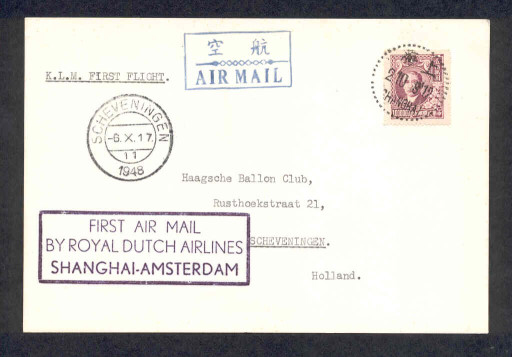 Unfortunately, the new fast service to Shanghai, also called the Orient Star, did not last very long. Because of the civil war in China it was unsafe to fly to Shanghai, and KLM cancelled the new service on 26 April 1949. Instead, the airline decided to fly to Canton in South China. But also in June 1949 it became too unsafe to fly there, and the new service to China came to an end.

After Beijing was again incorporated in the KLM network in 1996 and after resuming flights to Shanghai in 1999 (now possible in about 11 hours), KLM began a strategic alliance with China Southern Airlines in 2001 and extended its network to Chengdu, Hangzhou and Xiamen. In the meantime, KLM became partner in two joint ventures in China: with China Southern and Xiamen Airlines, and with China Eastern Airlines. Together, KLM and its partners in China and Taiwan carry approximately 1.6 million passengers every year between Amsterdam and Greater China. That puts Greater China firmly on the flight map, 70 years after KLM flew to Shanghai for the first time