Eighty-five years ago today, one of KLM’s most famous aircraft made history when it returned to Schiphol after winning the 1934 Melbourne Air Race. Thousands of enthusiastic spectators turned out to welcome the crew of the DC-2, named Uiver (Stork). The TV series Vliegende Hollanders (Flying Dutchmen) has reconstructed events from this race, which was so important to KLM. The problem is, this Uiver can no longer fly. Or couldn’t, until now…

At visual effects specialists Planet X, reality and fiction flow imperceptibly in and out of each other. Suddenly, the Uiver and other old aircraft – such as the Koolhoven, Farman and Spin – are flying through clouds once again. “We’ve pulled out all the stops. Spectators will really ask themselves whether what they’re seeing is real or not,” said company owner and Visual Effects Supervisor, Dennis Kleyn. The virtual effects were then demonstrated on a big screen. “Look, we can calculate the impact on the landing gear of taxiing across a bumpy field.” Chris Klinkhamer, the simulation expert at Planet X, then zipped through dozens of photos and films. “This is what happens to the landing gear in a crash”, Dennis explained. The debris shot across the screen, without a single aircraft part getting damaged, luckily.

Ronnie Olsthoorn, a digital modelmaker, has constructed 3D models of today’s Boeings and Airbuses’ illustrious predecessors. The models have been reconstructed with extreme precision, entirely digitally – quite a contrast to the life-sized models on the set. Dennis Kleyn: “Using the software program Houdini, we can unleash all kinds of mathematical calculations and laws of physics to achieve the desired animations.” A DC-2 flies across the screen, the visual effects artist gets the wings to shudder, the wheels to spin and the aircraft to come alive as it take to the air. “As you can see, every movement and calculation has to be entered manually,” Kleyn went on. “The cut from or to the model of the real Uiver has to be extremely precise too, of course.”

Planet X has spent more than a year working on the effects for the eight-part series Vliegende Hollanders about KLM’s first director, Albert Plesman (played by Dutch actor Daan Schuurmans), and aircraft manufacturer Anthony Fokker (Fedja van Huêt). Filming took place over the summer and autumn and preparations were put in place to ensure postproduction could start the moment filming finished. After seventy days of filming in the Netherlands and abroad, all the scenes have now been shot and are being edited. In a screening room at Planet X we were shown how real and virtual worlds are blended together. Actors standing in front of a green screen wave at thin air. “An aircraft will be inserted behind them later”, Kleyn explains. On another screen I got a view of the cockpit where the pilots – or rather, actors in a reconstructed cockpit perched atop scaffolding – are getting the aircraft to ascend.

According to the Vliegende Hollanders script, in 1934 KLM director Plesman spoke to the people aboard the Uiver at Mildenhall airfield in England:

“I hope you enjoy the flight and arrive quickly and safely in Australia!”
Captain Parmentier reassures his three passengers: “Don’t worry. This is the safest aircraft you could hope for.” He crosses himself. “For Queen Wilhelmina,” he says to his co-pilot Moll.
“And for Plesman,” Moll answers.
The Uiver accelerates and takes off for Australia.

We then moved to the Virtual Reality (VR) room to witness a relatively new invention: DeepSpace. Wearing a VR headset and a carrying a dummy camera it’s possible for one or two people to explore all kinds of camera angles and check the framing of a shot. They can also test whether the large camera will be able to make a particular turn in the small cockpit on set. Vliegende Hollanders‘ instigator, Jeroen Plesman, and his father, former pilot Jan Plesman, can’t believe their eyes when they try out the system. “It’s amazing what they can do,” exclaims Jan. “With my left and right hands I can point to parts of buildings at E.L.T.A., the first aviation exhibition held in Amsterdam. Everything my grandfather – KLM’s first director – saw, I can see too.” 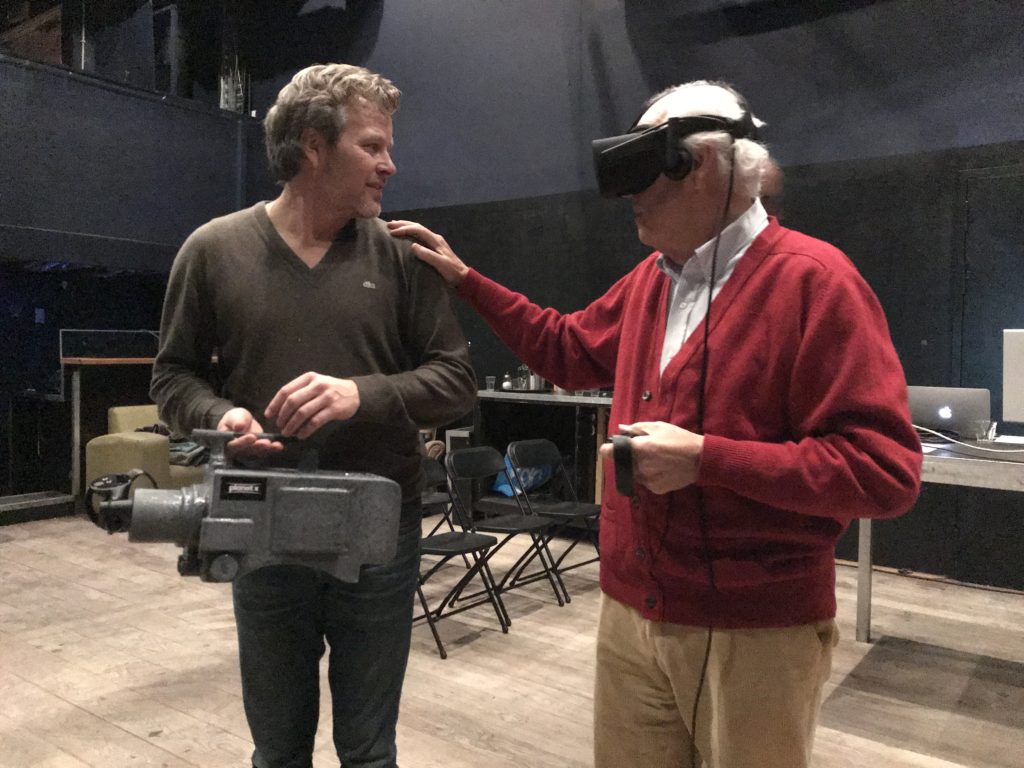 Several weeks earlier, Jan Plesman had been on the film set in Lelystad with several members of his family. “My grandchildren were walking around in 1930s costumes as extras beside the Uiver. It was fantastic!” This is the same DC-2, now owned by the aviation museum Aviodrome Lelystad, that Jan flew fifty years ago in 1984 in the reconstruction of the Melbourne Air Race. The original Uiver won the handicap class in the 1934 race, but was lost in a crash the following year. Jan recalled how his aircraft, “was towed from the airport to the racecourse next door where the Uiver had landed in the dark in 1934. Mud, old cars and an Uiver monument – what a wonderful atmosphere.” And so the memories of the Uiver flooded back.

Read all about the famous 1934 Melbourne Air Race here. If you’d like to see nostalgic images of the 1984 Uiver (in Dutch), click here. The 1984 Uiver is on display at the aviation museum Aviodrome Lelystad.

Flying Dutchmen is produced by Topkapi Films in collaboration with AVROTROS. The series will be broadcast autumn 2020 on NPO1.