When KLM operated its first flight in 1920, it used a De Havilland DH.16. The aeroplane had a large propeller just in front of the engine mounted on the nose. These days, aircraft get their thrust from jet engines under the wings. So, does that mean the aircraft nose has been demoted to a superfluous, hollow space..? Nope, far from! I decided to stick my nose into KLM Engineering and Maintenance’s business to find the answer to the question that has been occupying me for ages: What exactly is hidden in the nose of an aircraft?

I went to speak with KLM ground engineer Martijn Smorenburg. First, he informed me of the aircraft nose’s official name – the radome (radar + dome = radome). The radome is a spherical plastic cap that opens up and serves as the weatherproof housing for some important equipment – the radar antenna, sometimes called the dish antenna – a sensitive plate that transmits and receives radio waves. The nose is made of smart material that blocks external weather influences but allows electromagnetic radiation to pass through. 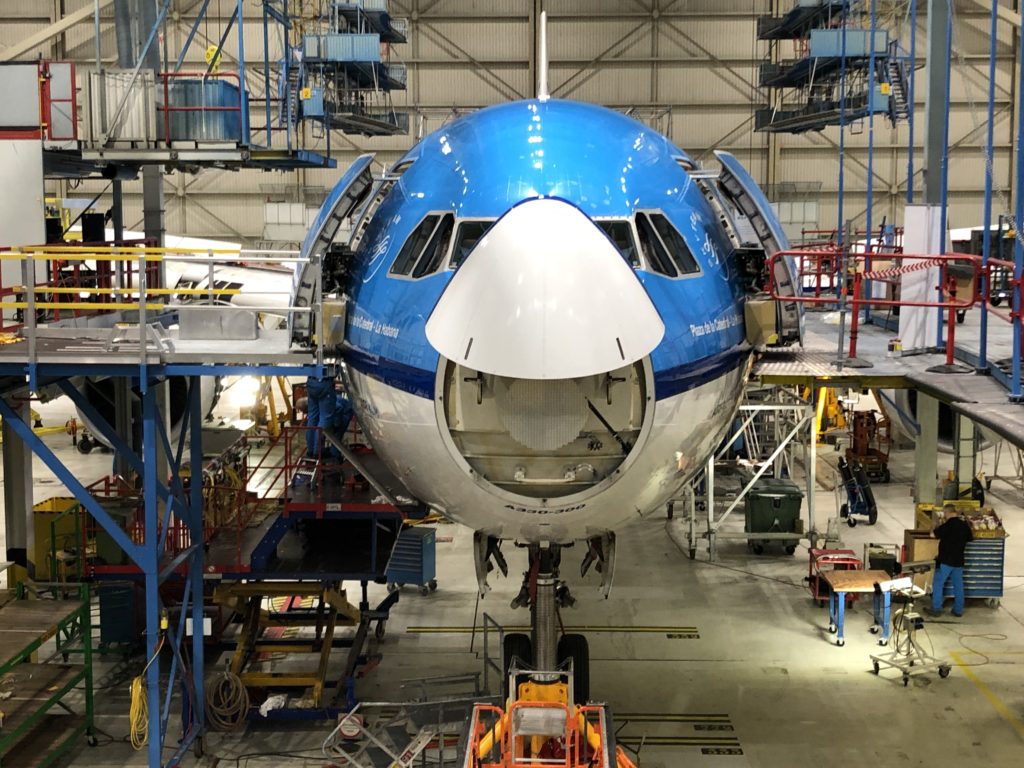 The opened radome of an Airbus A330.

The radar antenna’s most important functions are:

Then there is another antenna, called the localiser. It works in combination with the glide slope antenna (located under the A330 cockpit or near the B777 nose wheel) and the flight director signal, a kind of Satnav for pilots that indicates the flight plan. The localiser plots the ideal descent path for the aircraft. The onboard antennas make contact with antennas along the runway to determine the best possible landing position. The glide slope antenna looks at the aircraft altitude to prevent it from starting its descent too early or too late. The localiser looks at whether the aircraft is drifting sideways too much. Pretty useful! 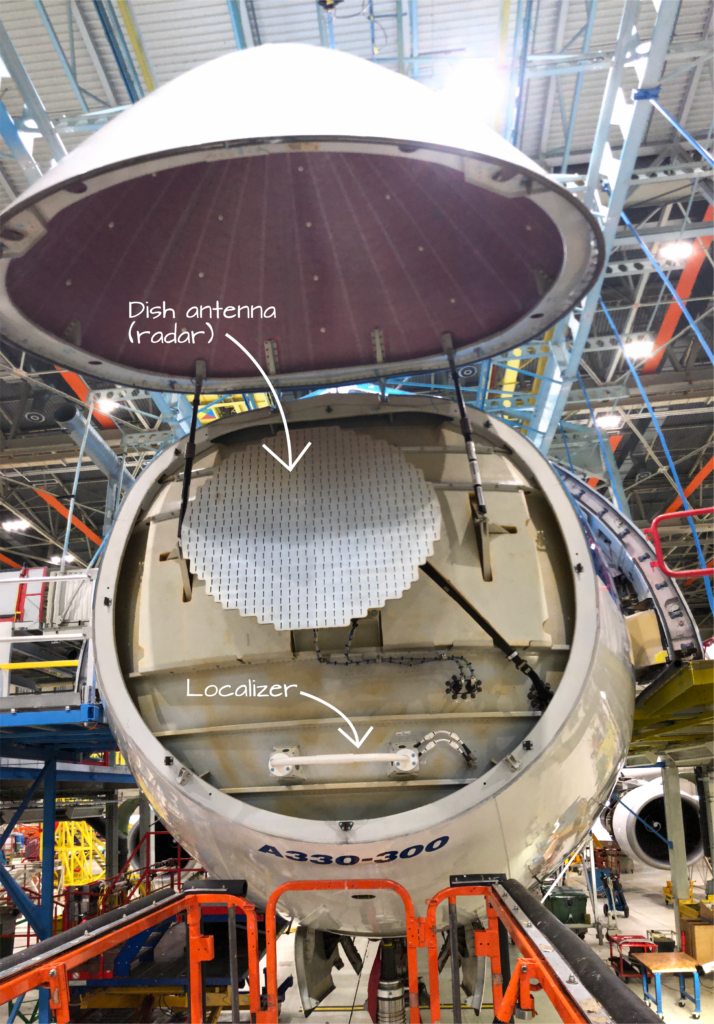 A few more facts about the nose of an aircraft: 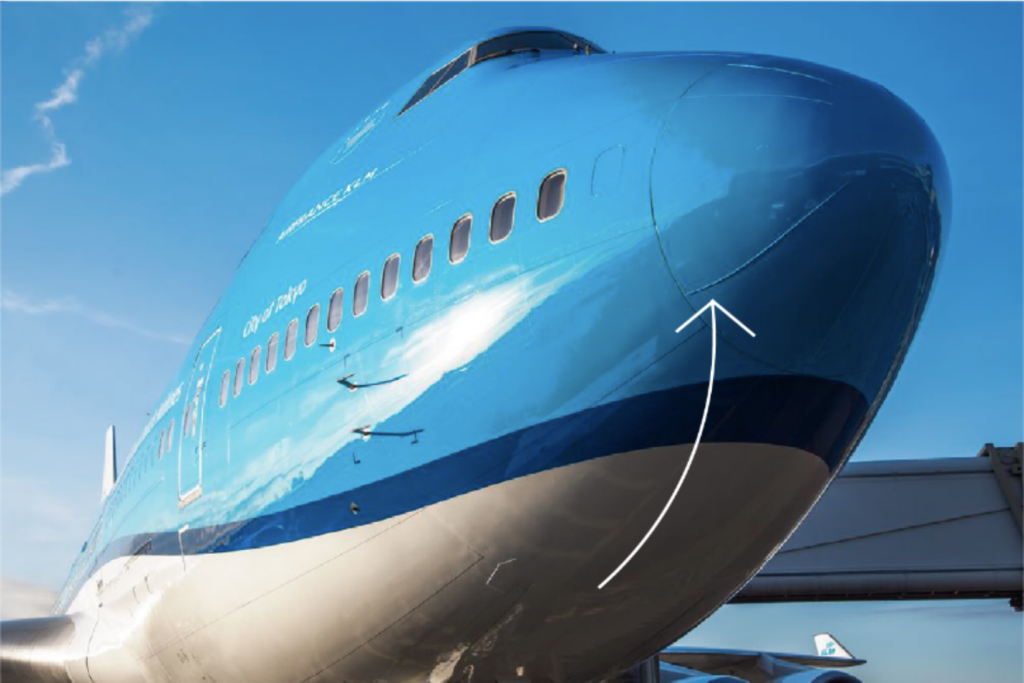 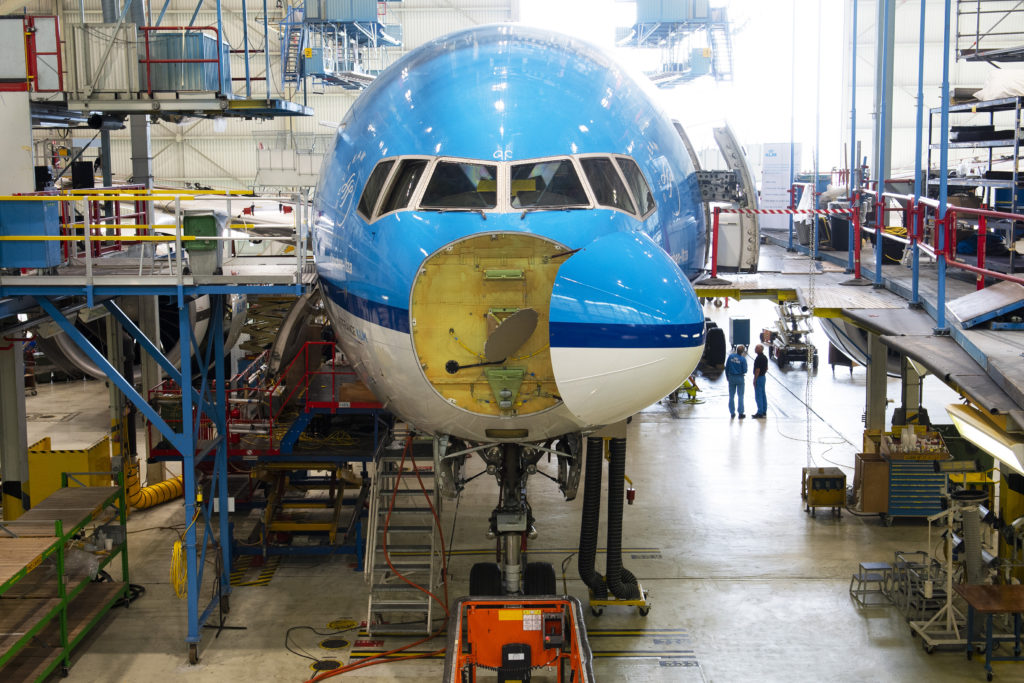 So next time you find yourself at the boarding gate and you see one of our big blue birds readying for departure, take a good look at that bright blue nose. There’s more to, or in it, it than you think!

Many thanks to KLM ground engineer Martijn Smorenburg.