Having seen the lightning and heard the thunder, it’s time to let the facts rain down upon you!

So what happens when lightning strikes an aircraft?

An aircraft is struck at an extremity (e.g. wingtip, cockpit or tail) and then leaves the aircraft via another extremity. That means the thunderbolt passes through a section of the aircraft’s fuselage. During a thunderstorm, negatively and positively charged particles engage in a sort of battle dance, so when an aircraft passes through this highly charged atmosphere, it works much like a lightning conductor. The video below shows a KLM Boeing 777-300 being struck by lightning. This unique footage is filmed by Ralph Valkenier of KLM Apron Services. He tells me this Triple-7 took off from the Polder Runway for flight KL743 to Lima, when it was struck below the cockpit on the left at an altitude of just under 2,000 feet (± 609 metres). The thunderbolt exited the aircraft via its left wing. This is how things normally go.

What do passengers experience? And pilots?

What do you actually notice inside the aircraft? The good news is that you notice next to nothing. There’s a flash and a bang, which can be quite loud at times, and then it’s over! I discussed this with Edgar Holthuis, the pilot flying the plane in the video: “In the 23 years I’ve been flying, this was the first time my aircraft was stuck by lightning. It was mid-November and we were on our way to Lima. As we were taking off, we saw a flash and heard a bang. We didn’t notice very much else.”

Pilots always report a lightning strike to the tower and/or to other aircraft in the area, primarily to warn other crews of the conditions, if the weather radar hasn’t done so already. The strike is also reported so that the aircraft can be inspected on the ground.

Edgar will never forget the experience. After the strike, he checked if all the systems were working properly. If that is the case, the flight continues, which is precisely what happened. “The aircraft was fully inspected in Lima. It’s amazing to see Ralph’s video, knowing that I was in that cockpit. It’s quite unique to capture this kind of footage. When my son’s friends saw the video, they asked if I was still alive. We had a good laugh.” 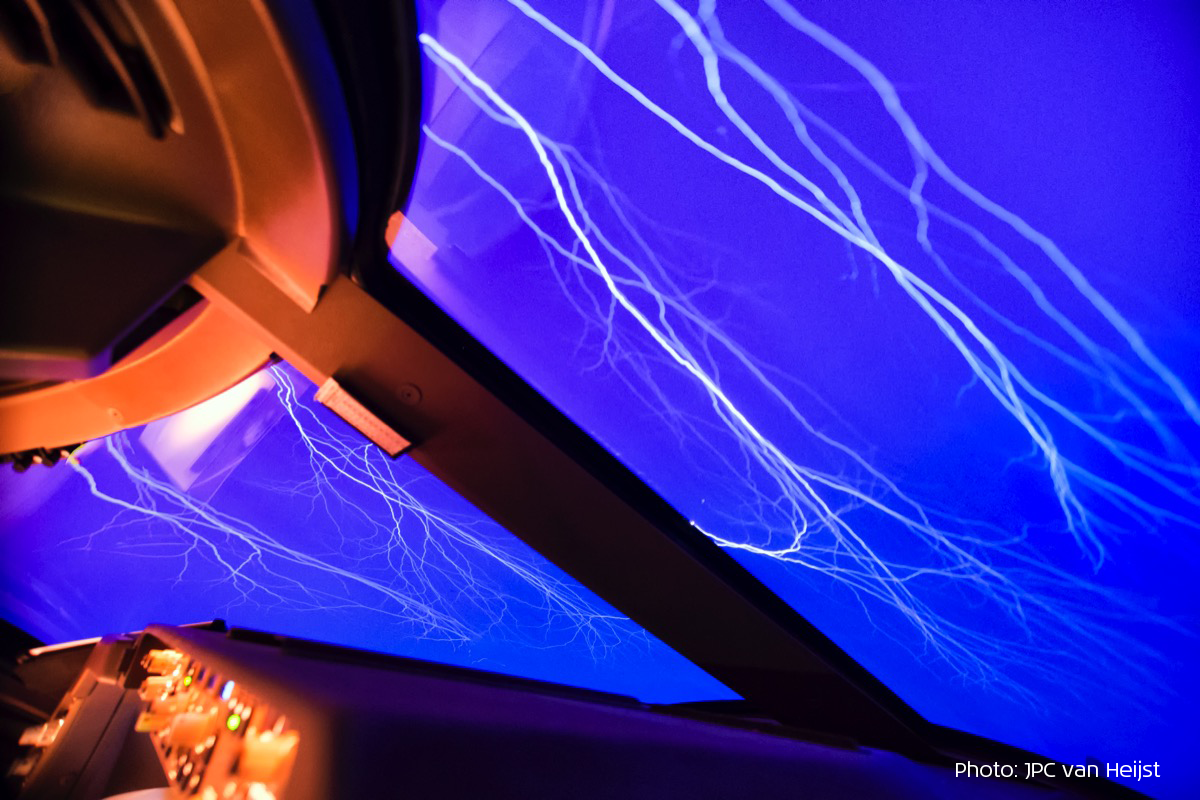 So, what exactly happens when lightning strikes? An aircraft conducts electricity in much the same way as a Faraday Cage. Static electric fields are unable to penetrate the cage. Older aircraft, particularly the Boeing 747 and 777, conduct electricity very easily, because they’re made of aluminium. Many new aircraft types, such as the Dreamliner, Embraers and A350s, are made of synthetic, lightweight, composite materials. These aircraft have an ultra-fine copper mesh that covers the composite components or a special type of aluminium paint that conducts electricity. This skin conducts electricity along the outside of the cabin, cargo compartments and fuel tanks. The lightning conductors on the wingtips ensure that the lightning exits the plane. This means the aircraft is part of the thunderbolt’s path to the ground, ensuring that passengers are always safe in the cabin.

It’s all over in a flash!

As a passenger, you don’t notice much, but it usually means a lot of work for ground staff. The protocol is that an aircraft must undergo a visual inspection by maintenance staff its next flight. A lightning strike can cause paint to flake off and leave singe marks on the rear edge of the wings and tail tips. Ground engineers inspect the entire plane to find the thunderbolt’s point of entry and exit. This can be quite a challenge, because the point of entry may be as tiny as a pencil tip!

Drones to the rescue

So how does one find these tiny marks on an aircraft? Andres de Vaan explains. He is the lead ground engineer and drone pilot at the Regional Jet Centre (RJC), which maintains the KLM Cityhopper fleet and other aircraft. During a routine inspection, the team inspects the entire 36 metres of the fuselage and the rest of the aircraft. “In 80% of cases, the aircraft is available for operation within 20 hours. It takes four hours in the hangar to fully assess damage to the aircraft.” Andres and his team are currently striving to make these checks faster and better. They’re using drones to achieve this. How cool is that!

“At the Regional Jet Centre, we’re working hard on innovations, such as drone inspections. In addition to routine inspections, we also regularly use a drone to fly over the aircraft. The camera is controlled using VR goggles. We compare the results and keep making all sorts of improvements.”

Drones can reduce inspection time by up to 80%. “Hopefully, we’ll be able to fly a drone to the gate in the future. At present, we’re only permitted to fly them inside the hangar. The drone can then find the damage autonomously and compile a report. We’ve already taken the first steps in this direction.” In addition to drones, Andres teamed up with the KLM Digital Studio to develop an iPad app that will allow damage to be visualised more rapidly using Augmented Reality. Bring on the future! 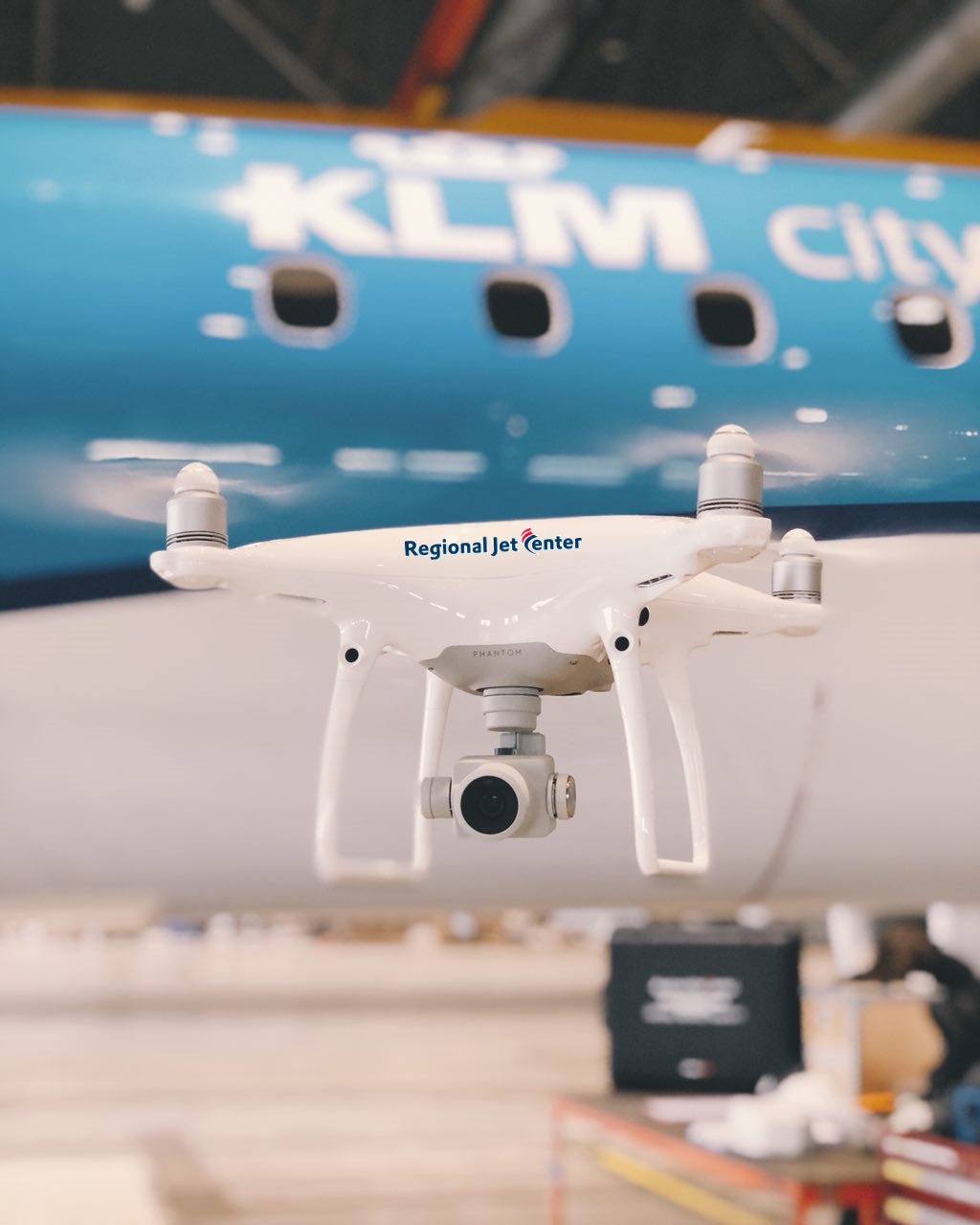 But what other features ensure that aircraft can fly safely in and around thunderstorms? Because an aircraft works like a Faraday cage, nothing can go wrong when lightning strikes. It’s the same as a car. If lightning strikes while you’re driving, you’re advised to park your car against a lamppost or another conductive object. In that way, the charge has a route to pass out of the car before you get out. Aircraft have so-called “static wigs” (thin metal wires behind the wings), which ensure that the accumulated charge caused by the lightning is released during the flight. Aircraft have all kinds of mechanisms to ensure that the 200,000 amps that pass through it don’t affect the electronics and systems. This is tested thoroughly before an aircraft is taken into operation. These tests simulate lightning strikes on the fuselage and internal components.

Did you know that there’s a better chance of filming an amazing lightning strike near Schiphol Airport? The reason for this is Aircraft Induced Lightning (AIL). Aircraft are much like a lightning conductors in that they form a bridge between the positively and negatively charged particles in a thunderstorm. Aircraft may even generate their own thunderbolt, especially in autumn and winter, when aircraft pass through relatively warm air from the North Sea that collides with cloudy, unstable, cold air inland. Thunderbolts may occur even when Towering Cumulus Clouds (TCU) and Cumulonimbus (CB) clouds wouldn’t normally generate any lightning themselves in such cold conditions (around -10°C). In 90% of cases, in fact, aircraft generate the lightning themselves.

Hopefully, this blog has answered all your questions about lightning strikes. It may even have eased some of your fears about lightning. Maybe you’re in the mood for some Thunder from Imagine Dragons?  You’re a lightning-pro now! You’ve got the power!

Want to see more videos of aircraft versus lightning?

P.S. Or you could watch Thor again. Or The Flash. Or Flash Gordon. Superheroes love lightning.