As you probably know, KLM is the oldest airline operating under its original name. Two years ago, in October 2009, KLM celebrated its 90th anniversary. To mark the occasion, 90 senior citizens were invited to take a flight. They came from across the country and, with an average age of 77, all had never flown in an aeroplane ever before! The oldest passenger on that flight was a 99-year-old lady. And she loved it!

Flying is an exceptional experience. It is the case today, and was even more so in times gone by. Then the number of passengers travelling was considerably less, and comfort was definitely different from what passengers are used to right now. Airplanes were smaller and there were fewer seats.

We’ve found some interesting pictures from the 1920s and 1930s that we would like to share with you: 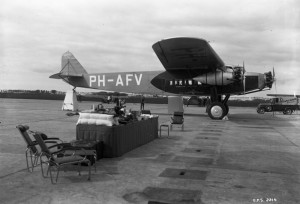 The F.XII waiting on the platform 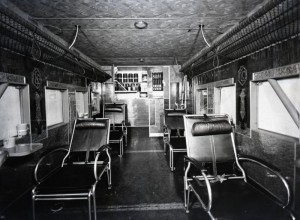 The interior of the F.XII with the so-called tube chairs 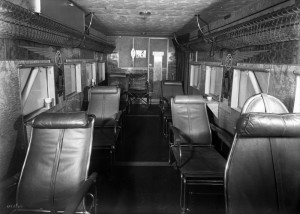 The seats in the aircraft came complete with footrest, safety belts and two suitcases to be placed under and behind the seat. KLM still has a few samples of these cases.

The seats were attached to the floor and were equipped with adjustable backrests and pillows.

With the design of these seats, KLM took a different approach to most airlines at that time. KLM was in favour of a modernist approach and furnished the cabin in an open and functional way. By using lightweight material more cargo could be loaded and the flight range extended.