It’s a very special occasion, because today is the day 60 kids will be going on a sightseeing trip over the Netherlands in a KLM Boeing 737. They’ll be flying so low they can see the rides at their favourite theme park and can almost touch the Euromast in Rotterdam.

But what makes this flight carrying children so special? Yes, there are children aboard most KLM flights, but flying certainly isn’t an everyday affair for this group of kids. Organised in cooperation with Stichting Hoogvliegers (High-Flyers Foundation), this flight is an outing for children who are chronically ill or disabled, many of whom have never seen the inside of a plane, let alone flown in one.

But today is about leaving all those troubles behind. Today is about fun and laughter, enjoying the day together. And what makes it all the more special is that 9-year-old Fay will be capturing the whole trip on camera, as a junior KLM vlogger.

Fay has a hearing impairment. Until recently, she couldn’t hear a clock ticking or birds singing. All that changed two years ago, when she got a surgically implanted hearing aid. “What’s that sound, Mommy?” she asked, when she heard rain hitting the windscreen on the way home from hospital. Since then, Fay has discovered a new world. A world full of new sounds.

Last year, Fay was told that she has Diabetes Type 1, which means she needs four insulin injections a day and needs to check her insulin levels eight times a day. That’s not the kind of thing a nine-year-old child should be worrying about. But Fay isn’t the type to worry and she certainly doesn’t want anyone’s pity, as she says herself. Fay goes to an ordinary primary school, where she is supported by a sign-language interpreter. She also does various sports and loves chatting with her classmates.

Fay is also a real pro when it comes to chatting to the camera: “Hiiii, I’m Fay and I’ll be vlogging for KLM today.” Fay’s best friend Jayden is also on the flight. Jayden also has a hearing impairment. They’ve known each other since they were babies and they’ve been close friends ever since. “But I won’t be marrying him…” says Fay. They’re all smiles on the way to Schiphol in the bus, chatting to each other in rosy-cheeked excitement. “Look, that’s where we’ll be just now!” says Fay, pointing at a KLM aircraft.

Wearing her special name tag, “Fay – KLM Vlogger”, she makes her way to the check-in desk. Despite the bravado, she looks a little nervous. It’s not an easy task: flying and vlogging all in one day. Once all the kids have received a special Hoogvliegers t-shirt, a rainbow cap and a cuddle from Bluey (a highlight in itself!) they proudly make their way to gate. After a high-five with the pilot, it’s time to board the plane. Bluey gets a big cheer as they wave goodbye and prepare for take-off.

For a full report of what happened during the flight, watch the video below and see how Fay and her high-flying friends enjoyed the day.

After the flight, the kids are rosy-cheeked with excited exhaustion. Wow, what a big day it was! But all will be returning home with wonderful memories. As the pilot said at the end of the flight: “That was an unforgettable flight!”

Thank you, Fay, you’re a star!

KLM fully compensated for all CO2 emissions from the 2019 Hoogvliegers flight. 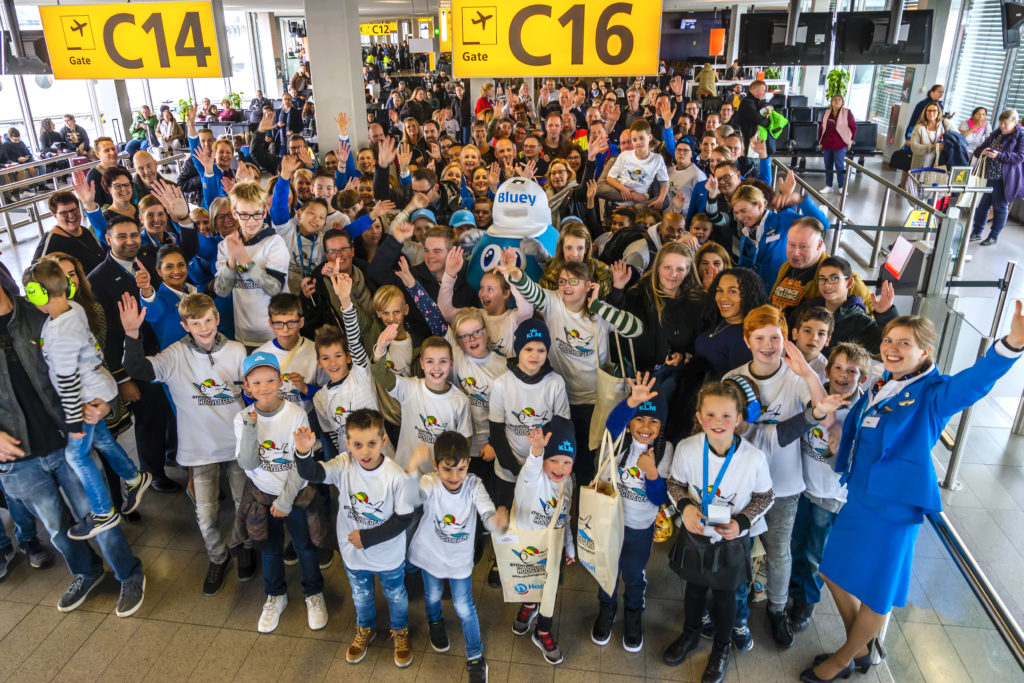