Have you seen it yet? Our totally awesome orange aircraft? Just for once, the characteristic KLM-blue makes way for orange – at least in part.  Why? Because our social media fans wanted it so badly ;) I’ll tell you how we painted the aircraft and how our usually blue and white appearance was given a significant dash of orange.

On King’s Day 2015 we uploaded a picture of an orange KLM aircraft on Facebook with the question: “Should we colour orange next year?” The response was overwhelming and in simple English the answer was: “Yes!” So, here we are. 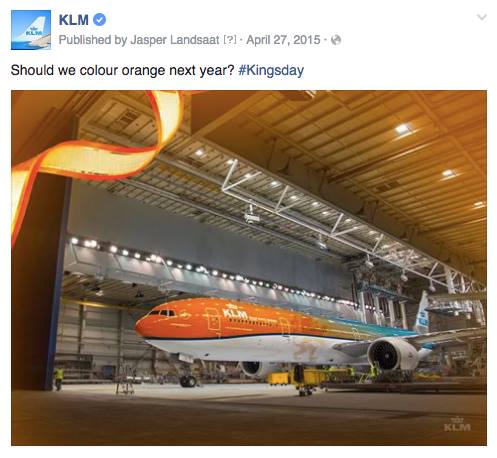 How do you paint a plane?

The Boeing 777-300 PH-BVA is brought into the hangar. Hangar 14, also known as the Painting Bay. It’s striking to note that the windscreen wipers are removed first. Apparently, orange windscreen wipers are not in the cards ;)
Because it was re-sprayed in 2015, it isn’t necessary to paint the aircraft entirely. The nose, the ‘band’ around the aircraft and just over half the body are sprayed in a new color.

[tweet text=”The sanding of a plane is done totally by hand.”]

Much like any paint job, it all starts with sanding. The sanding is done by hand. The abrasive pads cover an area of roughly 35 cm2. So it’s really specialised work.

After being sanded, the aircraft is washed and the windows and belly of the aircraft are covered to protect the existing paint layer. The wings, tyres and engines are also covered completely so that they retain their original colour. This is done meticulously – even Father Christmas would be impressed by the packing technique. 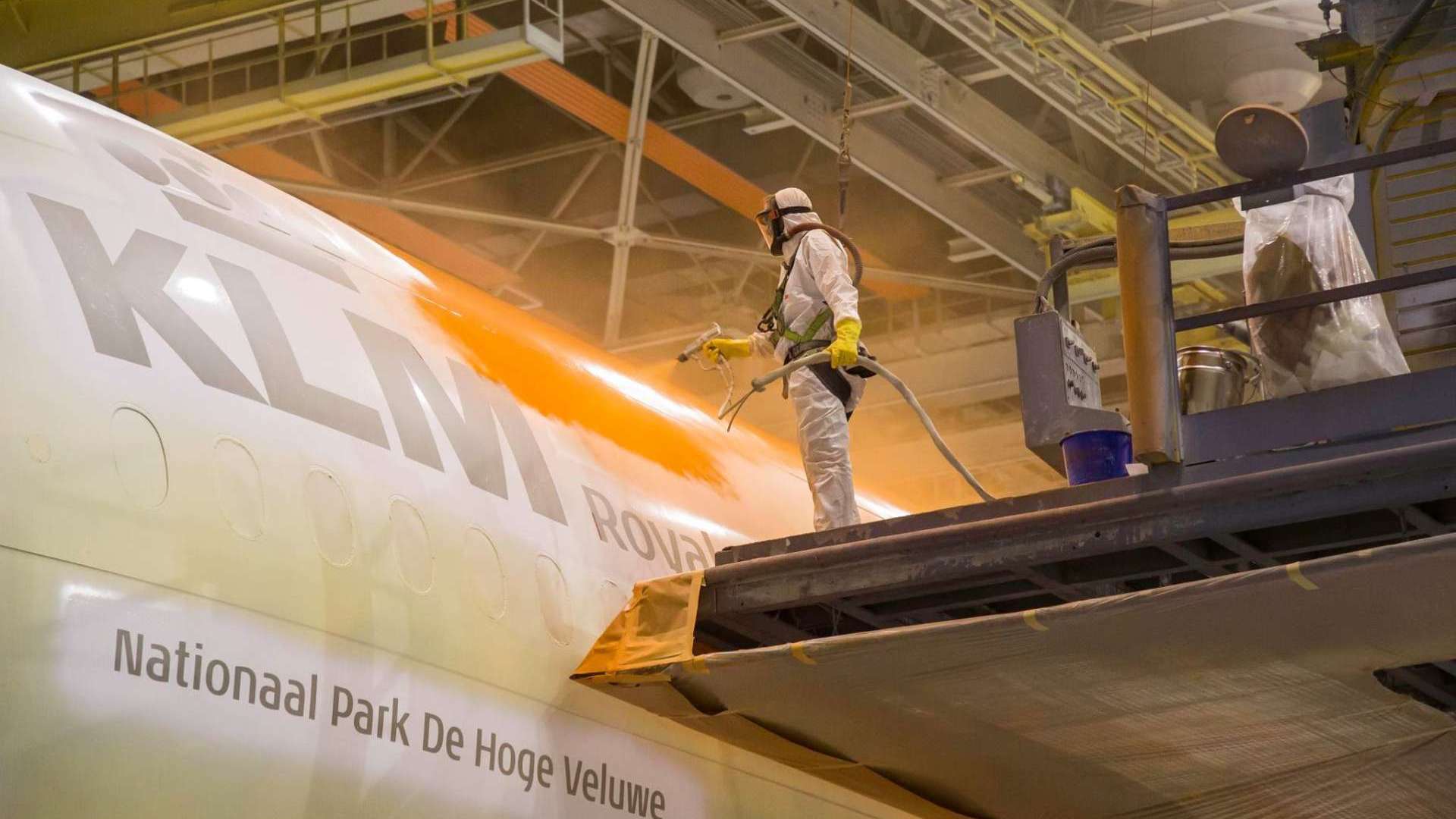 The painting process starts at the back with the ‘band’ in the colours of the Dutch national flag. Then there’s the gradient of light blue to orange, ending at the front with the orange section. The gradient is the area where the orange fades into light blue. You can see exactly what I mean in the photo below. 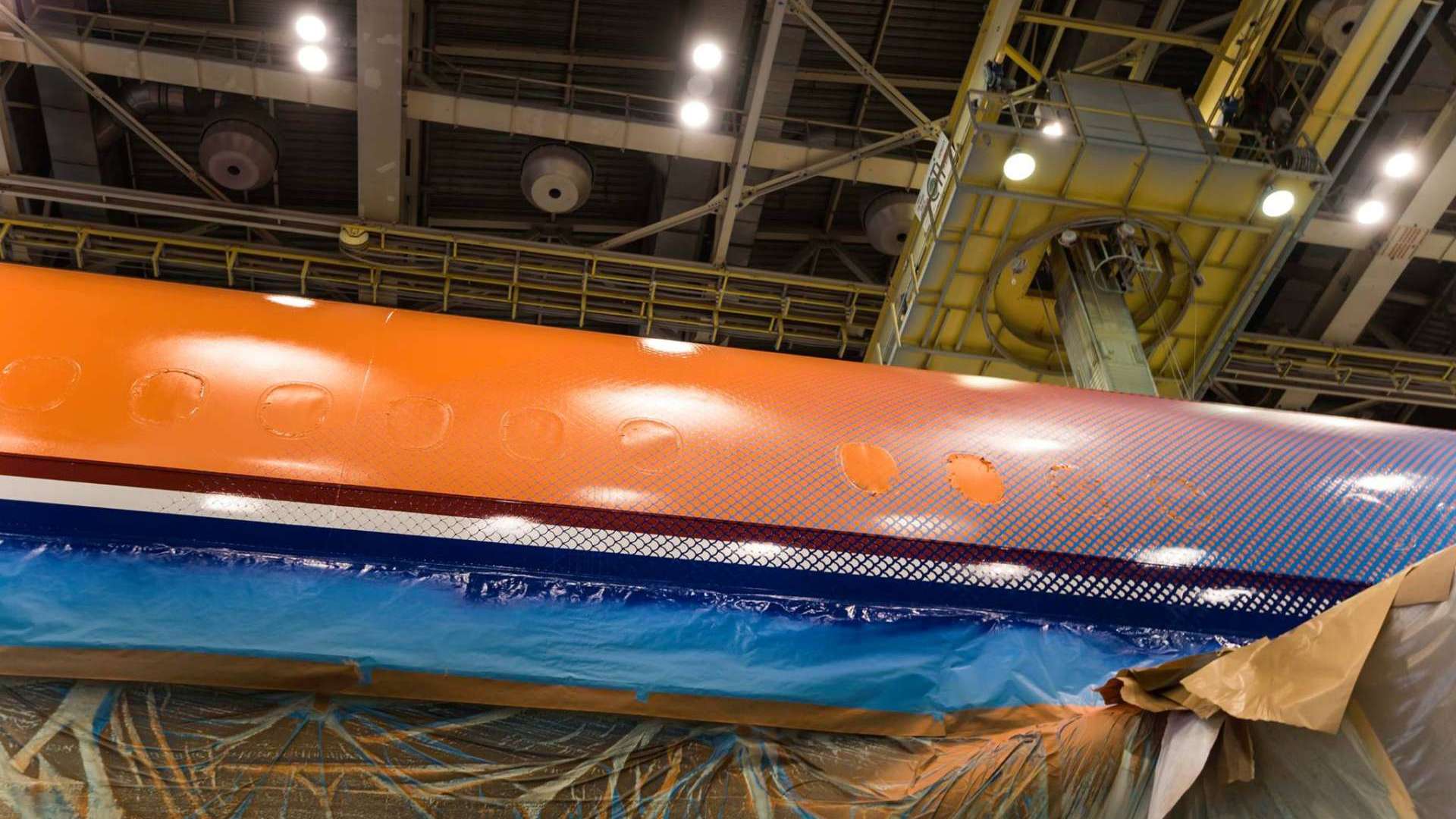 [tweet text=”The spraying process is carried out electrostatically, with the paint being drawn to the aircraft.”]

The spraying process is carried out electrostatically, with the paint being drawn to the aircraft. After the aircraft is completely sprayed, the paint job is touched up by hand. The entire aircraft is checked with a brush to perfect any uneven areas or mistakes. This is an incredibly time-consuming and intensive process. 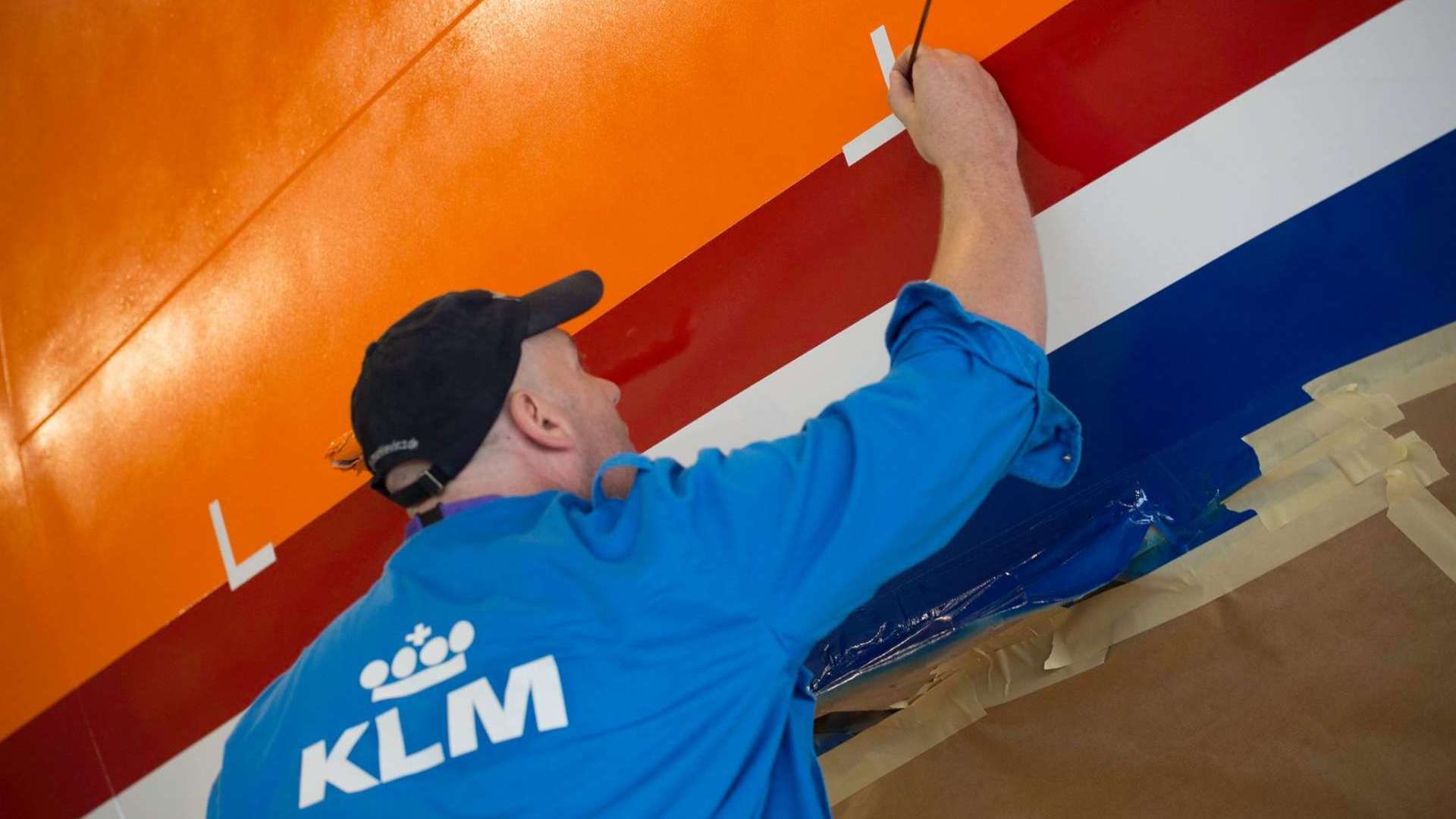 Finally, the aircraft is covered in a layer of clear coat with sparkles, making it glow in the sunshine. Shimmer and shine! When the Boeing 777-300 is sprayed with transparent clear coat the job is finished.

The aircraft is unpacked and leaves the hangar for some fresh air. A maintenance flight is carried out before the aircraft is taken back into service worldwide. Not to make sure the paint sticks, but to check that all the other components are functioning properly. The first flight was a roundtrip to Stavanger on 15 June 2016. 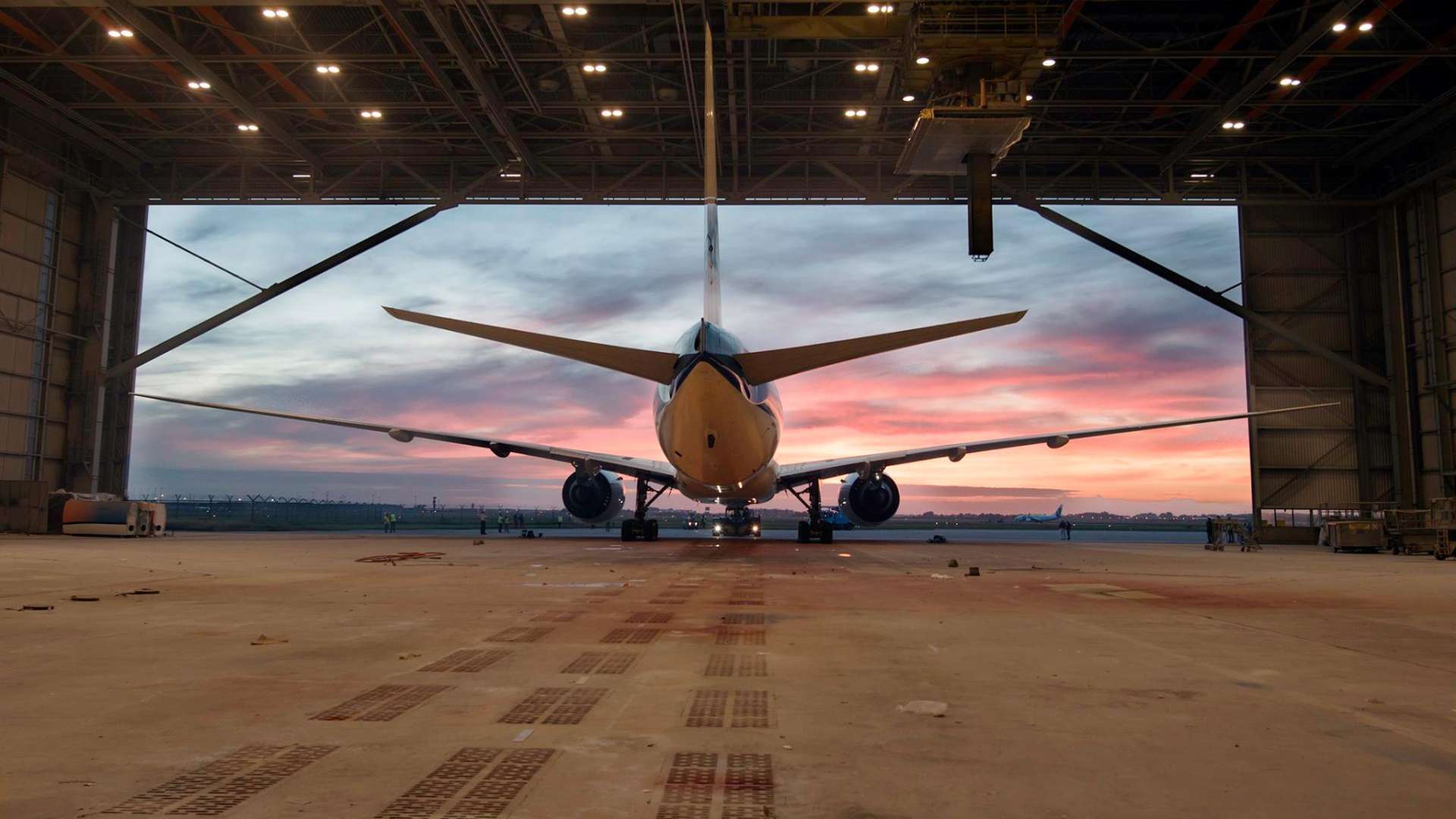 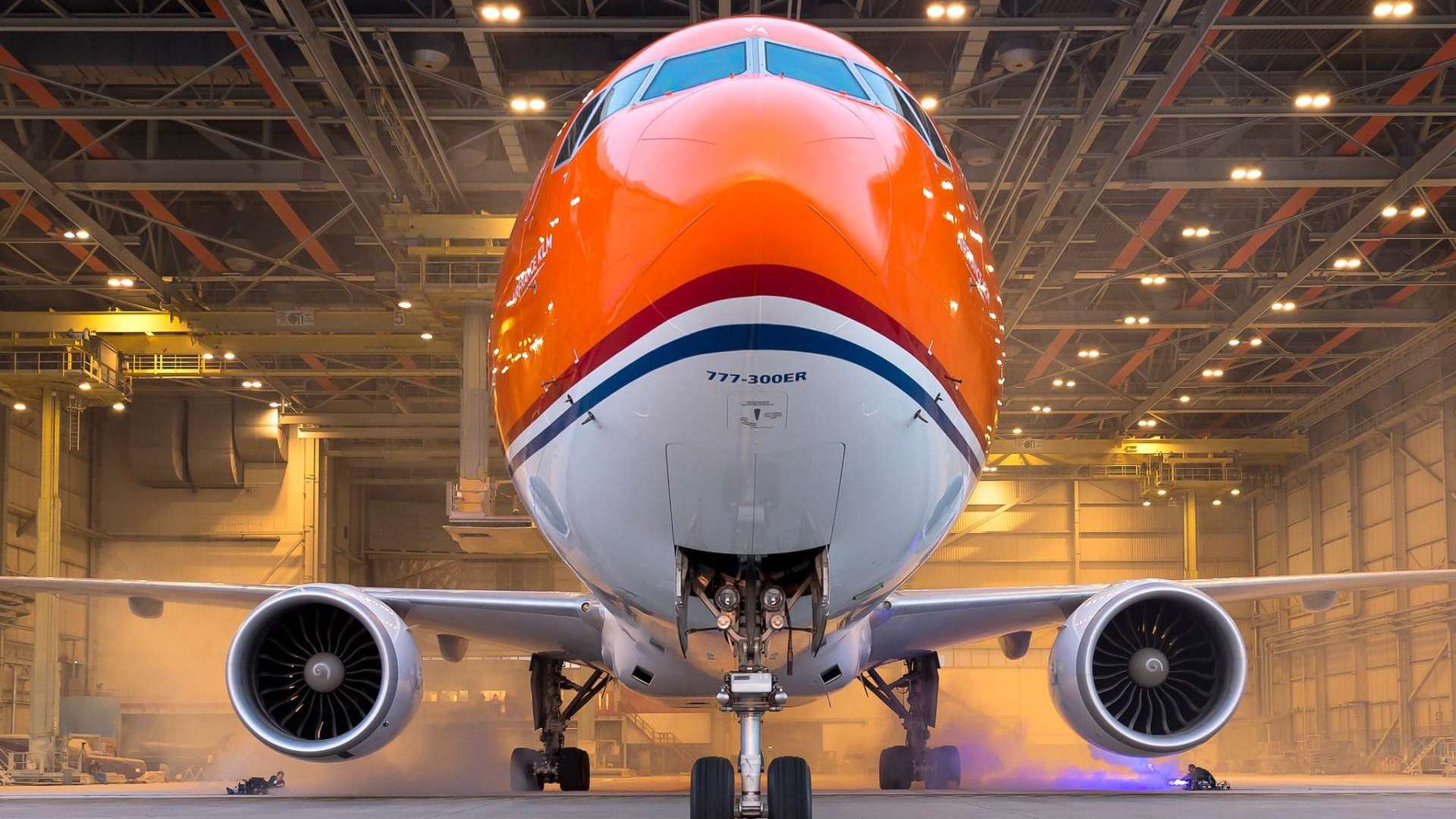 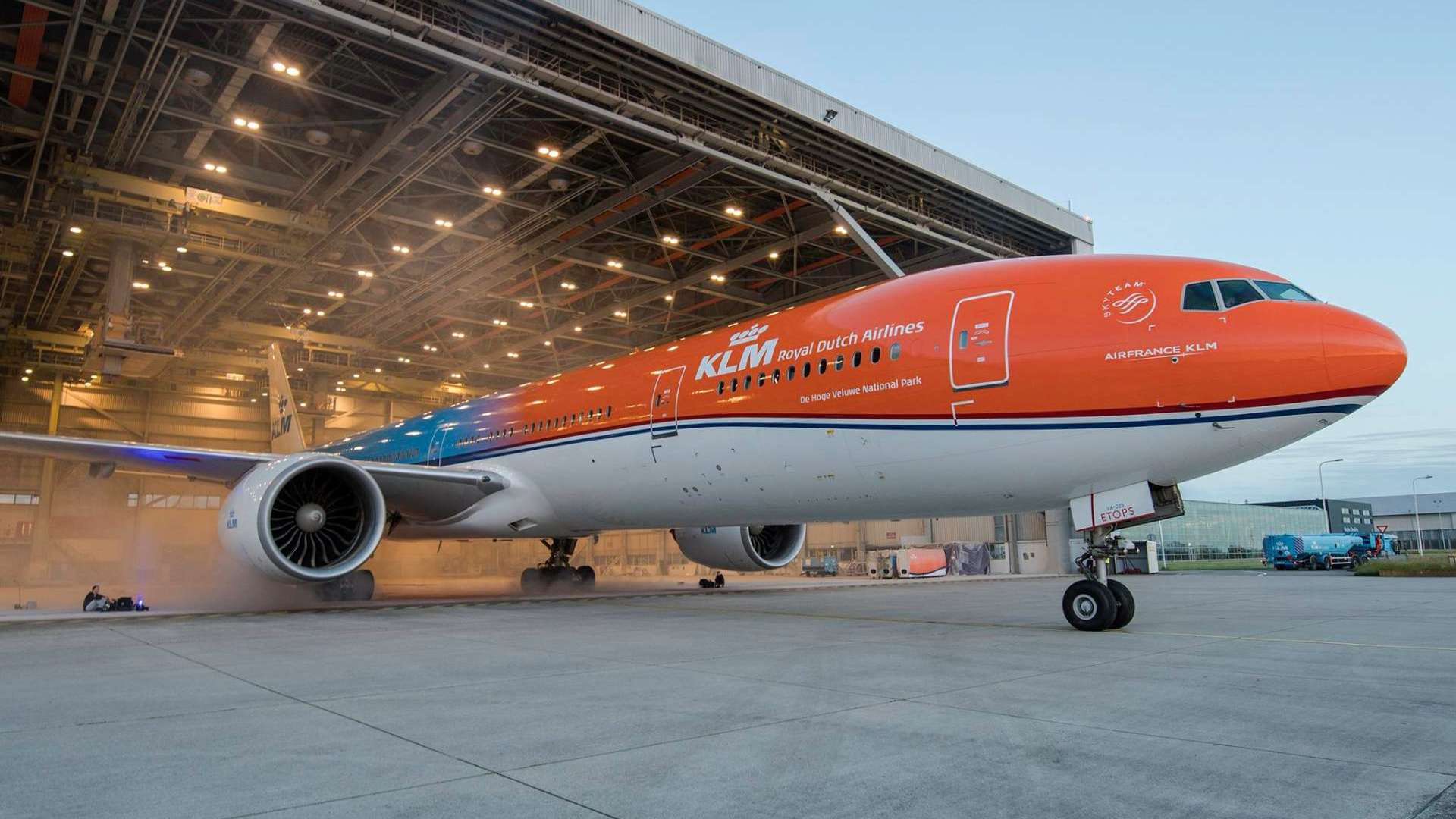