I once went to a beach in Denmark. Expecting merry umbrellas flapping in the soft sand, I found instead a rock-hard strip of land occupied by a long row of cars parked side by side, with Danish families sheltering between them on folding chairs, apparently unaware that they looked like extras in some surrealistic outdoor play. It was hot, but no one was swimming and we soon discovered why: the water was freezing and infested with jellyfish. I discovered the latter by accident when I tried to scoop one up out of the shallows, thinking it was a plastic bag.

In short, Denmark can be rather bizarre, even for someone from Amsterdam. But Portland, Oregon, is weirder still, says Danish novelist Peter H. Fogtdal, who has lived and worked in the city for several years, and regularly shares his observations on his hilarious blog.

“On one of my first days in town, I saw a sticker: Keep Portland Weird. ‘What a great slogan,’ I thought. Within a few months, I found out it was true. Portland is weird. It’s edgy the same way an age-challenged hippie is edgy. Portland even has something as un-American as bike paths.”

The city organizes a naked bike tour every year, but what Peter finds weirdest about Portland is how polite everybody is. “It’s the kind of city where people will apologize if you kick them in the groin. PDX is a far cry from New York and Chicago where folks are more than happy to maim you. Here, people are generous in traffic, they smile at you to the point of insanity, so this is a great place to take advantage of strangers.” 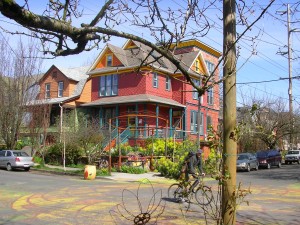 Peter’s favourite part of town: the Belmont district of Portland

But it’s also a city of rebels, left-wingers and organic farmers, says Peter. “George Bush the Elder called it ‘Little Beirut’ – you can’t get a much bigger compliment than that. And it’s a city that reads. What more can you ask for if you’re into weird and rebellious?”

Peter is lyrical about Powell’s bookstore, which covers an entire city block in downtown Portland. “It’s a fantastic but dangerous place,” says Peter. “You walk in thinking you’ll buy a Paolo Coelho paperback and you come out with a truckload of books by Dostoevsky. Powell’s even has a Danish and a Dutch section, where we can buy books in our own ugly languages. And best of all, you can take any book and bring it down to the cafe and read it for free, if you’re a cheapskate.”

But surely it’s not all just books and smiles and naked cyclists munching organic fruit? There must be a downside. “The weather,” says Peter. “It’s a soft-core version of Denmark and Holland. Lots of rain, except in July, August, and September. But Seattle is even worse, which makes us all feel a little better.”

Is that why Portland is called the Rose City? Because the plentiful rain is good for growing things? “It’s actually a ridiculous name,” says Peter. “The city only has one rose garden, that it’s very proud of. So it’s a bit like Utrecht buying twelve alligators and calling itself The City Of Crocodiles.”

Because I didn’t want Peter leaving town in tar and feathers on his bike, I decided to help him keep Portland weird by asking where he would go to kiss someone for the first time. “I recommend Washington Park overlooking the city and our two snow-capped volcanoes in the distance. Or the strikingly beautiful Colombia Gorge, just 45 minutes away, where you find small waterfalls, hiking trails, and the odd bobcat. For city people, I recommend the hippie cafes, where I love inhaling my herb tea and eating tofu sandwiches with organic bean sprouts until I fart.”

Peter has clearly embraced the weirdness of Portland. And he definitely isn’t the first. Country-and-Western legend Loretta Lynn once sang: “Portland, Oregon, and sloe-gin fizz // if that ain’t love, tell me what is // I lost my heart, didn’t take me no time // But that ain’t all, I lost my mind // in Oregon.”

(Peter H. Fogtdal is the author of twelve novels in Danish. His latest novel, The Tsar’s Dwarf , is available in English.)