Here’s a delightful Christmas tale to end off this year’s blogging. It’s about a plane full of Christmas mail, a pilot who wants to hurry home to his sick wife, and scores of enthusiastic Dutchman cheering on the Pelikaan as it made two record-breaking flights in December 1933.

Picture this: you’ve arranged everything to perfection and left nothing to chance. This is essential because you’re about to set off on a long journey with a new plane, carrying invaluable cargo: Christmas mail. But then fate takes a hand. An engine malfunction forces you to switch planes. 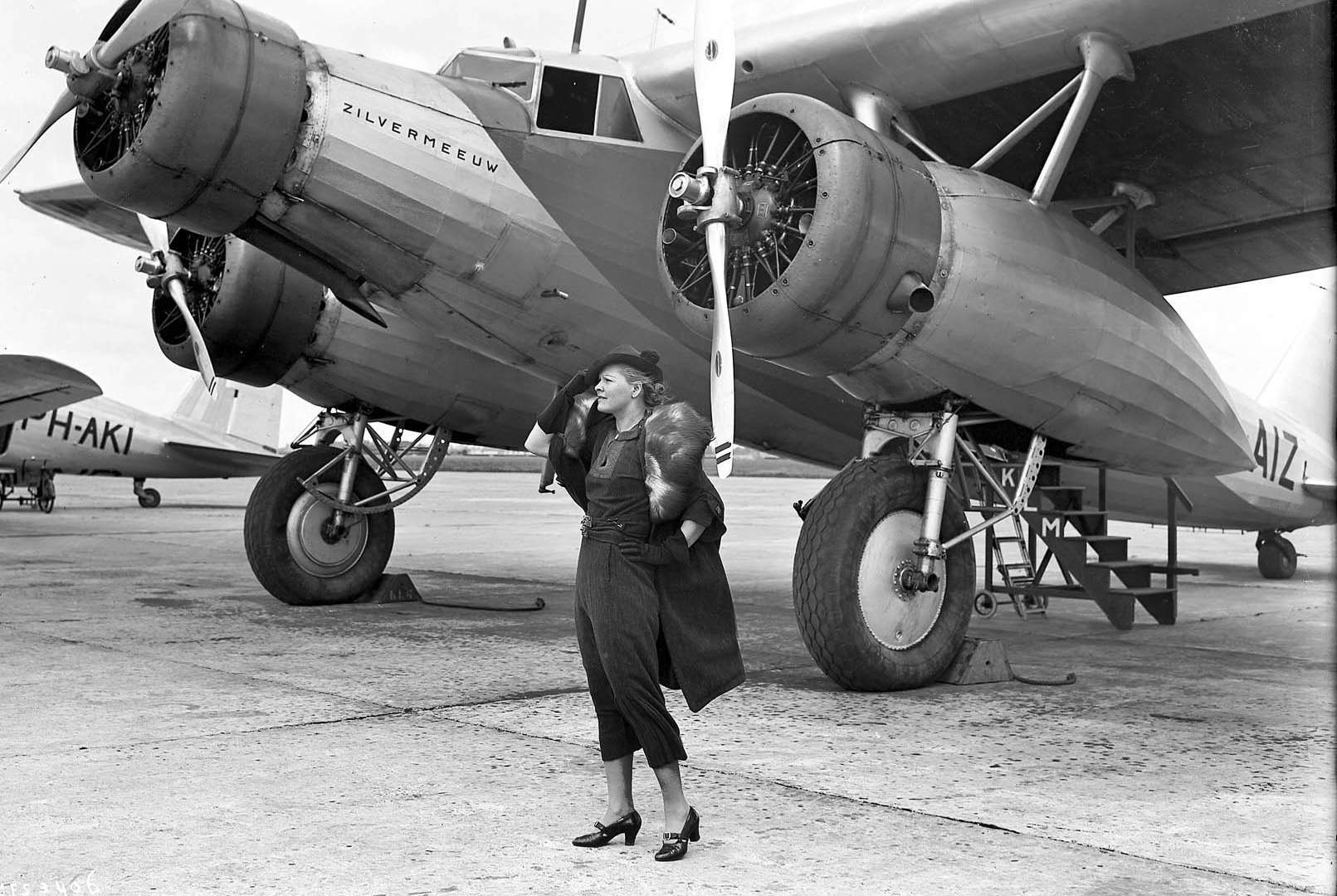 The Zilvermeeuw (Herring Gull) was one of a new generation of planes developed by Dutch manufacturer Fokker. Its innovative features included retractable landing gear and aerodynamic casing around the engines. In combination with the powerful engines, these features made it one of the fastest planes that Fokker had designed to date.

Expectations were high, which was why the Zilvermeeuw was chosen to operate an extra Christmas mail flight to the Dutch East Indies in December 1933. The crew, consisting of Captain Iwan Smirnoff, Co-Pilot Piet Soer, Radiotelegraph Operator Cornelis van Beukering and Flight Engineer Sjef Grosfeld, were ready to go.

From Herring Gull to Pelican

A large crowd had gathered at Schiphol Airport on 18 December 1933, drawn by the prospect of seeing this unique aircraft emerging from the hangar before setting off on its long journey to Batavia. It was important that everything should go as planned, because the Christmas mail had to be delivered on time and, with a bit of luck, there would be enough time for people in the colonies to send their replies back with the plane.

Things went wrong during the test run in the hangar. The engines suffered such a serious malfunction that it would have taken days to carry out repairs. There wasn’t time for that. You can imagine the disappointment, particularly among the waiting crowd outside the hangar. 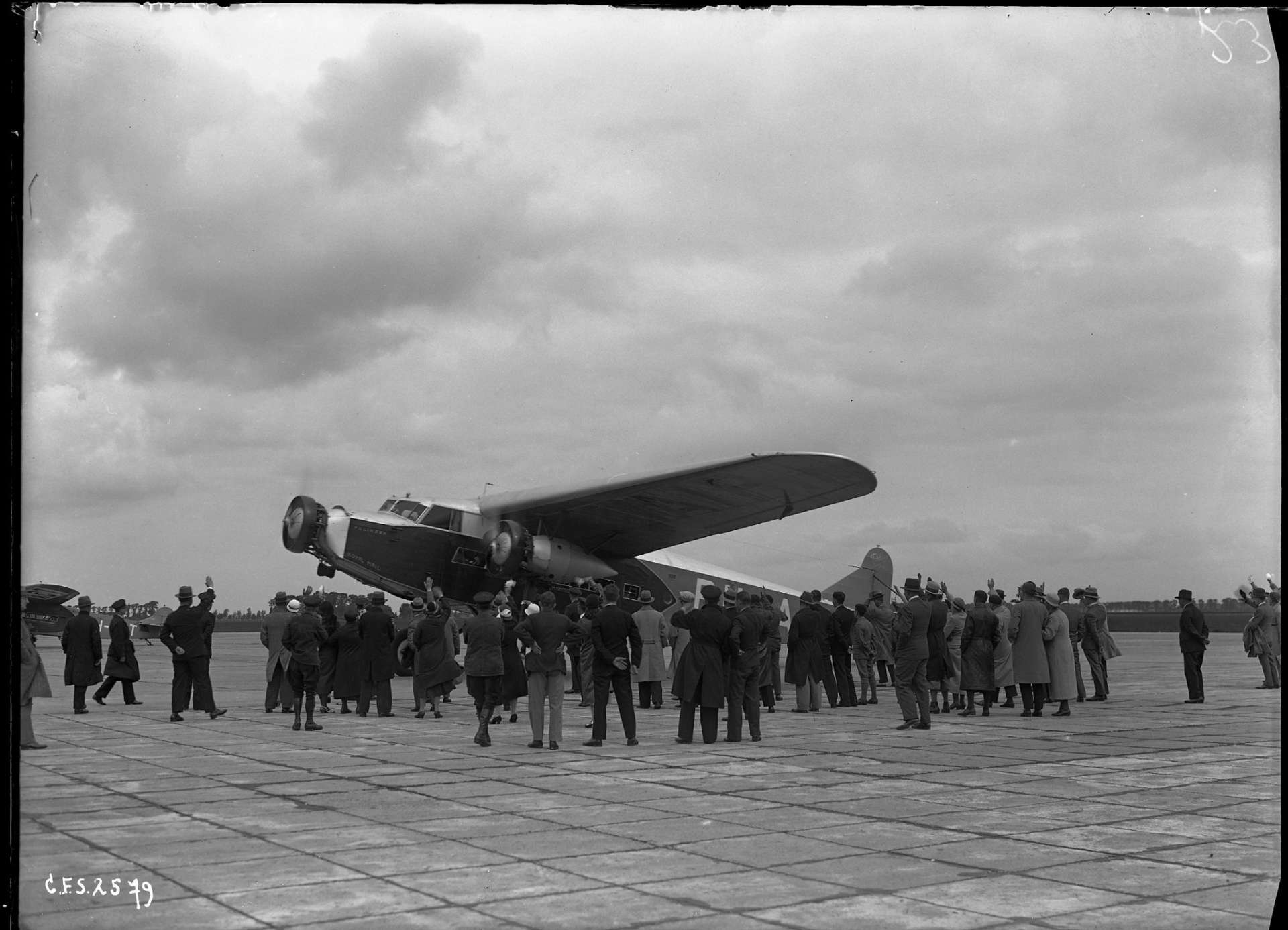 Following feverish consultation, it was Albert Plesman who took the plunge and opted to use the Pelikaan, which was ready and waiting to depart. This came as a huge relief for the waiting crowd. However, the Pelikaan was an F-XVIII with lighter engines and no one was sure whether it would be able to deliver the mail before Christmas. After the cargo had been transferred, Smirnoff and his men boarded the plane. The captain didn’t mind the switch too much. He had flown the Pelikaan before and had had some doubts about the Zilvermeeuw’s engines beforehand, because he knew that innovative designs often came with teething problems.

Staying awake, flying ever onward, the crew did their damnedest to ensure that the Christmas mail would arrive in Batavia on time. They knew it was going to be a challenge. They had to scrap the flight schedule drafted for the Zilvermeeuw, which had a top speed of 250 km/h, while the Pelikaan could manage only 190 km/h. To make matters worse, the crew lost their way between Rome and Athens, flying blind through heavy cloud for hours with iced up windows.

They eventually ended up in Thessaloniki, much further to the north. And the landing almost went wrong, with the Pelikaan only just avoiding a mountainside that suddenly loomed up out of nowhere. Fortunately, the weather improved after that, but there was mounting tension during the layovers, because the crew knew they were losing precious time. 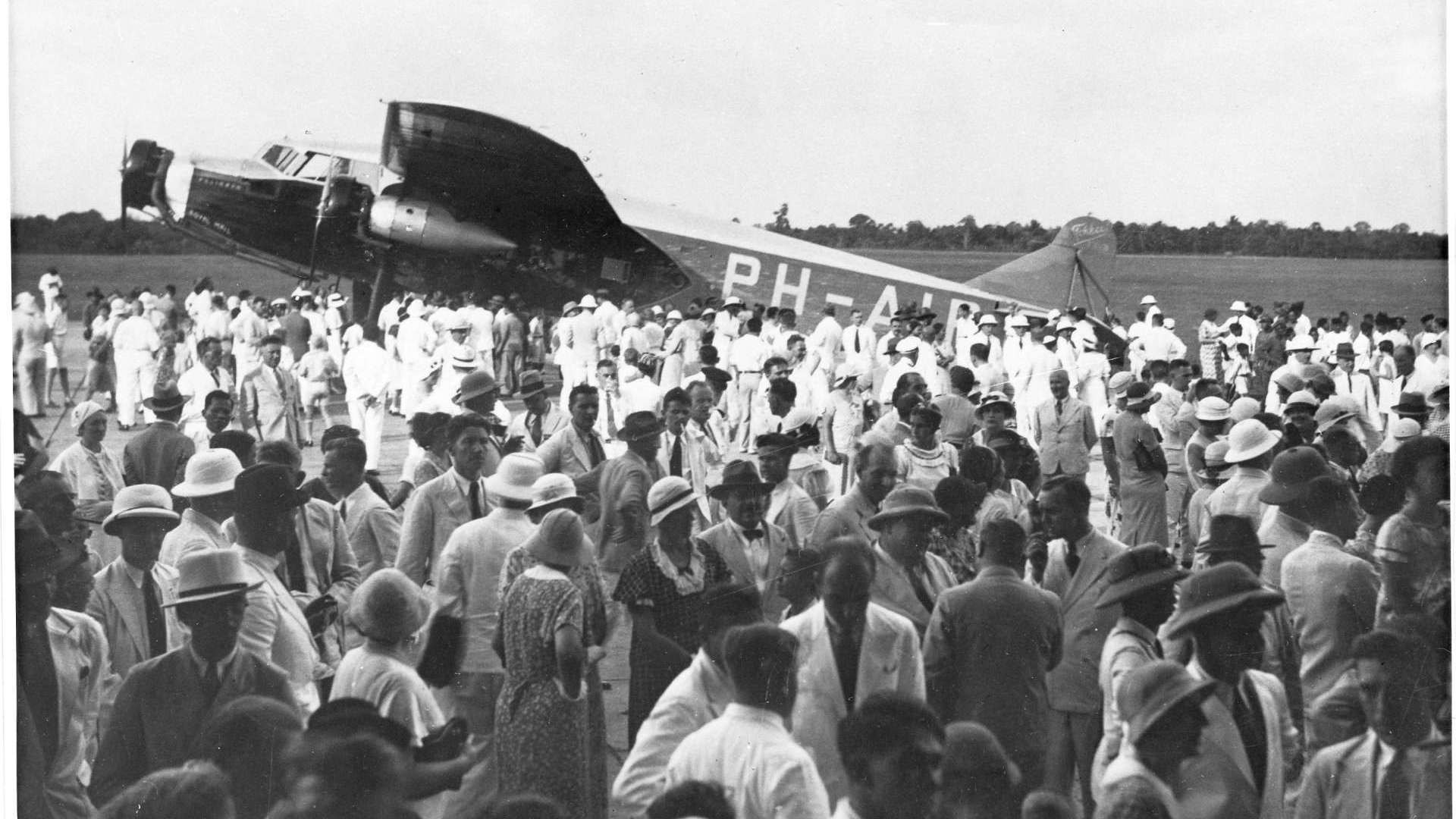 It was hard to stay awake listening to nothing but the drone of the engines for hours on end. And so the crew kept making coffee. And then they made some more. A lot of people turned out to greet them in Baghdad, but they couldn’t stop for long. It was refuel and go! They were exhausted by the time they reached Calcutta. Should they take a break? No, they kept on flying. It wasn’t until Bangkok that they stopped to sleep briefly. By the time they approached their final destination, all thoughts of sleep were banished. Adrenaline can work wonders.

On 22 December, after four days, four hours and 35 minutes, the Pelikaan landed at its final destination. A new record! The adulation was overwhelming. Smirnoff, Soer, Grosfeld and Van Beukering were welcomed at heroes. Showered with flowers, their triumphant parade was cheered on by thousands. They had made it! The mail had arrived on time, and there was 500 kilos waiting to be taken back home. But first they needed to get some sleep. 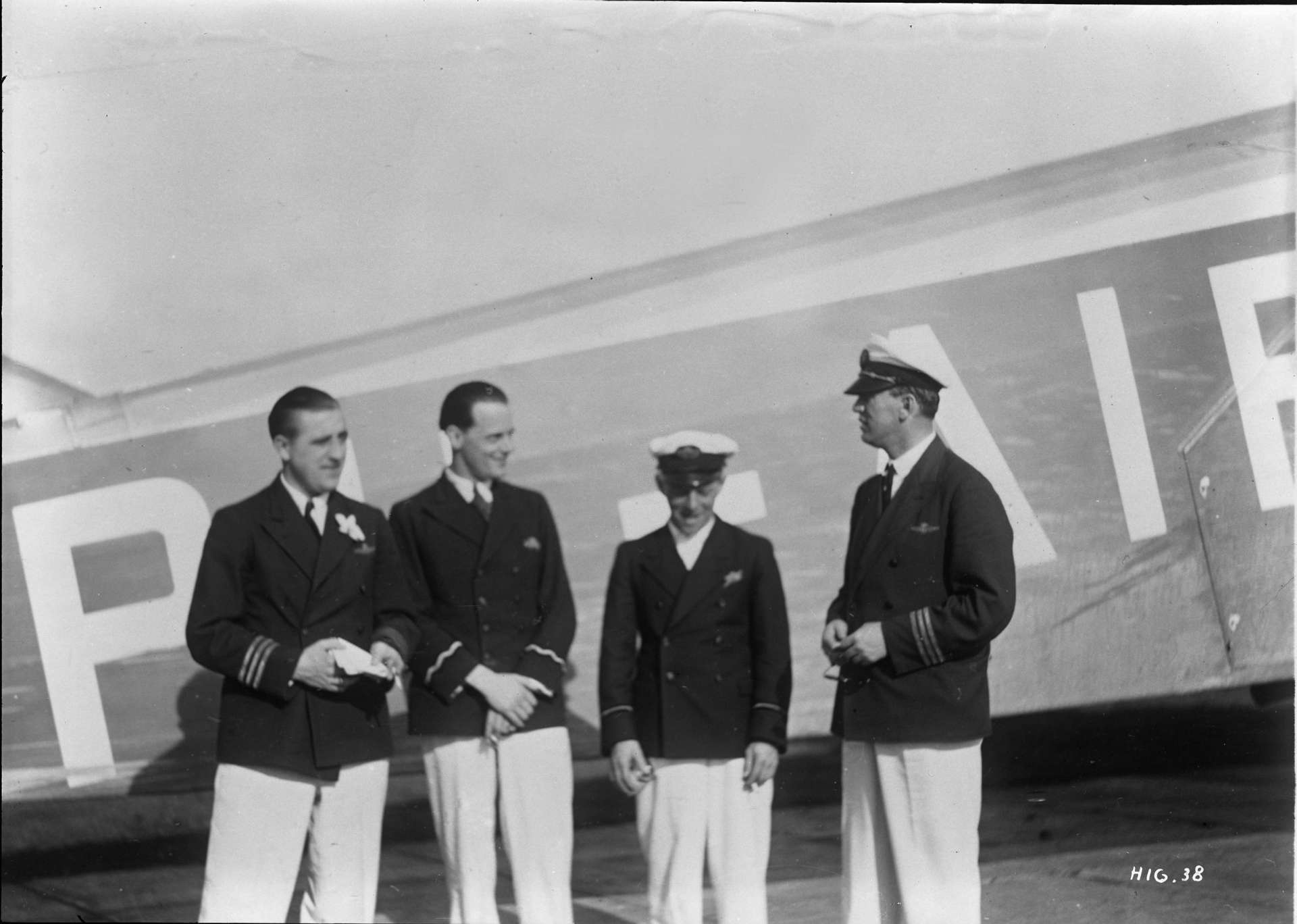 The Dutch national phone company kindly offered the crew an opportunity to chat to their loved ones at home. (This was quite a big deal back in 1933.) The crew gathered to receive their calls, but Captain Smirnoff didn’t get to speak to his wife Margot, as anticipated. Instead, he was called by a Dr Engelkens, who informed him that Margot had undergone emergency surgery. She had known that surgery was required, but had decided not to inform her husband, because she knew how important the flight was to KLM. Smirnoff was horrified, of course, but the doctor assured him that Margot was doing well, under the circumstances. Smirnoff didn’t believe him, but Engelkens reaffirmed that there was no need for concern, adding that Margot’s condition was improving.

On Boxing Day, 26 December, the crew finally headed home, flying as fast as the Pelikaan allowed. But they encountered headwinds along almost the entire route, which meant there was little time for rest. In addition, the crew felt it was their professional duty to match the new record they had set. But that was well-nigh impossible considering the circumstances. As is so often the case, the final stretch was the most arduous, with the crew encountering mist as well as wind. Meanwhile, thousands of people were gathering at Schiphol. They wanted to welcome a plane that had taken off on the other side of the world less than 100 hours before. 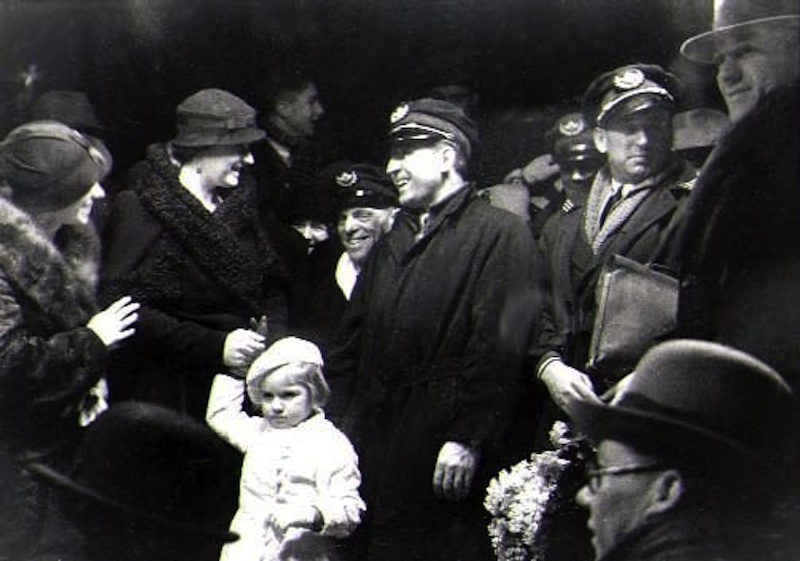 The Pelikaan eventually landed at Schiphol on 30 December. It was almost 1934, mid-winter, and the landing was dicey. A tailwind buffeted the plane, forcing Smirnoff to abort the landing and go round for a second attempt. When the clouds opened up, Smirnoff had a clear view of the well-lit airstrip at Schiphol and landed the plane perfectly. Having held their breath, the 20,000-strong crowd roared not only relief, but also because the crew had succeeded in beating their own record by 10 minutes. Their feat was reported on the radio, allowing people across the country to share in the excitement and drama. Smirnoff could finally head home to his wife’s bedside, with the entire country celebrating their reunion.