Roland was one of the first people I met when I arrived in Amsterdam in the mid-1980s. We have been friends for almost a quarter of a century. Roland showed me the Dutch countryside, pointing out birds and plants as we cycled to the beach. We played football together several times a week and made music together whenever there was a guitar nearby. Roland is the kind of guy who always took the scenic route to football matches. He preferred to cycle to distant clubs, his battered orange bag perched on his handlebars, and he would be waiting for us when we arrived by car. In short, Roland was eco-friendly long before the term was coined.

He was studying political science and Spanish when we met, and it was his love of Spain and the great outdoors that brought me to the Pyrenees, which we explored on foot from east to west over the course of twenty years. As I write this, I realise he has long been my guide and, yes, sometimes even my moral compass. And because he remained a bachelor for many years, jealously guarding his independence, he was usually available to go out for a drink or to lend a helping hand when furniture needed lifting or walls needed painting. He is the kind of friend we all need. 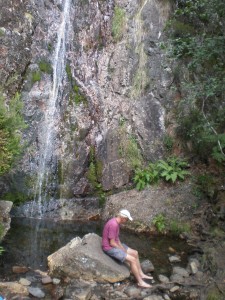 Roland in his beloved Pyrenees

But then he moved to Spain. To be with Ana, whom he has known even longer than he has known me. They met on one of Roland’s first trips to Spain and regularly reaffirmed their friendship over the years. You could say it took them almost three decades to fall in love. Ana moved to Amsterdam to be with Roland, but after a year they decided it would be better if Roland moved to Spain, mainly because he spoke Spanish, but also because the average temperature was higher. He followed his heart and his friends could hardly object, because we knew he had given this relationship plenty of thought.

Rolando de Corazón, as he is known to his friends, has been away for three years now. Fortunately, he returns to Holland at least once a year, and he keeps us updated on his life in Spain via his blog in Dutch and Spanish.

That said, I decided it was high time to celebrate our friendship and Roland’s love of Spain by asking him to share his favourite sight, sound, scent and taste in Madrid. Ana checked his Spanish and she features in one of his preferences, so I guess he won’t be returning to Amsterdam anytime soon. Not in winter, anyway.

Scent: “El jabón tradicional que todavía utilizan algunas personas mayores” – Could Roland be referring to the scent of a traditional soap that is used by elderly people only?