From the comfort of Bristol to a slum on the outskirts of Manila where families live in nothing more than cardboard boxes might seem a long way to go for a day but as students at the University of Bristol completing a jailbreak challenge run by the charity society ‘RAG’ (Raising and Giving), it was a life changing experience. 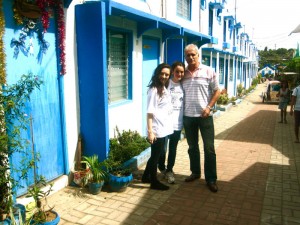 As part of ‘Jailbreak’ we, Laura Cavaciuti and Saoirse Linder had to get as far as we could from Bristol in 36 hours without spending any money. We contacted a few airlines in hope of being sponsored and were pleasantly surprised when KLM and Air France Airlines responded and offered us two round trip tickets to Manila — where we would fly from Bristol to Amsterdam and then on to Manila, and work with the people there for 24 hours before coming back. Through using social networking sites such as ‘Facebook’ and ‘Twitter’, we asked friends and family to donate money to the KLM and Air France Village in Bagong Silang. In 2009, KLM in the Philippines joined the Gawad Kalinga charity in its mission of building communities to end poverty in the country.
Gawad Kalinga and Air France KLM have been working together over these past couple years and have built over 45 houses in the village of Bagong Silang, Caloocan City. Together they have proven that changing a community from this extreme poverty into a normal community is possible. They have changed the worst slum of Manila into a sustainable community where many of the people now feel safe, have a normal life with a concrete house, roof, kitchen, bedroom. The local society completely changed and the crime rate dropped by 70%.! However many people are still in need of a home, of support, and of help. 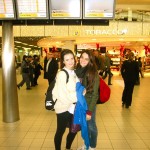 And so in the early hours of Saturday the 19th of November our journey began, with the help of a friend, we were driven to the airport and at approximately 6.30 am our plane took off and we were so excited to begin what will always be one of the most enriching and life changing experiences of our lives.
Keep updated on this page – we will be posting two more blogs – one about our time spent in the Philippines, and the last one will cover our reflections on this whole experience, as well as the fundraising process. We have almost raised enough to build a whole house!

To help us reach our goal, please donate.

Laura Cavaciuti, 19, was born in Milan, Italy and moved to Paris, France at the age of 4.  She is a dual national  Italian/USA – her father is Italian, and her mother is from the United States.
She calls herself a people person – intrigued by their stories, problems, and the greater issues that link people to society and society to them.
That’s why she has chosen to study Sociology, and is very proud to have been awarded a place at the University of Bristol. She is in her first year.
Laura is fluent in English, Italian, French and Spanish. In fact, her IB Extended Essay researched how multilingualism affects an individual’s interpretation and expression of emotion. She knows that multilingualism, and multiculturalism, are extremely important tools in building self-identity, relationships, and power structures. Laura has great interest in how society treats children. In high school, she was President of her school’s Romania Club. This club supports the Fundatia Innocenti at the Rusescu Children’s Hospital in Bucharest. Laura spent time there over 2 years on school holidays to help socialize the children, giving them a better chance at adoption.
In the future, she sees herself as an advocate for vulnerable children or those with learning difficulties.
For these very same reasons, she was immediately attracted to the opportunity of helping Gawad Kalinga through the KLM-Air France corporate initiative in the community of Bagong Silang, Caloocan City, Manila.
She and her her team mate, Saoirse Linder, have raised over 1000 pounds to build a house. Thanks to KLM-Air France, they were able to travel to Manila to tell the people of their commitment in person. They are determined to continue spreading information about the project and helping in any way they can.

Saoirse Linder was born in London on the 11th of October 1991. When she was nine her parents, Seth and Deirdre Linder, moved her to a small village in Northern Ireland so she and her sister could receive a better education. Saoirse’s parents have always been interested in what was happening around the world and her father, a journalist, wrote several articles on development projects in Asia. As a young child Saoirse has a clear memory of him describing a trip to the northern territory of Pakistan to report on an Aga Khan Foundation project there. Even at that age she was struck by both the poverty he described in the general area and the success of the projects that the Aga Khan Foundation had in place to help these communities look after themselves. After taking a gap year Saoirse began a four-year degree course in Sociology at the University of Bristol in November 2011. Saoirse states that her choice of course reflects her interest in social justice and the impact which inequality has on communities around the world. She described her journey to Manila as an extraordinary experience which will always stay with her. Like the project her father described when she was a child, it demonstrates the huge difference to people’s lives such projects can make and has made her determined to continue to help this project and others as much as she can.