On our way to and from the aircraft, we are regularly stopped by passengers asking all sorts of questions. I’m always relieved when someone’s asking the way to a certain gate, the KLM Crown Lounge or a transfer desk, as those locations are printed in my mind. But unfortunately there are not many questions that I’m actually able to answer. 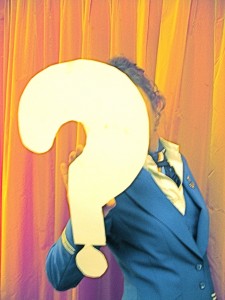 I used to wonder what makes people think that I would know where to get the best deal on a camera at Schiphol airport, what the minimum stake is at the airport casino or how much time it will take to get from gate A11 to B3 at Guangzhou Baiyun International Airport.

But I started to realise that I frequently assume that other people know everything as well. For example, due to my lack of a sense of direction, I get lost in foreign cities quite often. Once I’ve given up hope of finding my way back on my own, I will ask whoever I run into. But what makes me think that someone who’s walking in, let’s say, Manhattan is really familiar with the place and also knows the way to one of those numerous New York hotels? Curiously, I tend to pick people who are lost themselves.

I think hotel receptionists win first prize when it comes to being asked unexpected questions. The other day I was checking out the bus schedule at reception while my colleague was asking advice about the best tailor in town. At the same time, a lady on the other side of me was asking what would be the best way to spend the afternoon for her and her elderly, disabled sister. As I walked away, I overheard the couple that was in line behind me asking the receptionist which restaurant he would recommend for celebrating their fifth anniversary.

So I made up my mind to never ever wonder again why people ask me certain questions. They just give it a try, like we all do.