The thought has sometimes crossed my mind – after being awake all night on a full eight-hour flight –if only I could lie down, just for a moment… alas, it’s not to be. A bed for every passenger would make air travel prohibitively expensive. Yet, there are beds on aircraft, but only for the crew. If a flight lasts longer than 10.5 hours, crew are legally obliged to rest. This is for everyone’s safety.

When I first heard about onboard bedrooms, I had an image of something like this: 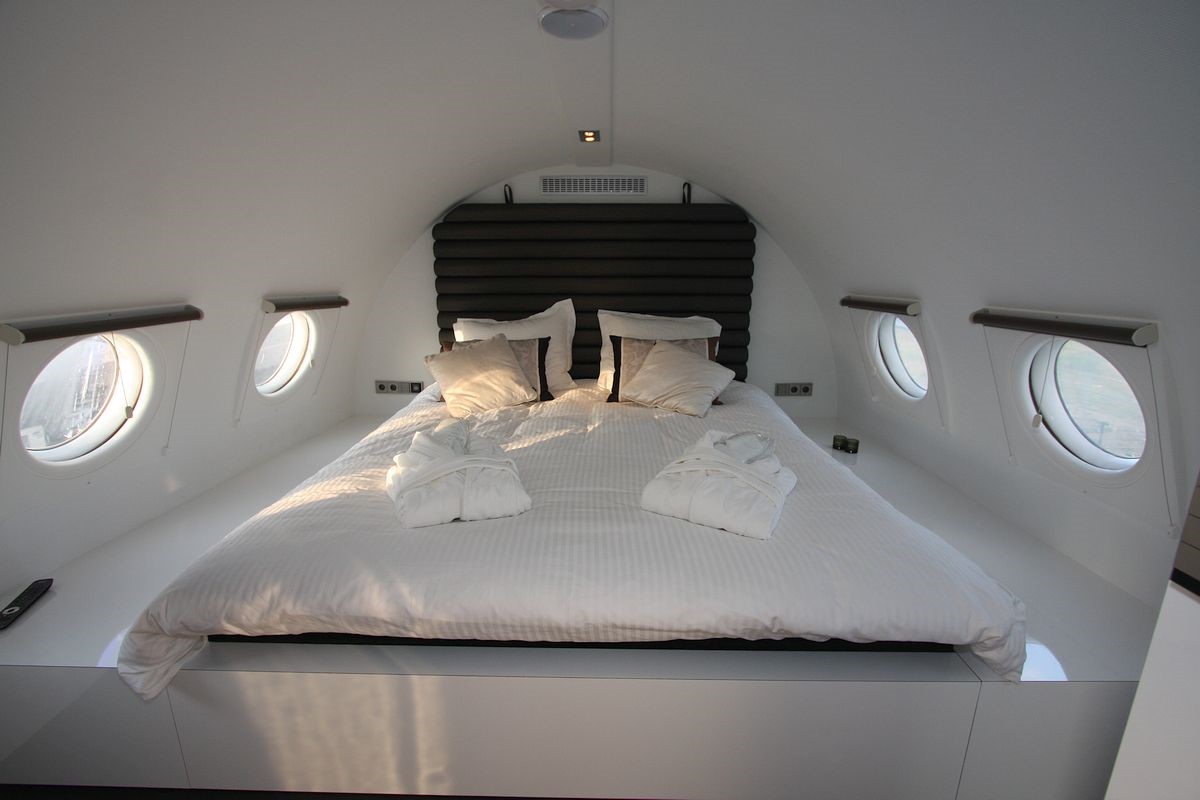 But, it seems, this is closer to reality: 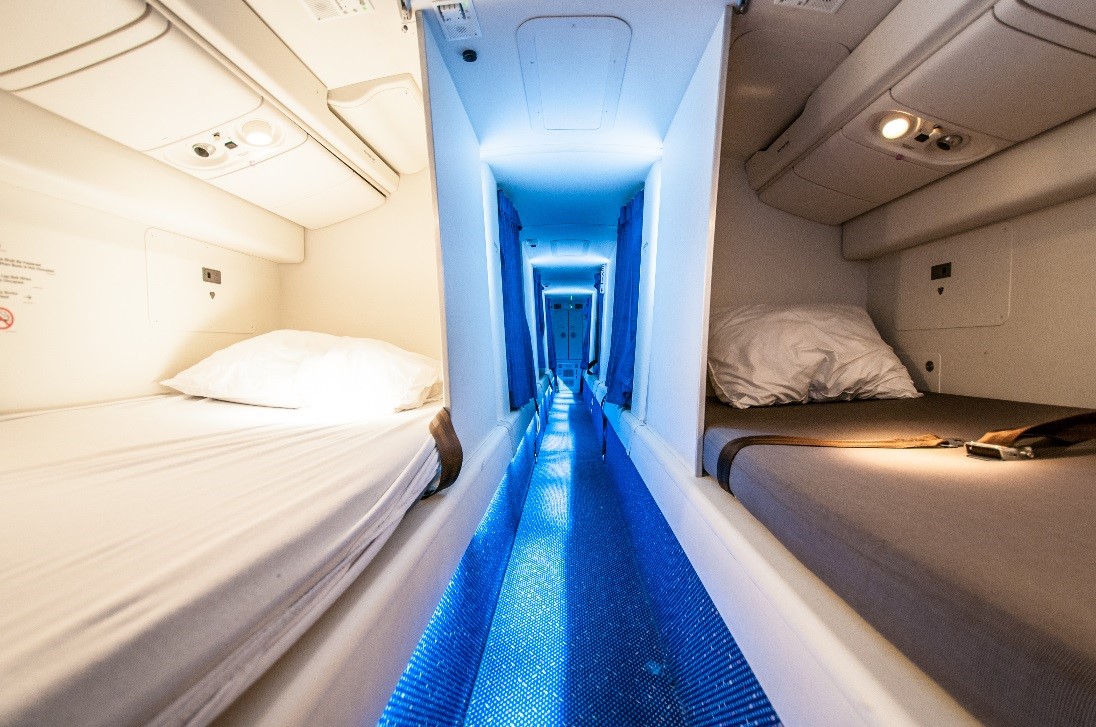 Safety operations manager, Richard Swart, knows all there is to know about onboard aircraft safety, because he’s also a cabin attendant. As such, he sometimes finds himself in Overhead Crew Rest (OCR) – definitely the right man to answer my questions about aircraft bedrooms.

Why are there crew bedrooms (OCRs) onboard?

KLM has OCRs on the B747, B777 and the B787. This has everything to do with the long distances these aircraft fly and the duration of the flights. Airlines have to comply with duty and rest regulations. The collective labor agreement rules, which are based on these regulations, state that a person may only work eight hours at a time.

This is a complicated, technical area, but it comes down to this: the crew has to rest during a flight lasting 10.5 hours or more. The crew changes shifts during the flight so that everyone gets enough rest to guarantee onboard safety. 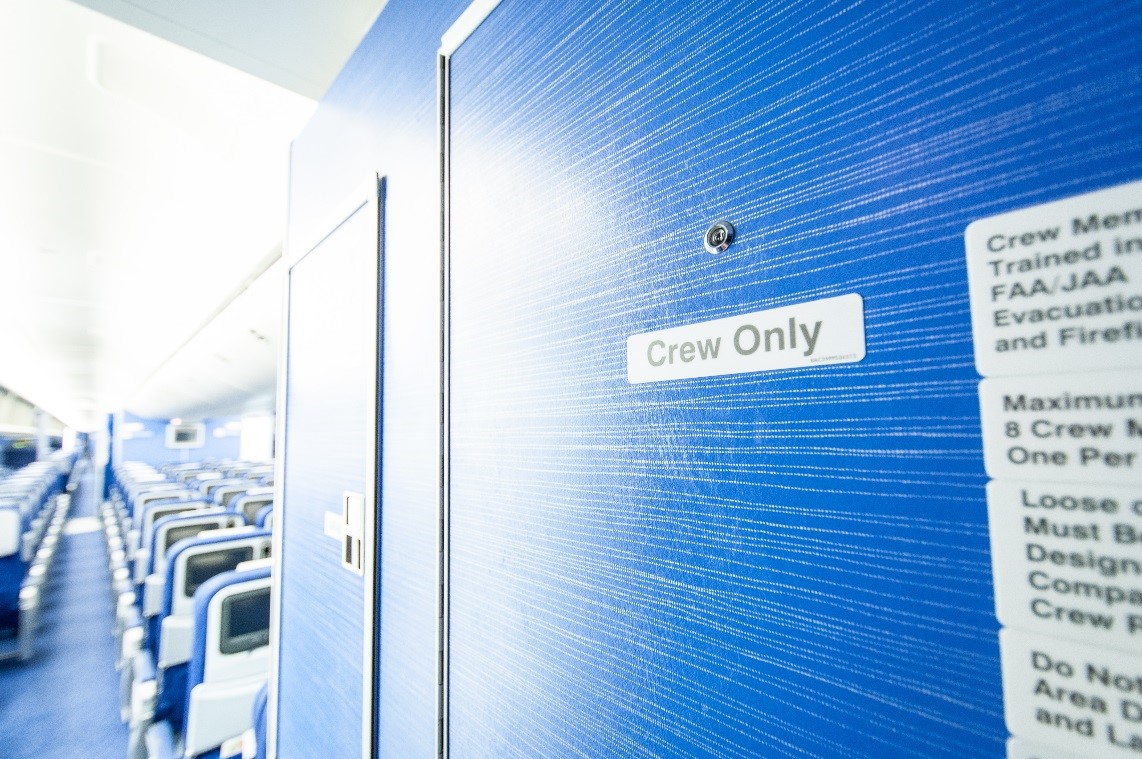 There is a maximum of eight beds in the OCR. KLM provides pyjamas and bedding. The beds (or bunks) are 70 cm wide, have two reading lights and are about 1.95 m long. The location of the OCR is decided by the manufacturer in consultation with the airline. Boeing presents KLM with the options from which it can choose.

The bedrooms in KLM aircraft are usually overhead, above the cabin, hence Overhead Crew Rest. Other airlines choose to put the rest areas in the belly of the aircraft, in which case they are called Lower Crew Rest (LCR). Cockpit and cabin crew have separate OCRs, because their sleep schedules do not coincide. 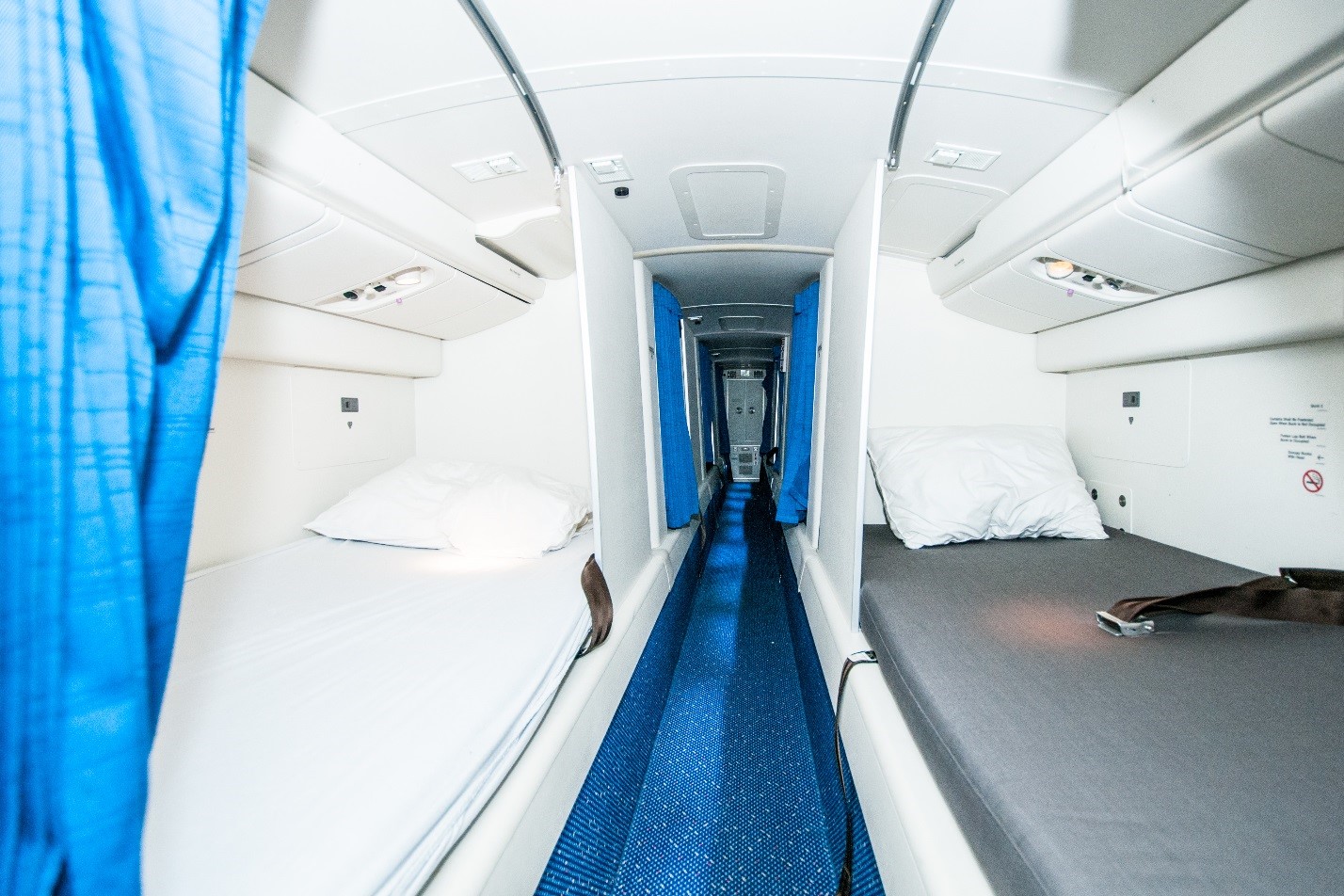 Is there a sleep schedule, then?

Indeed. The purser draws up a roster of two shifts. The Crew Assignment Movement List states who is working in the galley and which colleague will sleep first. You get between 1.5 and 3 hours rest, depending on how the onboard service goes and the duration of the flight.

Do you prefer to sleep during the first or second shift?

I prefer to go first. I don’t really like waking up just before arrival, when you have to deliver the final services at top speed. This is usually the passengers’ breakfast. It takes me a while to get my face into shape after a sleep, so I much prefer the first shift.
Funnily enough, I also have a favorite OCR. In the Boeing 777-300 the OCRs are at the back near the tail. This is the spot where you feel the aircraft moving most, so it kind of rocks you to sleep. Some of us really like this. 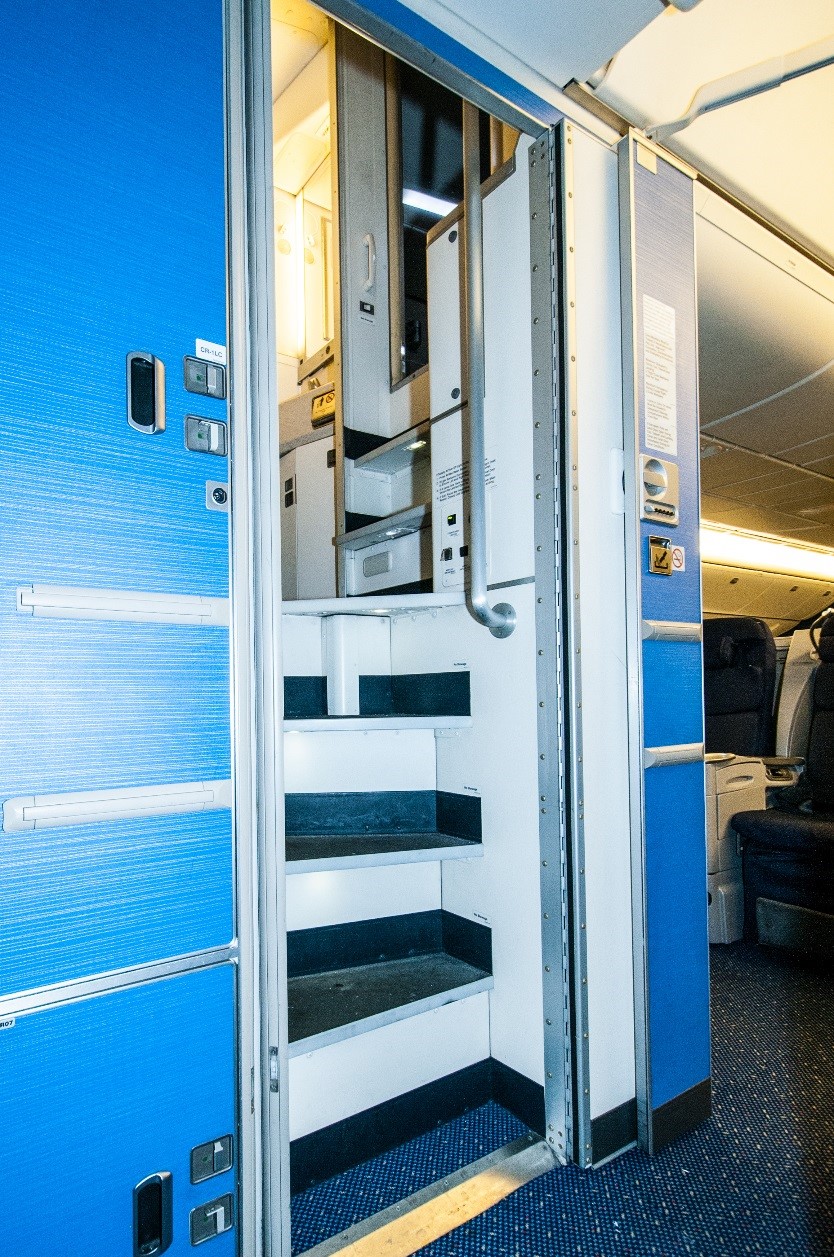 Everyone, of course, wonders whether anything ever happens in the OCR?

Romantically, you mean? No. If you see the space, you soon realize there is nothing romantic about the set up. Peace and quiet is sacrosanct in the OCR. Colleagues have to be quiet as mice when they go in and out of the space. Occasionally a pilot might communicate flight information over the public address system but forgets to turn off the speakers in the OCR. Of course he or she than has to buy the first drink at arrival.

Are there any rituals around changing shift?

There are always KLM pyjamas laid out on the bed. These are compulsory, because crew members have to be recognizable at all times in case of an emergency.
Waking colleagues up is usually done very tenderly – a cup of tea, fruit juice, a hot towel to wipe your face. 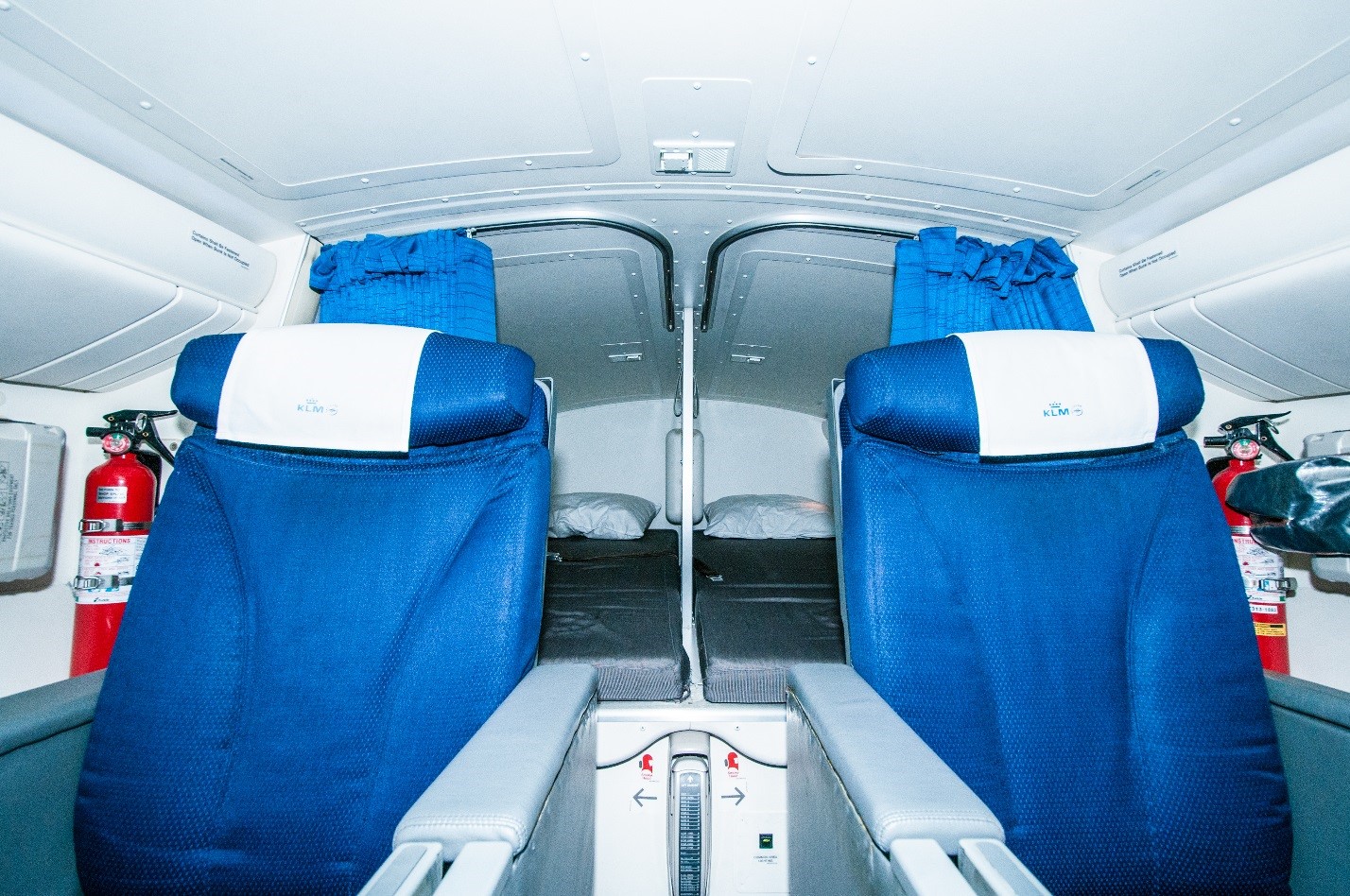 What about your own safety? And are you relieved of safety duties during your rest?

There are always enough crew members on board to guarantee safety. Occasionally it gets bumpy due to turbulence. Every bunk has a safety belt, just as every seat does. The safety belt is always closed, even when sleeping, that way I don’t have to look for it in my sleep.