Every business has a logo nowadays. But there was a time when the importance of such things as branding wasn’t as clear as it is today. That was certainly the case at KLM. We reached a turning point in the autumn of 1963, when we launched a new logo that has gone almost unchanged to this day.

At its establishment, KLM adopted the so-called “finch logo” designed by architect Dirk Roosenburg. This winged shield bore the intertwined letters K, L and M, as well as a crown, proudly reflecting KLM’s royal designation. However, as was the case at many other companies at the time, the logo wasn’t always uniformly applied. Moreover, the concept of a “house style” had yet to be adopted. In short, there was no real vision in terms of recognisability, nor the way the logo and colours were to be used. Sometimes the finch logo was used, sometimes it wasn’t, and sometimes the letters “KLM” were used on their own. This is clearly borne out by KLM-branded materials dating from the early years. 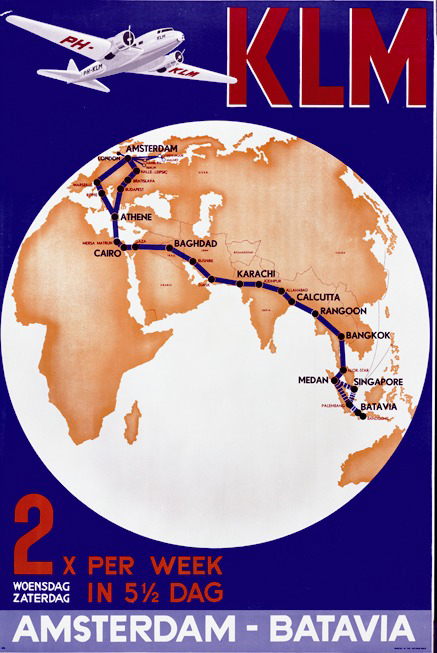 After the Second World War, the logo and colours were more uniformly applied, partly because the Dutch tricolour was emblazoned on the tails of KLM aircraft. At the time, the finch logo was placed within a so-called “ball-and-stripe” pattern. Over the years, it became clear that the use of such standard elements enhanced recognisability. In 1958, this growing insight prompted the KLM Design Department to research how even greater recognisability could be achieved. This resulted in a recommendation to design a new logo that was more easily readable and could be incorporated into a house style, ensuring that the KLM brand reflected the company’s qualities. This idea was not fully embraced by the entire KLM organisation, but all that changed in 1961.

In that year, the legendary ad man David Ogilvy was approached to research KLM’s image. The results indicated that KLM scored high on “cleanliness, punctuality, hospitality and friendliness”, but that “technical capability” and “modernity” could do with some emphasis. KLM subsequently positioned itself as “reliable” and was advised that it could enhance this quality with a new, strong logo.

The KLM board heeded this advice and contracted the British designer F. Henrion (1914-1990), who came over from London to meet with the board and other relevant departments at the KLM head office in The Hague. Having listened closely to their ideas and requirements, he returned to London to design the logo in 1963. Henrion later recounted that he began making preliminary sketches of the now oh-so-familiar KLM logo on a serviette on the flight back home. He went on to present a modern logo, in which the crown was combined with the letters KLM.

The sheer simplicity of the new crown design – which was little more than a stripe, four dots and a cross – made it eminently recognisable for viewers, allowing them to spot KLM at a glance. To ensure maximum recognisability, Henrion actually turned the image of the crown “inside-out”, with the four dots representing the open space in a traditional crown. This was contrary to the previous logo, which had depicted the crown in its traditional form. This conversion of the image not only made it much clearer and very easily recognisable in both larger and smaller formats, but also ensured that it was easily visible in poor weather conditions. An ingenious design.

In 1964, the logo and new house style were officially introduced in a “house-style manual” that was distributed throughout the KLM organisation, worldwide. Even today, Henrion’s crown design remains a strong logo that continues to underscore KLM’s royal designation.